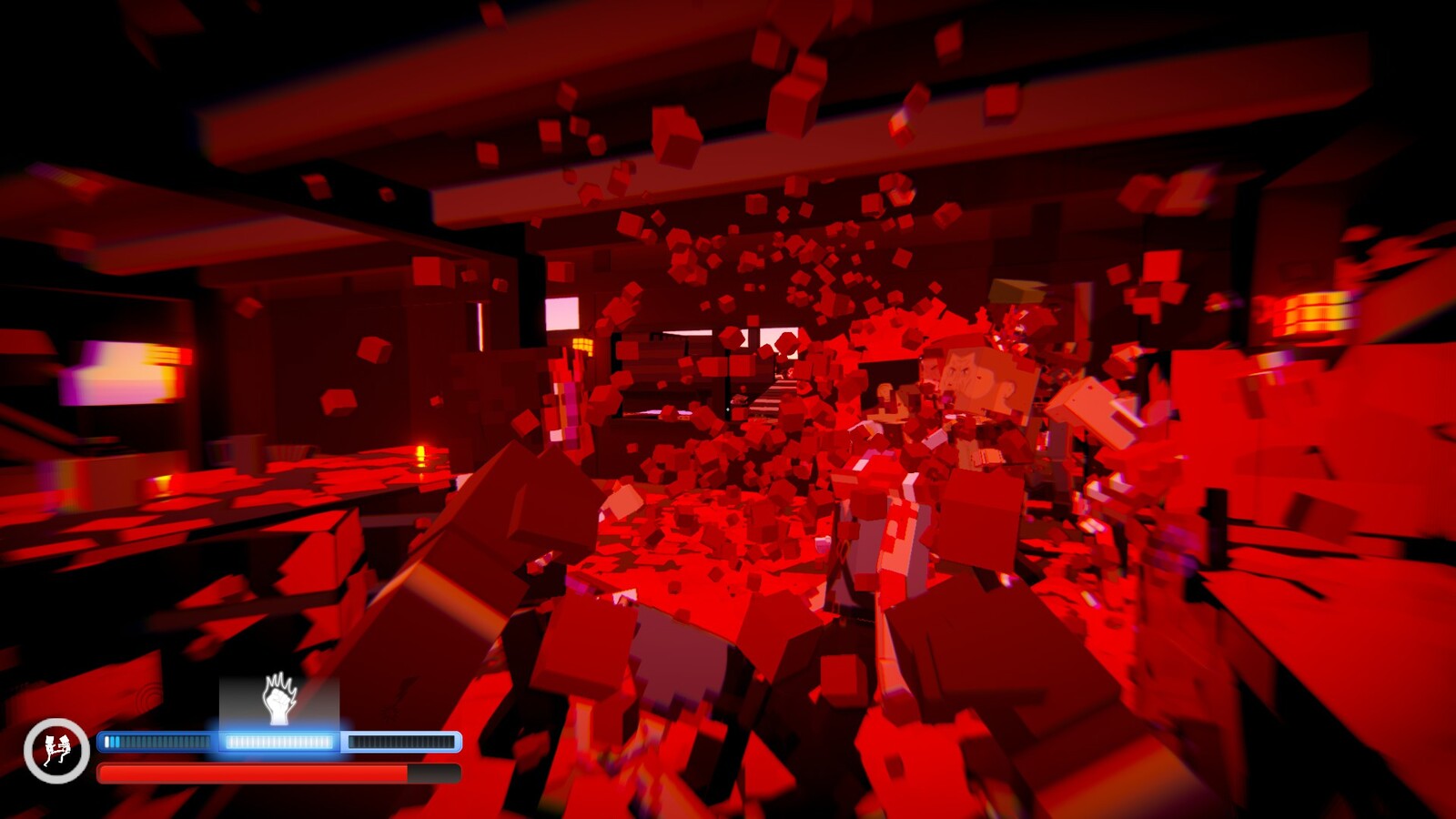 Anyone who knows me knows that I’m all about narrative-heavy experiences; I feed on stories and thrive on new perspectives. But that itch—that occasional yet unbearable itch for a good dose of gratuitous action—it’s inescapable. Sometimes, I owe it to myself to push my beloved story-driven games to the side and engage in some pure, unadulterated “dumb” fun. Enter Paint the Town Red, the pinnacle of ceaseless, contextless voxel violence. The game first punched, kicked, and sliced its way onto the scene six years ago, and since then has seen myriad additions to become the beast it is today. It was released in full this past July with a host of new modes, challenges, and head-popping toys.

At its core, it’s adrenaline-pumping action with super satisfying hits and improvisational combat. Its quirky, blocky look highlights the absolute absurdity of its premise and provides a clean canvas on which players can, well, paint red. Crunchy hits are followed up with fountains of blood and voxel chunks while a rip-roaring score feeds you more and more energy. Embellishments from a dynamic soundtrack that ducks in and out in response to your actions to its simple yet satisfying dismemberment system do wonders for the game feel. Every single action you take is rewarded handsomely. 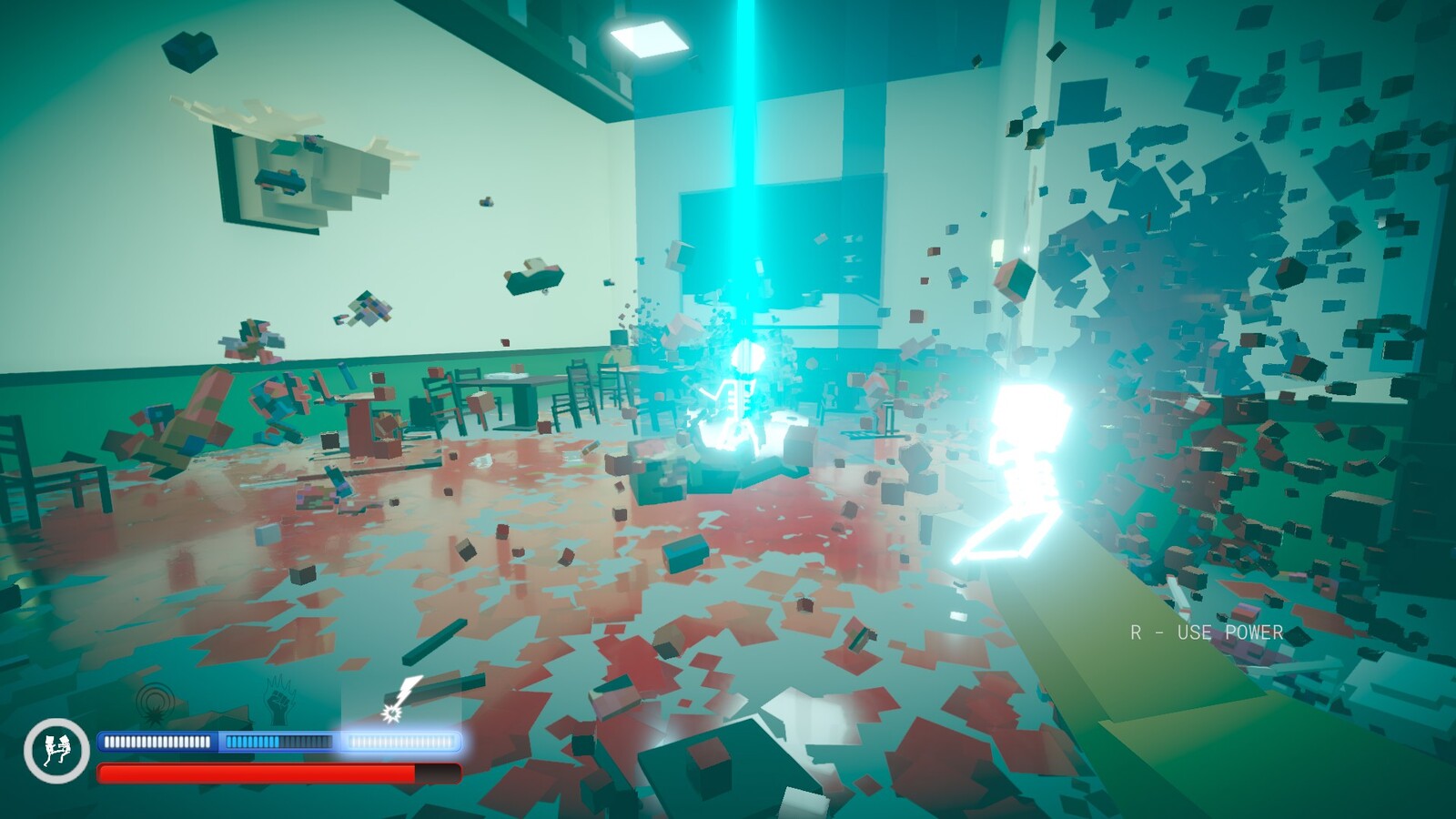 Paint the Town Red directs most of its efforts towards tightening the moment-to-moment gameplay. The mechanics themselves are pretty barebones, limited to light and strong basic attacks, a kick that knocks combatants back, and a throw. The combat’s claim to fame is in how players can take advantage of their surroundings—quite literally picking up anything in their vicinity to use as an impromptu weapon. Chairs, cups, and everything in between can be leveraged to push back the mob, each with its own durability, range, and damage. Dishing out pain generates power, which you can spend to unleash special moves to thin the ranks. My personal favorite is Berserk; slowing down time and causing bloody voxel explosions with your fists can never get old.

The Scenario mode presents a handful of curated, themed levels that sport the most exhilarating gameplay out of all the modes. Weapons and enemies of different types are strategically placed around the space in a way that maximizes chaos. Your goal is to down the dozens of fighters in each scenario before your health hits zero—much easier said than done. Enemies, especially enemies with weapons, deal massive damage, so learning how to effectively kite and position yourself becomes the key to a flawless fight. Once the first T-bone steak gets tossed, Paint the Town Red has no problem locking you into a blood-fueled flow state. Maintaining that balance of challenge and absurdity proves to be a little tougher.

Scenarios nail the flow in the first half, but the energy tapers off in the second. It’s easy to expend your arsenal earlier on, and they don’t have enough tricks up their sleeves to keep the excitement going. When all the quirkiest and strongest weapons have been spent and the map has been reduced to ruins, all that remains are your two fists, two dozen enemies, and a paltry selection of props. The possibilities shrink dramatically with every passing minute until you’re left kiting and kicking to close the fight out. 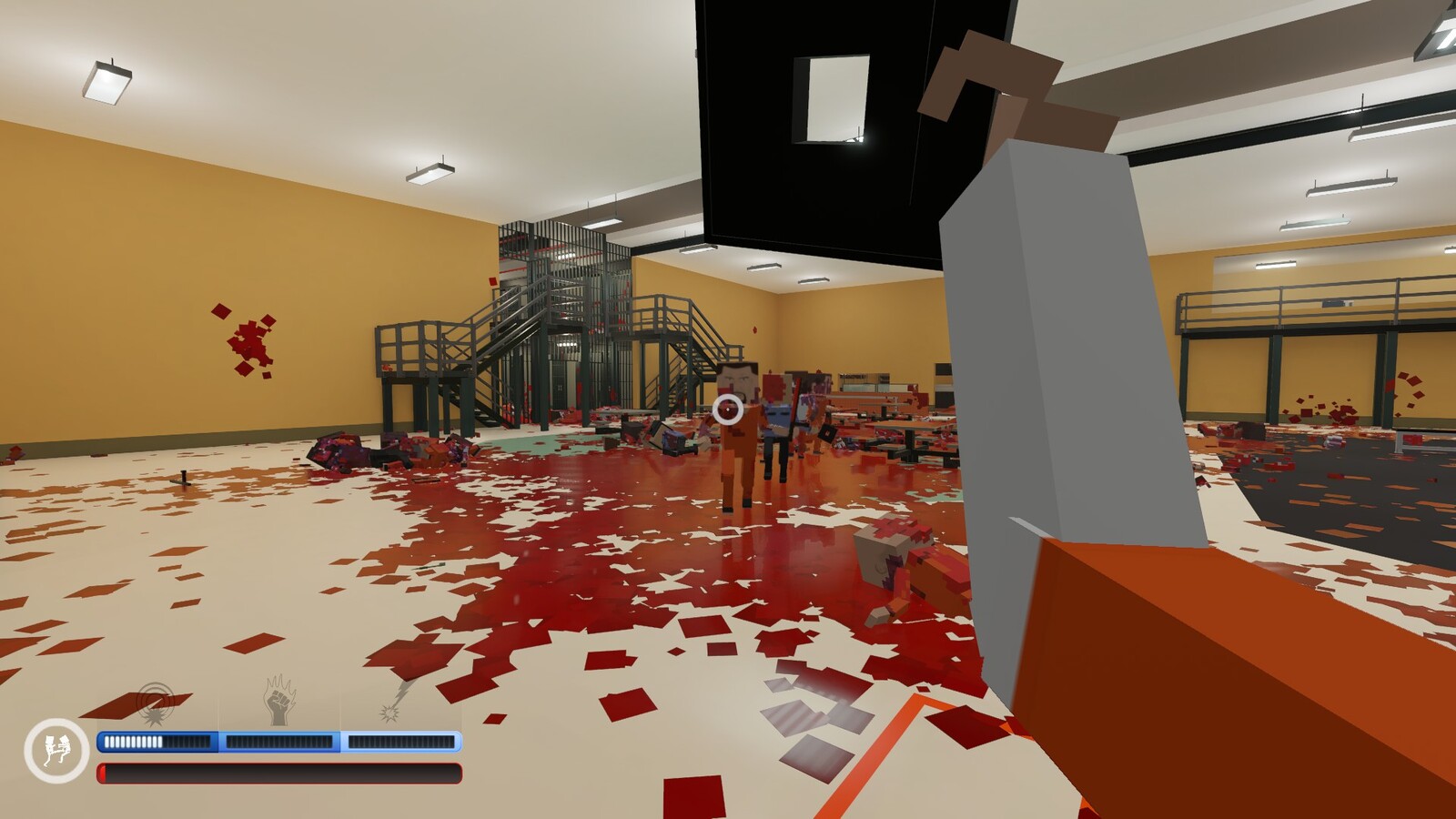 Playing catch with the homies.

Each scenario is treated like a puzzle, tricky challenges for you to run over and over, iterating each time until the perfect route is ingrained in your fists. But the map layouts themselves feature few viable spaces that aggregate action, while most of the side paths and areas are dead ends that never wrap back to the main areas. And, in an effort to keep the mayhem going, Paint the Town Red funnels enemies into the room you’re in if you’re running low on adversaries. Unless fighting ten people in a broom closet sounds ideal to you, you’ll rarely see the need to take the fight outside of the main areas—not like there was much in the other rooms that you’d be missing. In the prison scenario, entire wings of the map are devoid of enemies and potential weapons. Meanwhile, my favorite scenario, Pirate Cove, offers up new level-specific hazards, interesting spaces, and a healthy amount of weapons stashed in myriad combat-ready locations.

At its worst, Scenario mode is a reminder of Paint the Town Red’s untapped potential; at its best, it’s a showcase of some of the most engrossing combat to ever grace the medium. As I went down the list of modes, the game began spotlighting different facets of itself that I overlooked, though I couldn’t help but feel like the essence of the game was slipping away. Arena mode focuses on more specific challenges completed in series. There are several different sets of challenges all forcing you to adopt a more calculated playstyle. The challenge is welcome, and I appreciate the mode for bettering my game smarts. But, such stringent rules and limited resources stopped me from doing what I really wanted: letting loose and reveling in the audiovisual chaos. 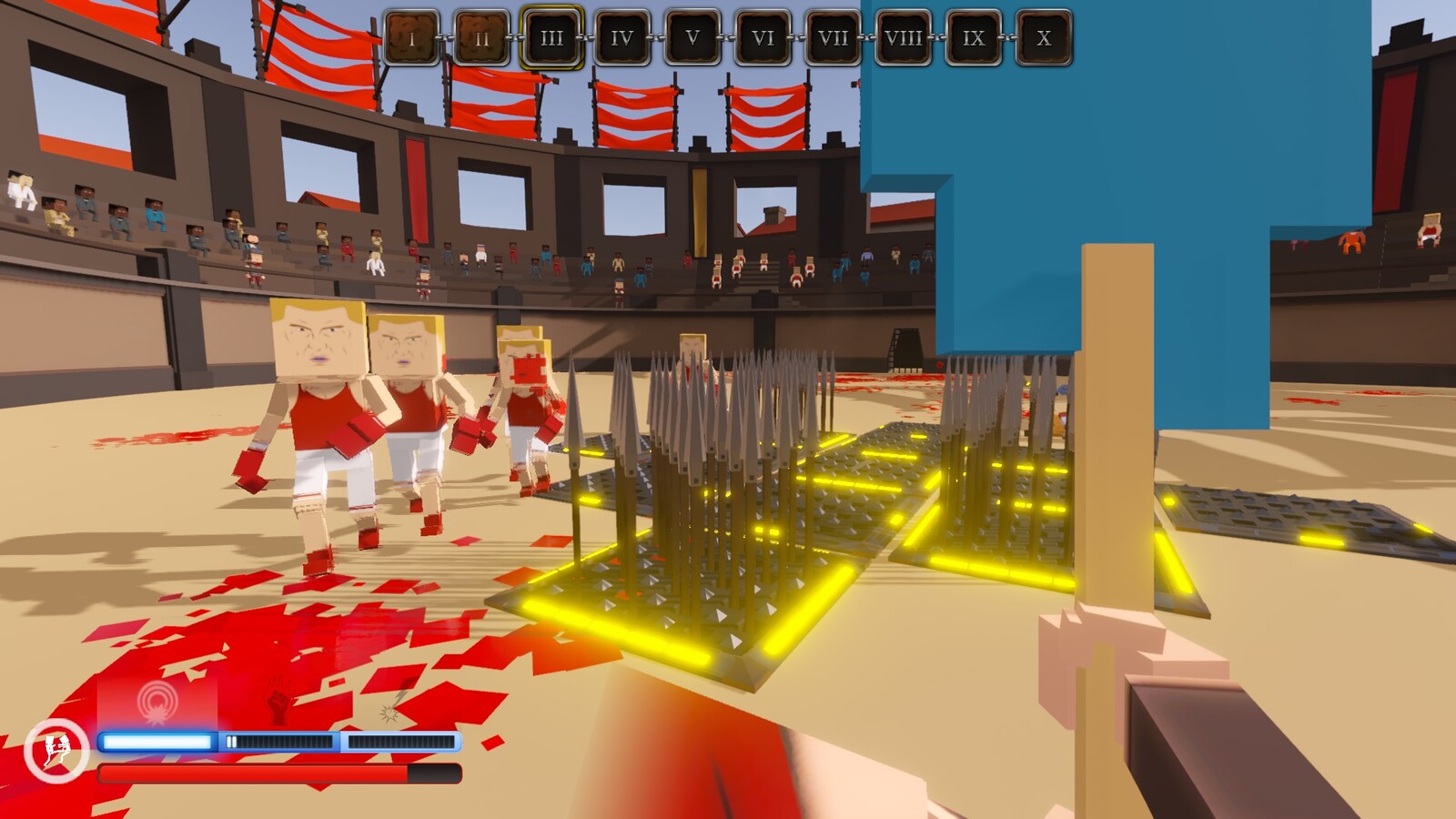 Gotta be a new genre.

But you can rectify whatever problems you might have with Paint the Town Red’s authored content in its custom level editor, provided that you’re playing on PC. You can even import your own music and character textures to spice up the aesthetics. The interface is easy to understand, if unattractive, letting you edit level geometry, enemy and prop placement, plus some simple logic. And with Steam Workshop integration, you’ll never run out of content. It’s everything you really need in a level editor—the foundation for an awesome afternoon is already here, why add anything unnecessarily complicated?

The game’s last mode is definitely its biggest curveball; Beneath is—wait for it—a procedurally generated rogue-lite fit with its own classes, upgrade system, and bosses. The first thing you’ll notice, aside from the obvious shift towards a darker tone, is an absolutely gigantic hub area. Most of it is purely aesthetic, but the level of detail and care sets the precedent for what’s to come. Beneath starts you off with a handful of upgradeable classes with unique stats and special moves, then throws you into zone upon zone of mode-specific enemies, mechanics, and trials.

Every zone is a labyrinthine death trap populated with armed foes and loosely placed weapons that you’ll need to battle your way to the exit portal. Beneath introduces ranged and flying enemies into the mix that demand new tactics to defeat. Despite the entire rogue-lite repertoire being hurled your way, health is still scarce and weapons are still brittle. The mid-goal of each zone should be to find a shop where you can spend gold from kills on healing, stat boosts, and passive buffs. Permanent upgrades can be bought with an uncommon currency also obtainable from kills. Scattered amongst the flying skulls and laser shooting ore spiders are randomized upgrades that you can put your resources towards as well. Resources are lost when you die, so spend them while you can! When you inevitably return to the hub area, you can put crystals obtained from bosses towards additional upgrades and classes. 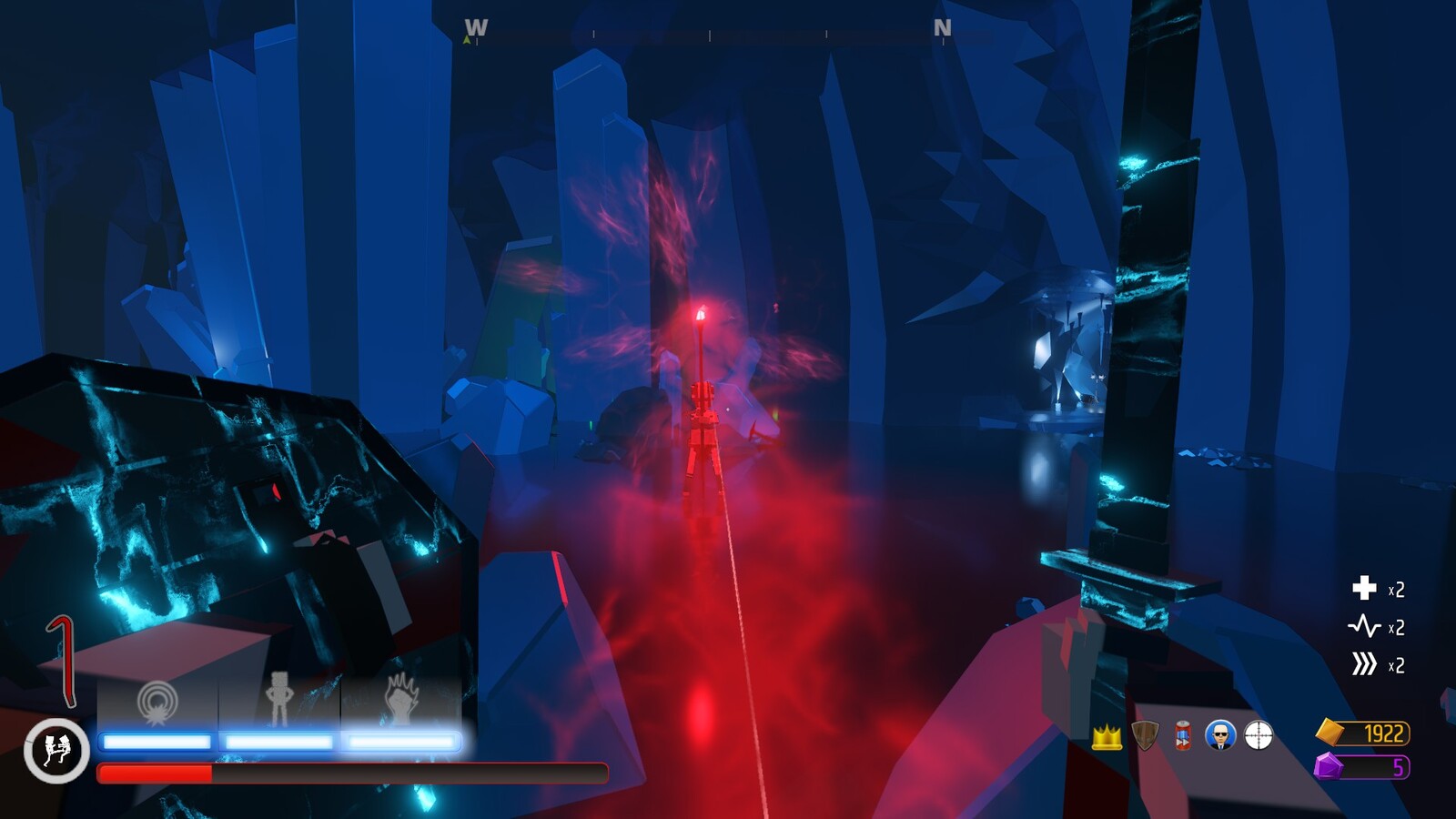 This took a turn.

Unless you wander your way into some pathfinding buffs, you’ll end up like me—sprinting through tunnel after tunnel, lost and confused. I don’t think I’ve ever been more disoriented in a rogue-lite than I have been in Beneath. Layouts are hopelessly difficult to process as everything looks the same! If I was lucky, I’d stumble into a miniboss or two, but the bulk of my ill-fated travels ended in frustration. Between the awkward level design and deviation from the combat I’d fallen in love with, Beneath didn’t give me much to latch on to. The weapon durability and first-person action of Paint the Town Red do lend themselves to the rogue-lite subgenre, but there’s nothing here that’s truly noteworthy. It’s a fun departure from scenarios and arena challenges, I just wish it didn’t leave behind what I found so satisfying about the game to begin with.

That first hour of Paint the Town Red was magical, for a lack of a better word. And so I found my home in Scenario mode, playing around with the modifiers and browsing custom levels in search of that initial high. The game has all these other flavors of gameplay to scratch quite a few itches, but that cathartic mayhem I craved was lost somewhere along the way. One thing is certain: no matter which mode ends up winning your heart, there’s plenty of content to keep you engaged for hours upon hours.

The pinnacle of ceaseless, contextless voxel violence. It’s hard to top the high-octane, improvisation combat of Paint the Town Red, but those highs don’t always survive across its many modes.

A self-deprecating, overly sarcastic pair of glasses that occasionally possesses a human host in order to partake in the delightful process of playing video games, then immediately complaining about them. When he is not playing games (a rare occurrence), he can be found either writing about things that no one cares about, or haunting the quiet streets of his Canadian suburb.
Related Articles: Indies, Paint the Town Red
Share
Tweet
Share
Submit