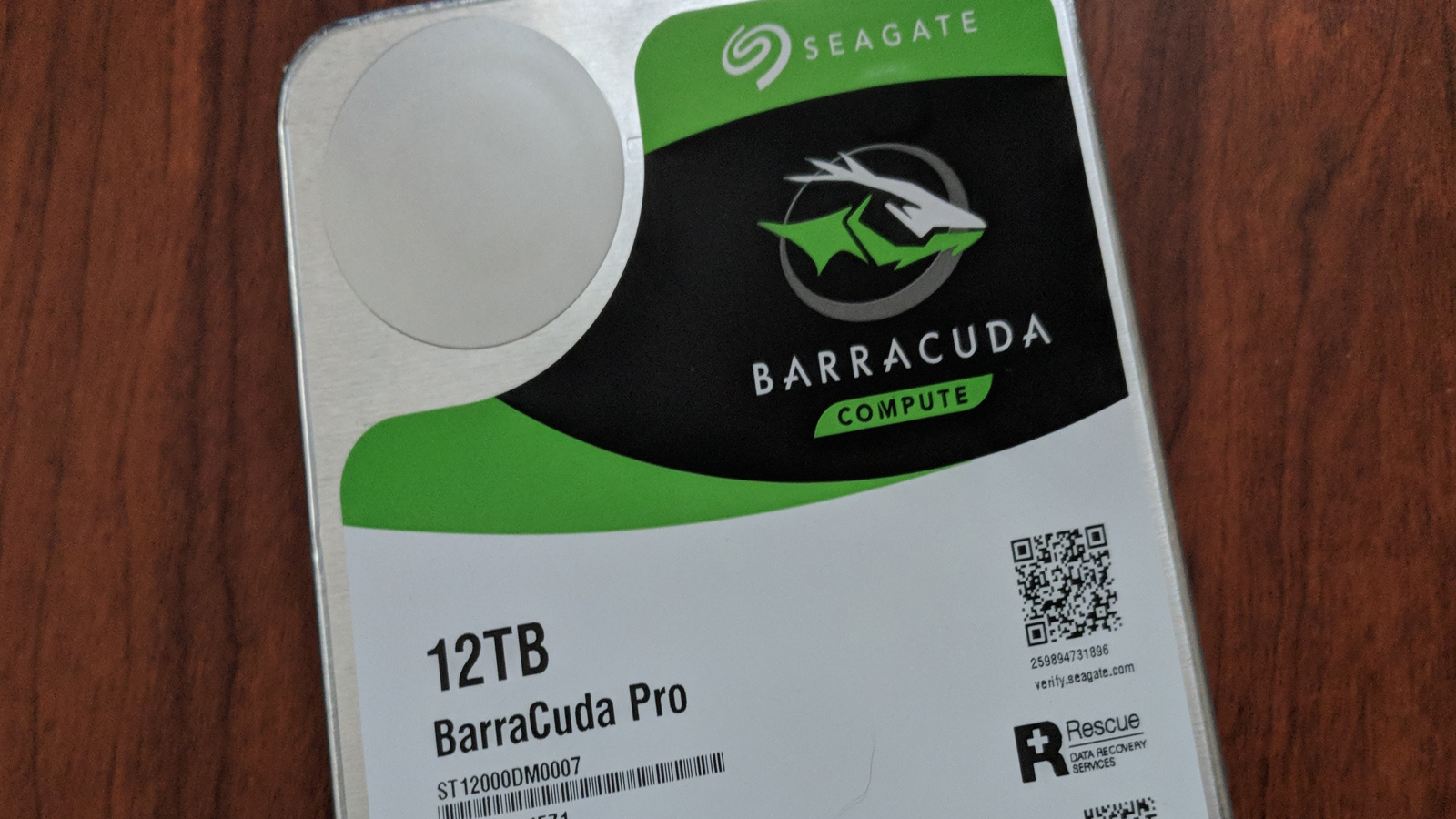 Who in the world needs 12TB of storage space?! Gamers, that’s who. Watch Dogs 2 is over 100GB with the high resolution textures, Final Fantasy 15 is 148GB, Middle-earth: Shadow of War tips the scales at 151GB with its most recent patch. Start throwing in “4K” patches for games like Gears of War 4 (110GB), Halo 5 (113GB), or Quantum Break (180GB) and we’ve vastly exceeded the size of most reasonable M.2 drives, and all but the most stalwart of SSDs, even Seagate’s recently-released BarraCuda line. In short, as much as we enjoy the smaller form factor and higher speeds of all-flash drives, there’s still a place for high-capacity rotational storage.

In my most recent PC build, I’ve tried to go with a pair of m.2 drives for my OS and for my game storage, but with just 1.5 TB of storage, I’ve found myself doing far more downloading, installing, and uninstalling than I’d prefer as I juggle through reviews and previews for Gaming Trend, as well as keeping a handful of mainstays and VR titles installed for normal play. Put simply, I needed a mechanical drive.

If it’s been a while since you’ve looked a hard drives, there is a chance they might be slightly different than you might remember. For instance, they are now filled with helium to ensure a smooth rotation, and utilize far less power than their power hungry predecessors (7.8 watts in use, and 4.8 at idle, in this case). The SATA 6Gbps interface is still the defacto standard, as is the magnetic medium (parallel magnetic recording, or PMR, to be precise), but much of the way drives are constructed have seen a great deal of improvement. The question, then, would be how much of a difference it would make in real-world transfer rates.

First you have to provision and format the drive.

As I evaluated the drives on the market, there were a few boxes I wanted to check off. Obviously price to performance ratio is a factor, but having a solid warranty, a good amount of capacity, power efficiency, and real-world speed instead of synthetic benchmarks were all important to my purchase decision. While many manufacturers are pushing towards cloud storage, Seagate understands that there are still plenty of us who need something that can handle high-speed capture, gaming, and local storage that can keep up with all of those dissimilar workloads. As a result, I picked up the Seagate 12TB BarraCuda Pro 12TB. Having used Enterprise-level BarraCuda drives, I felt I should give the consumer-grade entries a go.

Before we get too deep in the weeds, in case you didn’t know, larger capacities of hard drives are achieved by adding additional platters that can be read and written to. As a result, this eight-plattered beauty is downright heavy. This isn’t a big deal as you are using it to store data, not juggle it like a clown, but let’s take a look under the hood to see what’s driving the extra weight:

Unless you work with hardware a lot, you probably haven’t done the mental math to realize that the “power on hours per year” of 8760 adds up to something that you rarely see in a desktop hard drive — the BarraCuda Pro is built to operate 24/7. Most NAS (Network-Attached Storage) drives are built to operate this way, but it is unusual to see it in a drive meant for desktop use.

Backing up your data is important, and with a drive this large to do it with, making sure your data stays safe is crucial. The BarraCuda Pro comes with two years of Seagate’s Rescue Data Recovery plan service, ensuring that no matter what happens, mechanical or otherwise, the Seagate team will help you recover your data. Beyond data recovery, Seagate is offering a 5 year warranty, whereas most companies offer a year, or two at the most. That’s a level of confidence I can get behind.

To push the speed of the drive, Seagate equipped it with a beefy 256mb of multi-tier cache RAM (MTC). MTC is layered NAND (non-volatile flash, like you’d find in an m.2 drive), DRAM, and software combined to optimize drive read and write performance. With a rotational speed of 7200 rpm, Seagate advertises sustained read speeds of up to 220MB/s. I was eager to see how that’d hold up in the real world, especially when coupled with what can only be described as a staggering amount of storage capacity.

As I only have one of these drives, I’ll be running all tests in single drive configuration mounted internally and attached to an Asus ROG Strix Z370-H Gaming motherboard running an Intel i7-8700k Processor with Corsair Vengeance LPX 16GB (2x8GB) DDR4 DRAM (2666MHz). In our testing, we’ll be doing raw copies of 20GB in size to and from the device, as well as measuring performance using CrystalDiskMark, ATTO, and HD Tach for some synthetic work. There are many more testing utilities that can accomplish this task, but through our own testing we’ve not found an appreciable difference, so these three are as useful as the next — they are just the ones we’ve chosen.

As you can see, the drive can reliably deliver 271 MB/s (that’s megabytes per second, not megabits) despite an advertised speed of 220 MB/s. Similarly, it exceeds the advertised write speed, handing out 265 MB/s in these synthetic benchmarks.

ATTO writes across the drive using various sizes, and as you can see it is as consistent as a hot day in Arizona. Almost regardless of block size, the drive performs around 260 MB/s for read and write. It’s not often you see this level of consistency.

HD Tach does a write across the depth and breadth of the disk, showing performance across all of the platters in the drive. Once again, while there are some thready moments where the drive might drop down to as low as 220 MB/s, most of the time it hovers consistently at or around the 250-260MB/s range, confirming what we’ve seen in the other two tests.

As you can see above, all three tests yielded similarly consistent results, providing better than advertised speeds. To test the real world copy performance, I also moved nearly 200GB of data from an m.2 drive to the BarraCuda drive. I’ve shortened the sequence for video brevity, but the transfer took 18 minutes and 30 seconds to move the entire payload. As this test involved several Steam games, the file sizes varied wildly, allowing for natural swings in the transfer speeds. This is far more real-world reality, but still showcased that, on the whole, the BarraCuda Pro is more than capable of delivering on its speed promises.

While I did this review, the only real con I could come up with is the fact that, while this is an extraordinary amount of storage, the price tag is rather steep for what is ostensibly a technology on its way out. There’s absolutely no arguing that there is a place for large capacity storage, and in a world where games continue to grow in size but SSDs are struggling to keep up, it’s easy to see that we aren’t done with rotational storage quite yet. The question for you as a consumer will be balancing whether you need this much storage, or if a smaller capacity at a lower price point might be a sufficient investment, which is largely dependent on your use case.

With a staggering amount of storage capacity, the BarraCuda Pro exceeds its advertised read and write speeds, while delivering consistent performance and the best warranty in its class. This drive proves there’s still a place for rotational storage in the gaming world.

Ron Burke is the Editor in Chief for Gaming Trend. Currently living in Fort Worth, Texas, Ron is an old-school gamer who enjoys CRPGs, action/adventure, platformers, music games, and has recently gotten into tabletop gaming. Ron is also a fourth degree black belt, with a Master's rank in Matsumura Seito Shōrin-ryū, Moo Duk Kwan Tang Soo Do, Universal Tang Soo Do Alliance, and International Tang Soo Do Federation. He also holds ranks in several other styles in his search to be a well-rounded fighter. Ron has been married to Gaming Trend Editor, Laura Burke, for 21 years. They have three dogs - Pazuzu (Irish Terrier), Atë, and Calliope (both Australian Kelpie/Pit Bull mixes).
Related Articles: Hardware, Seagate BarraCuda Pro 12TB HDD
Share
Tweet
Share
Submit