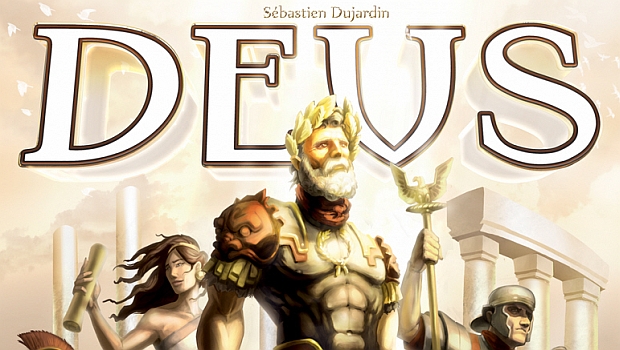 Building a finely-tuned economy is important in almost all Euro-style games. The critical decision players must make is when to stop focusing on their economic engine and start turning resources into victory points. The best games offer a variety of strategies, making that decision less clear, tempting players with the potential for greater reward if additional conditions are met.

Deus, by Sebastien Dujardin and Pearl Games, has the most robust decision tree of any Euro game I’ve played. With limited economic levers available on the board and in each player’s pool of buildings, this is primarily an area control game. New buildings can only be placed adjacent to existing buildings a player controls; having the flexibility to build the optimum building when it shows up in your hand means first controlling regions with less strategic value. Alternatively, players can concentrate buildings on a few choice regions, gaining bonuses from science and eschewing the straightforward economic victory path.

At first glance, the game looks like a more complex version of Settlers of Catan. Tiles are arrayed in patterns based on the number of players. On each tile are painted six regions, depicting swamps, fields, forests, and mountains, which correspond to the four resource types, clay, wheat, wood, and stone. Each tile also has two sea regions and a barbarian village. Deus boasts six types of developments, each with its own diverse set of functions. Following the standard model, resources and gold are used to buy buildings or armies, which in turn yield new resources, gold or victory points.

Deus does an average job leveraging its theme. Ancient Rome is effectively rendered on the five card types. Blue cards indicate maritime structures, used to trade goods for gold or vice versa. Green cards are for resource production. Brown cards represent civic improvements, giving players gold or victory points. Red cards allow players to build military units, the only type of structure that can be moved between regions. Yellow cards correspond to science. Science cards can be difficult to use but are very powerful, allowing players access to additional cards, buildings, and resources. Purple cards are temples, which yield victory points at game’s end.

During a turn, players choose from two basic actions. They may build a structure represented on the cards in their hand, provided they have both the requisite resources and available building pieces. Players start with just two building pieces for each card type. Once a building is paid for and placed on the game board, the card representing that building is placed in front of the player above that card’s color. Subsequent cards of the same color are laid above the previous one, then, and only then, all the cards of that color are activated.

If the cards in a player’s hand do not work well with her current strategy or existing set of buildings, she can instead take the second basic action, and pay tribute to the gods.

Paying tribute is simply an act of discarding any or all of a player’s hand cards to receive the blessing of a god. The tribute/discard action, while not original, is nevertheless well-executed in Deus. Players decide which cards to discard, and then from that set pick one of the card colors, indicating the god paid tribute. Blessings give players new cards and also an effect specific to the chosen god. Neptune (blue) bestows gold in exchange for cards, Ceres (green) bestows resources, and Vesta (brown) bestows victory points. That means it is possible to play a strategy where every turn the action is to pay tribute to Vesta and collect victory points in exchange for hand cards! (You will lose if you actually try this!)

Mars, represented by red cards, bestows a building type of the player’s choice, and Jupiter (purple) allows the player to receive the blessing of any of the other gods. Only one god may be invoked per turn. Paying tribute is an essential part of the early game. It’s an easy way to build a stockpile of gold and resources, or in the case of Minerva, to double the number of cards in one’s hand, increasing strategic possibilities. A smart opening combination is to first pay tribute to Minerva, doubling hand size from five to ten cards, then on the second turn pay tribute to Neptune and cash in those cards for a pile of gold. Since gold can be used as a substitute for resources, that combo gives player economies an early boost.

The final mechanic of the game is the barbarian villages. This dynamic is somewhat disappointing. The villages occupy a region on every tile, but the barbarians don’t actually do anything. The village is essentially a piggy bank for victory points that players can try to crack open using military units. The player with the most military units positioned around a surrounded barbarian village gets the stack of VPs. I wish there was more to it, but adding depth to the military mechanic would be confusing in the context of this game. It is possible to employ a military strategy, but because the number of potential actions are limited by the number of units available, it would be very difficult to make enough consequential military actions to achieve victory.

When the last temple is built or the last barbarian village is defeated, there is one last turn and then the game is over. Desperately trying to maximize win conditions, while hoping other players don’t reach for that last temple piece or move armies to surround the final barbarian village, feels like a race against time.

With more than sixty unique card effects, and so many ways to play (or not play) those cards, Deus sets up as a serious challenge for hardcore Europhiles. This game can possibly stretch for hours if you have four hobbyists intent on trying to win. The thought process when reviewing one’s hand and considering potential future building strategies is not unlike chess. At least with chess all of the pieces are already on the board. Deus challenges players to work with what they get, building multi-dimensional economies to most effectively achieve victory.

Deus is a complex Euro-style game where multiple strategies can result in victory. Highly recommended for hobbyists looking for a challenge.

Mike is a journeyman musician, writer and amateur astronomer who makes a living as a data engineer in Port Angeles, WA. Mike is also a hopelessly obsessed but very marginal player of Magic: the Gathering.
Related Articles: Deus, Tabletop
Share
Tweet
Share
Submit