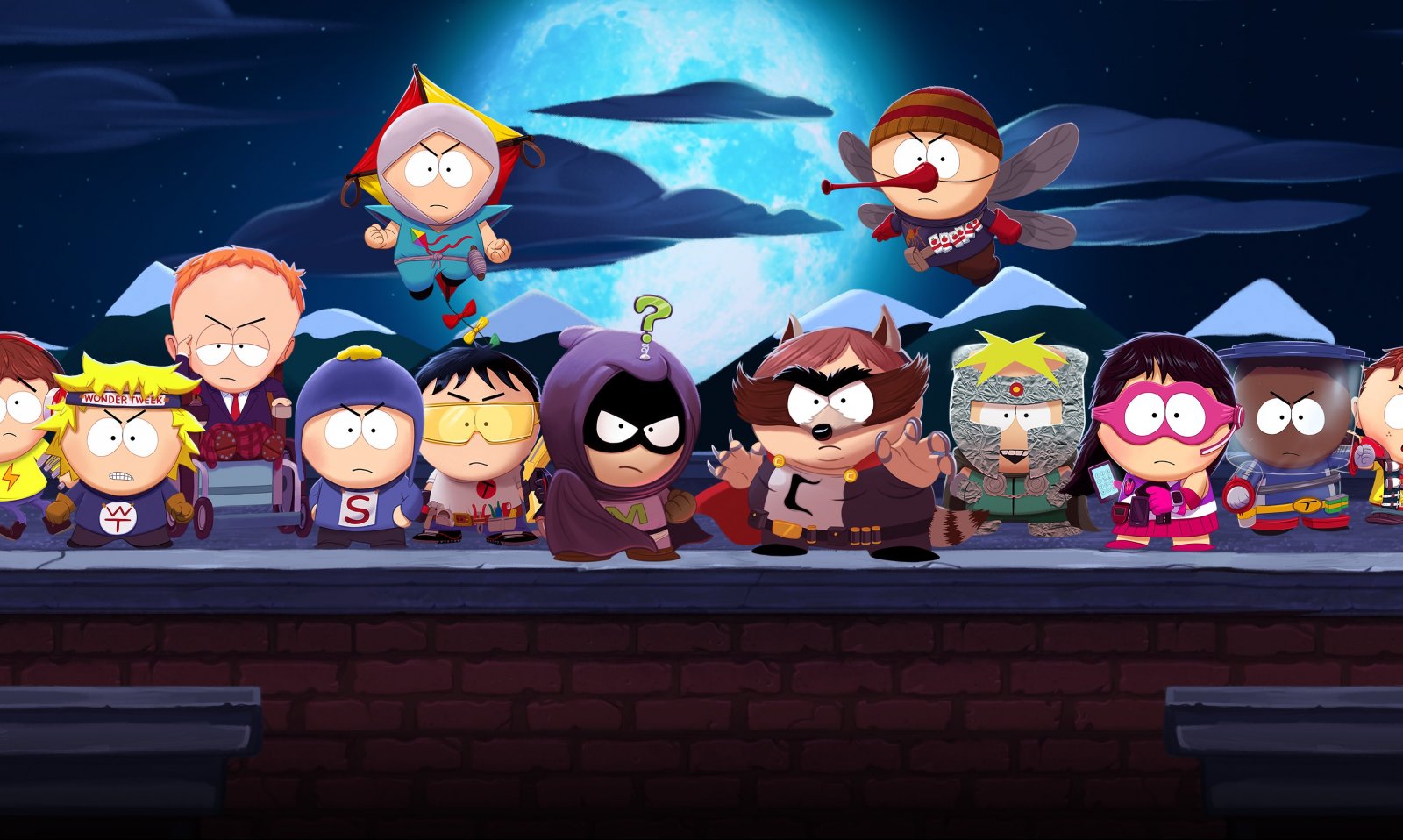 There’s no sugar-coating it, South Park: The Fractured But Whole is simply brilliant. That Trey Parker and Matt Stone were able to take a group of poorly animated, foul-mouthed fourth graders living in a fictitious small town in Colorado and turn it into a successful TV show and video game series full of witty, hilarious commentary on modern society and current events ranging from politics to racism, sexism and pop culture, is nothing short of incredible.

Side note: see this video to learn about the origins of the title, “The Fractured But Whole.” It might change how you pronounce it…

Just like The Stick of Truth, you’re playing as The New Kid (aka, Douchebag, Butthole, or Buttlord) again, but now the boys have switched games from LARPing to superheroes, so that battle-hardened Jew you created in your quest for an all-powerful tree branch is now worthless, just like you. But you can’t just up and join the Coon and Friends superhero franchise, because we all know that every good superhero needs an interesting backstory first.

What you find in there is horrifying, compelling you to devote your potent powers to fighting the forces of evil. What it boils down to, as Cartman so eloquently describes it, is that “You started fighting crime because you saw your dad—the man you trusted—fuck your mom.” Whoa, that’s heavy—definitely (ahem) marvelous material.

Now that you’ve got a solid superhero backstory, what’s next?

Well, Coon and Friends might be great at stopping the evil-doers of South Park, but every franchise needs money, especially to land those lucrative Netflix series. Conveniently, it just so happens that a cat named Scrambles has gone missing in South Park. The offered reward is a whopping $100, which is basically Earth’s total wealth. That $100 would go a long way to funding Coon and Friends’ franchise dreams, so finding Scrambles, especially before the splinter group Freedom Pals do, is paramount.

Financial semantics aside, Coon and Friends’ franchise plan goes something like this:

As you can see, it’s completely foolproof. However, in their search for Scrambles, Coon and Friends uncovers a nefarious scheme that must be dealt with. That, in a nutshell, is the game’s premise. Obviously, you won’t be producing any Netflix shows or profiting at all, but going into further detail would mean serious spoilers.

South Park succeeds in being both hysterical and acceptable because it targets everything. The Fractured But Whole doesn’t shy away from racism, racial stereotypes, gender identity, social justice, anime, video games, superheroes, Catholics, Jews, and all the poop and fart jokes in between. It’ll even offer you a hilariously accurate description of many of these contentious concepts, in case you weren’t already aware. Everyone and everything is in the crosshairs, and those crosshairs are side-splittingly funny.

It’s safe to say that if you’re too sensitive about any one of these topics to have a sense of humor about it, then this is probably not the game for you.  If you’d like a taste, here’s the first 30 minutes of the game in all its glory.

The real genius of this game is how it transforms a completely mundane narrative into something so silly and ridiculous that it can incorporate every aspect of social commentary effortlessly without making it seem out of place. For instance, in contrast to most RPG’s where you determine your class and appearance at the outset, The Fractured But Whole will have you tweaking and adding to your character throughout every stage of the game by completing certain missions. One mission you’ll have is to speak with Mr. Mackey about your gender identity. Were you male or female at birth? What about now, are you transgender or cisgender? Later on in the game, he’ll ask if you’re heterosexual, homosexual, asexual, pansexual, or other.

It doesn’t stop there. In fact, it just gets better and better, but I don’t want to give too much away.

The Fractured But Whole isn’t all fart jokes and sharp satire though. It’s got a solid, but simple, core of familiar RPG gameplay. You can modify your character extensively with a range of different class choices, traits, abilities, and gear, known as artifacts. You can only pick equip four combat abilities at a time, one of which is a very powerful “ultimate,” but you’ll have to access to many more through the classes you select.

You can use a crafting system involving recipes and all manor of otherwise useless, disgusting or just plain weird ingredients to create potions, costumes, and artifacts. Morgan Freeman is quite a chef, apparently.

The combat system has changed from the turn-based JRPG mechanics of its predecessor into more a tactical RPG. Each fight map is on a grid. Movement is limited and most abilities are linear, using only the X or Y axis. A handful allow you to attack diagonally, in an area, or in multiple directions. Since yourself and your allies can only have four active abilities each, swapping certain characters in or out before battle is both fun and key to success. You’re only allowed three allies on the field as well, so it’s important to be aware of your team’s strengths and weaknesses.

Your ass has also grown in potency since The Stick of Truth. You can now manipulate the very fabric time with your farts during battles or to help solve certain puzzles. For you parkour fans out there, Fartkour is now a thing too.

I did find, however, that I wasn’t incredibly motivated to explore the town of South Park itself. At first, I was excited to visit many of the places and people I know and love from the show, but the experience becomes dull and rather formulaic—it’s just not a place of much depth. Some places are inaccessible until you’ve unlocked a certain buddy who can assist you in reaching those spots, but once there, it’s still usually nothing more than opening a chest and leaving. Even the nearly irresistible draw of defiling a newly discovered toilet with the new and improved Dance Dance Revolution cum interactive poop game wasn’t enough to get me through those unopened doors at times.

The game’s side quests, although always fun, didn’t help much either. I’d complete them and move swiftly back to the main quest. Still, I’d recommend hitting all the side quests for the additional XP, unlocks, and laughs.

Rather unexpectedly and despite appearances, The Fractured But Whole actually offers a pretty wide array of tactics, possibilities, and replayability. The game is pretty long as well. Other than some very minor bugs and the poop game controls not being laid out well for PC, it has delivered across the board and well beyond my expectations. I know I’ll be coming back to South Park again and again.

South Park: The Fractured but Whole

In the end, I struggled to find negative things to say about this game. From start to finish, South Park: The Fractured But Whole had me in stitches. It’s the perfect of blend of smart and silly. It is magnificent and absurdly ridiculous in a way that only South Park can pull off. It’s the best possible excuse to laugh about everything and everyone you know you’re not supposed to.