It would be easy to overlook Remnant: From the Ashes before playing it. With characters in junky armor running through bleak environments and fighting nondescript enemies all cast in murky shades of gray and brown, a quick glance at the game doesn’t reveal anything about the interesting things going on below the surface. Even a short session playing through the game’s first area could paint it as an entirely different experience than what it eventually becomes. Put aside those first impressions, though, and Remnant: From the Ashes offers surprising depth in its world, versatility in its playstyle, and satisfaction in its combat.

Remnant is a third-person shooter built around loops of battling through enemies to reach checkpoints (which also respawn said enemies) while exploring the environment to find new loot and eventually defeating the next boss to progress through the level. It’s also incredibly difficult, features upgradeable armor sets, and requires stamina management in combat, all of which has led to a lot of not-particularly-accurate comparisons to Dark Souls. That comparison might get people’s attention, and does describe some superficial similarities, but it doesn’t convey what the experience of playing the game is really like, and it sells some of its most interesting ideas short. It also neglects the fact that Remnant is built around co-op. Playing in single player is entirely possible, but it tends to slow progress to a crawl and turns most boss encounters into brick walls for you to slowly and frustratingly chip through. With a full three-person party, the game turns into a hectic fight for survival with a heavy emphasis on coordinating attacks and conserving ammo, since the difficulty is also ramped up considerably when new players join. 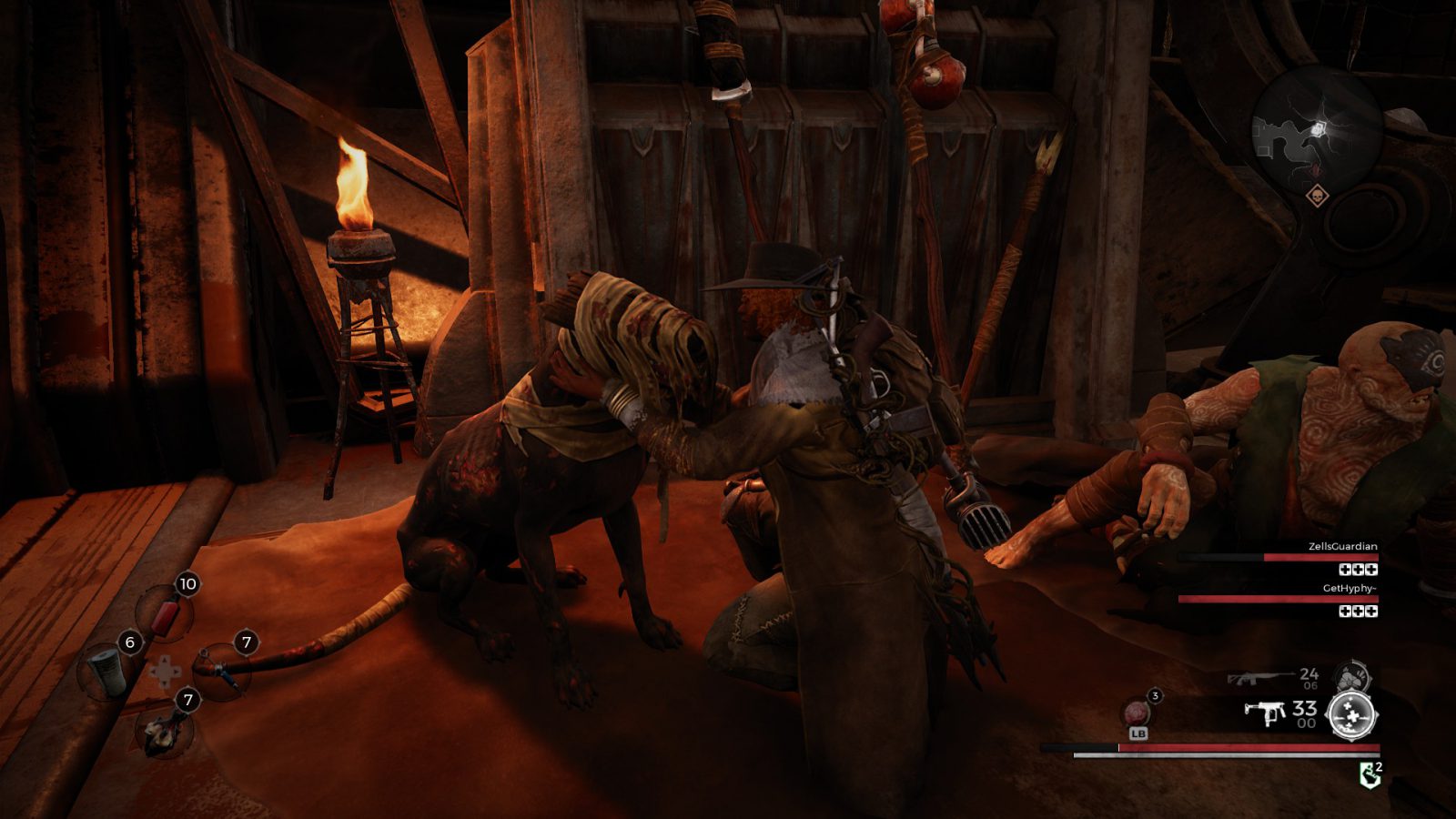 Yes, you can pet the dog.

Multiplayer is absolutely the way to play this game, but it’s not perfect. For a game that’s so much about coordinating your team, there’s no built-in way to communicate (though the developers have said they’re working on implementing chat). Given the rampant hostility and abuse in online games, that may be a blessing in disguise, but it does make it frustrating when you can’t tell your allies that you need ammo or you’re trying to chase down a team member to heal them and they keep running farther into danger. Even a few canned callouts or emotes would have been a step up. When you join a game, you can only spectate the current players until they reach a checkpoint and you can actually jump in, which could mean a long time spent just watching them make their way there. More frequently, players would join a game I was hosting, see that I wasn’t at a checkpoint, and immediately leave, even if I was already running toward one.

In a multiplayer game, only the host actually makes campaign progress, though the other players keep whatever spoils they find along the way. There’s good reason for that, though, and good reason to join another player’s game despite it not moving you further through yours. In Remnant, the game world is randomly generated each time you start a new campaign. The levels still play in the same order and bosses show up roughly at the same point, but the level layout itself, the items you find, the enemies you fight, and even which bosses you encounter could be different each time. That means that jumping into a random game for a while could reward you with gear that you haven’t gotten — and in fact couldn’t ever get — in your own game. It’s a great way to both keep things fresh through multiple playthroughs and encourage players to help each other out in multiplayer. In my experience, it’s accomplished both of these things. I’ve never had to wait more than a few minutes for matchmaking to do its thing, and I’m constantly seeing players with unfamiliar gear that I want to find for myself. 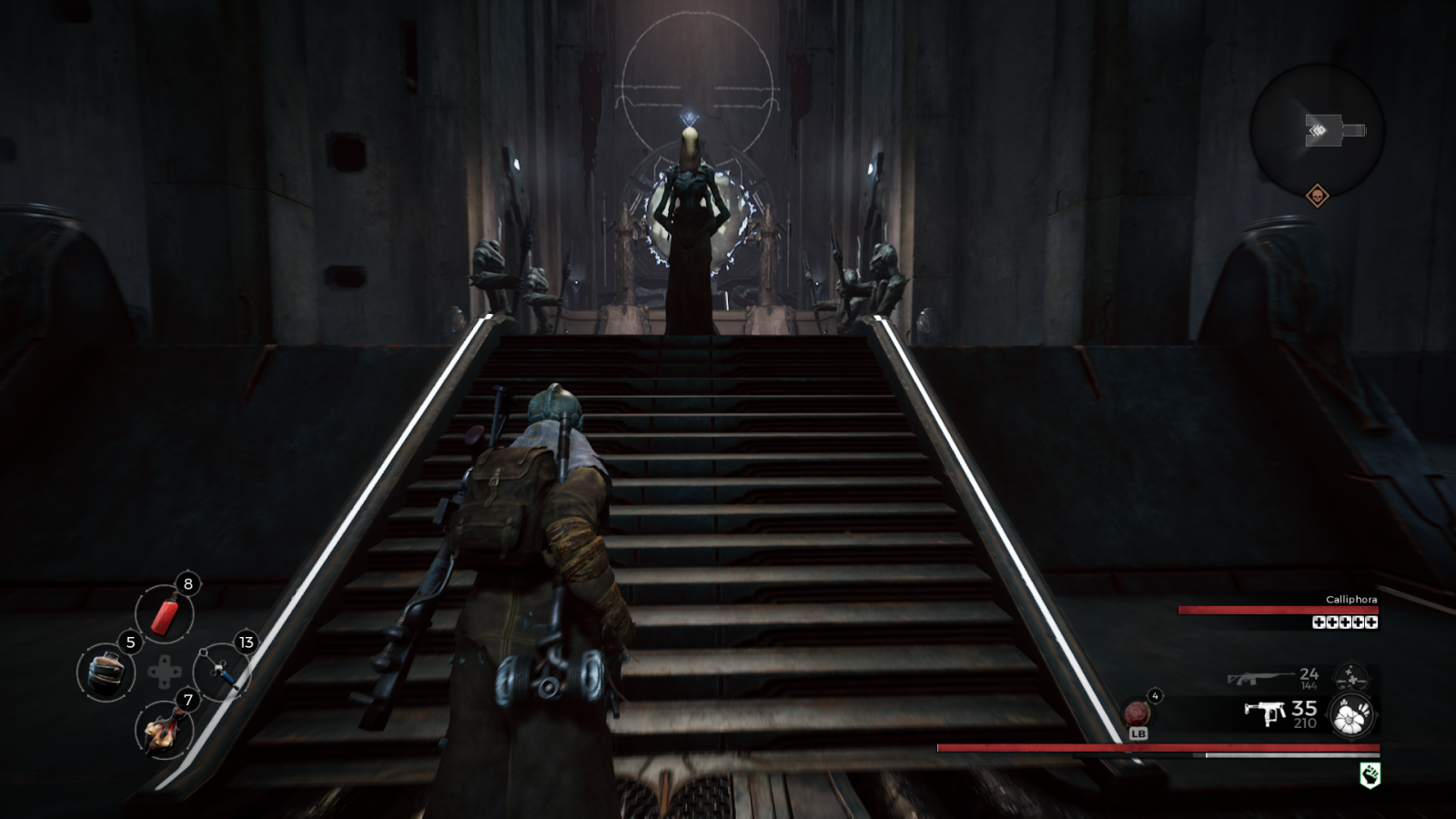 That loot often comes as a reward for solving puzzles, defeating bosses, or simply exploring the world and smashing everything that looks smashable until a new gun pops out. Regular enemies don’t drop equipment, only a currency called scrap and upgrade materials, so when you do come across a new piece of kit, it feels like a big deal. Rather than just chucking weapons and armor at you to keep you distracted, Remnant offers a handful of genuinely interesting, distinct items. Each armor set offers its own unique bonus, like higher damage output after taking a hit or stacking critical hit chance increases, but it’s the weapons that really shine.

You’ll start out with a pistol, a more powerful long gun like a shotgun or hunting rifle, and some manner of crude melee weapon. Before long, those options will expand to include shooter stalwarts like an assault rifle and an SMG, and more imaginative armaments like a beam rifle and a gun that looks at least partially made of gnarled wood that shoots fire-infused bullets. Almost without exception, the guns simply feel great to use whether you’re mowing down a line of murderous tree people or firing desperately at an immortal god-king. Whether you’re using a rifle held together with screws and duct tape or an ancient alien weapon of unknown origin, the guns pack a ton of personality into their design, and somehow even into how they feel to fire. 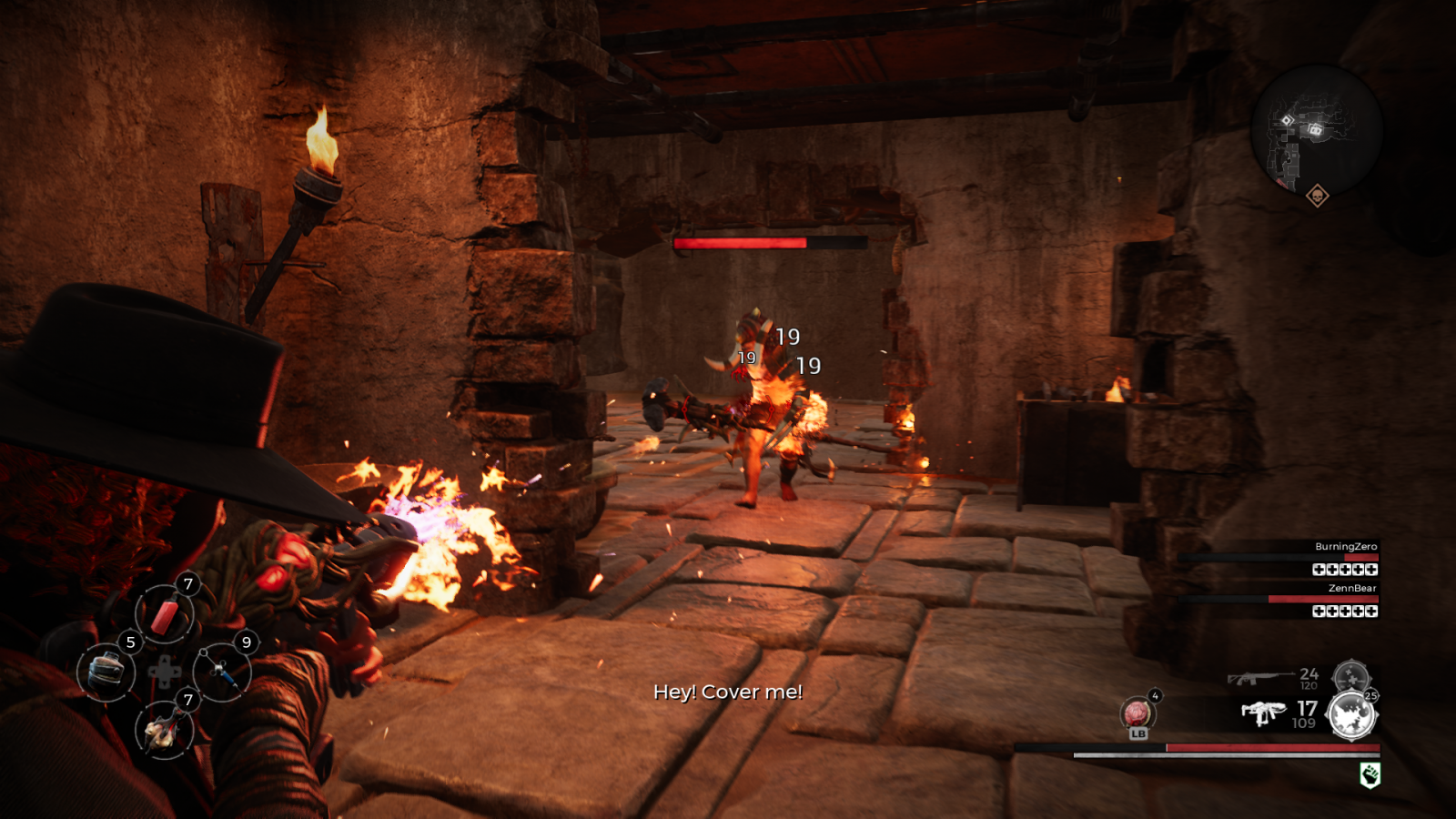 Each weapon can also be equipped with mods, which enable different active abilities. Some weapons can only be made after defeating certain bosses, and these are equipped with a unique mod that can’t be removed. Any other gun can be fitted with a variety of mods that might do anything from casting an area-of-effect heal or blocking incoming damage to outlining enemies through walls or summoning a floating skull as an ally. These are charged by firing the weapon they’re attached to, and you can only have two equipped at a time.

The system feels pretty limiting, especially at first, when you’re not constantly knee-deep in enemies to use to charge your abilities, but it does help characters feel genuinely different from each other. I ran the support class, which starts with a healing mod and an ability that charges mods faster, and I almost always kept that heal and an ability that could distract enemies equipped. I ran across other players whose builds focused on damaging and debuffing enemies at close range and even some who took multiple summoning mods to surround themselves with supernatural bodyguards. 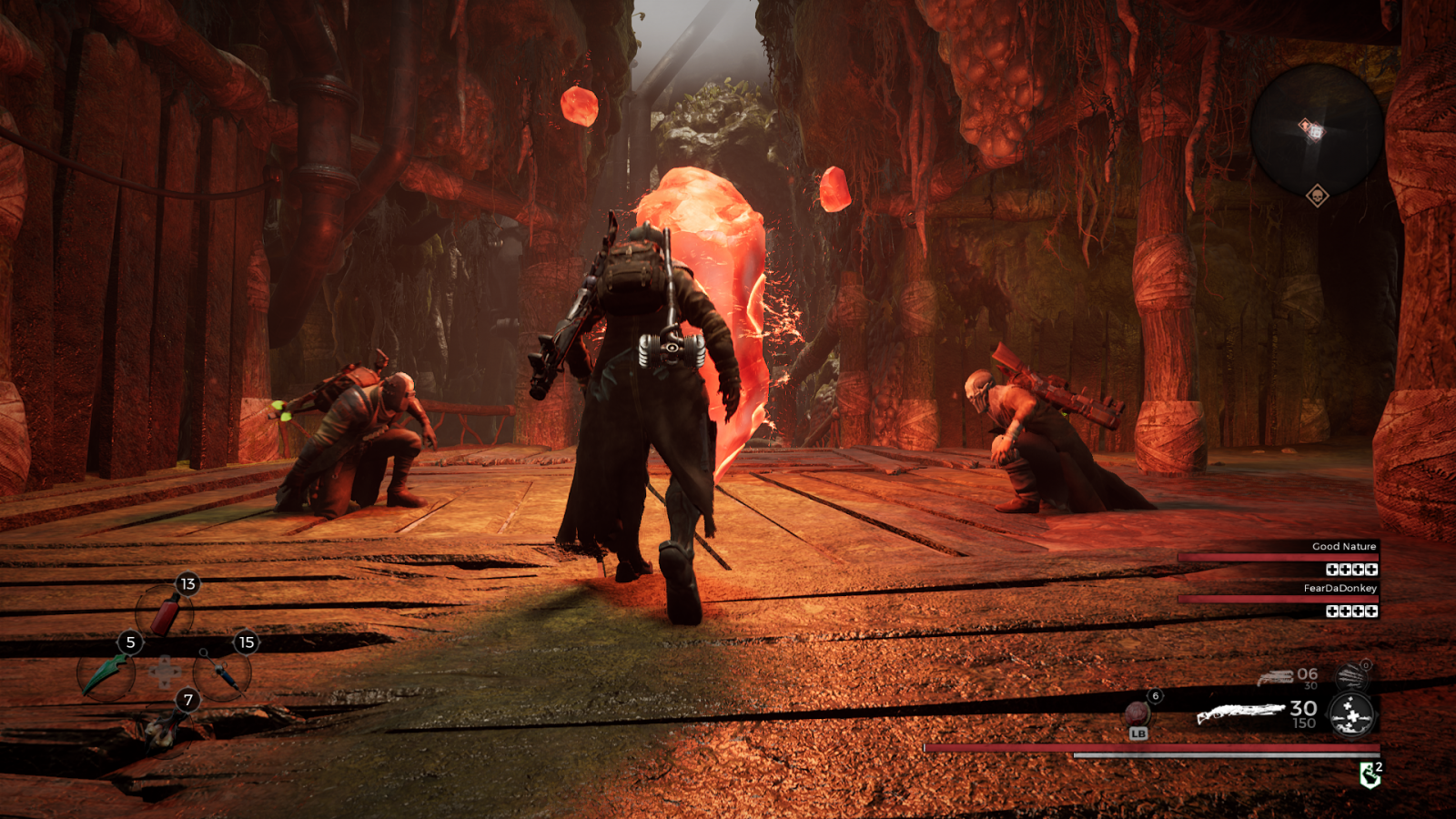 Some of the most powerful mods and weapons come only from bosses, and you have to put in the work to earn them. While there are a few pushovers in the mix (Remnant’s versions of Dark Souls’ Pinwheel), most bosses result in tense, protracted battles that could turn against you even in the final moments before victory. Too often, these fights relied on simply overwhelming you with waves of respawning enemies, which is a shame, because the bosses themselves have some great mechanics and I would have loved to see those fleshed out more without the distraction of hordes of cannon fodder. Still, bosses are almost always a thrill visually, and they put your skill and your team’s coordination to the test. Feeling the rush of finally burying an especially difficult boss after hours of failed attempts is one area where Dark Souls comparisons feel completely appropriate.

In some respects, so is the way that Remnant tells its story. After the first hour, you could almost completely disengage from the story and still enjoy the game. Toward the end of the game, you get another exposition dump that reveals exactly what is going on in the story, and it’s unfortunately kind of a letdown. Along the way, though, there are ample chances to do some digging for yourself and learn more about the world. Remnant actually takes place on a handful of different worlds, each with its own struggle that ties back to the game’s central antagonist, an invasive interdimensional force called the Root. You’ll journey through a ruined cityscape, a blasted radioactive desert, a smothering swamp, and a lush jungle — environments already done to death in video games — but it manages to put a unique spin on each one, making them feel like real worlds with histories of their own rather than just backdrops. 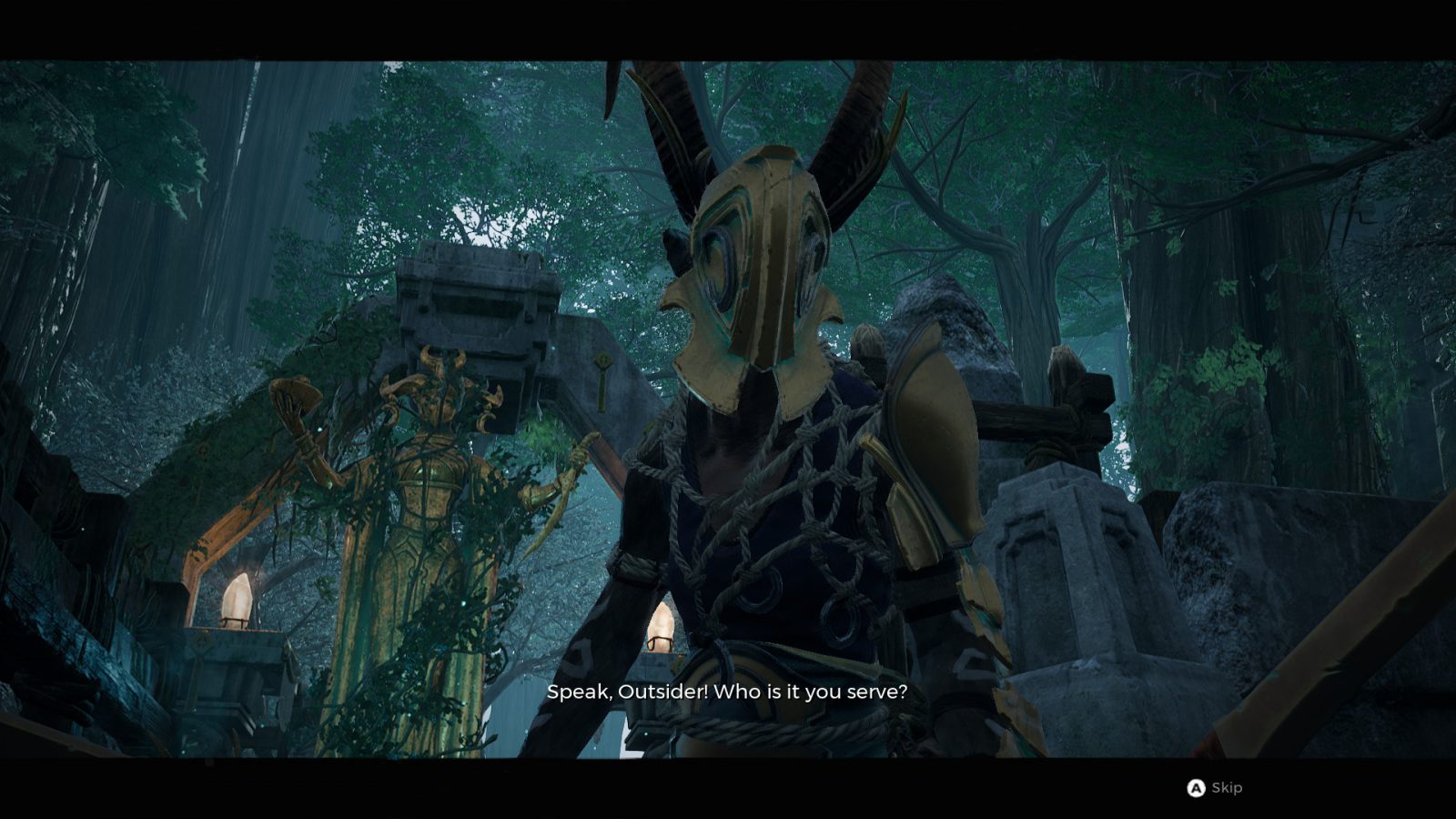 Bits of narrative are often scattered through journals haphazardly placed throughout the environment, which dulls their effect somewhat, but the revelations they contain are still interesting. Item descriptions also hide scraps of lore that flesh out the world more than they directly advance the story, which leaves the game world’s history and cosmology feeling much more fully considered than I would have expected. While the answers to the big-picture questions may be unsatisfying, the game is filled with smaller stories of love and sacrifice, of trust and rebellion, and of how different groups of people react when the end of the world is staring them in the face.

For the first few hours, I wasn’t sure that I didn’t hate Remnant: From the Ashes. It felt clunky, drab, and unfairly difficult, but there was a pervasive feeling that there was something vastly more interesting lurking beneath the surface, and that turned out to absolutely be the case. There are still some nagging issues, like the painfully slow speed of using healing items compared to the pace of combat, but they fade far into the background of everything that Remnant does right. I hope that more people look past Remnant’s uninspiring first impressions, and I suspect that plenty will based on word of mouth. As it stands now, it seems guaranteed to gain at least a dedicated cult following, but a bigger audience and a solid DLC or two could make it a phenomenon.

Remnant: From the Ashes

Remnant: From the Ashes is a tough, co-op centric third-person shooter hiding a surprising amount of depth in both its combat and narrative. Its weapons and abilities are diverse and fun to use, allowing for a variety of unique builds. While its difficulty can feel uneven, victory over a tough boss is always satisfying. Fiercely challenging even in a group, Remnant’s clever use of procedural generation makes subsequent playthroughs as satisfying as the first one.

A committed indoor kid, Bryan moved from Pittsburgh to Los Angeles for a prettier landscape to ignore. They can be lured outside with promises of taco trucks and film festivals, and enjoy trawling through used book stores for works on the occult. Bryan has been gaming since the SNES era and is a sucker for good pixel art.
Related Articles: Remnant: From the Ashes
Share
Tweet
Share
Submit