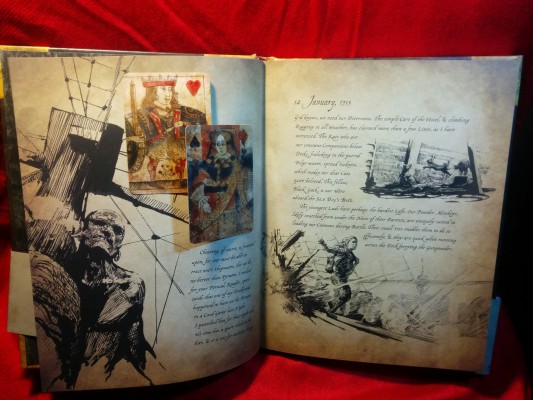 We are rapidly approaching the launch of the next chapter in the Assassin’s Creed series; furling our sails to make landfall in Revolutionary France. But Ubisoft isn’t quite done with their time on the high seas, dropping in Assassin’s Creed Rogue this year for good measure.  While the rest of the team has moved in a new direction, there is also a wealth of untapped history and lore to tell for Assassin’s Creed IV: Black Flag’s most notorious and charismatic villain/hero; Edward Teach, Edward Thatch, or as you more likely know him – Blackbeard.

To further tie together the story of Assassin’s Creed IV: Black Flag and Teach, the team at Insight Editions has created Blackbeard: The Lost Journal.  A mesh of history and fabrication, the hardcover book captures the abrasive and somehow charismatic attitude of the infamous pirate courtesy of author Christie Golden and artists Vance Kovacs and Ben Andrews.  Like the man himself, the book is full of history, tall tale, and full-to-bursting with charm.

At 150 pages, the book feels authentic.  I’m not sure what paper they used, but it has a particular smell and texture to it that makes it feel like something you just dug out of a buried treasure chest.  Similarly, throughout the book are several pieces you’d expect to see tucked away in any respectable Captain’s log.  Fake playing cards the Captain confiscated from a crew member, several period-styled maps, a pair of torn out pages where Thatch removed sheafs that “were not yet ready to share with the Ages”, a wanted poster, and even a Letter of Marque from Queen Anne of England.

I really enjoyed the authenticity that Golden put into her work.  Within are early flag concepts, as well as the real brand of Blackbeard, a complete breakdown of the various pieces of rigging, sail, and mast, and an amalgam of real entries and fictional. Set up in typical journal fashion, each are dated and contain the thoughts of Blackbeard or his crew, creating a narrative point in time.  It’s not quite a novel, but it does tell a story. Some entries come directly from the story of Assassin’s Creed IV: Black Flag, and others are built in the style you’d expect from Thatch.  They stream together perfectly, providing a seamless package that flows together like water.

The highlight, as is often the case, is the artwork.  Every square inch of this book is either covered with in-world text, or incredible scratch-style artwork.  Some of these came from the art team at Ubisoft, but the vast majority of these seem to be originals.  The scratch-style’s heavy line weight creates a beautiful juxtaposition with the super-realistic water colors and art reference.  On page 98 of the book is a two-page art piece that practically sells the entire concept of Black Flag.

Even amongst the hyper-glossy higher-production valued art books, there is a great deal of filler or dead space. Not so in this piece. Part art book and part fictional journal, Blackbeard: the Lost Journal should be welcome in any collector’s pile of treasure.