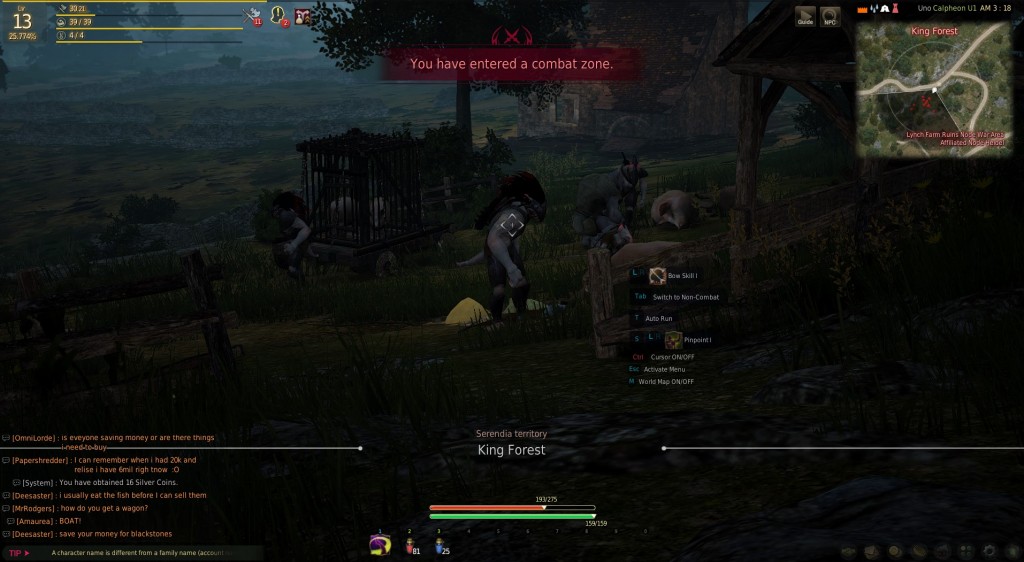 Black Desert Online is the most surprising game I’ve played in a while. From a distance, the game seems as if it will be very ‘samey’ – only the latest, if prettiest, iteration of the same old grind-and-gear gameplay any seasoned MMO player has experienced by now. But get up close and Black Desert Online (hereafter BDO) tears that mask off and reveals its true face: this here’s a sandbox game, ladies and gentlemen! A sandbox game filled with industry and crafting, trade routes and customization. Novelty and new ideas! All in a Guild Wars 2 styled package that swaps a monthly fee for a one-time box purchase, plus a cash shop. If you’re looking for a new MMO to conquer but want something with an abundance of beauty and depth, BDO is a game to check out.

While freshly released in the North American market, BDO had its original launch in South Korea way back in 2014. This is great, because frankly, new MMOs are like babies – full of potential, often a bit cute, but for anyone but their creators they’re generally going to be little more than a burdensome pain in the ass until they’ve matured enough to do something interesting. Thankfully, MMOs mature faster than humans – so BDO comes to the US with the benefit of over a year of bug-fixing, polishing, feature additions and tweaks. In a world where Steam Early Access titles are becoming the new normal, playing a game that’s had that much post-release love is a nice change of pace.

First clue that it’s a combat zone: the large, dangerous demon-creatures skulking around.

Most people who have heard of BDO likely came across it when developer Pearl Abyss opened it up for public preview. As anyone who played around with it can attest, the customization here is impressive beyond the norm: from limb length to hair style to facial features, just about everything about your avatar can be customized in beautiful (or gruesome) detail. On the downside, there’s a certain amount of limitation cooked into the customization insofar as classes are gender-locked – no male valkyries here, and no female warriors. That’s somewhat mitigated by the decent customizability of the classes themselves, but it will be an issue for those used to greater choices.

The storyline of BDO struck me as forgettable, by which I mean I’ve mostly forgotten it despite working my way through multiple starting quests. It involves great nations mixed up in war, alliances and betrayal, strange powers coming from black stones, and a curious little quasi-sidekick whose appearance starts out as ‘cutely evil’. It also involves a lot of cut-scenes and sub-par voice acting, both of which combined to ensure I quickly clicked through a good share of text that had nothing to do with quests and rewards. Call me impatient, but I doubt I’m the only one out there – and rare is the MMO where the story is a main draw that keeps players coming back anyway.

While the story didn’t grab me, the world definitely did. MMO and RPGs have always had the problem of illustrating a world that seemed remarkably empty. You know the drill: a fantasy world of magic and swordsmanship, capital cities comprised of a couple dozen people at most, the near-complete absence of other human beings on the roads, and so on. BDO, in contrast, presents a world which feels alive and huge at the same time – no mean feat. Masses of travelers walk along the routes between cities (admittedly, in suspiciously organized and narrow lines.) Cities themselves are filled to the brim with citizens, most of whom aren’t particularly interesting, but who nevertheless make the area feel like an actual hub of civilization. The rest of the world follows a similar pattern, where dealing with (say) an encampment of imps means walking into an area where the creatures are absolutely massed around, milling about in great numbers. It’s the sort of thing that one eventually grows accustomed to, but initially it has a positive impact on the immersive feel of the game. The main downside here is that all of these characters still take resources to draw – and the engine (particularly with less powerful PCs, I imagine) may take a little time to properly represent them on the screen. Having some pop-in in exchange for this much ‘life’ in the world feels like a good tradeoff.

Even the map in BDO feels deep – complete with a day-night cycle illustrated, fog of war, and area highlights.

Combat in BDO is well-executed, playing up on the recent MMO trends that skew gameplay in the direction of action, mobility and positioning, rather than relying exclusively on raw statistics and skill rotation. Combo moves are a major focus, requiring the player to use certain sequences of skills in order to achieve maximum combat effectiveness, while also requiring a lot of moving around to avoid enemy attacks or land some of their own. Paired with this is the skill point system which provides some substantial freedom in choosing how to build up one’s character. Each class has an abundance of skills to pick from, each costing a certain number of skill points to buy, with some skills requiring the purchase of others in order to unlock them. It’s a deep system, marred largely by the seeming ease of most fights. Granted, I’m not at max level yet, but even the boss fights I’ve engaged in (solo) haven’t really pushed me. I’d like to attribute that to my superior skill, but I suspect PVE in the game is just on the easy side. While not directly related to combat, the world’s interactivity – in the form of being able to climb and swim and generally explore the world – is also substantial. I’ve heard it described as ‘parkour’ before, but so far I haven’t encountered any frantic racing which would do that description justice. All the same, the freedom of movement is refreshing.

But all of this leaves out the most compelling aspect of BDO: the depth of the sandbox aspect. As I wrote at the start, this caught me off guard, since I walked into the game expecting it to be a very pretty but ultimately ‘samey’ MMO experience. In reality, there’s a lot going on here – and one almost gets the impression that the devs are going for a kind of ‘EVE-Online but in a fantasy setting’ experience. “Like Archeage, but with even more to it” also comes to mind. BDO allows players to purchase and furnish houses, hire workers to gather resources, engage in resource trade, and more. The world is overflowing with resources to gather and crafting recipes to try out, up to and including fishing (which can be done while idling, or via an active minigame which increases fish quality.) There’s so much to do that it actually feels a bit overwhelming, especially if you veer off the otherwise this-sure-seems-like-one-big-tutorial main quest in favor of exploring the world by yourself. For a game which doesn’t charge a monthly fee, this is a delight – and I can practically guarantee that any player who craves sandbox exploration or who finds themselves lost in crafting and trade will get their money’s worth out of BDO and then some.

If you’ve got a truly tricked out system, Black Desert Online offers some gorgeous graphics. Notice the ‘if’.

In fact, the enticing nature of that sandbox leads me to my one major complaint about the game – the utter requirement to follow along with the main quest. Again, this questline seemed to largely function as a tutorial, but it’s not the sort you can elect to easily skip past – completing the quests unlocks more and more space in your character’s inventory. As any MMO player knows, inventory space is pivotal: there’s a certain kind of misery in killing a monster and getting a good drop, only to realize you’ll need to destroy something in your backpack to make space for it. As a result, the questline goes from merely being uninteresting (yet optional) to being a literal chore to get through. Unfortunate, but necessary.
But if the biggest complaint about an MMO is ‘You have to actually finish the quests’, it may as well be praise. BDO offers a great sandbox MMO experience, complete with deep character customization, a variety of classes to play, and a crafting/trade experience that goes far beyond the normal offerings. If you’re looking for a massively multiplayer game which offers a world which feels alive, looks beautiful and demands a bit of reflex-oriented skill to succeed in, Black Desert Online is a top notch choice.

A gorgeous world that feels truly alive, Black Desert Online is a solid entry into the sandbox subgenre of MMOs. Benefiting from having been launched in a major market for a year before coming to the West, it offers an open world to explore, and an especially deep tradeskill and trading system mixed with an action-oriented combat scheme.

Victor Grunn has been a gamer since the days of single-button joysticks and the Atari 800XL. When not lamenting the loss of the Ultima series or setting people on fire in Team Fortress 2, he's an aspiring indie game developer and freelance writer.
Related Articles: Black Desert Online
Share
Tweet
Share
Submit