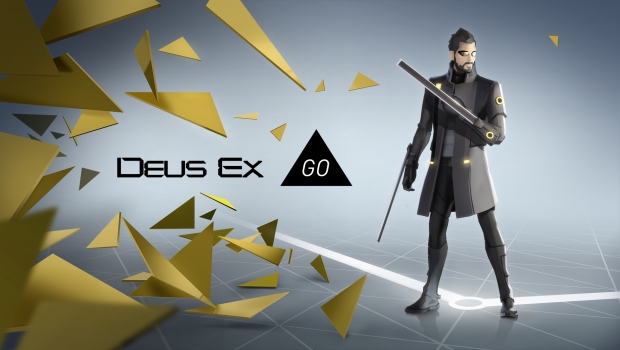 Square Enix has latched onto something pretty fantastic with their GO series. Hitman GO was a real hit, and Lara Croft GO was far more than a simple reskin. Now the team is back to tackle another beloved franchise with Deus Ex GO. Staying close to their roots, the game sports the same simplified graphical presentation, but with a whole bevy of new ways to tackle puzzles and challenges.

Built on the Unity Engine, as are previous GO titles, the game is gorgeous and uses the same sepia-toned presentation as the title screen of Mankind Divided. The backgrounds feature the same stylized broken polygons as you’d see at the menu screen, but the important pieces (characters, props, etc.) are highly detailed.

It looks simple. It’s not.

One gameplay element that is significantly different than either of the previous GO titles is that enemies now possess many of the powers that Jensen held for himself in Human Revolution. This manifests immediately as soldiers activate Titan Shields as soon as they see you, charging down longer corridor lines. That same shield prevents you from taking them out until they are turned off, even if you catch them from behind, so an adjustment to tactics are in order.

As Deus Ex is inherently a stealth game, there are new opportunities here. Series protagonist Adam Jensen can pick up a small triangle object that allows him to enter stealth and bypass areas or sneak up on his enemies unseen. Like the other games, it doesn’t last long, though. Giving you just two stealthy steps, planning routes becomes more critical than ever. This object also powers Adam’s ability to remote-hack a computer, manipulating it from a distance. Many later puzzles require crackerjack timing and careful pre-planning as you may not be able to disable a sentry, instead timing your roll past a turret by ensuring your foe is in the way of incoming fire.

Graphically, the game is absolutely gorgeous. Hitman GO used a very static boardgame style, while Lara Croft GO focused more on the massive backdrops and hidden gems. Deus Ex GO sticks to the obtuse angles and sterile secret lab conditions that mesh with the storyline. Cutscenes are told with stylized minimal comic book style panels, though sadly without the excellent voice work of the main game.

The takedowns by Adam (and unfortunately for him, the painful takedowns performed against him) are far more brutal than Lara Croft GO or the boardgame maquette-esque Hitman GO. Basic Ironflank soldiers will shock him with a long stick, and then throw salt in the wound by smashing Adam in the back of the skull or kneeing him in the face to finish him off. Turrets, on the other hand, have no mercy for Adam, cutting him to ribbons instantly. Adam rolls into place using his arm-blades, punches, kicks, and Icarus Dash to dispatch those who stand in his way. Hidden blades, stealth takedowns, and rolling attacks add a lot more flourish than we’ve seen in previous GO titles, and it’s a welcome sight.

Adam is anything but defenseless.

Beyond the extensive story, Deus Ex GO features a daily challenge system that extends to Deus Ex Mankind Divided. Finishing the story nets you two Praxis Kits you can use for upgrades in the console/pc game. Finishing a week’s worth of daily challenges snaps up another Praxis. It’s a nice way to tie the two games together that also helps extend the story of both.

Puzzles in Deus Ex GO aren’t as much about about finding the singular path as they are about creating distractions, blocking sightlines, and using the environment. Hacking comes into play when you encounter turrets, shields, and robotic soldiers. When you step onto a terminal location you’ll draw lines to the object you want to disrupt, thus bringing it under your control. The enemy isn’t stupid, however — if they reach a terminal you’ve hacked, they can reclaim it, or terminate the line you’ve drawn as they cross it. This is demonstrated nicely when you are standing on a floor tile that suddenly stuns you to death. Later levels have you trying to figure out when to use the single-use powers as they can be used for remote hacking, or for stealth. It creates a risk/reward dilemma that builds more than a few ‘ah-ha’ moments. It gets more fun when Adam gets weapon augments. Much like Hitman GO, these simple mechanics make the game very easy to pick up, but very difficult to master.

I just wish the game had voice acting.

Unlike Lara Croft GO, there are no more pixel hunting artifact hunts. Instead, you’ll “master” a level by simply completing it within a certain number of moves, much like the optional objectives in Hitman GO.

I do have to compliment the team at Square Enix Montreal for a fantastic soundtrack. It’s haunting, it fits the action moments as well as the quiet moments, and it stays nestled in the background perfectly.

Very approachable and just the right level of challenging, Deus Ex GO extends the main product perfectly. It captures the look and feel of Mankind Divided, while boiling down the stealth and combat gameplay into approachable turn-based action. The only thing missing here is the soft gravelly tones of Alex Toufexis as Adam Jensen.

Ron Burke is the Editor in Chief for Gaming Trend. Currently living in Fort Worth, Texas, Ron is an old-school gamer who enjoys CRPGs, action/adventure, platformers, music games, and has recently gotten into tabletop gaming. Ron is also a fourth degree black belt, with a Master's rank in Matsumura Seito Shōrin-ryū, Moo Duk Kwan Tang Soo Do, Universal Tang Soo Do Alliance, and International Tang Soo Do Federation. He also holds ranks in several other styles in his search to be a well-rounded fighter. Ron has been married to Gaming Trend Editor, Laura Burke, for 21 years. They have three dogs - Pazuzu (Irish Terrier), Atë, and Calliope (both Australian Kelpie/Pit Bull mixes).
Related Articles: Deus Ex Go
Share
Tweet
Share
Submit