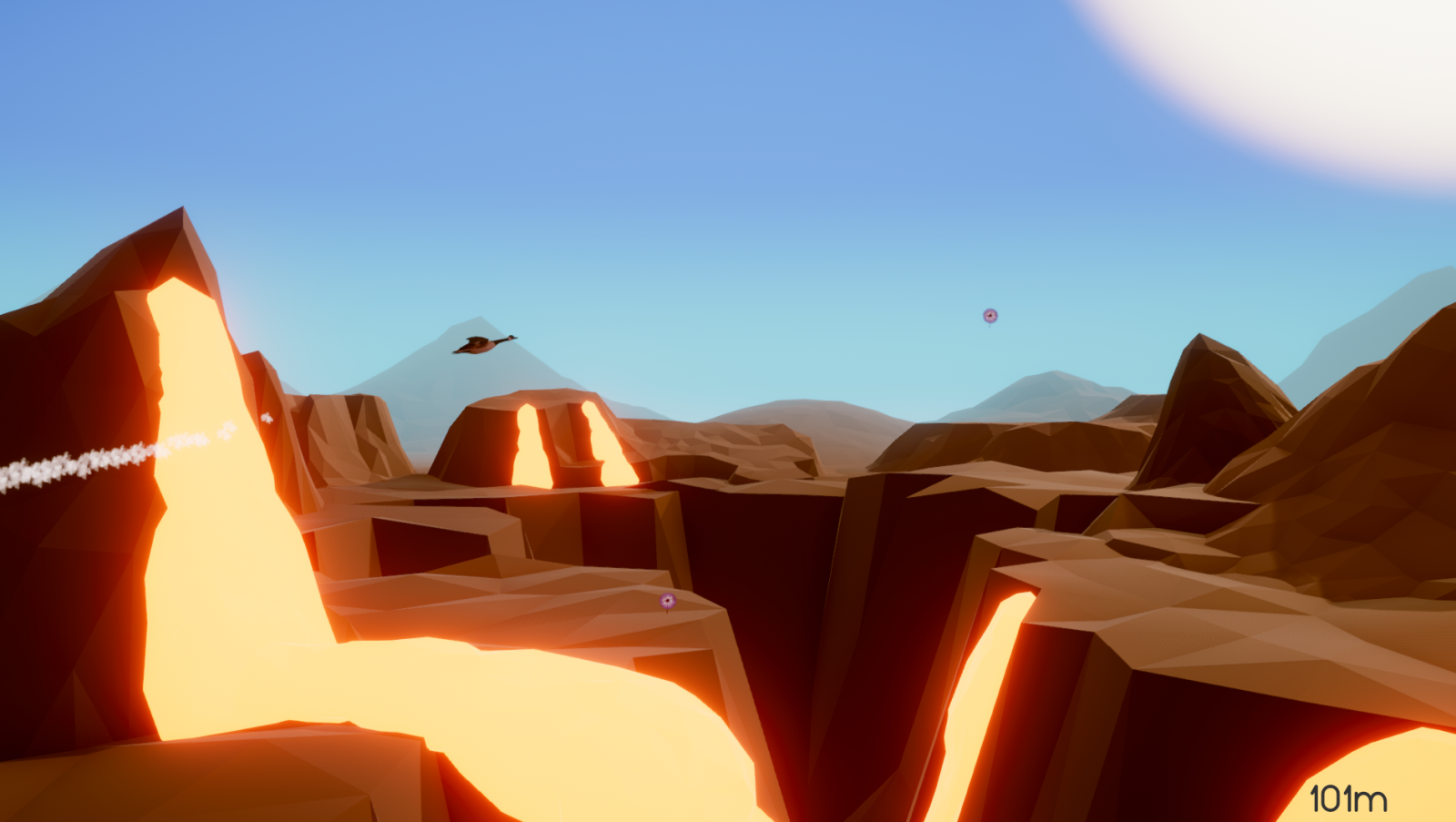 Gliding high above the sands of the desert are a flock of geese, and like the extinction of dinosaurs, an asteroid threatens these beautiful creatures – except without the catastrophic cataclysm in the end. A single goose is knocked out and lies unconscious. Though the opening gives the impression of action and destruction, Dune Sea is the complete opposite. It’s a relaxing, side-scrolling flyer where you, the goose, try to make your way back to your flock while navigating through beautiful levels that offer grandiose scenic views and challenging obstacles.

While you’ll encounter dangerous birds of prey and obstacles that look to crush you, the gameplay, level design, and music are all calming and tranquil. Upon taking flight, you’ll find yourself gliding through the air without a care in the world. The gameplay and mechanics are slowly introduced to you as you traverse beautifully crafted levels. Much like the Flappy Bird game, crashing into anything in the world will result in an instant crash and burn, leaving your goose cooked. Your goose has a stamina bar that will drain the longer you fly and use your special maneuvers, such as barrel rolling and diving. In the later levels, you’ll even find mountainous platforms that you can land on to regain your stamina. While flying, you’ll find tiny spores floating in the air that you can collect that will increase your stamina. Low-lying fruit on trees and other items can be collected to boost your stamina even higher if you’re willing to take the risk of flying low to the ground or flying dangerously close between rocky areas. Each level you play has its own theme and characteristics to them, and the obstacles usually play off of those themes. While some levels look beautiful and lush, others appear to be wastelands with fire or torrential sand storms. 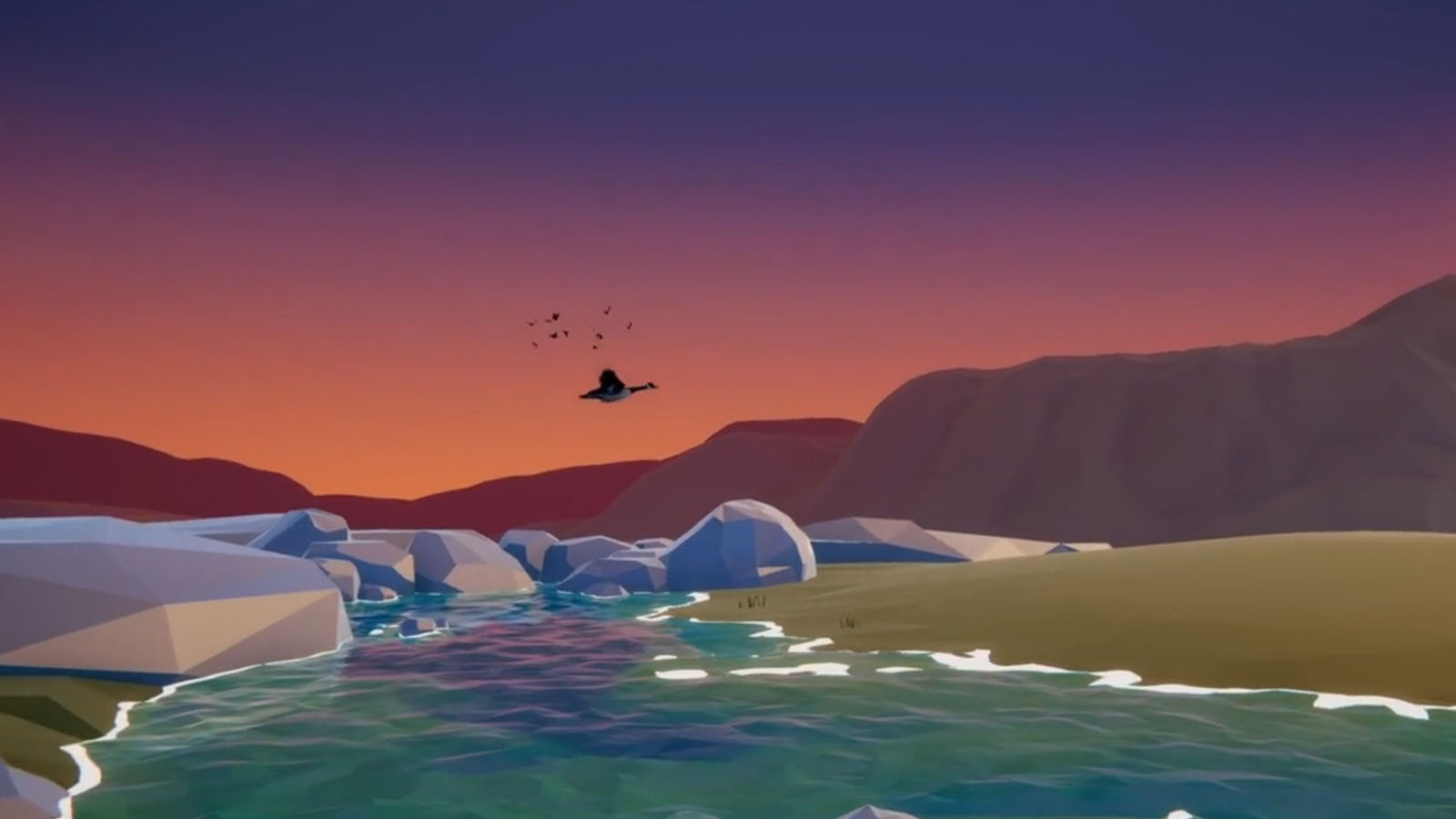 While all this sounds easy, controlling your goose is more trouble than it should be. Controlling and navigating the environmental dangers is part of the game, unfortunately your goose controls more akin to trying to maneuver the USS Enterprise in a bathtub rather than a nimble bird in the sky. At slow speeds, it’s virtually impossible to maneuver in any direction. The goose tends to drop like a stone, regardless of if you are holding the fly button. At higher speeds, much like a Formula 1 car, the goose moves more nimbly, able to dive and squeeze between tight spaces – but still feels like it has a massive weight is on its back.

When flying through the first few stages, learning when to dive and barrel role is essential to not crashing and finding yourself having to restart, over and over again at your last checkpoint. You can even find other flocks of bird that you can honk at and have one of them follow you. Sadly, the band of following birds can’t collect spores or fruit to refill your stamina meter. In fact, they often become stuck on rocks and other environmental objects in the area, leaving you to fly solo until the game unsticks them. Though the game is marketed as an adventure game, with its serene music, laid-back and simple mechanics, and beautiful scenery, it’s hard to see this as anything other than a relaxing flying simulator. The enemies don’t actually attack you but hinder you from moving forward. With many of the interactions with them easily being dealt with by simply flying through rings that act as a test of your controllability of your bird, most of the actual danger is in the horrid controls and glitches. Did I mention the game has a few glitches? 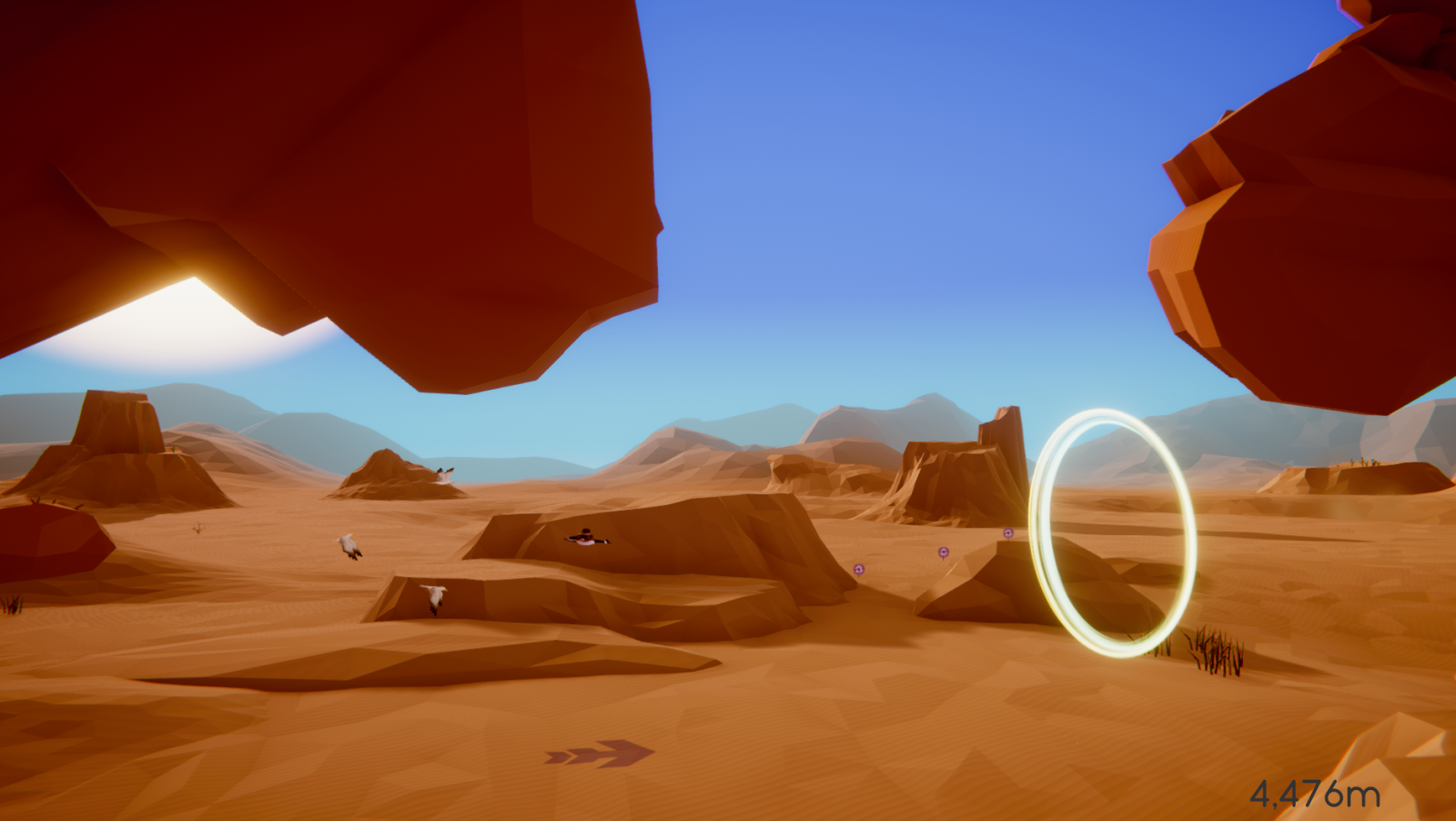 Ring around the nosey

My first play-through wasn’t as successful as my second. I often found my goose landing oddly or off its axis. Instead of landing feet first on the checkpoint stones throughout the levels, my goose would kamikaze belly first onto the stony platform, leaving me unable to take off again and reloading a previous checkpoint. Other times my goose would land on its side, walking like a drunk person down a dark alley on a bed of banana peels. With the controls feeling heavy and unresponsive at times, it’s easy to fall out of your comfort zone that the calming music has put you in. There’s nothing worse than losing and it being at the fault of the game.

Dune Sea plays more like an endless runner than an adventure game. Soaring high above the ground and through obstacles as you try and reunite with fellow geese is a relaxing and sometimes effortless breeze. When the game wants, it’s charming and has a lot of character, especially with its unique art-style and level design. Other times, the game mechanics and glitches will make you fall out of favor with your lovable goose.

T.K. is a freelance writer, narrative designer, and author. Writing and developing narratives and giving voices to digital world and characters is his passion. As a game writer, QA game analyst, and editor for Gaming Trend, he enjoys being a part of the gaming industry.
Related Articles: Dune Sea, Indies
Share
Tweet
Share
Submit