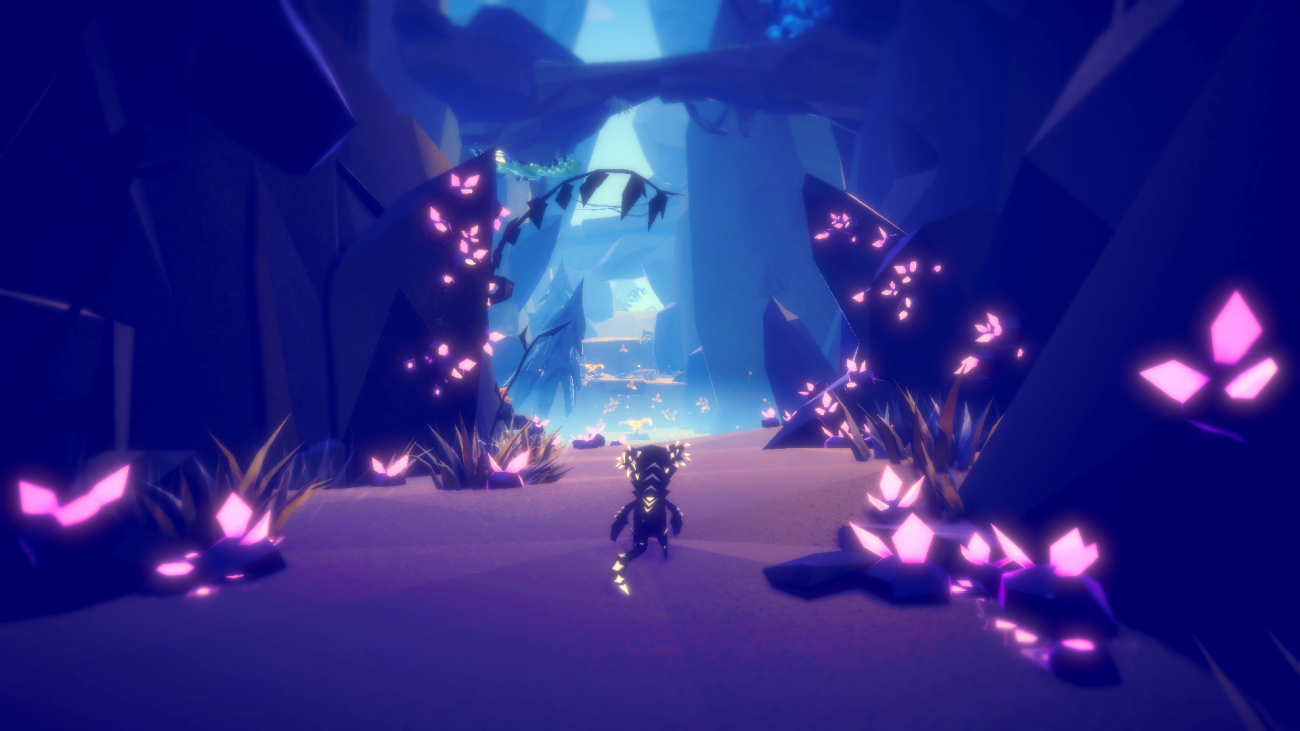 As soon as I saw the initial trailer for Fe, I was hooked on the beautiful colors and musical theme seemingly prevalent throughout the game. However, there was a small part of me that was worried it wouldn’t live up to the hype. Luckily, the game was exactly what I was hoping for—a musical foray through an enchanted living forest, providing hours of enjoyable game play.

You play as Fe, an adorable fox-like cub in the middle of a luminescent forest. The magical world Fe lives in has been infiltrated by “The Silent Ones,” who add an eerie silence to environments otherwise full of various melodies. These mechanical humanoid beings are capturing and experimenting on the various creatures of the forest, and your job is to save them. Throughout the game, you explore various areas in your attempt to free other creatures from the Silent Ones—from finding your way through dark caves with glowing mushrooms to hopping from lily pad to lily pad to cross lush swamps. The story isn’t particularly fleshed out, but instead uses environmental storytelling, providing insights using the stone carvings you find through your adventures. This isn’t a problem though—the game invites you to discover more if you look for it, but doesn’t force the story down your throat. It instead feels natural and light as you work to prevent and undo the Silent Ones’ damage.

One of the main mechanics of the game is the use of singing. You start off only knowing your own language, but throughout the game learn to speak to the birds, deer, and more. After you save certain beasts, they teach you a new language, which allows you to unlock areas previously inaccessible, as certain flowers respond to these languages and allow you to jump or soar. Due to the use of color coding, this process is intuitive and I had no issue figuring out which flowers to use at what time. I could consistently understand which flowers responded to which language, and when I needed to activate the various flowers. You can also change languages while soaring, allowing you to activate various useful flowers along your way.

In addition, you learn skills throughout the game that make your adventures easier, such as tree-climbing and soaring. You can learn these skills by collecting pink shards you find along your way—some of which are easily found along your path, others which are in difficult to reach places. I didn’t go out of my way to search for these shards, but found enough to develop the skills I needed for each level.

The controls are easy to learn and straightforward, using the buttons and triggers for various movements. The most interesting aspect of the controls is the singing mechanic—when singing with other creatures, you must hold down the right trigger at just the right level to match with the other creature, and that level varies depending on who you’re singing with. If you lightly pull the trigger, Fe makes little unintelligible noises, while pulling it down all the way allows you to sing at full strength—and you can go anywhere between as well. It’s a nice use of the Xbox controller mechanics, and makes the in-game singing even better.

Overall, the game is relatively easy–there are birds to guide you when you’re lost, and a map with markers telling you where to go next. The good news is that this prevents any rage-quitting, as I never got lost and frustrated. If you desire more of a challenge, though, you can easily turn off the map markers and choose not to employ the birds for help. I personally enjoyed having the birds as helpers–they didn’t tell you every single step to take, but merely where you were supposed to end up.

Fe is also visually breathtaking—everything in this world is responsive, with flowers lighting up or moving as they sense your presence or hear your song. There are musical swells when you enter certain areas, giving you the sense that you’re a part of something bigger. When I first entered a dark cave, lit only by the light of various glowing mushrooms, my jaw dropped. I’ve never had a game’s aesthetic line up so perfectly with my own. I wish I could see this world firsthand, and be a part of it. Luckily, this game let me temporarily lose myself in it.

There were only two real problems I had with Fe. First, the game starts to get old after playing for a few hours. I ended up playing through it in a handful of 2-hour sessions, as once it reached that point I would start to lose interest. Due to the sweet and innocent nature of the game, there’s little drama to keep you hooked and the stakes never feel particularly high. The second problem came from the tree-jumping mechanic. A difficult part of the game requires you to jump from tree to tree, but they’re all moving. While I would consistently hit the trees I was aiming for, I couldn’t for the life of me figure out why I could sometimes grab on to the tree and other times bounce off. When I fell, I’d end up back at the beginning and have to start the process all over again. I did finally finish this level, but part of the magic of this scene was hampered by my frustration.

Overall, this game provided a magical experience, and one I cherish. While I don’t have a strong desire to replay the game currently, I may find myself back in this world when I want a peaceful and enjoyable escape. Fe is a great success for EA Originals, and hopefully indicates more fantastic games to come. While it’s not be a game for those looking for constant action, it’s an incredible journey to a magical world where music and beauty abounds.

EA Originals’ first game, Fe, is a beautiful and whimsical platformer that takes you on a magical and musical adventure though a colorful Nordic-inspired world.

Born and raised in Los Angeles, Maddy has been addicted to video games since watching her dad play The Secret of Monkey Island when she was 5 years old (though it took her another 14 years to finish the game). In addition to playing video games, she's a proud cat mom, a lover of bad jokes and dark eyeliner, and a terror on the dodgeball court. Maddy is currently pursuing her MBA at UCLA Anderson and starting in June, she will be interning at Riot Games with the Player Growth department.
Related Articles: Fe
Share
Tweet
Share
Submit