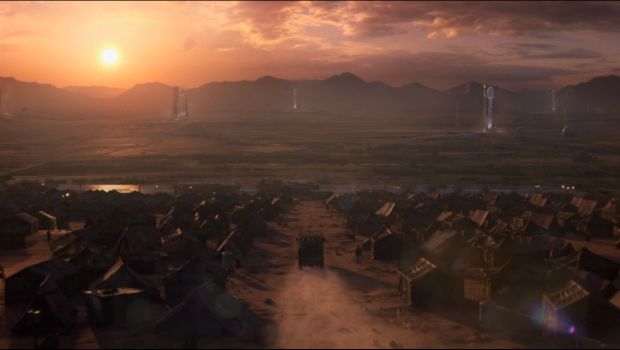 Sid Meier’s Civilization series has enjoyed a long lasting and beloved place in the halls of gaming history. It’s tenacious, creative, and often quirky approach to interactively retelling the history of mankind via strategic turn-based gameplay is second to none, and can easily be considered a standard for how the genre should be done. For many players, it’s rarely a question of whether or not a new entry in the franchise will be good, but rather, how good will it be?  I must modestly admit that after several days (and several missed meals) clicking through the world of Beyond Earth, I think 2K Games has another winner on their hands.

As Beyond Earth begins, we are introduced to a future vision of our planet that mankind has successfully rendered uninhabitable. Oceans stand as empty wastes and our once blue skies are caked thick with generations’ worth of pollution. In an effort to save the last vestiges of our species, humanity has gathered together into several factions who have found the means to take some lucky survivors to the stars and rebuild. However, while they share a common ultimate mission, these groups are radically different in what they believe lead to this apocalypse and what steps are required to avoid another such catastrophe. Some have bowed to spiritual enlightenment, while others feel order exists down the barrel of a gun. This means whether Earth’s greatest mission proves to be our salvation or final death throes is up to you, your wits, and a whole lot of careful menu navigation.

Considering the depth and density of the systems Beyond Earth incorporates, the title is elegant in how it presents itself to players new and old. From the moment you begin, you are approached with a short list of tutorial options ranging from “are you new to Beyond Earth” to “are you new to Civilization”, so as to best acclimate yourself to the challenges the game has to offer without needless frustration. As you quickly navigate your way through these options, they will calibrate the level of interactivity your ADVISOR, the game’s tutorial avatar, will have with you over the course of the adventure. Whether you want to be alerted every time an option is available or not is just as much up to you as the options themselves, making this title extremely approachable to even the newest players. For veterans of the series, there is an entire host of ways to make the game more ruthless and tailored to your wildest, virtually-masochistic dreams. These range from (but are not limited to) turning off the ADVISOR entirely and plunging blindly into the challenges of the frontier, extra hard difficulties, various map layouts, and the erasure of descriptive icons. There is a lot to play with here, even before the game begins, and that’s something any strategy gamer can appreciate.

The presentation of Beyond Earth is in no way disappointing (at least to me) but, aesthetically speaking, perhaps not quite as flashy as some might expect for this generation. The various icons and units are thorough in design, but not particularly detailed compared to other titles of the same genre. The units are, however, extremely functional, and scurry across the map seamlessly and intelligently. Many units are extremely capable of surviving without your step-by-step direction unless you place them directly in harm’s way, and even then their resilience never failed to surprise me. Also, what the game’s representations may visually lack in grandeur they more than make up for in diversity. As an extra spin on Beyond Earth’s vision of our species’ manifest destiny, just because you arrived on this new world human, doesn’t mean you have to stay that way.

Depending on how you play the game or set-up your ADVISOR, you will quickly come to find out that humanity’s evolutionary path is likely to diverge in one of three unique directions. Your people can either protect and stabilize their current forms (Purity path), find solace in the cool, calculated fusion of man and machine (Supremacy path), or release themselves entirely from the world they once knew to more fully embrace the wonders of the place they now live (Harmony path). These Affinities, as they’re called, despite their considerable differences, are not entirely exclusive until you are quite a ways down any developmental path. Just because you make one choice that boosts your affinity toward the Supremacy culture doesn’t mean you can’t chart your people’s course back down the path of Purity, and depending on your ADVISOR settings, you will be aptly warned where your decisions are taking you. But just like any great strategy game teaches you, knowing where you want to end up can be just as, if not more, important than how you get there. The writing is often times literally on the wall, only in Beyond Earth they are called branches and leaves; which brings us to the gameplay itself.

Beyond Earth plays just like your standard turn-based strategy game. You begin with a small settlement, flanked by or in possession of whatever units or materials you selected before your journey began. After this initial land-grab, you begin going about the task of making your people the kind that can better survive here, or making the planet more hospitable to them. This is done by researching the various sciences and skills your population managed to remember, load, or glue onto their various ships, which is a lot, but far from everything humanity was or is capable of. Reclaiming and advancing these techniques is done via the Tech Web, a … well… a web of educational options that you must direct your people to focus on. Each arm of the web is called a branch, which are broad areas of focus, and connected to each branch are a series of more specific advancements called leaves. When and how you maneuver your studies across the Tech Web builds the foundation of your people’s immediate future, however, it isn’t always the most important area where your decisions will lie.

Even at its most benign, the new world humanity has chosen to settle doesn’t want it there. From nests of vicious aliens, gargantuan city-crushing worms, and corrosive fogs that waft across the landscape, you and your competitors may find yourselves working together a lot sooner than vying for ever shrinking territory. Even when the natural threats have subsided and the time arrives for humanity to crawl atop one another like lobsters in a tank, warfare will not always come in the form of gunfire. Corporate espionage, propaganda campaigns, and shifting allegiances will all come into play in Beyond Earth’s various scenarios. Sometimes one by one, and sometimes all at once. Evolving your own understanding of how the title functions and developing your multi-tasking capabilities is just as crucial as forging the most deadly army (although the later does have its merits).

There really is a lot of great things going on in Beyond Earth, and you’ll quickly find yourself in the future as the hours blow by behind its helm. Despite looking for, and poking, and even trying at times to break the thing, there was very little to dislike about this game that wasn’t already compensated for by the elasticity of the options and settings you have at your disposal. All of the game’s functions, history, and details are easily accessible at any time, but not all required to play and have fun. The music is soft and poetic while you explore and create, and subtly more invigorating when you engage in battle or face a threat. The colors manage to meld together without smearing into an incoherent mess. Everything just seems to work.

Really, the only question is whether or not this game will be to everyone’s taste. Will certain aspects of this title strike a player as familiar, or stale? Will Beyond Earth’s largely traditional presentation lack the flair and pizazz that some expect out of a genre with so many entries that do exactly that, or will the substance over style approach strike them as more worthwhile? While I didn’t even have necessary TV/monitor to run it, the version of the game I played didn’t include the 3D capability the final release is purported to have, and maybe that will make all of the difference to some. In any event, I can’t help but say Sid Meier’s Civilization: Beyond Earth is an enormously fun and well-crafted strategy game worthy of its pedigree, offering various exciting challenges while also daring you to challenge yourself.

Sid Meier’s Civilization: Beyond Earth is a great and easily approachable game. The intuitive interface and flexibility of the numerous options make it an easy “yes” for any strategy gamer or Civ fan looking for something more than Earth’s history may have to offer. While the visual and stylistic choices may not prove to be to everyone’s tastes, there is plenty of both new and familiar to satisfy anyone willing to hop on aboard and see where Beyond Earth is able to take you.