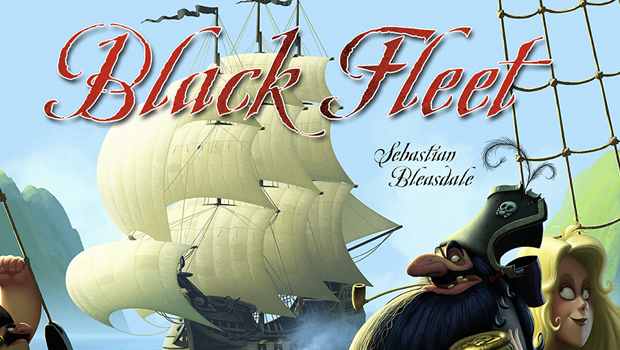 You are sailing across the seven seas. Salty air whips cross your sails, filling your lungs with the power of the ocean. You are about to head to port and deliver goods that will pay nicely. You will get a payout that will earn you enough money to win the heart of the governor’s daughter. When suddenly you see another ship approaching. You hope it is nothing until you notice them raising a flag… the frightening Jolly Roger. Pirates! Will you rule to seven seas or find yourself at the bottom of Davy Jones’ locker? Try your luck at Black Fleet to find out!

Black Fleet is a 3-4 player, pick up and deliver game with slight card management. Each player starts the game with one merchant ship and one pirate ship.. Like you’d expect, merchant ships visit ports and pick up supplies. They then travel across the board to deliver these goods to other ports. Pirate ships however, cause this to not be such an easy task. Pirate ships can attack adjacent merchant ships and steal cargo from their stock. The only way to defend against pirates is to call upon the Navy. If the navy ship sails adjacent to a pirate they will sink the ship and save the merchants, at least for one more turn.

The movement of ships in Black Fleet is decided by movement cards. Each card depicts three ships; a merchant ship, a pirate ship, and one of the navy ships. Each ship picture is associated with a number that represents the movement allowed. The movement cards also tell the player to either pick up or discard one or more treasure cards. The Treasure cards give a one time perk to players, letting them bend some of the rules of the game or get paid more for their cargo. After selecting a movement card, the player moves the ships the appropriate amounts and is allowed one action per ship. Actions include pick up, delivering, or stealing goods, burying treasure, or attacking other ships.

Throughout the game you gain doubloons for different actions. Delivering goods gets you x doubloons per good, depending on the port, and sinking ships gains you doubloons as well. These doubloons are then traded in to gain more abilities for your crew. Each player has 4 ability cards in front of them, including one that is the governor’s daughter. Each card has a numeric value. To gain the ability on the back of the card, players must pay the amount depicted. Once you have the first 4 cards active you can then earn enough money to win the heart of the governor’s daughter. The player who has flipped the daughters card, and has the most doubloons, wins.

One of the most notable things about Black Fleet is the unique way goods are held by the ships and the high quality components. The doubloons in this game are great. The art on the coins add to the pirate theme and they have a very satisfying weight to them. The best components of the game are the ships. There are spots in the ship miniatures for the good cubes. It is a very cute and creative way to physically move the goods around while enhancing the theme. One down side of the ships is that even though the spaces to hold the cargo are helpful they can be very difficult to actually get the cubes to stay on the ship. Its possible that this is a problem that only those of us blessed with sausage fingers can relate too, however it is annoying all the same. Another issue? The spaces on the board that the ships move across are not always large enough to contain the ships. Is this a big deal? No. But they did such a good job with the design of this game and it’s components that it should have been addressed.

Since I mentioned the design of the game lets take a moment to visit the game art. The art in this game is fantastic. All of the illustrations were done by Denis Zilber. Has anyone heard of Pixar? Yea. He’s an artist for them. Not only is his art stickin’ cute, it is also is very thorough. Each illustration goes along with or enhances the card. The theme is strong throughout black fleet and part of this is due to Zilber’s attention to detail. Another thing I can’t help but to mention is the box insert. It is in the shape of a skull and crossbones! It is a small detail, and not one that affects the game in any way, but it is thoughtful and that amount of detail shows how much they care about Black Fleet.

Black Fleet is a good game. Not fantastic, but more than mediocre. I would like a bit more replayability, which I think really could be added in an expansion. Another thing that needs visiting is the balance of the ability cards. Some ability cards are clearly stronger than others. If one player gets a few of these strong cards, the other players have a hard time catching up. My gaming group has been throwing around the idea of a house rule involving drafting cards or limiting abilities so things are a bit more even.

Last thing I will mention is that the age range of this game is a bit weird. Everything about this game makes me feel like it should be for kids. The art, the components, the theme, but then I think about it more and I’m not so sure I would have kids under the age of 10 play. Some of the treasure cards are hard to understand, and I’m not so sure how I feel about kids getting used to the idea of being able to ‘buy’ a wife. Also there is a HUGE opportunity for backstabbing in this game. My 20 something husband gets upset when someone picks on him too much in this game, I can only imagine how a kid would react. Right now, I think without some rule adjustment this one should be left for the adults. But what do I know, I don’t have kids. Maybe parents would disagree. 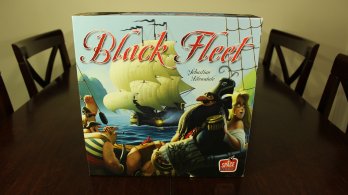 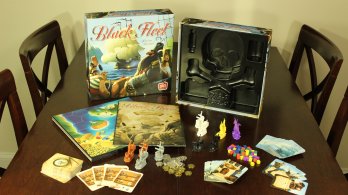 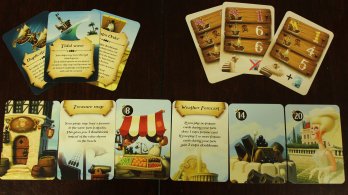 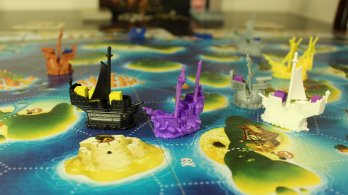 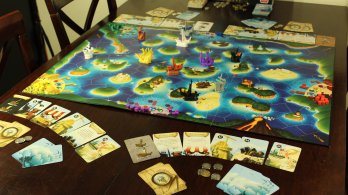 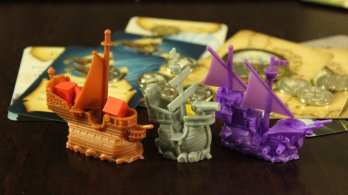 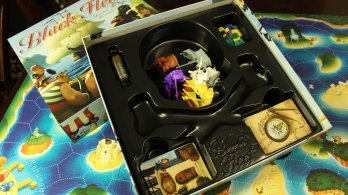 Black Fleet is an easy to learn and even easier game to play. The art and components are undeniably what makes this game so strong. This is definitely one I would play with new and seasoned gamers alike.

I haven't always been a gamer. Roller Coaster Tycoon was about as gamey as I got until I met and married my gaming husband. Since 2010 we have been playing every game we can get our hands on. I am drawn to games with high player interaction, superb art, and strong themes.
Related Articles: Tabletop
Share
Tweet
Share
Submit