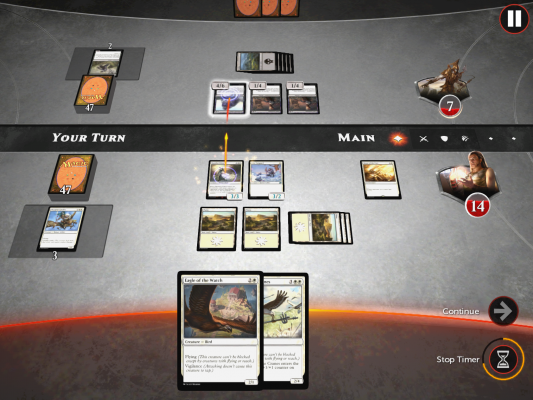 In the realm of Collectible Card Games one name stands at the top of the heap. The grand-daddy of them all, Magic: the Gathering still reigns supreme as the most influential, popular, and financially successful CCG of all time. A new electronic edition of Magic will be available on both iPhone and iPad, Steam, PS4, and XBOX One.

Magic has maintained a presence online for quite a while now; first in 2002 with Magic Online (still the home for the most hardcore players looking to practice for upcoming Pro Tour matches), and more recently via their ‘Duels of the Planeswalkers’ series (first released in 2009). In all versions of the game the core concept has remained the same: Recreate the physical card game and provide a venue for players to both learn the game and hone their skills against opponents online. Magic Duels: Origins continues that trend with one noticeable change to the tried and true formula Wizards has been using for the last several years.

Magic is a game where two or more players pit customized decks of 60 cards against each other as dimension-hopping wizards known as Planeswalkers. The cards within your deck act as both the creatures, artifacts, and spells you’ll use during a battle, as well as the resources needed to bring them into play. Players win by either bringing their opponent’s health to zero or running their opponent’s deck out of cards. When constructing their deck, a player has 5 color affiliations to choose from when selecting the types of creatures and spells that will comprise their deck. Each  color represents certain strengths and weaknesses within the game, with a small number of cards having no color-affiliation (representing both magical items and resource-producing lands) and are used to round out a deck.

After logging in, a player is directed to the game’s unskippable tutorial section. While it makes for a top-notch introduction to the game, for those who’ve been playing Magic for any length of time the tutorial serves as a fairly boring point of entry. After passing through the tutorial a player has the choice between Story Mode (training missions as each of five iconic Planeswalkers using preconstructed decks), playing solo against an AI, playing against other humans, and teaming up with a partner to fight another team of players in Two-Headed Giant mode. Options for managing your existing collection of virtual cards, creating new decks, or fine-tuning your current deck are also accessible from the main screen. Compared to the relatively basic storylines we’ve seen in previous years, Origins succeeds at creating enjoyable plotlines to play through. Unfortunately veteran players will probably have the entirety of Story mode dealt with in a few short hours.

During a match the play area is uncluttered, with information such as the number of cards remaining in a player’s deck, their current life total, and what’s currently in their hand all clearly displayed on-screen. Additional information about a card can easily be called up, but the default view sits comfortably at a very minimalist level of information. Given the number of cards that can quickly end up in play mid-game, this important design feature shines in four player games. The background music varies from enjoyable and subdued to bland and repetitive, and will most likely be set to silent after a dozen matches or so.

Thus far everything mentioned has represented a refinement on the tried and true formula that Magic has been updating since 2009. What’s new? As expected, Magic Duels focuses on the newly released ‘Origins’ set of cards. Though some are reprints of earlier cards, a substantial number of them are completely new to the game entirely and many of the reprints have not seen online play in quite some time. Beyond that, the powerful ‘Planeswalker’ cards are now finally accessible for use, a change vital to keeping the electronic game relevant as a teaching method for those looking to learn the physical game. The game’s AI has also seen significant improvement behind the scenes, with a more refined ability to analyze the battlefield and determine the best way to oppose the player. Options exist for choosing 3 levels of varying AI intelligence when playing a match against the computer.

The most fundamental shift that Origins introduces however is its payment model. Unlike the 2015 edition of Duel of the Planeswalkers, Magic Duels has switched to a ‘free to play’ model wherein the game can be downloaded at no cost and any card can be unlocked simply by playing the game. With 251 cards in the set and up to four copies of any card being allowed in a deck, assembling an entire collection can take some time (though a fair selection of free cards are added to a player’s account by the close of the tutorial). Following the model established by such games as Hearthstone or SolForge, daily quests can be completed to generate a small amount of the in-game currency. Even playing a solo match against the game’s AI comes with a small reward attached.

But the new system is a double-edged sword. While friendly towards players looking to simply try out the game or better prepare themselves for the physical version of Magic, those looking to create powerful, competitive decks won’t be able to assemble a large enough collection from in-game daily play alone. As of the time of this review, a pack of 6 cards runs 150 gold or $1.99 cash. Paying $40 drops the price per pack to $1.25, but that represents a rather hefty up-front investment. Given the random distribution of cards in a pack, expect to pay anywhere from $40-$100 to establish a solid collection of cards, with $200 collections being very possible if a player is looking to obtain four copies of every card relevant to their deck. This represents quite a change from last year, when a one-time purchase would unlock the game or an additional expansion. Unlike previous editions Magic Duels will now be a persistent collection. Cards you unlock this year will be available for use next year. This makes the increased cost much easier to swallow, as well as opening up the opportunity to create a truly massive collection of cards long term.

On the whole Magic Duels: Origins is a remarkably balanced product. For those interested in entering the world of collectible card games, this is one of the most accessible entry points to the hobby. For those looking for a groundbreaking new experience, you may have to look elsewhere. For those simply looking to have a good time flinging some new cards at an opponent, you’ll find exactly what you’re looking for here.

Magic Duels: Origins breaks very little new ground, but the formula has been polished to a beautiful finish over the last several years. The micro-transaction model may hamper the enjoyment of those players looking for a more straightforward gaming experience.