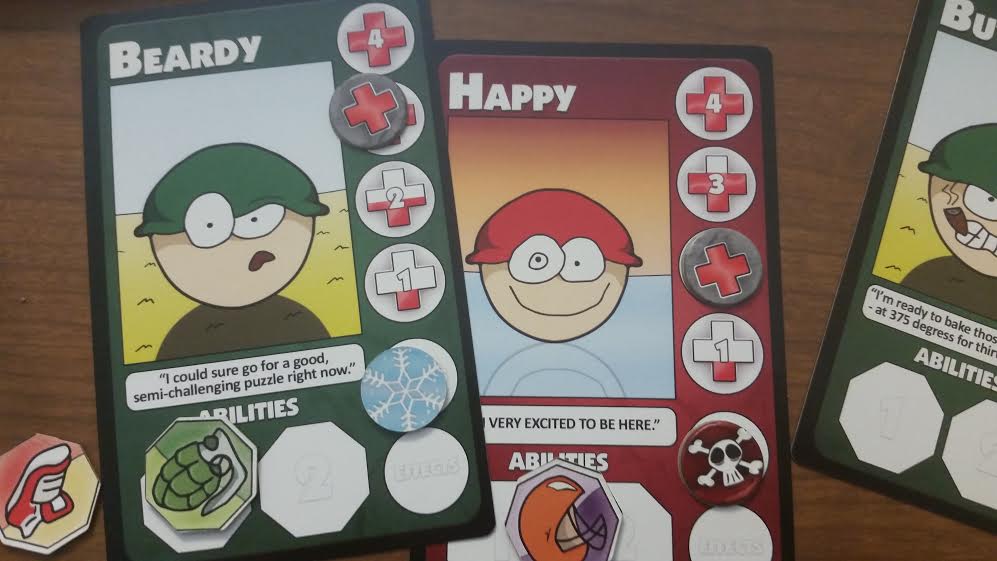 When I first reviewed PWNs a couple of months ago, it was safe to say that it had earned a place in my Pantheon of worst games ever. The general concept of the game was good, which remains moving South Park lookalikes around on a board to attach each other, but the application left much to be desired. Movement and attacks were bland, strategy was minimal, and the end game was extremely predictable. So why am I looking at it again? Well, give credit to PWNs designer, Ryan Boyle, who realized that the game had untapped potential and decided to go back and see if he could get PWNs to reach it. The result is a game that may have retained a few of its quirks but has greatly improved its chances of creating a solid fanbase.

The biggest issue with the original incarnation of PWNs was the overall lack of personality in game play. It was a major let down after looking at the box and card art and getting the sense this could be a lighthearted strategy game. Boyle has gone a long way into fixing this. Randomized abilities are now use to give each PWN its own personality such as allowing extra movement or increasing the range of projectile attacks. The effect of this change carries as a bonus to strategic play as well. A heavy-hitter, with his ability to deal extra collision damage, may charge into the fray while a weaponeer and his extended range will want to hang back for attacks. Each unit starts with one ability but can gain an extra by eliminating an opponent. This is my favorite addition to the game and adds some much needed individualism to each member of your team.

Ability tokens give each PWN some personality, while effect tokens hurt your PWN.

The personality influx extends beyond the characters. The card deck has also received a major overhaul. Originally, nearly all attacks were worth one or two points. Now, many attacks can deal from one to three damage. Other cards have variable damage results based on a die roll, and there are even some that dish out devastating effects such a poison or constriction. The best news from all this is hand management now matters. Holding a heavier attack to knock out an enemy becomes a viable strategy now. Additionally, Boyle added in more counter cards, which help counter attacks on your PWNs. It’s nice to know your chances of blocking a powerful attack haves increased. No longer will the game’s winner necessarily be who lucked into drawing the best attack cards.

Boyle also had the foresight to not change some things that already worked well for the game. Terrain still plays an important role in movement and attack. Combos can still be set up allowing you to bump a player’s PWN into another to inflict more damage. This still creates a double-edged sword since there’s no advantage in keeping your team together. Spreading them out does little to hurt your cause while preventing your opposition from hitting your with those catastrophic combos. This will eventually make setup and movement somewhat predictable.

The diversity in card play options is a huge improvement from the earlier edition of the game.

Despite all the improvements, the game is still not completely free of annoyances. A two player game will still degrade into a pushing match once someone gets a lead. Even without combos, the trade off in health points is worth it just to shove the second place player around. I wouldn’t recommend this as a fun two player experience. Boyle did help correct this in multiplayer games. The game now ends after one player has lost all their PWNs. In this case, victory points are awarded based on the remaining PWNs on the board and their corresponding health. This is a nice addition in that the players that have been knocked out don’t have to sit around watching the remaining two push each other around the board.

That said, PWNs is a significant improvement from its lackluster earlier version. There’s a sense of personality and strategy that wasn’t there before. It’s still a bit of a sophomorish game that refuses to take itself seriously, which makes the game perfect for those that enjoy an over the top style experience. While I would still recommend other light strategy games over this, Boyle has put a lot into making PWNs a workable title. A designer with that much commitment is worth keeping an eye out for.

Significant improvements make PWNs a much more playable game now. There's still some quirks, and I certainly wouldn't recommend this for just two players. Those that do enjoy off the wall humor mixed in with their strategic gaming will find some enjoyment in this.