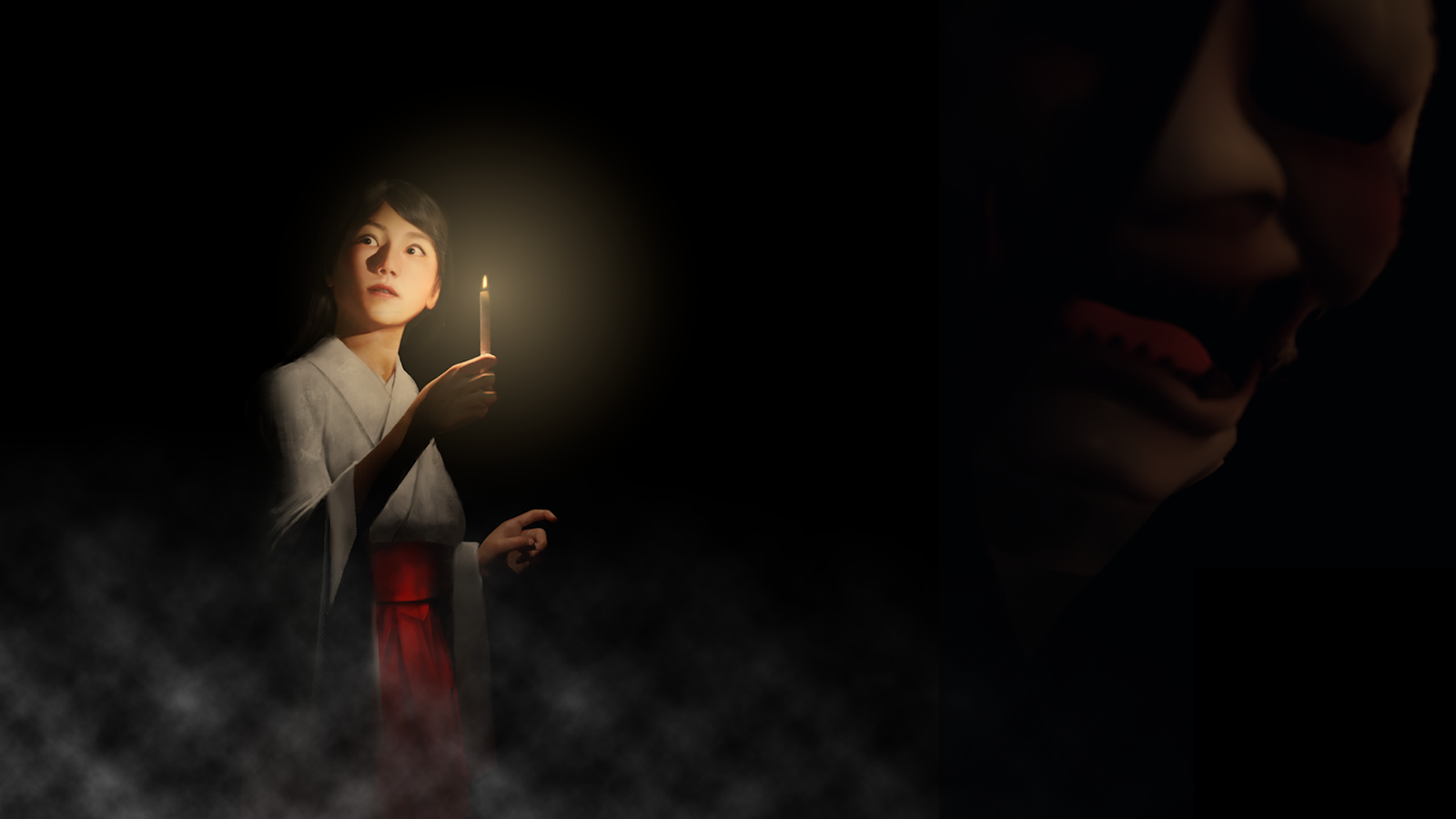 A shrine hidden deep in the woods has a dark secret and a new evil has come forth in Ikai. The freshman team at developer Endflame are making their debut with a little indie psychological horror game based at a feudal Japanese shrine where Naoko and her uncle, the priest, attend to their duties. On one fateful day, Naoko is plunged into darkness as a new demon arises, threatening the shrine and the villagers nearby. It’s up to Naoko to discover the truth of this new danger and stop it before someone else gets hurt. 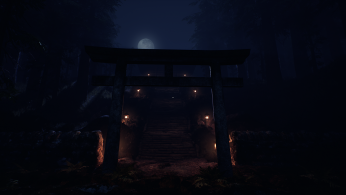 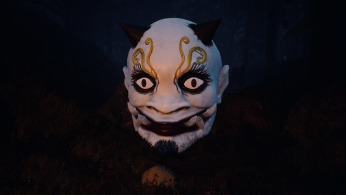 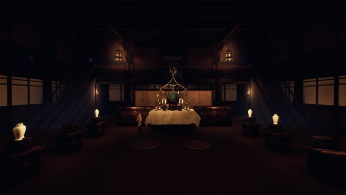 As a person who’s never really been much into horror games, something about Ikai had me curious. The game opens up to a seemingly peaceful courtyard at the shrine but with the warning of growing unease amongst the villagers. After her uncle leaves to go be with the people, Naoko makes her way out of the shrine to go wash some laundry in a nearby pond, but the further she goes the more foreboding the path becomes. Eventually she blacks out and awakens later that night and returns to the shrine to face the darkness within.

The story of Ikai took some unexpected turns. One person’s salvation becomes another’s nightmare and over time you might find yourself feeling sympathetic towards your foe. As you dive deeper and deeper into the story, you come to find that some actions may have unexpected consequences for other people. By the end my heart ached.

Like other games in the genre, you are not able to fight back against the forces that hunt for you. I found myself having to crouch walk around a lot in order to avoid being noticed while at other times I would have to sprint in order to not get caught. Throughout the game you have to write seals to ward off the many monsters you encounter. These seals aren’t always easy to make. Using your controller or your mouse, you have to trace a pattern on a small piece of paper, but the controls to move the brush aren’t very smooth so sometimes you have to try to repaint a line before it works. Then you have to take the freshly drawn seal back to whatever cursed object or doorway needs fixing before being found. 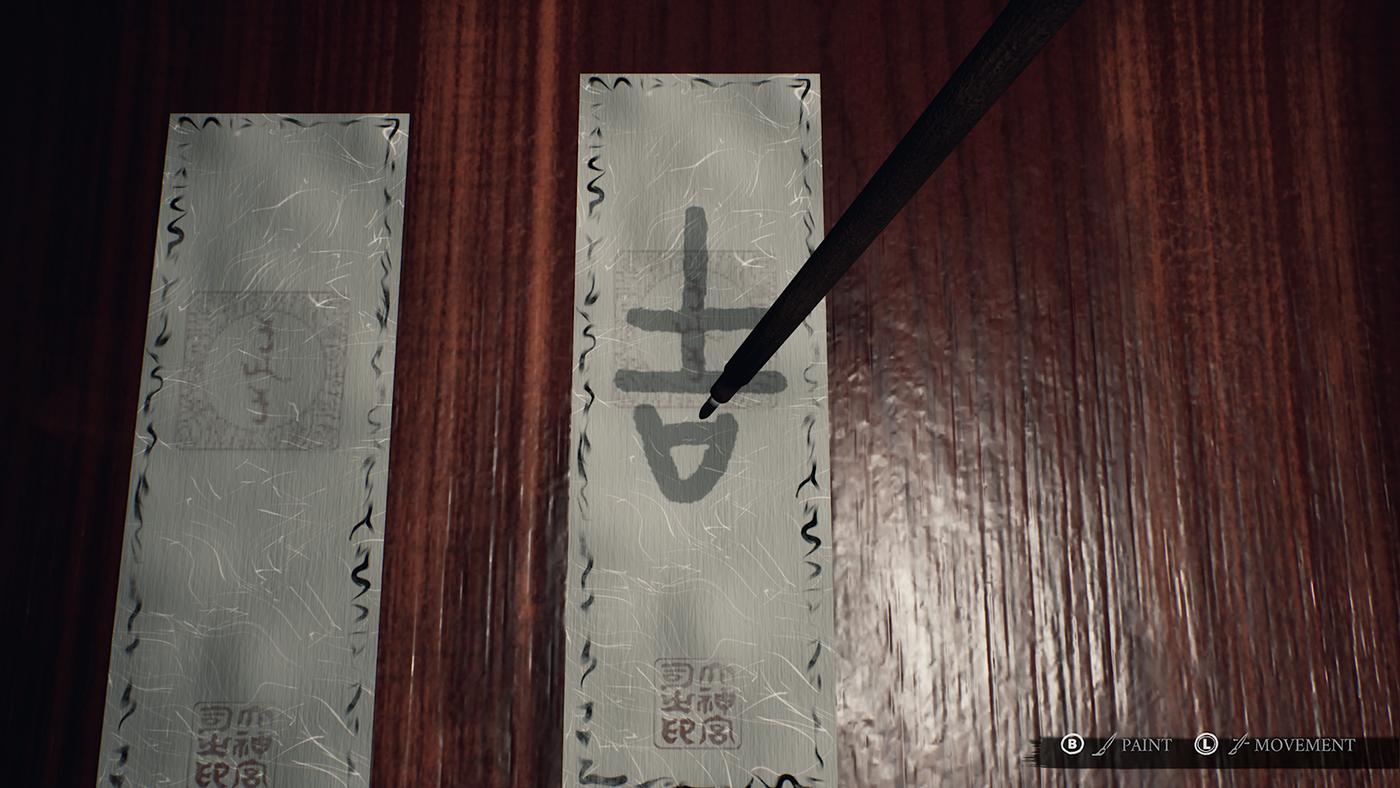 Throughout the game you will also be presented with a series of puzzles to solve to help you navigate to the next area. Find hidden passageways, open locked doors, and gain access to vital tools to aid you on your journey. However, some of these puzzles are truly… puzzling. If you aren’t well versed in different types of puzzles you may struggle a little. I had to do a couple of searches and even call in backup to try to get through a couple of these particularly tricky enigmas. But once they were solved, I felt that sense of accomplishment for overcoming them and charged (quietly) forward.

The further I progressed through the game, the easier it seemed to become and, I won’t lie, some of the fear factor started to wear off towards the end. By the third major encounter, I’d lost all sense of caution and started sprinting through the halls as it seemed as if nothing was actually chasing me. It also so happened that some of the puzzling turned out to be more of a trial-and-error affair, simply selecting a different option than before or taking a different route until I found the correct one. By the end of the game, I was more eager than anything to just reach the end and come to the conclusion. 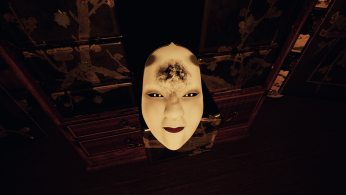 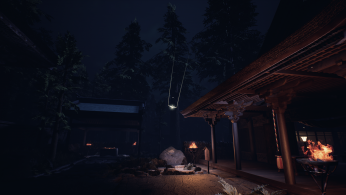 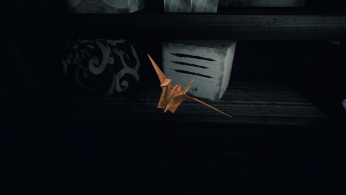 That conclusion can actually be reached rather quickly. Overall, the game can easily be completed in less than an hour, unless those puzzles really start getting to you. The game is very straightforward in its progression, so there isn’t much opportunity for replayability outside of trying to collect all the hidden items found throughout the game as well as getting all of the achievements. I found the story to be a very beautiful, if also saddening, one. I definitely did not expect it to turn out the way that it did, but the game actually ends on what I feel to be a huge cliffhanger. While I don’t think this will necessarily result in a sequel to this story, it still left me wanting more. I enjoyed the little time overall spent in this little piece of the world, and definitely would not mind returning to it.

Ikai is a wonderful entry into the psychological horror genre. The story is intriguing and beautiful in its own way. The spooky music kept me feeling on edge, giving away no hint of any looming dangers, adding that much more to my sense of unease. I just wish there had been more of it.

Cassie Peterson is an Editor for Gaming Trend but also a sporadic content creator and exceedingly average Rainbow Six Siege player. She goes by MzPanik on Twitter and Twitch and all of the gaming platforms.
Related Articles: Ikai
Share
Tweet
Share
Submit