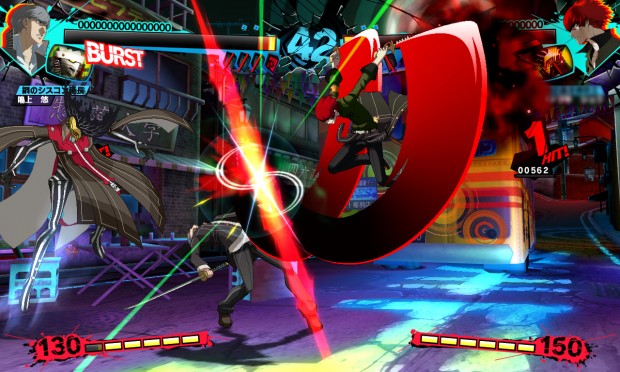 The Persona series has been known for their entries in the RPG series, but Persona 4 Arena was an unexpected offshoot. Taking characters from an RPG game and placing them into a fighting game seemed a bit odd, but it turned out to be a surprisingly good fighter. However, it seems that these days you can’t release a fighting game without having a new update containing new characters and tweaks, a practice perfected by Capcom. Now we are brought Persona 4 Arena Ultimax, a follow-up to the original.

Other fighting games could take a page from the tutorial included in Ultimax. Starting with basic steps, the tutorial instructs the player how to move and make simple combos to gently leads to the more advanced moves with multiple button presses and multi-hit finishing moves. Each portion of the tutorial makes you practice the presented move, but it doesn’t beat you over the head by making you complete advanced moves several times before moving on. A practice mode allows you to go up against a standing AI character which replenishes its health instantly. Knowing what kind of damage is done by your moves and how much energy special moves need can help your fighting proficiency.

If you are unfamiliar with the Persona series, a story mode helps you get acquainted with the characters. Taking place shortly after the events of Persona 4 Arena, General Teddie has decided to host the P-1 Climax fighting tournament. Everyone who fought in the previous Arena game returns along with a few additional supporting cast members. You can go through the story mode from the Persona 4 character perspective, but once finishing that, you can do the same from the viewpoint of the Persona 3 characters. However, this mode seems to concentrate on the story and puts the fighting to the background and more suited for fans of the Persona RPG games, as it talks about the Midnight Channel and the TV world without giving much explanation about what it is. These sections are also text-heavy with interactions occurring by talking heads. Taking in the text can be laborious, to the point where you just skim over the dialogue and continue to hit the X button to advance it before the characters finish what they are saying. You won’t lose much by skipping the story mode, and I recommend it if you just want to get into the fighting.

The arcade mode lets you fight with a small semblance of a story, much like an arcade mode of other fighting games. You’ll fight a ladder of characters individually until reaching the end. The five difficulty levels ensure that you can play against a challenging AI before moving against others people. Playing solo here is one of the better options within the game.

The fighting system was created by Arc System Works, who also created the Guilty Gear and BlazBlue series. The influences of those games are evident by the system implemented in Ultimax. Four attacks make up the move set. A weak and strong attack made by your character are available, but each player has a weak and strong Persona attack. These Personas are reflections of the psyche of the characters, giving every character an extra level of depth. Persona attacks require energy, so they aren’t able to be produced immediately. They also need to be performed at the right time, because when your Persona gets hit you also lose health.

Ultimax has a surprising amount of depth, but that’s not surprising considering the developer. The weak attack can be comboed into a multi-hit barrage, making it easier for beginners to land hits. The frantic action gives button-mashers a chance. After a normal character has less than 40% health, they become awakened, giving them extra energy and defense that will hopefully help overcome their foe. However, as you learn how to take advantage of the combos, advanced strategies like the Burst mode and multi-button combos become easier to perform.

Another new addition to Ultimax are the Shadow forms of most of the characters. Their normal attacks and defense are lower, but they have the ability to carry over their special power energy across matches and perform a move that grants them infinite energy for a short amount of time. These are definitely more technical, making them a challenge for advanced players to aspire to. These Shadow forms almost double the roster, but it would have been nice to have an even larger cast of characters than what is provided.

Visually, Ultimax looks great, with fluid animation highlighting the particle effects. While the color palette is more muted than other fighters, it still shines. If you are used to the over-the-top flashiness of Marvel vs Capcom 3 or Street Fighter IV, then you’ll appreciate the balance of information given while not overwhelming the screen.

If you have played any of the other Persona 4 games, then you know how catchy the music in those games is. Those same songs are used in Ultimax. Normally I would be disappointed by using recycled music in a game like this, but the songs are so good that hearing them sent me back to the fun time I had playing the Persona 4 RPG. If you haven’t heard these songs before, you are in for a real treat.

Persona 4 Arena Ultimax is a worthy successor with enough gameplay differences to justify a purchase for those who have the original. The mechanics make it easy for novices to jump in and play but offers enough depth to challenge experienced players to learn each character. If you thought Ultimax was interesting but had hesitation about a fighting game with RPG characters, don’t let those doubts cause you to miss out on one of the best fighting games available.