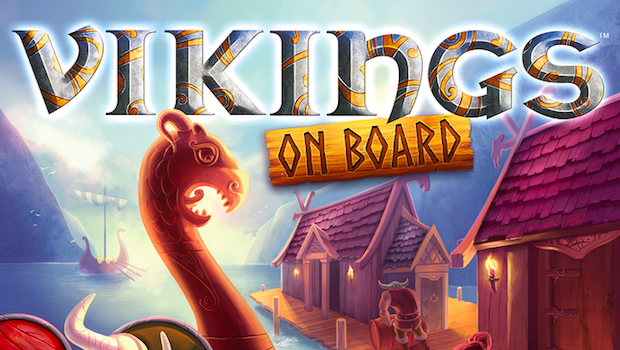 Viking lore conjures up images of bloodthirsty raids launched from serpent-headed ships. Rarely does it invoke visions of Norsemen loading those ships with goods for the journey. Ragnar hoisting some wheat into a boat is hardly the concept likely to get gamers’ juices flowing, but Blue Orange game is banking on this idea for their latest release, Vikings on Board.

Vikings on Board pits two to four players against each other to stock and launch Viking boards for their raids. The heart of the game has players moving colored boat sections around in an attempt to have their color be represented the most. Control of a boat allows first pick at any cargo aboard, which leads to victory points at the end of the game. It may sound like a light-hearted Euro game at first, but in true Viking spirit, the game has a nasty streak as long as a broadsword.

It’s impossible to jump into the gameplay without mentioning the fantastic components first. The boat sections come preassembled and look great on the mounted map of a Viking harbor. The Viking miniatures are all one mold but look terrific as well. Even the supply markers and large scoring shields are done in thick cardboard. I’ve never been disappointed in the quality of Blue Orange’s work, but this goes above and beyond.

From the pre-constructed ship sections to the beautiful board, Vikings on Board is a great looking game.

The objective is to gather as many victory points as you can before the seventh longship leaves the harbor village. One way to gather these points is by being the leader of longships as they jettison the docks. The game contains several sections of longship in colors of blue, red, green, and yellow with either one, two, or three shields attached to each side. Control of a ship goes to the player who has the most shields at launch. Control in itself has no victory points. Instead, goods that have been placed on the boats are collected when the boat sets sail. The leading player, or clan if you will, gets first pick of the goods. Whoever had second most control gets the second good and so on. Depending on the number of goods or the number of different clans involved in the expedition, players might have a chance to grab a second good.

The other way to gain victory points is to bet on which clan will lead an expedition. For example, if the blue player is currently in control of a ship before launch, another player may opt to bet that the blue player will still have control when the ship is ready to go. If so, that player will earn victory points based on the value of the bet token they used. With a limited number of colored ship sections available for each player, players will eventually be forced to resort to betting to gain victory points. I like that the mechanic is there for those that have seen their clan’s ship pieces sail away, but it feels very limited especially after the biggest bets have been placed.

When placing your workers, you decide between advancing your own agenda or hindering someone else’s.

Your ability to garner any points will come down to how you place your workers. There are several positions in the village in which to place your Viking. Some allow you to move pieces of longship around to give yourself control of a boat or take it away from someone else. One of those also moves a piece to the ship’s bow, giving you a tie breaker should your clan’s shields be tied at launch. Some allow you to place or move bets. Others allow you to take goods and stow them onto ships. The market ability raises the price of goods, which in turn raises their value as victory points. If you have iron goods, raising the iron value from one to two doubles your victory points. The last action is the stern action, which gives you the back of a ship. At the end of the turn, the player holding the stern decides which good laden ship is to set sail.

The placement of workers determines the following round’s order. Powerful actions like the stern and double move action will result in you playing at the end of the next round, while choosing to go first next turn option results in doing nothing with that worker on the current turn. You soon realize you can’t do everything you need to do in a turn, which forces you to think ahead to the next turn to accomplish your end game. You may not be able to block all the attacks on your position, but the game isn’t overly complex. It won’t take long to figure out how to minimize the damage inflicted against you.

With worker placement driving every action in the game, luck isn’t a big factor in the game. That works in the sense that planning and using what’s available to your best advantage is key to winning the game. Yet, shrewd players that gain leads at the game’s midway point may hold out for the victory since there’s little in the way of catchup options.

Vikings on Board is designed to be a family game. It certainly appeals to that demographic with its amazing components and easy to get into gameplay. What may not be appealing to a family is the game’s cutthroat nature. Since you can move your pieces as well as other’s pieces, there’s an incredible amount of spitefulness that can happen. Someone have a stern piece? Move their pieces away to another ship so they lose control. If yet another player had a bet on that boat, then you’ve managed to irritate two people at once. It doesn’t help that once you no longer have access to your pieces, dirty play seemingly becomes your best weapon to thwart others. While I personally have no issue with such tactics, the game was a tough sell to my family who hated seeing their hard work ruined on a cheap move.

All this really makes this game a bit of a conundrum. I generally like worker placement games with some teeth, but I have to wonder where this game fits in. It has the look and feel of a light hearted family game and lacks the depth to appeal to regular gamers for an extended length of time. Yet, those backstabbing maneuvers and lack of game balancing luck that will draw in the gaming crowd are hardly going to win your ten year old over. It almost falls into some sort of gaming no-man’s land. It’s certainly enjoyable enough to warrant the occasional play, but finding a group that it really clicks with may be harder than actually winning the game.

Vikings on Board is a gorgeous game that's easy to learn. The issue comes between the simplicity of the system and the nastiness of the game play. It may be too light for regular gamers but too vindictive for a younger audience. It's a decent game but the audience for it may be limited.

Nick grew up with games like Axis & Allies, Fortress America, Samurai Swords, and Statis Pro Football. After a life hiatus to work and start a family, he rediscovered his passion for gaming in 2012. Originally a war gamer, he now appreciate different genres and enjoys exploring great game systems.
Related Articles: Tabletop, Vikings on Board
Share
Tweet
Share
Submit