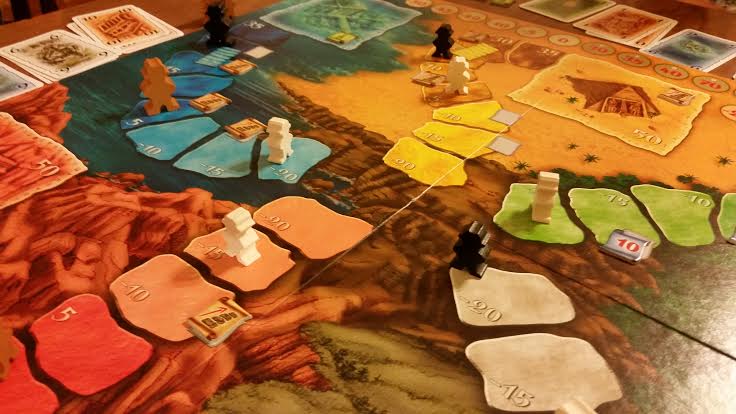 Growing up in the 80s for me meant two things: great movies and lots of conversations about them. The most debated ones were about which character you would be from Star Wars. Everyone wanted to be Darth Vader, and everyone had their thoughts on which unobtainable girl they wanted to be Leia. Yet, I always drew jeers when I said I’d much rather be Harrison Ford’s other iconic character: Indiana Jones. Perhaps it was the fact that he’s named after my home state, his sarcastic attitude, or his habit for making stuff up, but there was something really great about the swashbuckling professor.

It’s because of this that I jumped at the chance to review Lost Cities: The Board Game. That twelve year old inside of me was anxious for the chance to search for ruins and find hidden treasures. Heck, even the box had a silhouetted figure that looked a lot like Dr. Jones, right down to the fedora. This game simply had to be good.

Then I opened it and was immediately disappointed. The brightly colored board looked like a cross between Trivial Pursuit and Parcheesi. There was a deck of what appeared to be UNO cards. The four pages of rules seemed simplistic. And meeples? How could anyone have a serious adventure with Meeple Jones? I sighed, called my oldest children over, and practically begged them to play with me.

My begging was useless. They looked at the board and were eager to play. Suddenly they were pointing out the various locations on the board. There was Atlantis, The Pyramids, Angkor Wat, and even the stone church (Petra) from Indiana Jones and the Last Crusade. My kids were excited, and then I remembered. Indiana Jones never took things seriously. This game wasn’t either. It was meant to be fun.

It took no time reviewing the rules. The goal was to get our adventurers down five paths as far as we could before the round ended. One adventurer, known in the game as the researcher, is twice the size of the others which is fitting since it doubles the score of its ending position. Scores were tallied after each round, and whoever had the most after round three one. Simple? Yes. Easy? Not quite.

I dealt out the hand of eight cards and suddenly that simplicity melted away into brilliance. I was looking at a hand of cards. There were five colors, and cards are numbered zero to ten. Cards can only be used on their corresponding paths, so I could only reach Atlantis by using blue cards. In addition, I had to use the cards in numerical order. If I started a path with a three, then I could never use anything less than a three again. Using higher numbered cards early greatly reduce the chances of making it to the end of the path where the most points lie.

Scanning the board presented other options. Randomly placed events can gain immediate bonus points (victory point tiles), the ability to move any piece on extra space (arrow tiles), or treasures which can garner bonuses at the end of the game (artifact tiles). Now the possibility of building combo moves exists with the arrow tiles or a long term strategy with the artifacts. The rules have these tiles placed face up though I would like to see them hidden. If the theme is to explore hidden treasures, we shouldn’t know where the artifacts are before heading out.

Four pages of rules and there was always a myriad of possibilities as evidenced by the different strategies each player took. My daughter quickly threw all her adventurers on the board and was gobbling up artifacts and victory points. My son concentrated on one adventurer at a time, moving them far along before beginning another. I took a more moderate approach, working on two or three rows and trying to building combos from them. At the end of the round, my son had the lead thanks to having two adventurers in the final location. My daughter was having so much fun collecting artifacts that she forgot about moving the researcher to take advantage of its great double score ability. I was stymied by the cards, unable to make much headway after an early start.

Rounds two was played out in similar fashion. My son had his deliberate approach. My daughter was having fun with her helter-skelter playing style. I stubbornly keep trying to land my meeples in positions for combo moves only to see the cards I desperately needed land in other players’ hands.

Trailing badly, I finally started focusing on the other aspect of the game. A player is always in possession of eight cards. You play one. You draw one. However, as meeples progress, hands start to become filled with useless cards. These can be discarded into their color coordinated stacks. From there, another player is free to pass on the draw for the chance to take the top card from any colored discard pile. It’s yet another layer of strategy to remarkably deep game. I held on to a blue eight that was useless to me simply because my son’s blue stack was at seven, and I knew he’d want that card.

Round three became a tile grab, but as the game went on hands started filling with dead weight. As those cards were relegated to the discard pile, I cheerfully snatched them up and finally got some nice combos going. I ended up taking the final round and the game. That’s not to say my strategy is the only strategy. In fact, the final scores were all within 80 points of one another. If my daughter had remembered to move that researcher just a bit farther in the first round, she would have won. The hallmarks of a good game are balance and replayability. The scores indicate the balance is there, and the fact that both kids asked to play it again hints at replayability. Considering the possibilities in drawing a hand and random artifact locations, the game will be different each time it’s set up.

Sure, this game wasn’t like one of Indiana’s harrowing adventures. However, this game did share something with those old Indiana Jones movies. It left me feeling satisfied and entertained. Non-gamers and gamers alike will be drawn in by the colorful artwork and engaging theme, but even more seasoned gamers will find enough of a challenge here to bring this to the table. To paraphrase Henry Jones, I’m very glad I didn’t leave this game before it got interesting.

Lost Cities: The Board Game

Beyond the psychedelic board lies a game with solid value. Lost Cities balances the accessibility for new players while still providing a good challenge for the more experienced.

Nick grew up with games like Axis & Allies, Fortress America, Samurai Swords, and Statis Pro Football. After a life hiatus to work and start a family, he rediscovered his passion for gaming in 2012. Originally a war gamer, he now appreciate different genres and enjoys exploring great game systems.
Related Articles: Lost Cities: The Board Game, Tabletop
Share
Tweet
Share
Submit