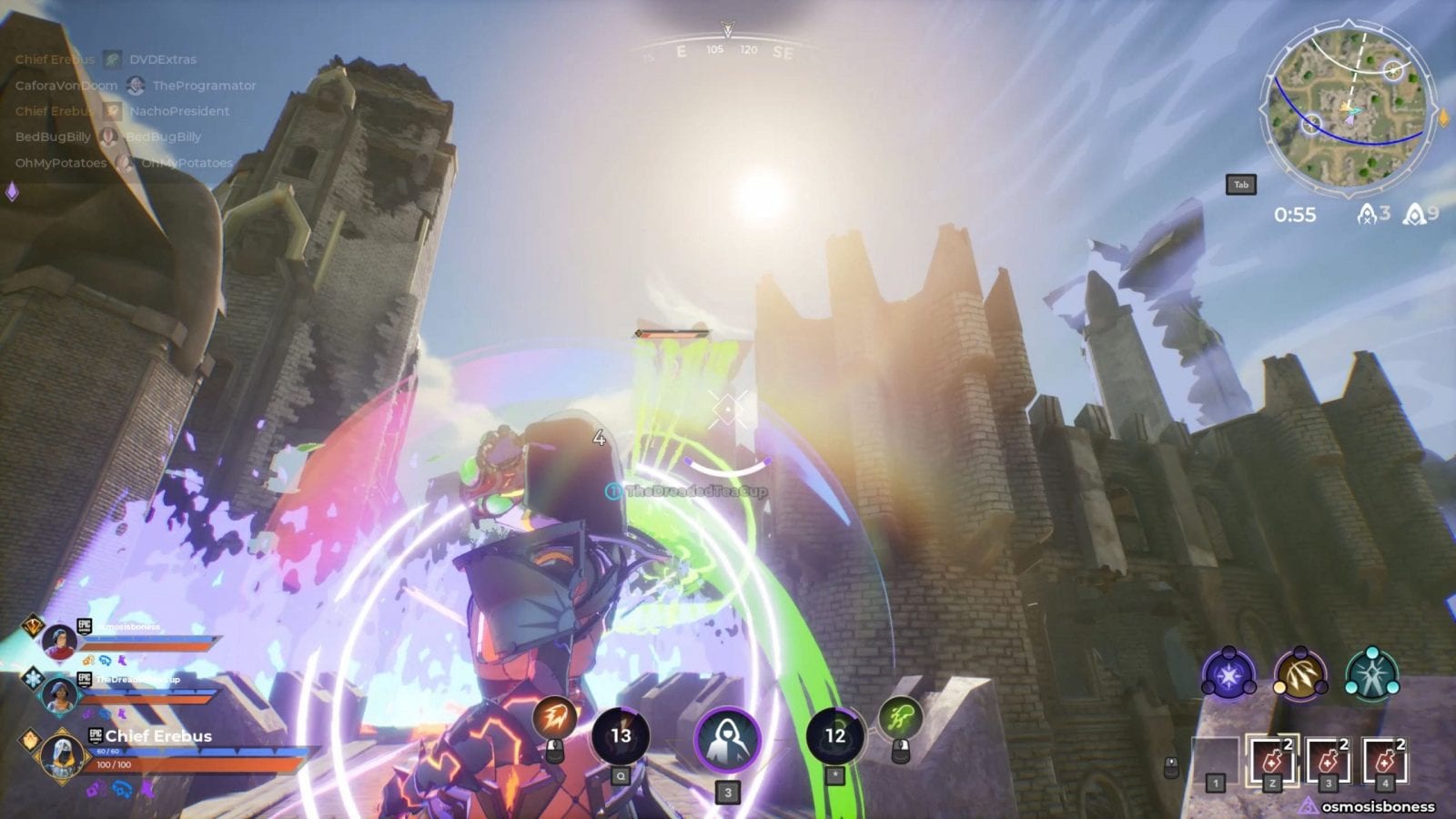 With a market so flooded, getting into a battle royale nowadays can be a challenging task in itself. There’s a large range to choose from such as Player Unknown’s Battlegrounds, Z1 Battle Royale, Call of Duty: Warzone; the list goes on. Each with different mechanics, graphical makeup, features, etc. When each title has dominated the market, it has done so for a large period of time, and we’re currently seeing that with Call of Duty: Warzone. Given all of that, is it possible Spellbreak, developed and published by Proletariat, to see the same level of fame as its predecessors in the genre?

Spellbreak is an interesting one — mechanically speaking. This is the first time players have been given the chance to play a spellcasting battle royale. Instead of using guns and grenades to eliminate your opponents, you’re given a series of elemental gauntlets (fire, ice, stone, wind, etc). Each gauntlet has a corresponding weakness to it to cancel its effects — think rock, paper, scissors — such as shooting a fireball at a cloud of poisonous gas and converting it to a small inferno. You’re not just limited to shooting fireballs or creating poisonous gas clouds, either. In Spellbreak, each gauntlet provides an additional ability. For example, the ice gauntlet allows you to shoot a bow and arrow made of ice, create a small snowstorm that slows and eventually freezes trapped players. Each element is covered well, with no gauntlet standing out and being overpowered, and each gauntlet has a unique set of spells at the player’s disposal. 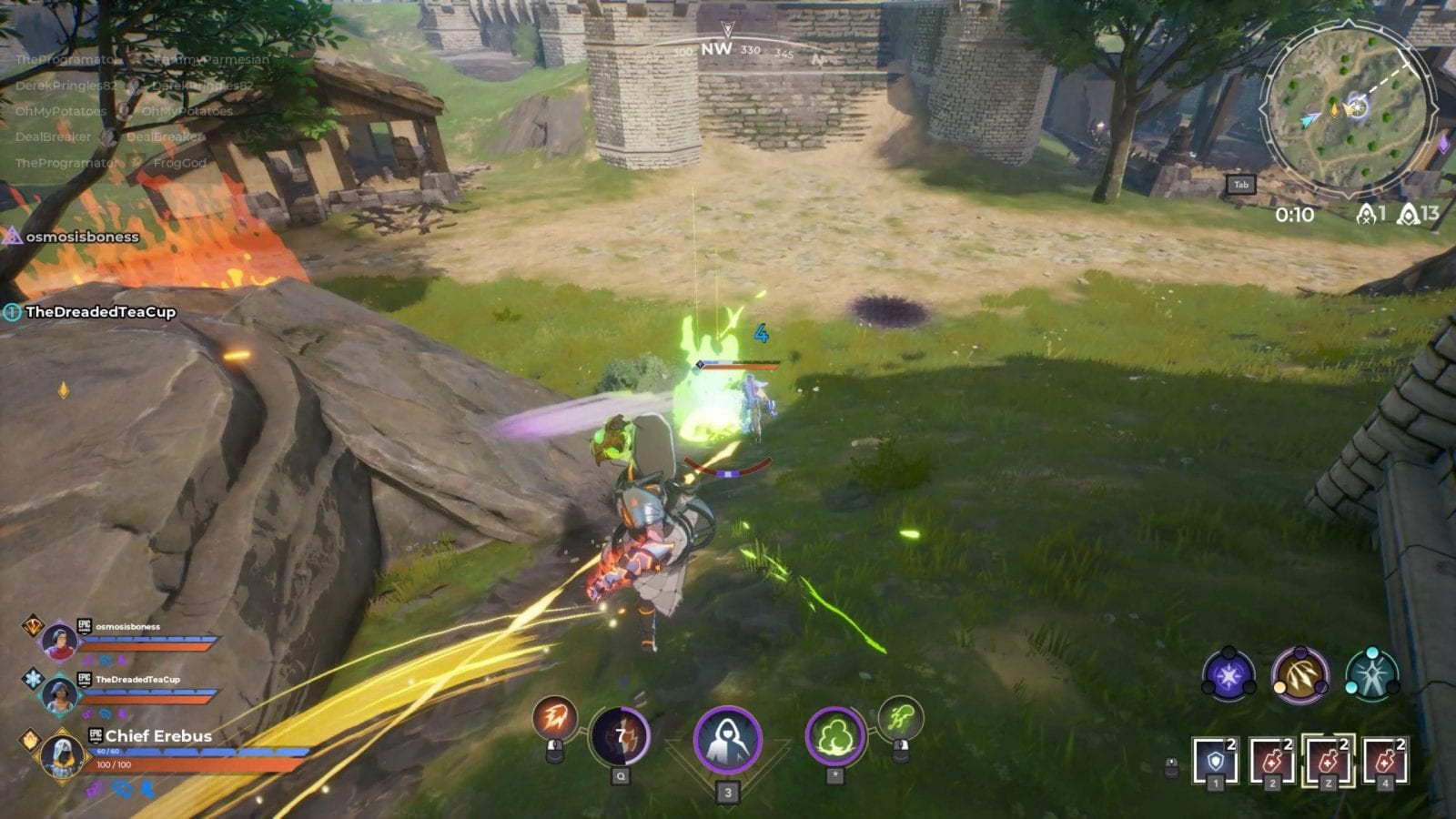 Is the Avatar-esque gameplay strong enough to compete with other heavy-hitting battle royales?

Alongside gauntlets, the player can pick up a rune and scroll. Runes act on a timer and provide players with non-damaging abilities such as being able to fly, teleport, or turn invisible. They’re highly effective in a fight and can save you in a pinch, so don’t skip them. The scroll provides improvements to the player’s Talents, but these are the hardest to find on the battlefield. Talents are placed in categories called Mind, Body, and Spirit. The Mind talent is cooldown and damage reduction focused, Body focuses on the offensive areas of spellcasting, and Spirit acts to improve the player’s wellbeing and keeps them alive longer in the fight. There’s a wide selection of talents to choose from per category and seems designed to suit all calibers of players. That being said, I can already notice a meta establishing in the selection of talents. If a player was to choose talents that focus on improving damage and spellcasting speed, they could easily dominate fights. Choosing talents like improving jump height by 25% or increasing run speed upon damage taken only act as a filler for the current pool available. 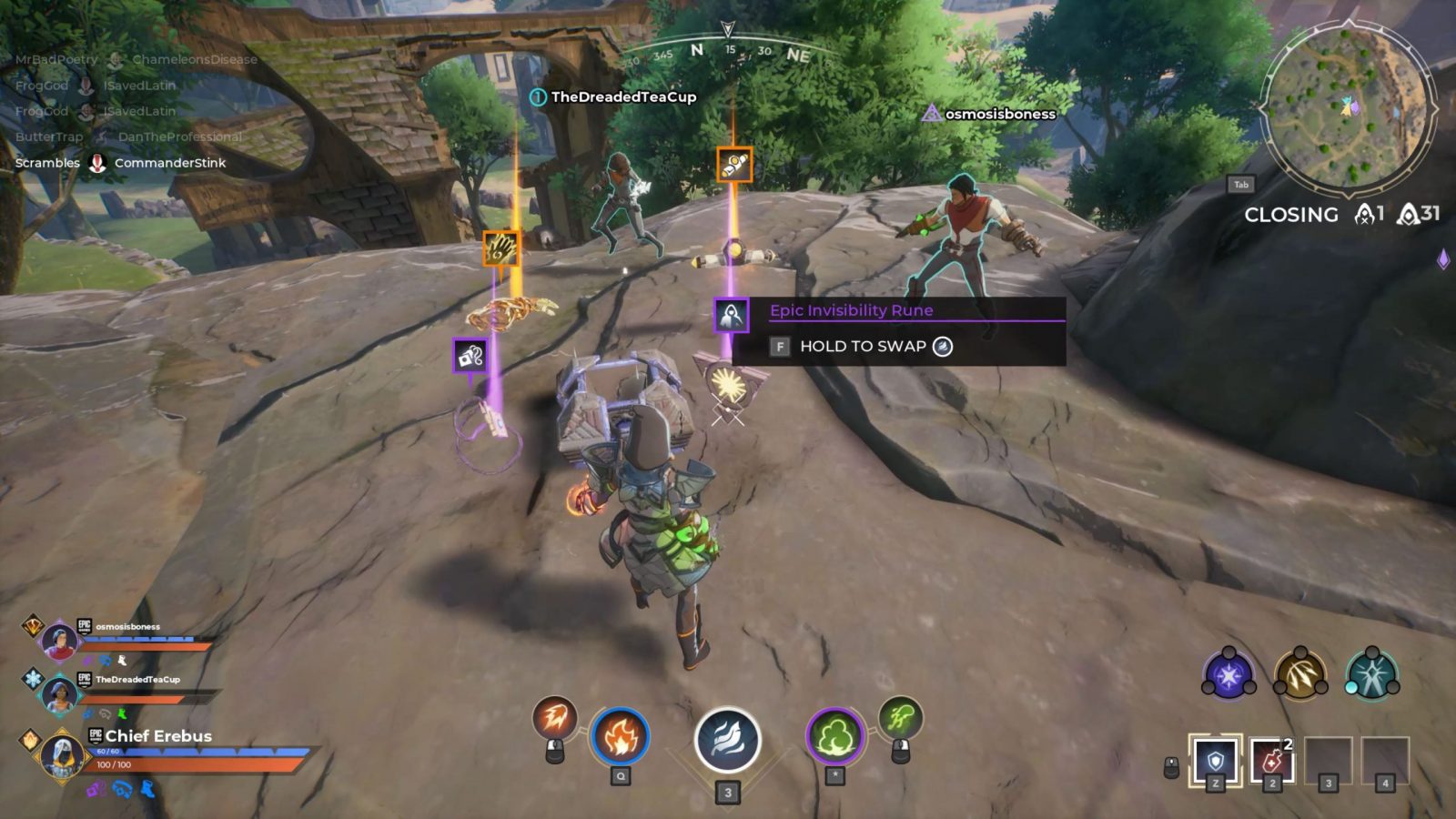 Do note; some of the basics of the battle royale genre are still present. Players can fight solo, duo, or squad up in threes, and take on a maximum of 42 spellcasters (or as they call them in this game — Breakers). It’s a smaller in-game player count than what battle royale fans are used to, but the small map makes up for it. A generic inventory system has been removed and is replaced by limiting players to collecting either health or armor potions. Sorry everyone, no hoarding scrolls or runes against your teammates and opponents. That being said, it’s a fantastic improvement to the genre; keeping players less focused on looting and more focused on the action.

As with every battle royale comes the microtransactions. Proletariat has done this part correctly and only allowed players to purchase cosmetics. If you don’t want to purchase cosmetics, you can always unlock them as you progress through the levels. Another big plus in regards to the microtransactions is the use of one form of currency. Games like Valorant like to tease the player and make them think they have a lot of in-game money, and they can put this forward to the best cosmetics available. Eventually, players notice that the average looking cosmetics are purchasable by their saved credits, but the best ones are locked behind a higher tier currency that can only be purchased with real-world money. In Spellbreak, that’s not the case, and players can always have access to the best cosmetics without having to break the real-world bank — given that they have the patience to save their credits. 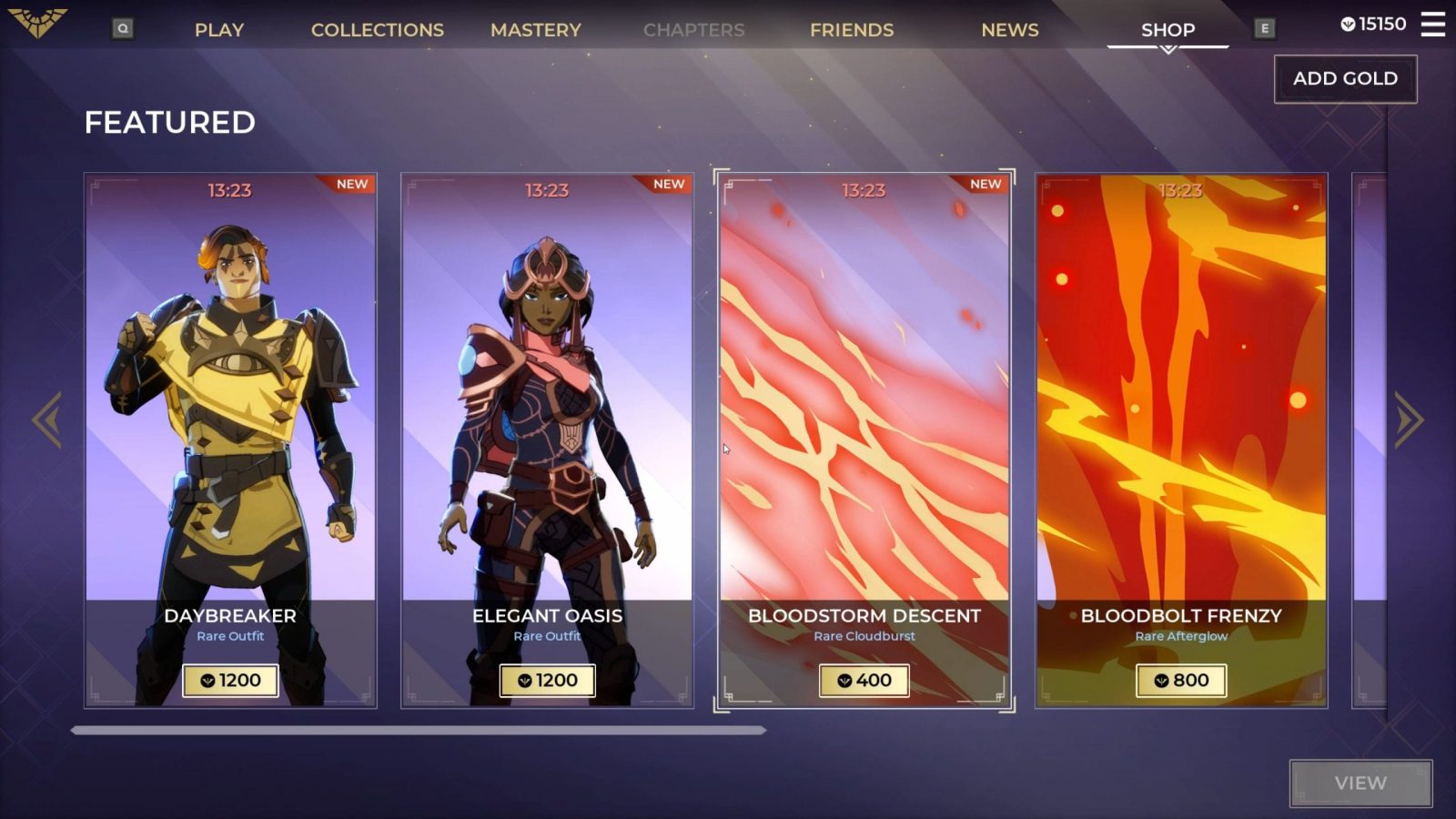 If you haven’t noticed already, Spellbreak uses a much different art style than what you’ve likely seen with other battle royal games. Instead of utilizing flashy photogrammetry like Call of Duty: Warzone, or going full potato graphics like Fortnite, Spellbreak sits in its own lane. Simply put, it’s like Valorant meets Borderlands; the graphic novel graphics mix wonderfully with the watercolor style. On a more technical level, that also means you shouldn’t have an issue running this on high graphics if you have a lower-tier PC. This game ran comfortably on ultra graphics, never skipping below 100 frames per second no matter how hectic the firefight was, and my PC is very middle range (stock GTX 1070, 16 GB of RAM, and a stock Intel Core i7-6700 CPU)

If it’s not the unique gameplay or art style that keeps you locked into the game, then it’s the sound design and soundtrack. The sound design is bass-heavy and beautiful, and has me completely immersed in the gameplay. The only other battle royale that did this well was Call of Duty: Warzone and that won Best Audio Design at The Game Awards last year. The soundtrack compliments this title just as well and gives me the sensation that I’m a deadly spellcaster in a magical world unknown. Just listen to the lobby music and it’ll send chills down your spine. 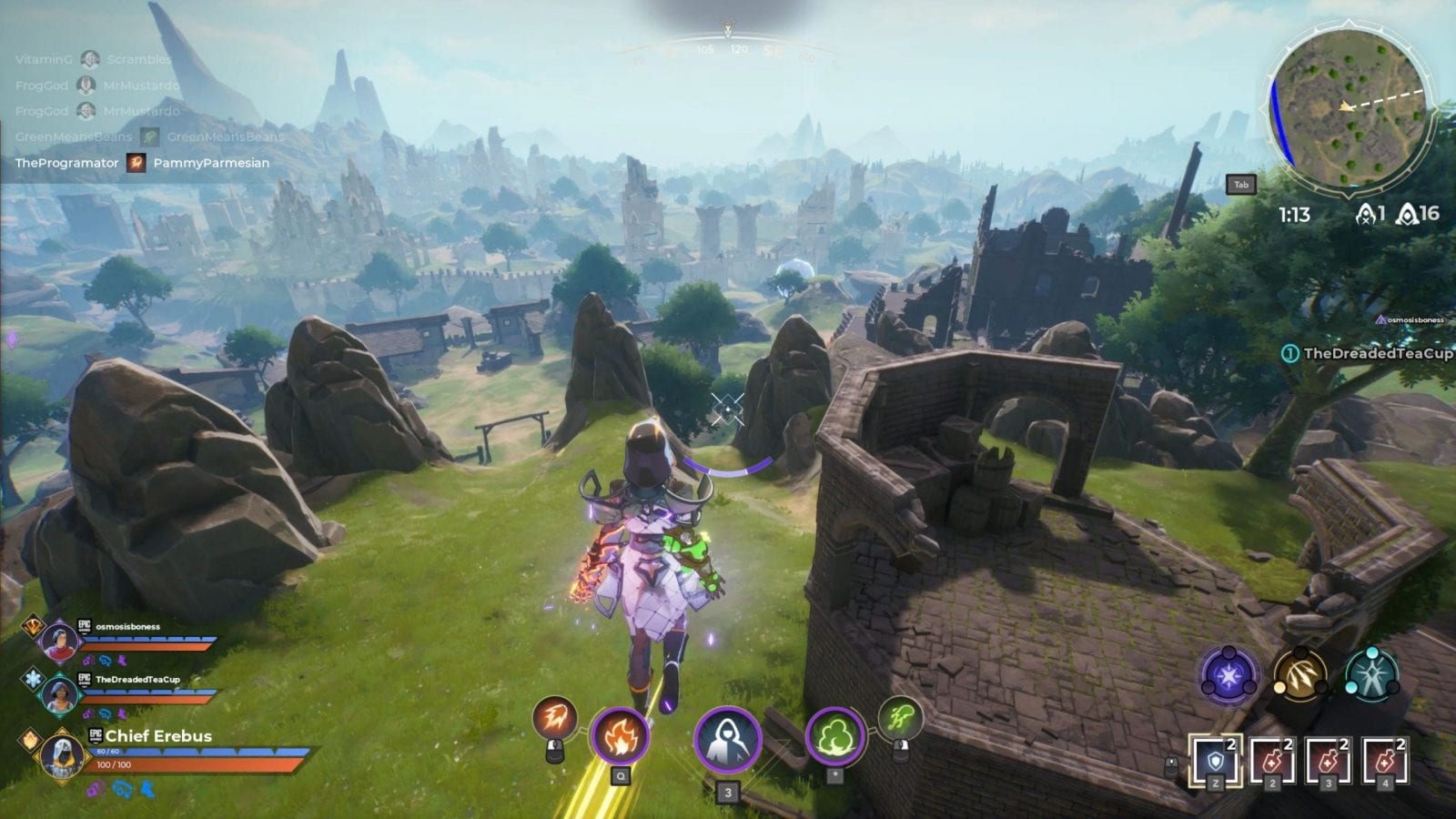 The game might be amazing, but the player base is desolate

Spellbreak has all the aspects to be great, but yet, it doesn’t have players. I’ve quickly noticed how imbalanced the bot-to-player ratio was. Look, I can say I’m a great player because shooters are essentially all I play, but I’m not great enough to win every single game that I played. But unfortunately, that’s the case; the game does a fantastic job of immersing the player, but quickly takes away the overwhelming feeling of accomplishment when you’re effectively playing target practice against bots. This comes down to Proletariat’s poor marketing campaign prior to its release. It’s a real shame too, because this game definitely deserves more players per lobby. Don’t get me wrong, it’s not like Proletariat thought this game would flunk whether or not it had effective marketing; there’s a setting in the options menu to turn on Streamer Mode to prevent stream sniping. Clearly, they thought the game would have a large enough player base that’d see the likes of streaming, and again, that’s definitely not the case.

I love Spellbreak, and without a doubt it’ll go down as one of my favorite battle royale games. The unique gameplay, sound design, music, and art style works in tandem to create a memorable and immersive experience for the player and keeps them interested for hours on end. The only issue that prevents Spellbreak from being a hit is the number of players you’ll encounter per game. So, expect most games to be full of bots.

Spellbreak could be a huge hit if it was capable of filling out games with players, rather than bots. Even still, Proletariat’s fantastic sound design, music, gameplay mechanics, and art style creates a hugely immersive experience for the player; comfortably satisfying a player’s desire to experience games shaped around elemental magic. It’s a shame that such an incredibly rewarding experience is marred by bot-heavy games.

With a deep interest in writing, Ben followed that into a Journalism degree. As an avid lover for gaming, he is constantly expanding his library with console, PC, and VR games. He's obsessed with stealth games and loves hunting down the smallest of details inserted by devs.
Related Articles: Spellbreak
Share
Tweet
Share
Submit