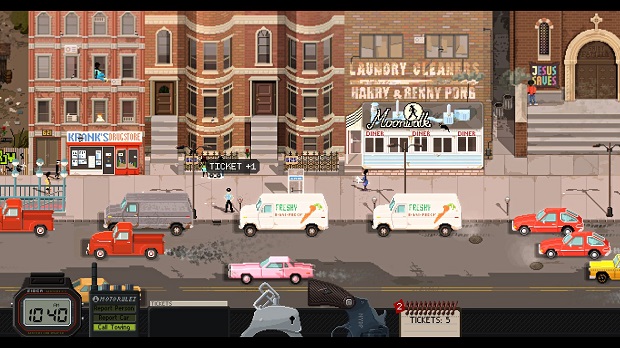 In the middle of a hot dog bite, detective Jack Kelly gets a call about a burglary at the senator’s house. Soon after entering he subdues the suspect, but when he ventures further inside, he sees that the senator’s safe is empty and the back window is wide open. The real perp has vanished. Because everyone believes Kelly swiped the senator’s missing diamonds, the police chief makes the tough call to transfer Kelly to another division. Jack Kelly is on a mission to clear his name, but for now he’s stuck being a beat cop for Precinct 69.

Beat Cop is set in Brooklyn, New York in the year 1986. This setting wasn’t chosen as a reference to any significant event, but rather as a tribute to 80s police TV shows that the creators enjoyed when they were younger. Each day starts in a meeting with your captain and fellow cops. You receive your daily assignments – ticket quotas, patrols, and so on – and have a chance to chat before you head out for the day.

A tutorial takes you through writing tickets, using your radio, and handcuffing criminals. However, it doesn’t elaborate on several mechanics until later in the game. For instance, the tutorial shows you that your notebook logs quests, but it doesn’t point to the other pages that provide helpful information about light and tire violations. The game tells you how to give someone a ticket, but it doesn’t explain that you can search cars until much later. Not to mention, it doesn’t logically justify why you have to take down criminals with violence instead of arresting them or reporting them to Central. These are just a few of the things that are overlooked in Beat Cop.

Every day is spent pushing to fulfill your quota, along with catching thieves and assisting residents when they need it. Your interactions with the locals include side quests ranging from buying an old woman donuts to recruiting a porn star for a new film. You also have the option of siding with one of the neighborhood gangs – the Crew or the Mafia. They’ll pay you handsomely in exchange for favors, and you may even become an honorary member if you complete enough tasks. At the end of each day, the actions you took are tallied up on three different meters. Did you lawfully apprehend criminals? Did one of your police orders get in the way of a Mafia operation, or did you take a bribe to do some work for the Crew on the side? Whatever you chose will be reflected in the meters and will have consequences for you down the line.

Throughout my time playing, I had a lot of trouble deciding whether I like Beat Cop or not. It just feels like it’s trying to be too much at once. I understand that this choice was intentional to show that the job of a cop is hectic and overwhelming, but there’s no way you can fulfill everyone’s requests during your shift. While I appreciate the sentiment, ultimately this game feels too fast-paced while also taking on too much to do any one part of it justice.

Take the story, for instance. The game constantly reminds you why you were removed from your detective role and are now working the beat, with characters saying “the diamonds are still missing” and “we know what you did,” even when you reiterate that you weren’t the one to steal them. With all this teasing about the truth, you’re only able to learn what happens if you can manage to fit in certain quests during the insane rush of your days and achieve a specific ending. Granted, it’s admirable that Beat Cop has multiple endings. You can tell its narrative is layered through the sheer number of choices you’re given, and its sense of humor can be seen in several of your missions, but taking the time for numerous playthroughs to see all possible endings sounds more frustrating than fun given the stressful nature of the game’s systems.

There are lot of things, big and small, that simply go unexplained. Periodically you’re asked to shell out hundreds of dollars to pay alimony to an ex-partner. Who is this person and what happened to dissolve your relationship? Not a clue! The lives of your fellow cops are fleshed out more through throwaway lines than that of your former significant other! The story feels under-developed and dialogue flies by so fast I feel like I can’t absorb it all. Not to mention, conversations take precious time away from your police duties.

Much of the time it feels impossible to complete all of your assignments on the beat. As an example, once I caught a radio thief pretty promptly, but a minute or two after I cuffed him the police chief told me there was a thief in the area. Even though I’d already turned him in, it somehow wasn’t counted toward my daily tasks and my pay got docked. Sometimes I’ll get an alert on my radio and immediately lose police points, or I’m told to stop graffiti artists that aren’t actually there when I show up. Lots of side quests don’t offer enough guidance, and though they don’t affect the main narrative, you can still end up getting a “Game Over” if you fail them. The difficulty noticeably ramps up as you near the conclusion, and there were a couple of days I had to restart over and over in order to get everything the game wanted me to just right.

There’s more of a sense of obligation surrounding quests for the residents of your precinct, making it difficult to fit in missions for either of the gangs, especially if you’re going the “good cop” route. I had no idea that visiting the local priest could help my favor with the Crew or the Mafia in exchange for a little coin; I figured it out by accident, but by that time it was already too late. If you reach -100 on the meter of a gang, it’s possible for them to take you away and (presumably) kill you. This instantly makes a section of the street off-limits because you can’t cross paths with them without starting that dialogue and triggering a “Game Over.” This unfortunate truth makes it impossible to complete the game. Though Beat Cop looks like a game of choices on the surface, in some ways it forces you to balance everything somehow or risk being cut-off from story elements.

I really wanted to like this game. The soundtrack and art style made for a great aesthetic, and in the beginning I was very hopeful. After spending time with it, I was disappointed to find that the main story was barely developed and the side quests were amusing but largely irrelevant. Reaching 100+ on your police meter starts a conversation about a promotion but never actually gives you a raise in pay, while -100 with a gang prevents you from reaching the end. That doesn’t seem fair. I had a handful of chuckles and a few frenzied hours with Beat Cop, but I’d rather not pick it up again.

Beat Cop is meant to be a tribute to cop shows from the 1980s, complete with snarky dialogue and questionable characters. When it comes down to it, however, it’s a stressful sim that’s heavy on time management and largely unforgiving. There are multiple endings you could discover, but after several hours with the game it’s hard to muster the patience for even one.

Sarah Marchant is an office admin for a nerdy t-shirt company. She has a soft spot for indie games, a passion for story-driven titles, and a weakness for cooking games and anything with zombies.
Related Articles: Beat Cop
Share
Tweet
Share
Submit