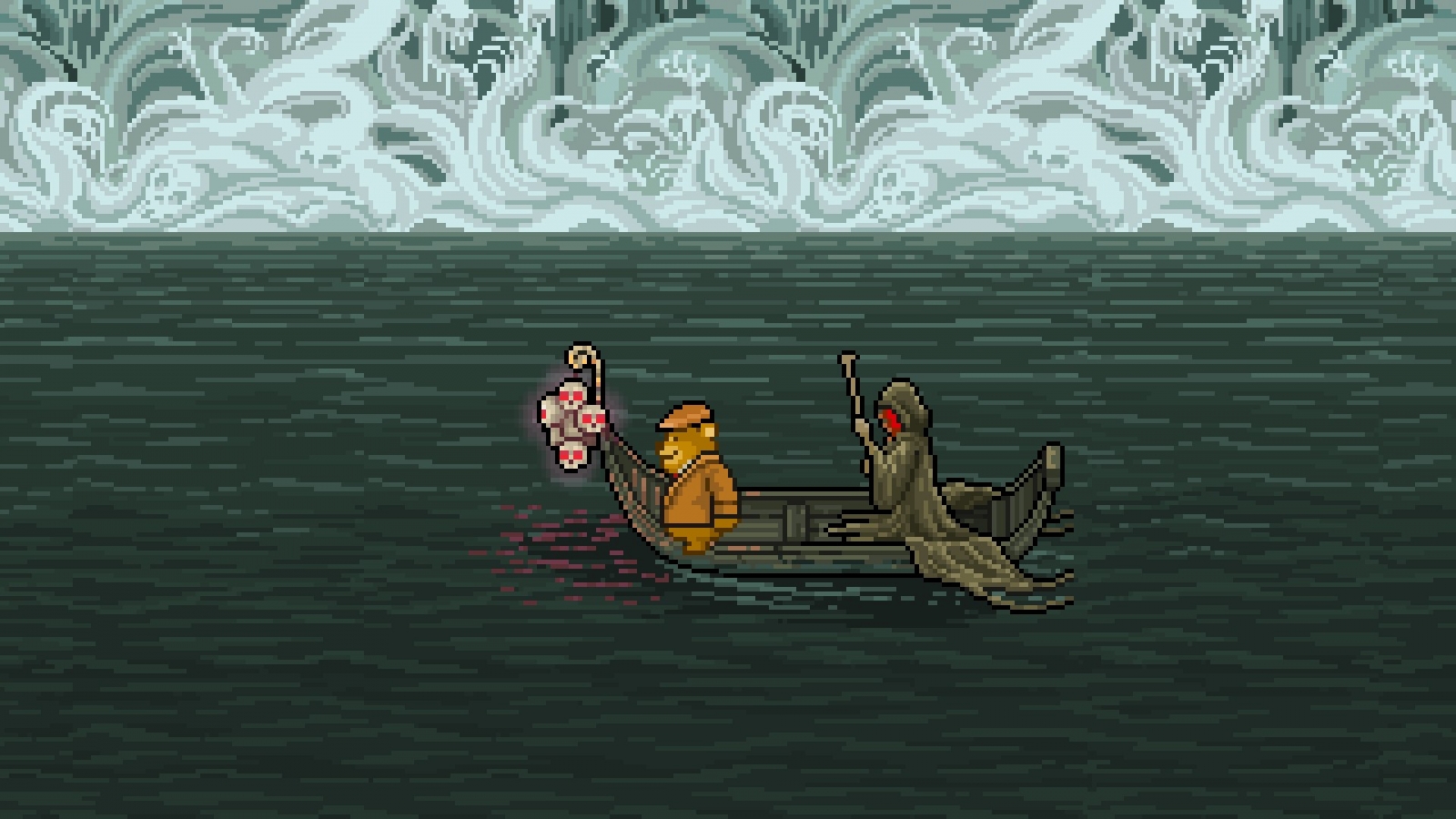 (Editor’s Note: Bear’s Restaurant has been completely re-translated after the publication of this review. The humor should land better now and the story overall should be more emotionally resonate with English speaking audiences. Please keep this in mind as you read.)

What would you eat for your last meal? It can be anything, even mom’s home cooking. The only stipulation is that it’s going to be prepared by a bear and your waitress is a cat. Bear’s Restaurant is at the intersection between life and death, where passengers waiting for the train to heaven or hell stop before moving on. As the aforementioned waitress, your job is to take people’s orders – even if they don’t know what they want.

Bear’s Restaurant is a short narrative game, clocking in at about 2 and a half hours to finish the main story and dip a bit into the post-game content. While it tells a compelling, dark story despite its cutesy pixel art, its poor translation takes a lot of the punch out of it. The game also has several design issues that make it difficult to recommend.

The game is divided into two halves: one where you play as the cat, and another where you play as the bear. Playing as the cat sees you taking customers’ orders, relaying them to Bear, and occasionally diving into a customer’s memories to get more information on the recipe. Once a dish is cooked, you take it over to the patron, they disappear, and you move on to the next one. There’s basically no traditional gameplay, so all you do is move your character to the correct object and press the A button. Occasionally you can speak with people and ask questions, which is the entirety of Bear’s gameplay, but that’s everything – this game is focused entirely on its narrative.

While that narrative does have some very sweet moments and twists, it can feel a bit too predictable. I won’t spoil anything here, because that would defeat the point of the game, but it’s easy to see where the game is going as soon as a certain element is introduced. I mentioned the translation issues before, with a lot of typos as well as grammatical and punctuation errors, but the way the text appears on screen feels far from ideal. Almost all dialogue appears smack dab in the center of the screen, where it can often be difficult to see or tell who’s speaking. There are text boxes in certain flashbacks, and Bear’s Restaurant would have been far better off using those for all dialogue. 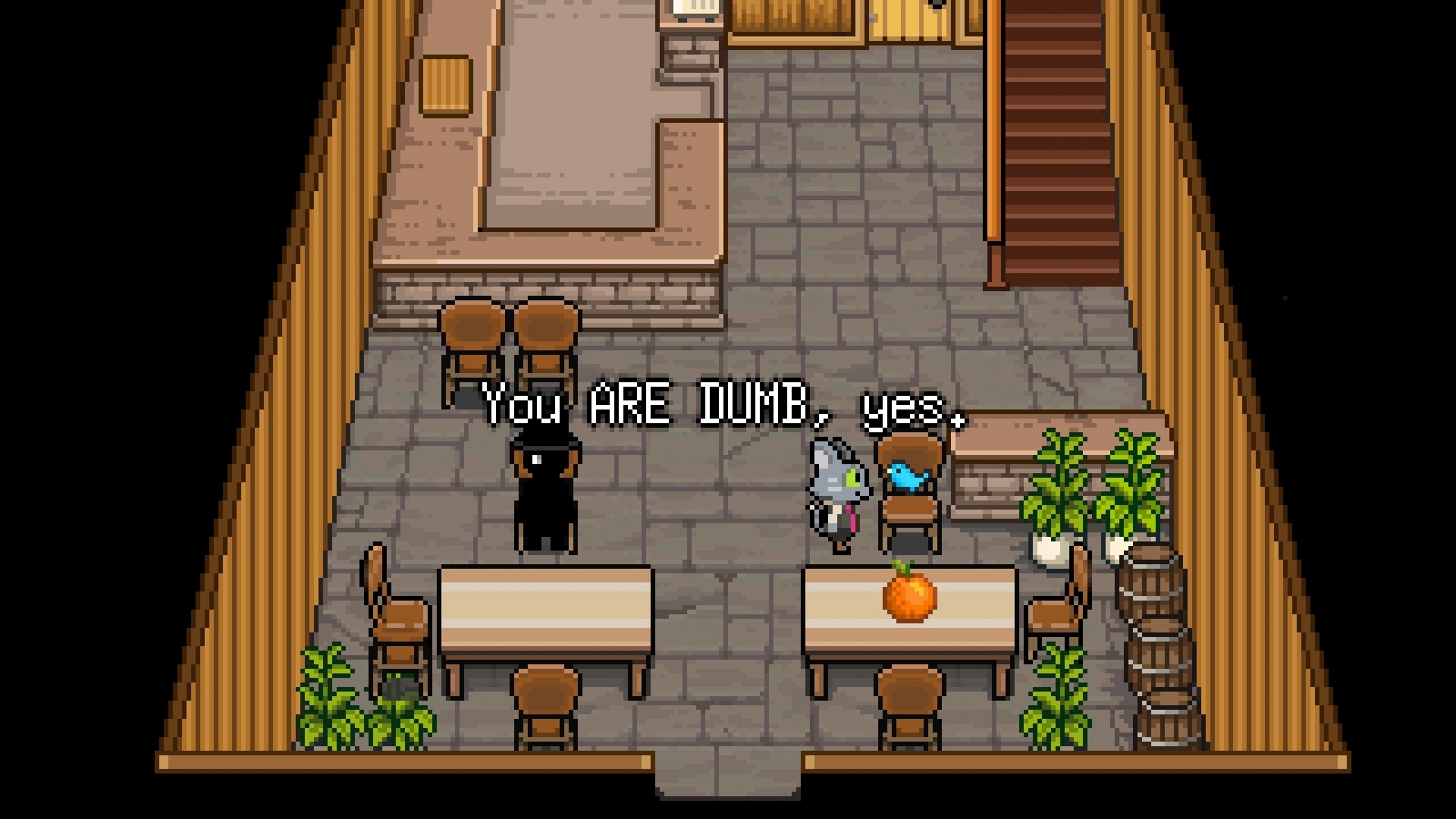 Speaking of flashbacks, every customer leaves a memory shard behind which you can dive into at the end of each day to see how they died. I don’t feel this serves any narrative purpose other than introducing the darker elements early. These scenes can be pretty graphic and honestly disturbing, so I stopped viewing them after the second batch.

The overall dark tone contrasts with the bright and cute pixel art, which does look very nice. There are some nice animations like when cooking, as well as some creepy and disturbing stuff introduced around halfway through. However, in general, I found the backgrounds to be pretty bland much like the music which is fairly generic. Bear’s Restaurant could have really shined through its writing, but the poor translation fails to hold the experience together.

Bear’s Restaurant appears cute on the surface, but tries to tell a dark yet heartwarming story. Unfortunately, inconsistent presentation and a bad translation fail to capture what they were going for.

David is the kind of person to wear his heart on his sleeve. He can find positives in anything, like this is a person who loved Star Fox Zero to death. You’ll see him playing all kinds of games: AAAs, Indies, game jam games, games of all genres, and writing about them! Here. On this website. When not writing or playing games, you can find David making music, games, or enjoying a good book. David’s favorite games include NieR: Automata, Mother 3, and Gravity Rush.
Related Articles: Bear's Restaurant, Indies
Share
Tweet
Share
Submit