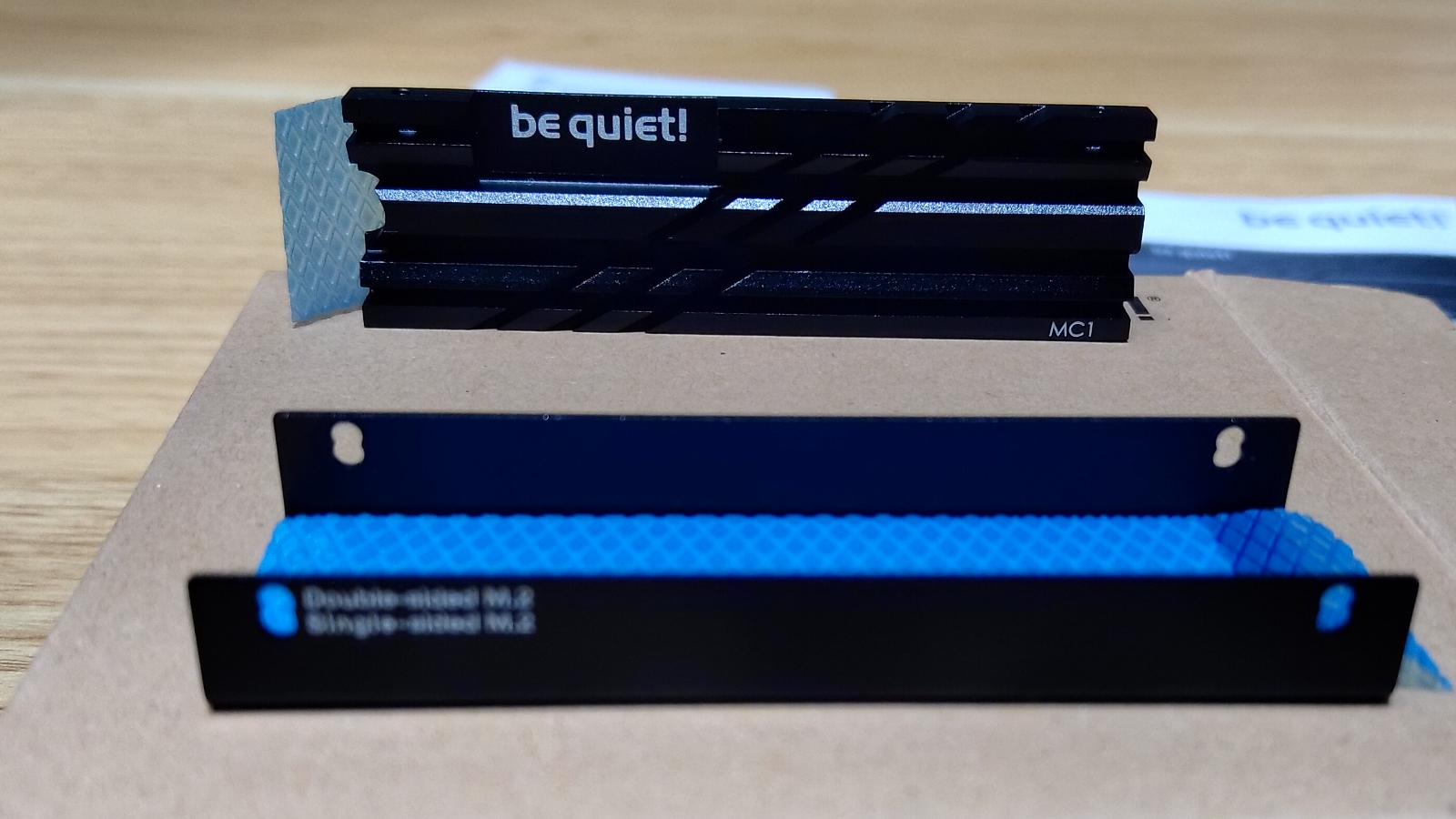 When Sony released the update to enable the PlayStation 5 to utilize M.2 SSD drives, there were only a handful of drives to choose from, and many didn’t ship with any sort of cooling. I managed to get my hands on a FireCuda 530, but without a heatsink it’d be a recipe for disaster. I scored a cheap one from a brand I’d never heard of, strapped it on, and got to work. That company has since completely disappeared (seriously, their webpage is even gone!) so I started looking for a cooler from a company I believed in. Well, be quiet! has shipped their own M.2 cooler specifically built to fit inside the expansion slot of Sony’s console. Let’s get that generic cooler off our chip, re-test our temperatures, and see where things land.

First and foremost, one of Sony’s requirements for loading an external drive is that you use a cooler on your M.2. Now, the Sony Police aren’t gonna show up and put you in PlayStation Jail, but you can expect temperatures in excess of 140 degrees Fahrenheit without one. The generic cooler I put on managed to lower that down to 99 degrees, so I was eager to see what be quiet!’s device would do. 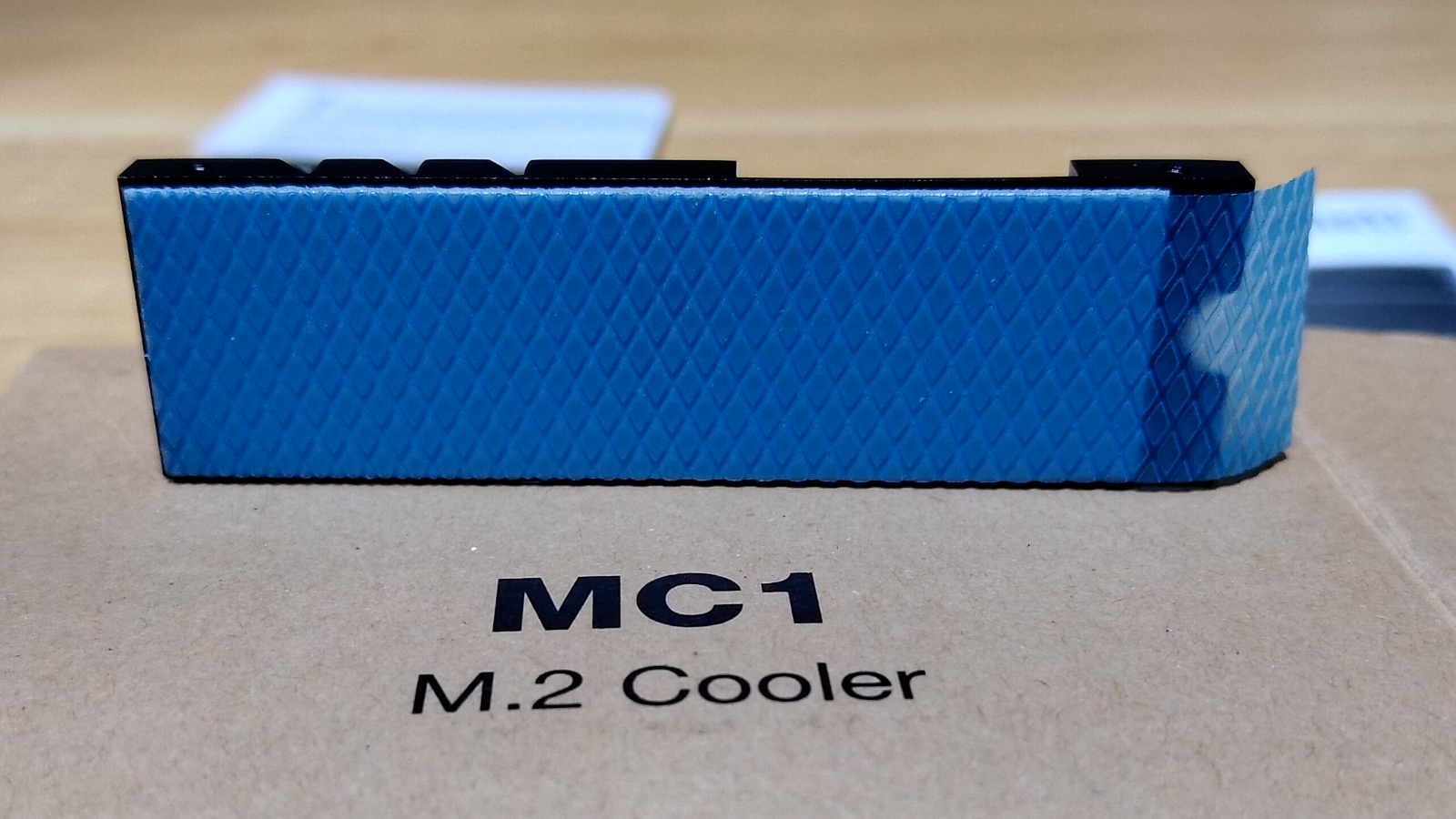 Second, I fully and completely acknowledge that I simply lack the equipment to adequately test the efficacy of a cooler as I don’t have a deep-penetrating thermal camera or the ability to test underneath the cooler. Instead, all I can do is test the external temperature of the cooler. Still, I’ll do my level best to test in the small seam between the device and the cooler, and also at the top and edge of the cooler’s body.

If you aren’t the type to build your own PC, you’d be excused if you hadn’t heard of be quiet! before. A premium PC component manufacturer, they are very well known in the self-build community as having some of the best case fans in the industry. They also make excellent power supplies, water coolers, air coolers for processors, and amazingly modular cases (this one being my favorite) — all with the aim of balancing maximum performance and cooling while remaining, well…quiet, of course.

The MC1 M.2 SSD cooler is, from what I can see, a slimmer version of their Pro M.2 SSD cooler, allowing it to fit inside the PlayStation 5 with or without the plate in place. Featuring two cooling pads to ensure maximum heat dissipation on single-sided or double-sided M.2 2280 SSDs, this simple device should keep the drive from running hot, thus increasing the lifespan of your chosen storage. 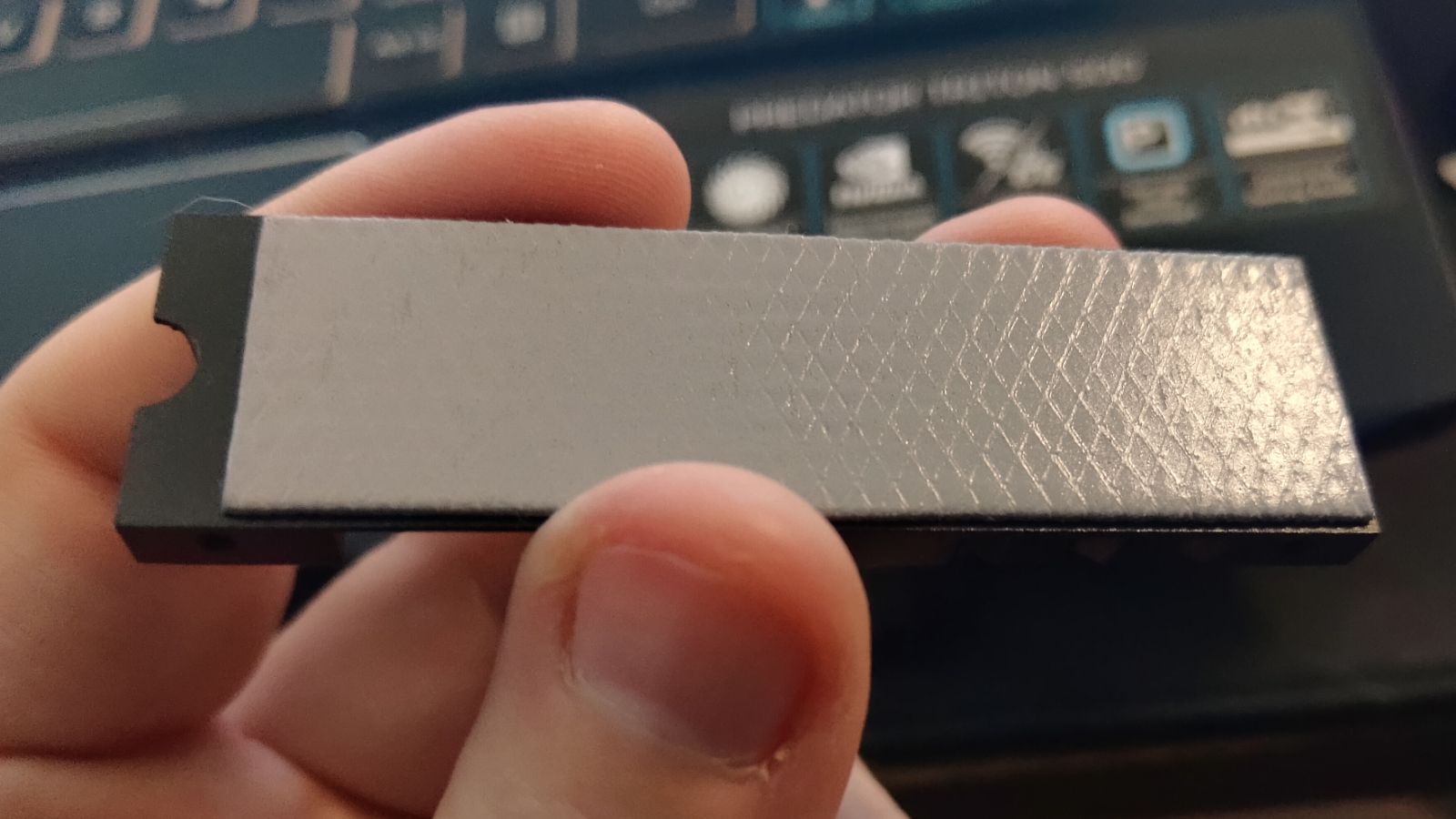 This pattern could help with adhesion, I suppose?

You’ll note that the pads from no-name company (seriously, it’s a collection of letters, like so many generic manufacturers on Amazon) has no texture to it, and sure enough there was a great deal of separation between the pad and the SSD. I don’t know if the additional crisscross pattern on the be quiet! pads will help with adhesion or thermal dissipation, but looking at the way the generic one bubbled and shifted, it can’t be much worse. 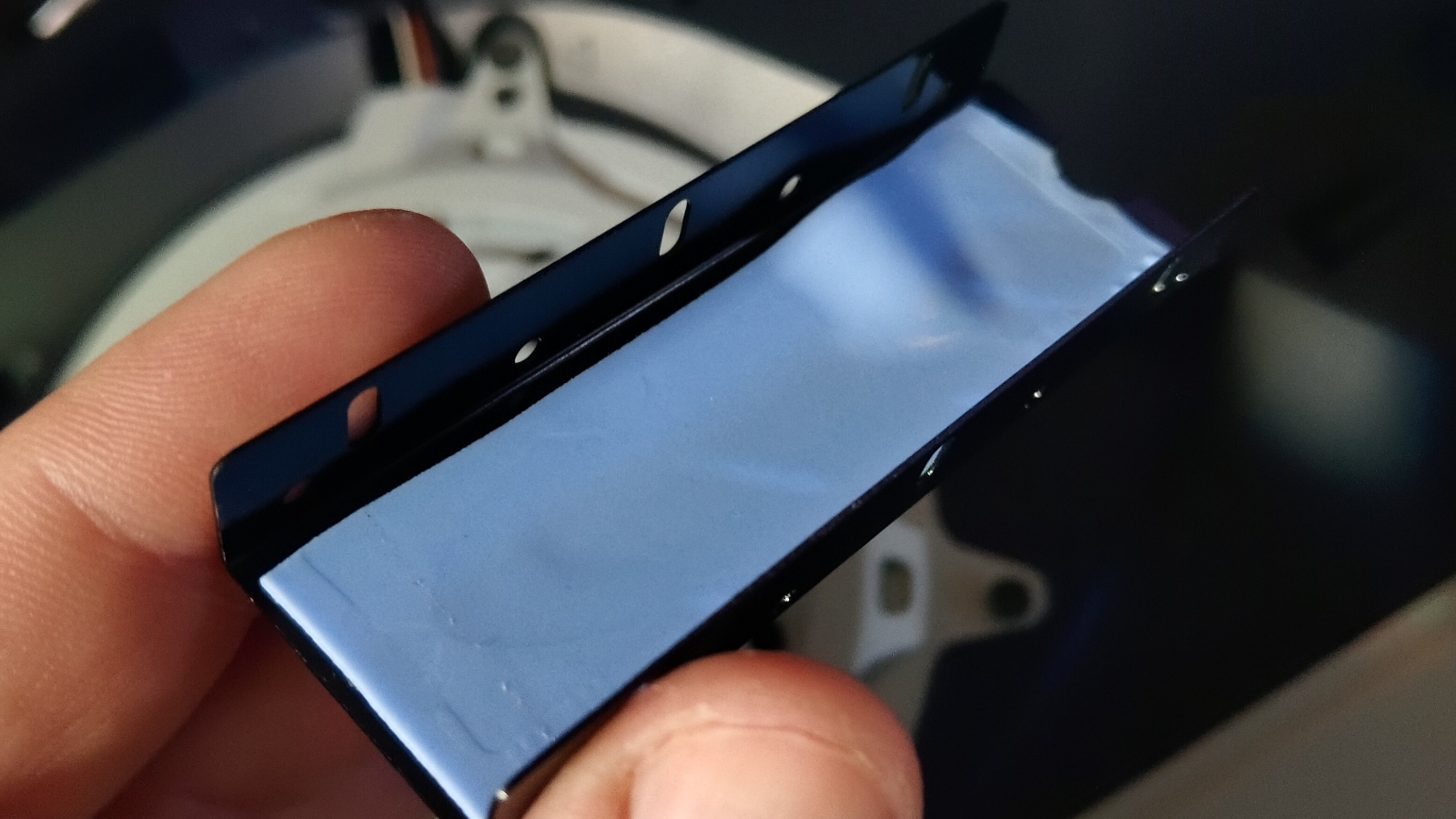 Generic pad is bubbling and separating

Passive cooling systems like these M.2 covers rely on the quality of the pad, but also the amount of thermal surface available to dissipate the heat. In the picture below you can see the deep grooves on the be quiet! cooler, especially when compared to the generic cooler. There are extensive whitepapers devoted to the thickness of fins, how thermal conductivity is impacted when you put a notch in a fin (as we see on this cooler) and the conductivity of different materials. I’ll spare you that and we’ll simply take a look at the numbers. 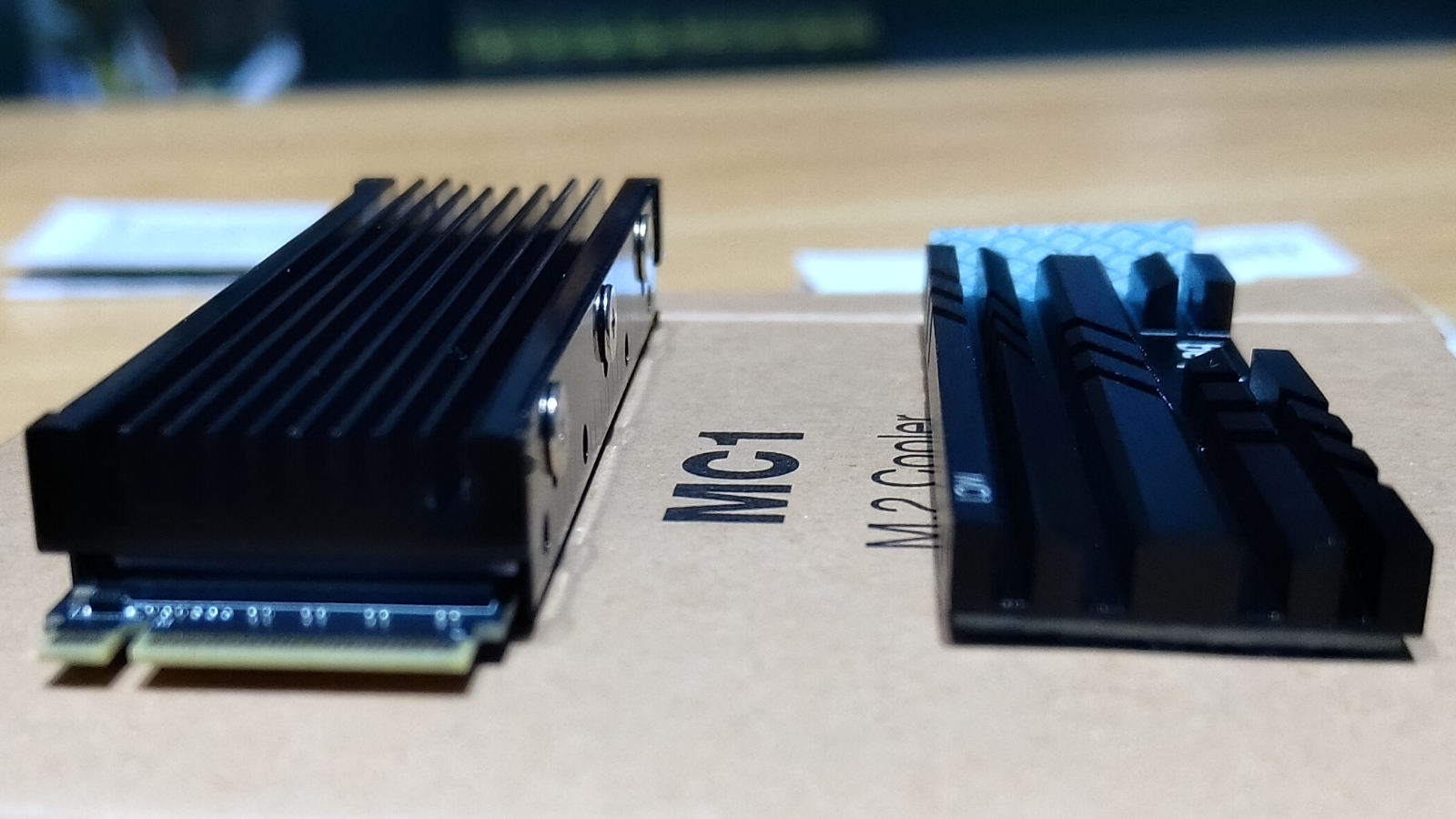 Thin generic on the left, thicker be quiet! on the right.

Assembling the drive cooler is as simple as installing it. Four small screws (which are adhered to a small piece of tape to ensure they don’t scatter all over the place — thank you to the packaging team!) are locked into place using an included micro-screwdriver. Simply align the half-circle that indicates the drive mount screw well with the same on the cooler and you are sure to be in the right spot — it couldn’t be simpler.

With the drive in place, I replicated the same conditions I had tested my generic cooler with — a long play of games like Returnal and Marvel’s Spider-Man as they both stream textures constantly and work the system fairly hard. 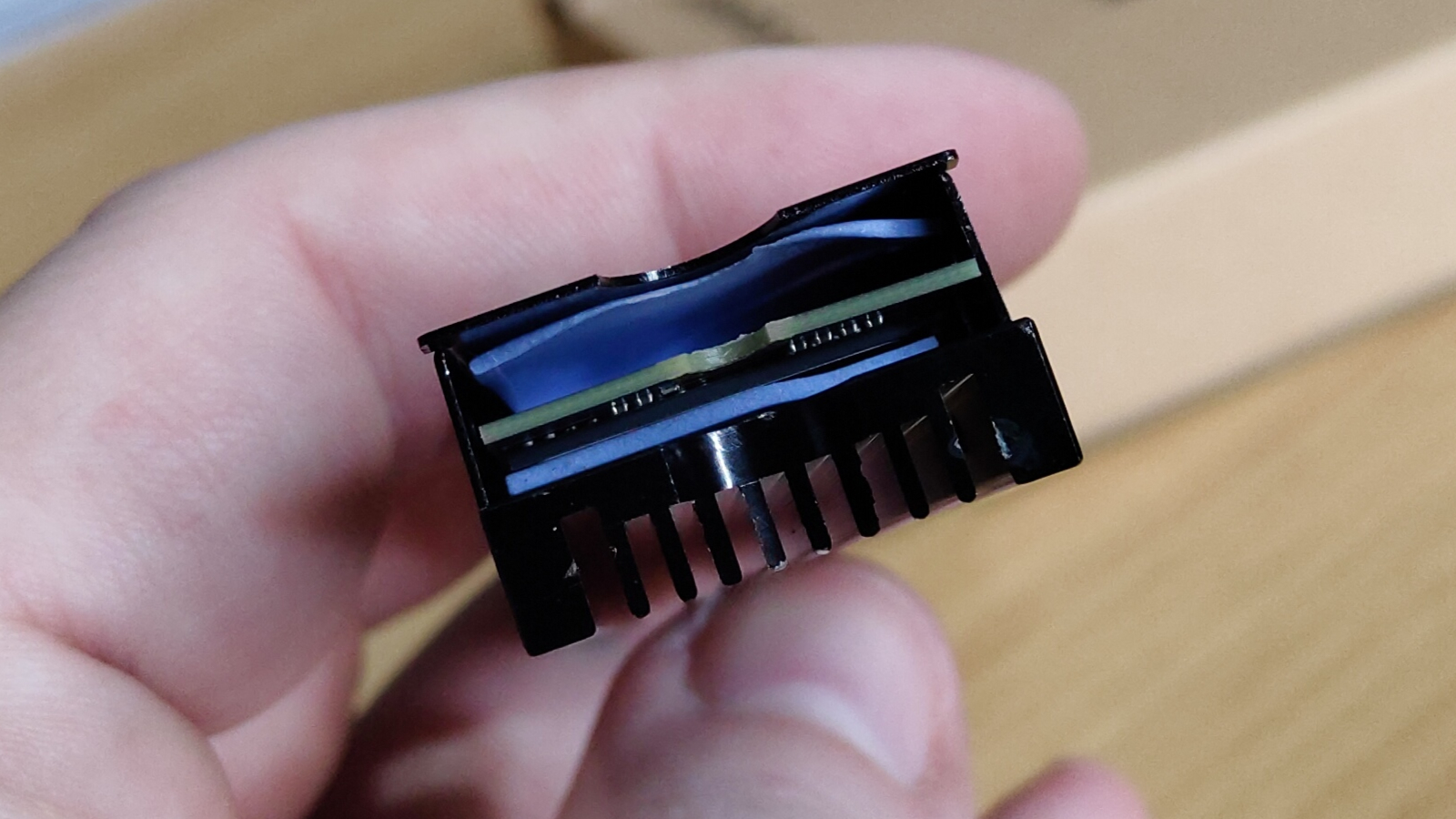 As I mentioned before, without the external plate and absent a cooler, your drive will run in excess of 140 degrees Fahrenheit, with heavier loads pushing it towards the maximum limits of the drive — hardly safe. The generic cooler pushed that down to around 99 degrees while idle at the time I installed it. Never one to miss an opportunity to play with my heat gun, I re-tested the cooler before removing it and found the drive hovering at around 120 degrees Fahrenheit while idle, and around 129 during load. The pad bubble I showed above had a significant effect on my thermals — a dire warning against simply choosing the cheapest cooler you can find. Using the be quiet! MC1 cooler I performed the same test and was happy to see that same temperature — 99 degrees. I’ve now used the device for over a month and just prior to the publishing of this video I retested to see if I’d face the same thermal separation problem. Nope. 99 degrees, right on the nose. While I don’t have a way to check the internal temperature like I can on the PC, it’s very clear that this cooler is the one to buy.

While the chip shortage has made it difficult to get your hands on an M.2 SSD, driving the prices through the roof, at least the choice in cooler is easy — the be quiet! MC1 SSD Cooler will set you back just $12.90 on NewEgg — if they are in stock. Funny enough, the one from alphabet-soup-generic company was nearly double that price. Spare yourself a problem later — go with proven German engineering and pick up the MC1.

With higher quality pads and thicker fins to dissipate heat, the MC1 from be quiet! delivers on its promise. It’ll keep your chips cool, fit snugly in the PlayStation 5 with the protective plate in place, and protect your critical storage for years to come, all with a price that cannot be beat.

Ron Burke is the Editor in Chief for Gaming Trend. Currently living in Fort Worth, Texas, Ron is an old-school gamer who enjoys CRPGs, action/adventure, platformers, music games, and has recently gotten into tabletop gaming. Ron is also a fourth degree black belt, with a Master's rank in Matsumura Seito Shōrin-ryū, Moo Duk Kwan Tang Soo Do, Universal Tang Soo Do Alliance, and International Tang Soo Do Federation. He also holds ranks in several other styles in his search to be a well-rounded fighter. Ron has been married to Gaming Trend Editor, Laura Burke, for 21 years. They have three dogs - Pazuzu (Irish Terrier), Atë, and Calliope (both Australian Kelpie/Pit Bull mixes).
Related Articles: be quiet! MC1 M.2 cover, Hardware
Share
Tweet
Share
Submit