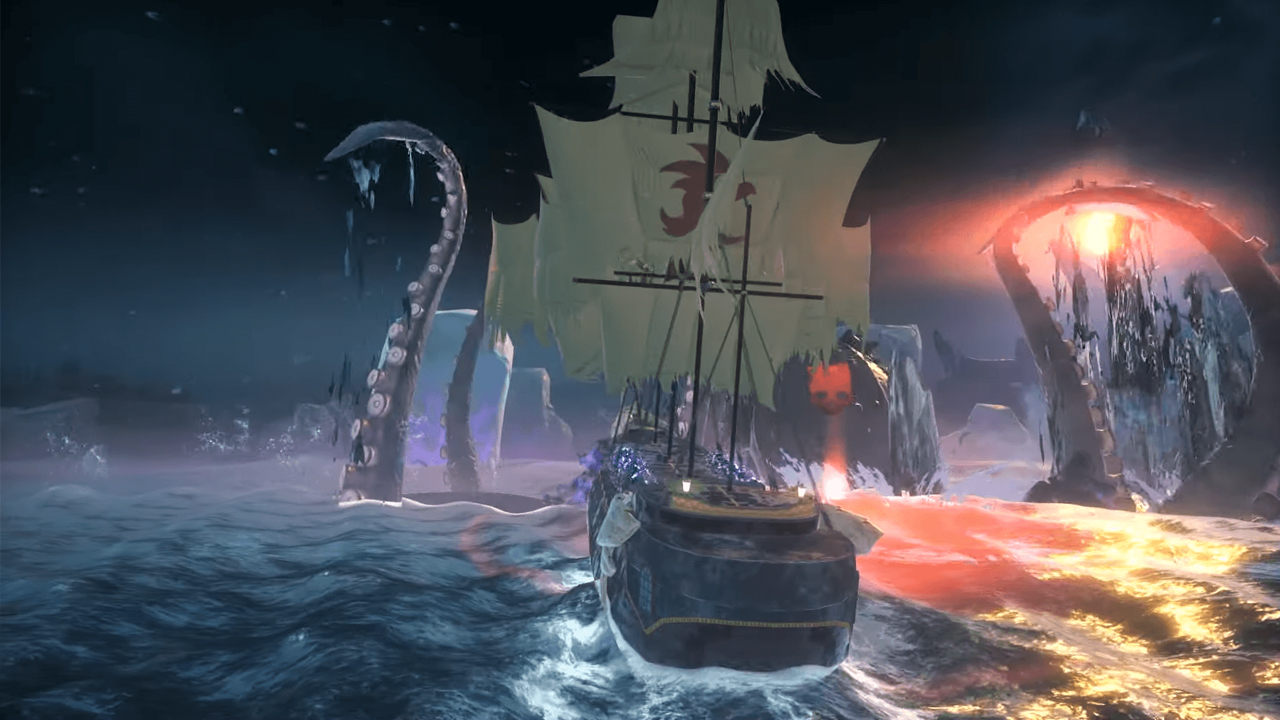 AHOY! It be time teh take a look at the virtual reality sea farin’ adventure game they be callin’ Battlewake. Sure, we missed talk like a pirate day, but that won’t stop me from doin’ it right now! Yarrrrrr!

Ok, enough of that nonsense. Battlewake, the newest title from VR veterans Servios wades back into multiplayer territory offering up a fresh set of characters, some fun mechanics, and bright and beautiful graphics. With a single player experience, cooperative play, and player vs. player modes, could this be their latest hit?

The setup for Battlewake is simple enough — four “Pirate Lords” are all squaring off in a race to find the mythical kingdom of Shambala. In terms of a story-based single player campaign, there are a total of 20 missions divided evenly amongst the four Pirate Lords as each of them wax poetic about how they are the chosen one to uncover Shambala’s treasures. Diego the Dreaded is a smart-mouthed Spaniard with heavy-damage cannons and puckle guns on his ship, and a special power that calls a large whirlwind to unleash on his enemies. Rey the Restless (my personal favorite) has smaller sniping cannons on her ship, but I prefer instead to summon massive tentacles from the deep to smash enemy ships into splinters, with the full power of the Kraken at her fingertips to destroy her foes. Calavera the Undying (Yep, he’s a skeleton) can periodically reinforce his ship with large ramming spikes, use cannons, or summon a large swath of sharp spikes underneath the belly of his foes to persuade them to die. The final Pirate Lord, Zhang the Magnificent, can unleash cannonfire, fire a continuous spray of scattershot from her bow, as well as call a massive tsunami to unleash in all directions. Each Pirate Lord has their own strengths and weaknesses and ultimately feel balanced, especially against the far-more-fragile AI.

In terms of gameplay mechanics, Battlewake finds a nice balance of the slow-wheeling motion of sailing and the cartoony naval combat the worldbuilding suggests. You’ll spin the helm with either your left or right hand (or both), but on either side lies a grip you can use to temporarily drop an anchor to, in essence, drift your ship. As a crew captain, you aren’t lighting the wick yourself, so your job is to simply stand at the helm and point at the ship you’d like to destroy. Pointing forward you’ll unleash the fore puckle guns, and pointing to the side generally fires the broadside cannons. As you try out other ships you’ll also be able to unleash great gouts of flame, mortars, and what can only be described as a slow-firing howitzer.

Graphically, Battlewake is a triumph. The colors are as bright as the bold character of the Pirate Lords, and the framerate remains rock solid regardless of how many ships you have on screen. The character models are incredibly detailed, as are the ship’s hulls, each one filled to the brim with details unique to their captains. The sails are individualized to their captain and shred as you deal or receive damage. The helms are bespoke, and Calavera’s skeleton crew takes on a more literal sense here.

Battlewake has a great deal of movement, including relentless (but very pretty!) water with a constant chop. You’d imagine that this might cause you some nausea, and to some degree you might be right. Survios uses a few tricks to help keep it at bay, including focus narrowing (where the game applies a light circle around the edges to combat motion sickness), as well as leaving the semi-stable frame of the ship highly visible as a reference point. Additionally, you’ll be gripping the wheel, giving you a literal anchor point (Ahoy! Here be more pirate puns!) to virtually hold onto. As a chronic nausea sufferer I was able to safely run 4-5 missions before needing to take a break. I didn’t feel the face-into-a-brick-wall nausea I encountered with Cyberpilot, but instead a general wobbliness and the need to take a half hour break. If you are a nausea sufferer, Battlewake will give you a little bit of discomfort, but it’s by no means unplayable.

I do have a few barnacles to scrape off the hull of Battlewake. The storyline is admittedly thin, scratching only the surface of the worldbuilding these Pirate Lords suggest. There’s little need for backstory when your game relies heavily on multiplayer combat for longevity, but I’d like to feel more of a connection to the protagonists, or at least some central motivation for why we are scrapping other than the potential for booty and revenge for some unseen slight. I’m not looking for James Clavell’s Shōgun here, but the forgettable and short storyline is an area where Battlewake is a little bit dead in the water. Completing it gives you a static screen with a “Thank you for playing” and a return to the title screen.

If there’s one issue that can sink the entire voyage it’s the multiplayer. It’s not that there’s anything wrong with Battlewake’s approach to PvP combat, it’s that there’s very little of it. The game launched on September 10th of 2019, and here we are a month later and I’m still struggling to find matches. Sitting in a lobby and waiting for 10 minutes while sitting in a comfortable chair is one thing, but wearing a heavy HMD on your face and standing in place while doing the same thing is frankly tiring. We’ve literally tried for weeks at this point to no avail. Playing single player, or setting up time with a friend for cooperative play is great, so if you are going to pick up Battlewake, make sure you’ve got a friend to play it with

With fantastic graphics, balanced and engaging gameplay, and a brief but fun single player campaign, Battlewake is an amazing VR pirate combat game. The only thing it doesn’t have is a larger audience. My crew is ready, and it’s time to set sail -- who’s with me?!

Ron Burke is the Editor in Chief for Gaming Trend. Currently living in Fort Worth, Texas, Ron is an old-school gamer who enjoys CRPGs, action/adventure, platformers, music games, and has recently gotten into tabletop gaming. Ron is also a fourth degree black belt, with a Master's rank in Matsumura Seito Shōrin-ryū, Moo Duk Kwan Tang Soo Do, Universal Tang Soo Do Alliance, and International Tang Soo Do Federation. He also holds ranks in several other styles in his search to be a well-rounded fighter. Ron has been married to Gaming Trend Editor, Laura Burke, for 21 years. They have three dogs - Pazuzu (Irish Terrier), Atë, and Calliope (both Australian Kelpie/Pit Bull mixes).
Related Articles: Battlewake, Let's Play, VR
Share
Tweet
Share
Submit