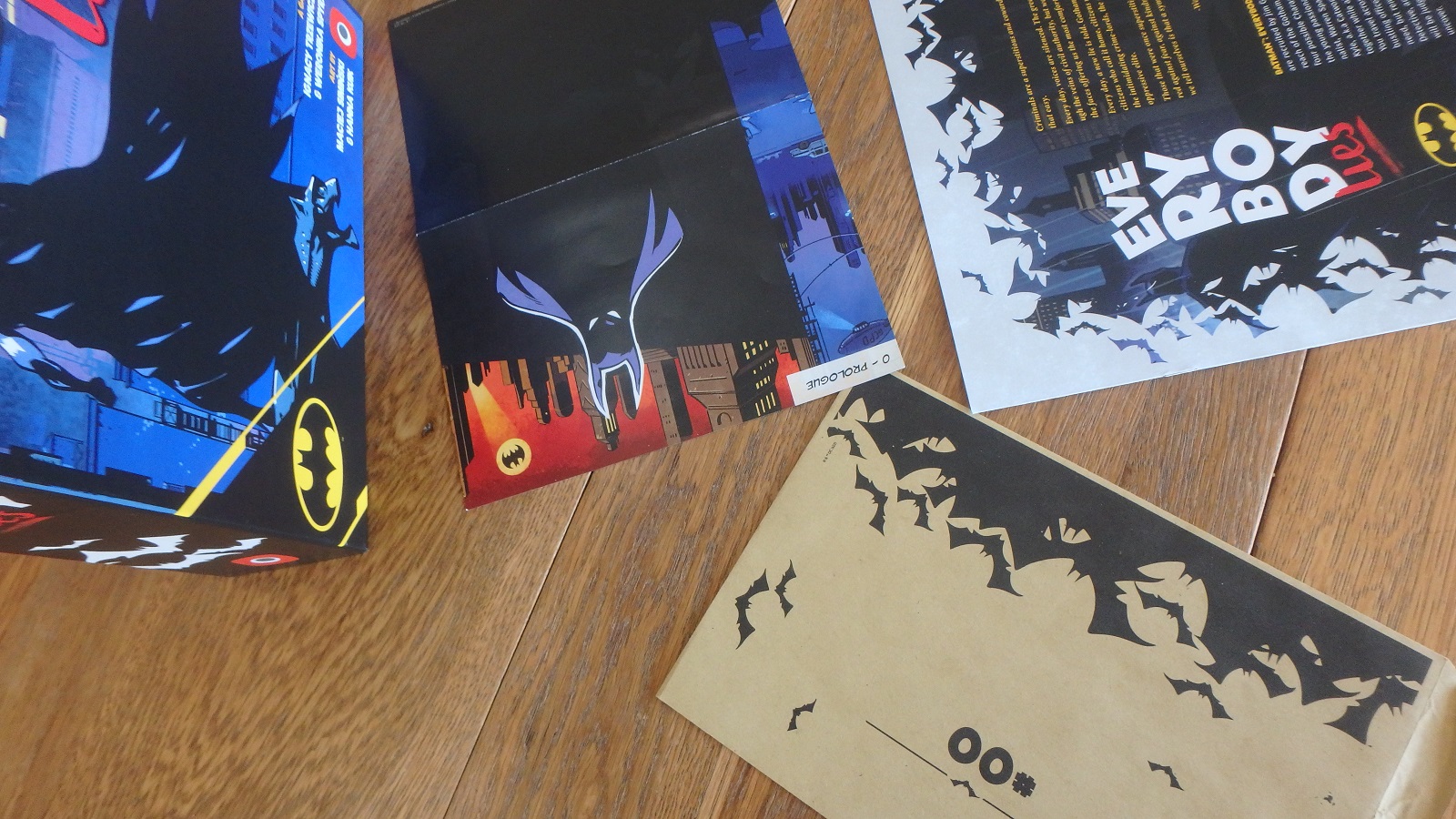 If you asked me to summarize the experience of playing Batman: Everybody Lies, I would tell you it felt like someone wrote a mystery set in Gotham City and made it a multimedia  multiplayer choose your own adventure with board game elements. You may counter that that is pretty lengthy for a summary, but in my defense, there’s a whole lot to explain here. There are character tiles for each playable character, a main board with a time track and several flippable locations. Add on the game’s website, all the miscellaneous tokens, and the several decks (which come all packaged together and need to be separated despite multiple warnings not to look ahead and potentially spoil yourself, which feels like a production mistake), and you’re looking at a whole lot of mechanics that Batman: Everybody Lies is asking you and three friends to jump into blind. To Portal Games’ credit, they did include a prologue to help players learn this game’s systems, but there is still quite a bit of rules overhead, especially considering how the rulebook errs on the side of being vague when explaining things that may tip its hand for the story. 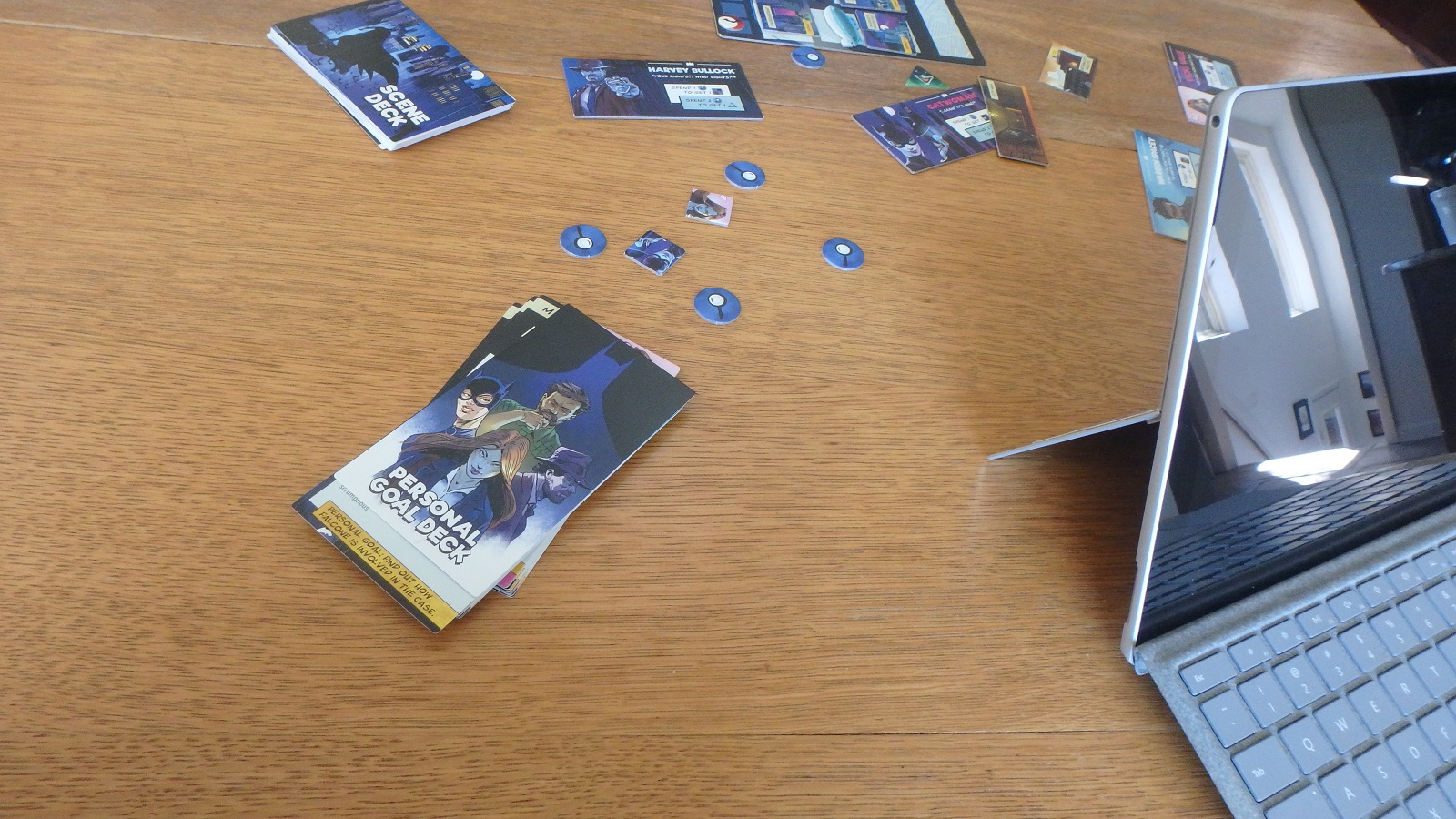 And so I spent a prologue session of passing around the tablet I had the website up on, along with the decks that had to be carefully thumbed through, only looking at the top left corner to find the identifying information to avoid spoilers, during which I came to the first of my conclusions that sunk Batman: Everybody Lies for me. This isn’t, and probably never was, best served being sold in the format of a board game; it’s a great mobile app that is held back by existing in the wrong medium. Seriously though, every piece of this game that isn’t already digital is vastly improved by becoming digitized. The cumbersome rules and pilfering through decks are two of my biggest strikes against this game, and both are entirely removed by transitioning to a digital implementation. The superfluous-feeling main board with the time tracker and series of location tiles that are largely disconnected from the included map of Gotham City would also be improved. Not to mention the cards asking you to look to the digital stuff. Don’t get me wrong, I understand how physical components are important to the overall experience of a board game, the strange mix of public and private information across all the different areas you can retrieve it from just wildly skewed the effort-to-fun ratio.

I didn’t mention the other reason why Everybody Lies probably shouldn’t have been a board game, and that’s the elephant in the room whenever the topic of detective board games comes up. That elephant goes by the name of Sherlock Holmes Consulting Detective. It’s entirely possible that I simply walked into this game expecting the wrong things from it, but given the shroud of mystery around its marketing aside from “ detective game” and “ shiny Batman license,” when you take into account my apathy for comics characters, my only point of reference is the detective portion, and honestly, that’s where it comes up the most lacking, especially when contrasted with the benchmark of Consulting Detective. If I were to use a video game metaphor, Everybody Lies is Telltale’s Batman, where players are given a series of prompts to respond to, but the core feature is the story, while Sherlock Holmes is Rocksteady’s  Arkham series, a gigantic sandpit with no hand holding, where you can do whatever you think is best. Everybody Lies’ lead mechanic grabs players by the shoulders and asks them to decide between a handful of options to advance the story, but Consulting Detective just drops a pile of information in front of them and leaves them to do with it what they will. One of my favorite memories of playing Consulting Detective is when someone insisted we follow up on a red herring, and the game stopped just short of out and asking”why did you do that? That was obviously a waste of your time.” Consulting Detective is a sandbox where players are free to make mistakes, like going to a bad address and having nobody home, or even absolutely tanking your score visiting your second cousin you hadn’t  seen in a while just to catch up, but Everybody Lies isn’t interested in that, you’re reading somebody’s mystery story in a multimedia board game. And that isn’t to say people who like it are wrong, but I really do think that a lack of clear description in marketing has really hurt this game, similar to House Secrets. 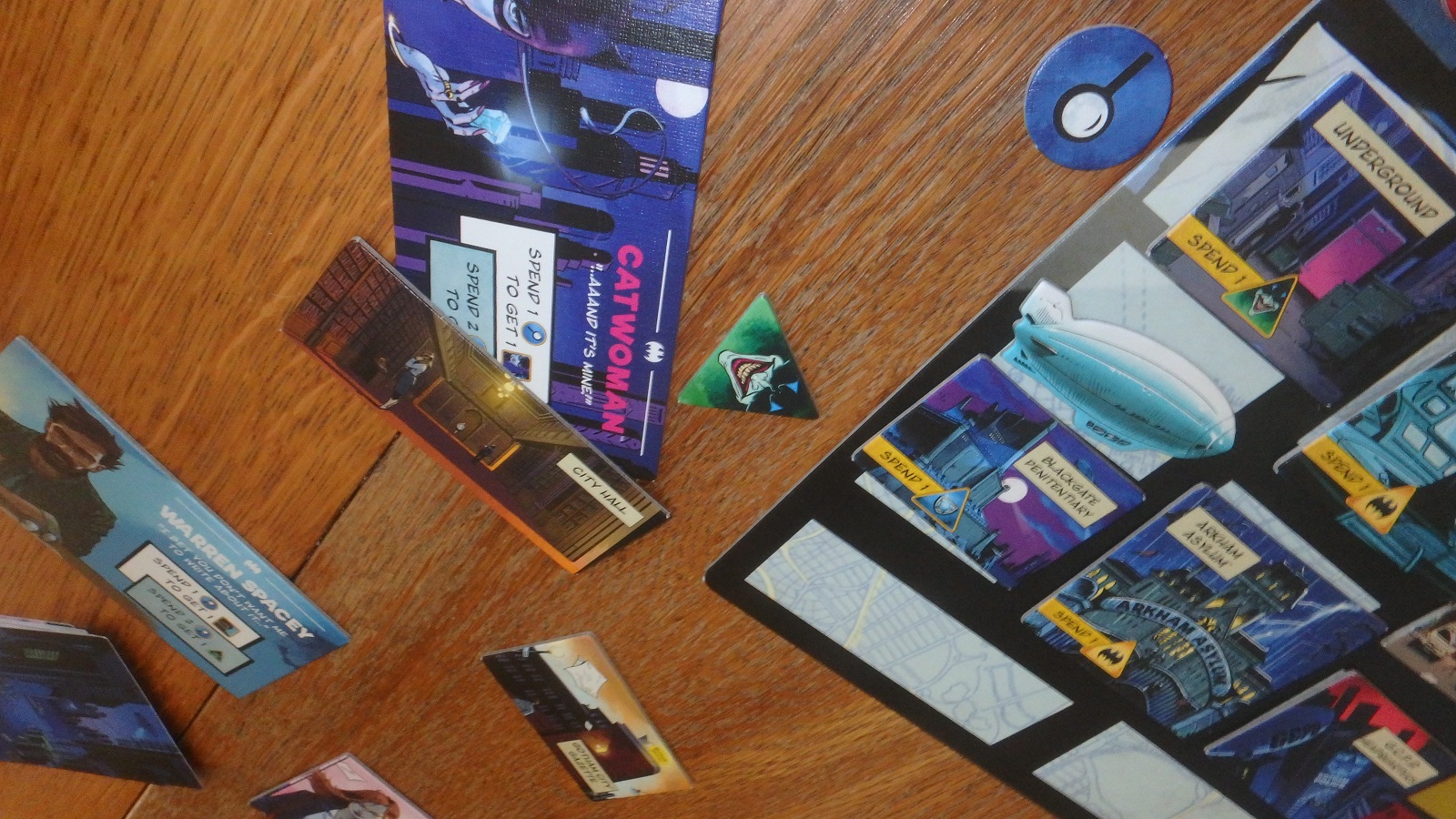 Batman: Everybody Lies is another ambitious title in Portal's detective line, and as they try to find the sweet spot between trying to do too much and too little, it really feels like they were too close to the former, but I can see the promise in this system. Just go into it knowing you're gonna be experiencing a story more than doing detective work, and it may sing for you.

Nick grew up reading fantasy novels and board game rules for fun, so he accepted he was a dork at an early age. When he's not busy researching the intricacies of a hobby he'll never pick up, Nick can be caught attempting to either cook or befriend local crows.
Related Articles: Tabletop
Share
Tweet
Share
Submit