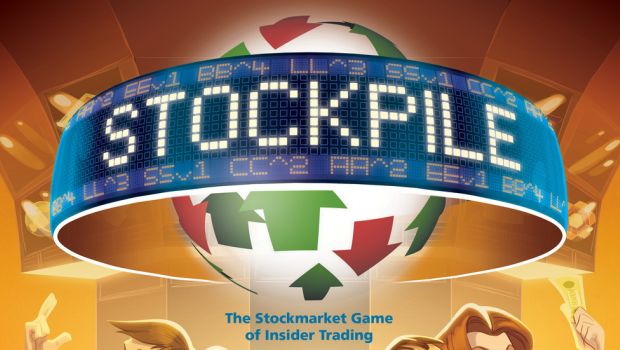 Before we get started, let me say that you really should just stop reading this right now, get in your car, drive on down to your friendly neighborhood game store and get yourself a copy of Paperback. It’s a little difficult to get a copy, since first time designer Tim Fowers is self-publishing the game. So far be it from me to be the reason why you delayed your trip and missed the last copy. Go! Now! Quick!

Paperback is a delightful game. Without exaggeration, I believe this is a game that belongs in every gamer’s collection. Seriously, how did we get all the way to 2015 without a deckbuilding word game? How did no one think of this before? Well, bravo to Tim Fowers, who obviously DID think of it. And I am certainly glad he did, because I’m of the mind that deckbuilding and word games are as perfect a match as perhaps can exist in gaming.

These books aren’t going to write themselves…

Deckbuilding games are pretty simple in their execution. You start off with a small deck of low power cards and draw a certain number (in the case of Paperback, five) of cards. Then you play these cards in such a way that you can “buy” another more powerful card which is on offer in the middle of the table. All five of the cards in your hand plus the one you just bought then are placed in the discard pile where they will stay until you have no more draw pile. When your draw pile runs out, you shuffle up the entire discard pile and make a new draw pile. In the words of the legendary crooner Brian McKnight, “step 4: repeat steps 1 through 3.” Yes deckbuilders can get slightly repetitive.

Sooner or later you will begin to draw some of the better, more useful, more powerful cards that you purchased over the last turns. As you continue buying cards, you begin to build up your deck with cards that you believe will help you. As you compile more and more cards, you may want to get rid of some off those weaker starting cards so you can draw less of those and more of the stronger ones. Furthermore, at some point in the game, you will want to pivot from buying cards that are “useful” to the point-value cards that help you win. At the end of the game, you count up the point cards in your deck – most points is the winner. Voilà “deckbuilding.”

Truth be told, I’ve never been that big a fan of the deckbuilding genre. The mechanism of drawing cards, playing cards and trying to string together various combinations never really appealed to me that much. Theme is difficult to execute because drawing some cards and playing them just isn’t a very referential act – it’s tough to achieve immersion into a theme when what you’re actually immersed in is the game’s mechanisms. What’s more, buying the point cards that you inevitably need to buy just never seemed that fun to me. “Look at this! A useless card that will do nothing for me until the very end of the game! I will acquire it. What fun!”

Look how nicely the cards are organized!

Now to be fair to the genre, deckbuilders have come a long way since Dominion and there are a lot more mechanisms out there than I am describing  – even a few that have made the theming relatively successful (see Realms, Star). But what made Paperback stand out to me is how well the game and theme work while mainly sticking to basic deckbuilder mechanisms. There are not a lot of mechanical frills to this game. And I think this may have been Tim Fower’s single wisest design decision. Finally we have a deckbuilding game that is unafraid to completely embrace its true nature as a themeless abstract game. Paperback isn’t trying to do much more than draw cards and make words. And ironically, by staying true to the basic draw, play, score and buy mechanisms, the game begins to succeed thematically in surprising yet ultimately foreseeable ways. You draw letter cards and you make a word with them. You’re literally WRITING words. And the point cards that you inevitably have to buy? They are made to look like the covers of delightful little paperbooks. What’s the theme of this game again? Imagining yourself as a paperback writer creating pulpy stories? Oh yeah, you are literally doing exactly that thing. I repeat, you are writing actual words in order to create a book. You have no idea how happy this awesome theming has made me. Well, hopefully you are getting some idea.

The gameplay of Paperback is pretty simple as I’ve mentioned. Players start out with a deck of ten cards, comprised of the five “Wheel of Fortune letters” (R, S, T, L, N) and five scoring/wildcards. Unlike Dominion, where point cards are completely useless until scoring and mainly muck up your hand, the point cards in this hand are wild cards that can stand for any letter. In addition, there is a common vowel card that can be used within any words you make. After you make a word, you score the letters in the word and buy as many cards as you can afford. The letters on offer in the various piles are higher scoring, more useful and even include some special abilities like draw another card or awarding extra points if certain criteria are met. Some cards have 2-letters in common pairings like “NG”, “CH” or “TI”. Players are incentivized to make high scoring words with crazy letters like X and Z to finance the purchase of high scoring cards (not to mention awesome looking cover art). At the same time, players are also incentivized to create especially long words to be awarded the top common card (thus revealing the next common vowel).

The game ends when the last of the four common cards has been purchased or two piles of scoring cards have been exhausted. Overall, the game lasts about 30-45 minutes and slightly longer with more players. There are a number of variations to the game that add a bit of flavor to the basic game, my favorite being the Theme cards that encourage making words within a certain category like “Western” or “Murder Mystery.” The components in Paperback are wonderful. The cards are well made, text is clear and the artwork that created the pulpy looking paperback covers on many of the scoring/wild card is delightful. The box comfortably holds all the cards, sorts them using the convenient dividers provided and has plenty of room for expansions.

Paperback is a standout deck-builder where players use letter cards to create words. A brilliant amalgamation of Scrabble and Dominion, this game checks a lot of boxes for me. Paperback is an excellently designed and beautifully produced game will be around for a long time.