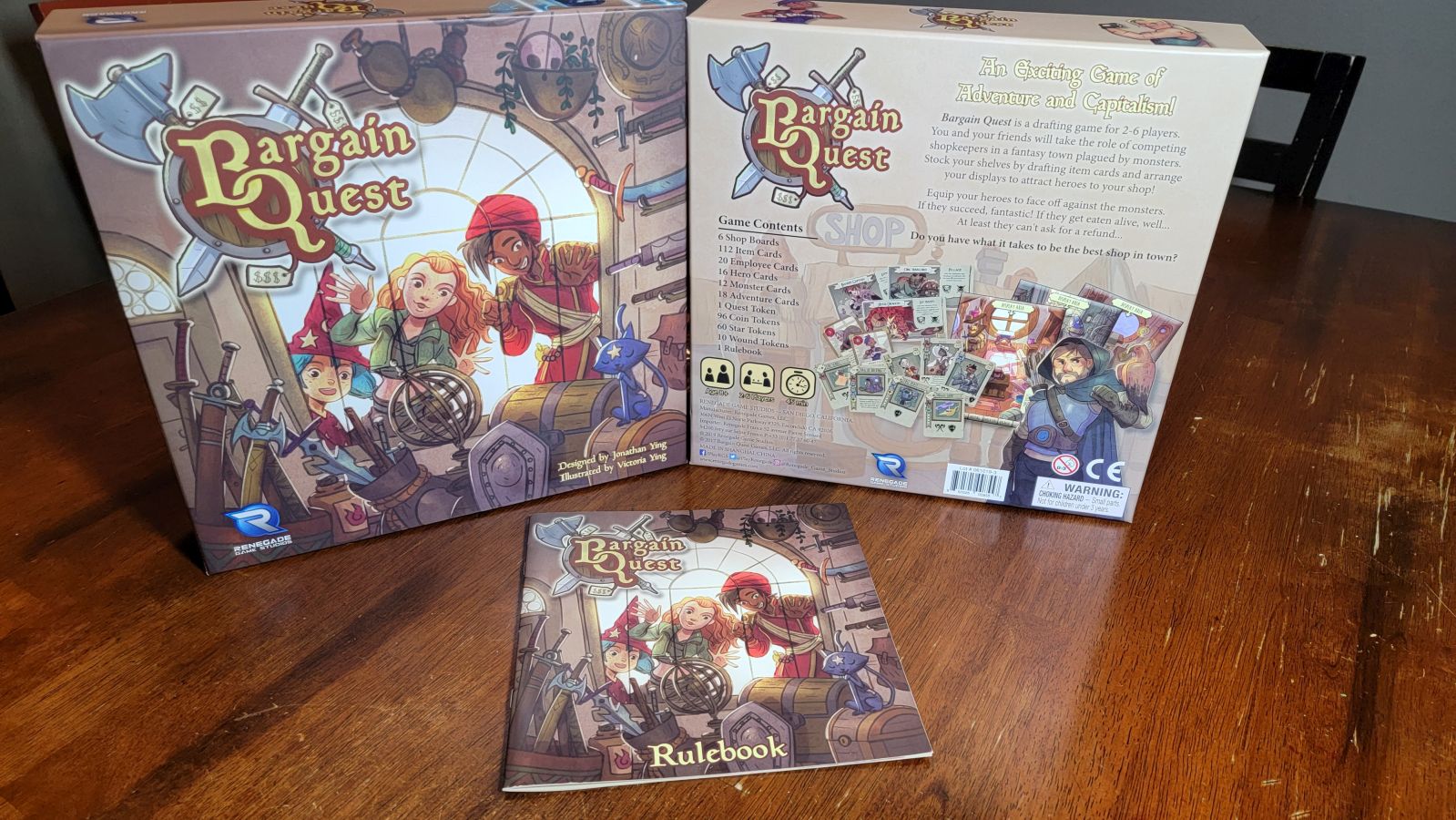 With more board games hitting shelves than ever before, there are bound to be hidden gems, overproduced duds, and blockbuster hits. At first glance Bargain Quest plays like a hidden gem, only to be found masquerading as a loveable try-hard. Produced by Renegade Game Studios and designed by Jonathan Ying and Illustrated by Victoria Ying, Bargain Quests offers a cartoonish take on a fantasy-themed game. For 2-6 players the game box says it plays in about 45 minutes, but I think it is more like two hours for player counts higher than 3.

A cartoony and fun adventure, Bargain Quest starts out with what is a solid premise, and depending on your feelings towards luck-based games, presents a simple, yet satisfying experience to be had by the end of the game. Bargain Quest at its core is a card drafting game that finds you running your own shop for adventurers to visit. While running your shop certain adventurers must be lured to your shop by the promise of potential goods you would sell them for their adventures. Over the course of the game you’ll do a variety of actions such as, drafting item cards to sell to adventurers, setting up your shop’s display, and sending the equipped adventurers out to fight monsters. 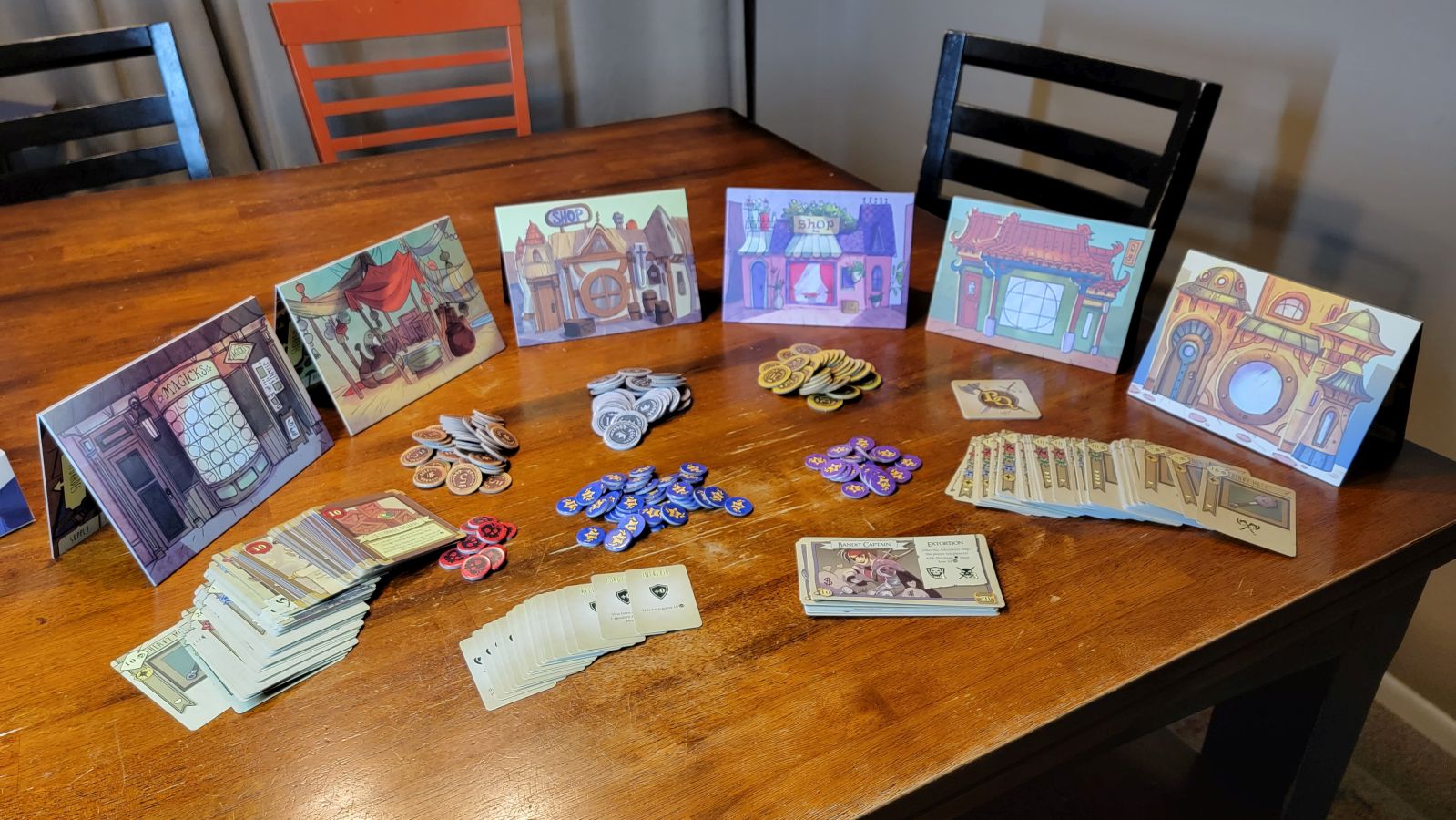 Bargain Quest can take a varying amount of rounds to finish playing. Each round consists of six phases. The phases are supply, display, shopping, adventure, upgrade, and storage. To start the game each player chooses one of six asymmetric shops to run. After this players are given five coins to start the game with, and the monsters attacking the town are chosen from different tiers of monsters to form the monster deck.

In the supply phase, each player is dealt four cards from the item deck. Players then proceed to draft item cards one at a time, passing clockwise till each player has a set of four-item cards. Each item card has a few different offerings to them such as added attack, added defense or ways to save/keep heroes around instead of them dying to any monsters. Every card also has one to four identifiable symbols on them which determine which heroes can use which items. 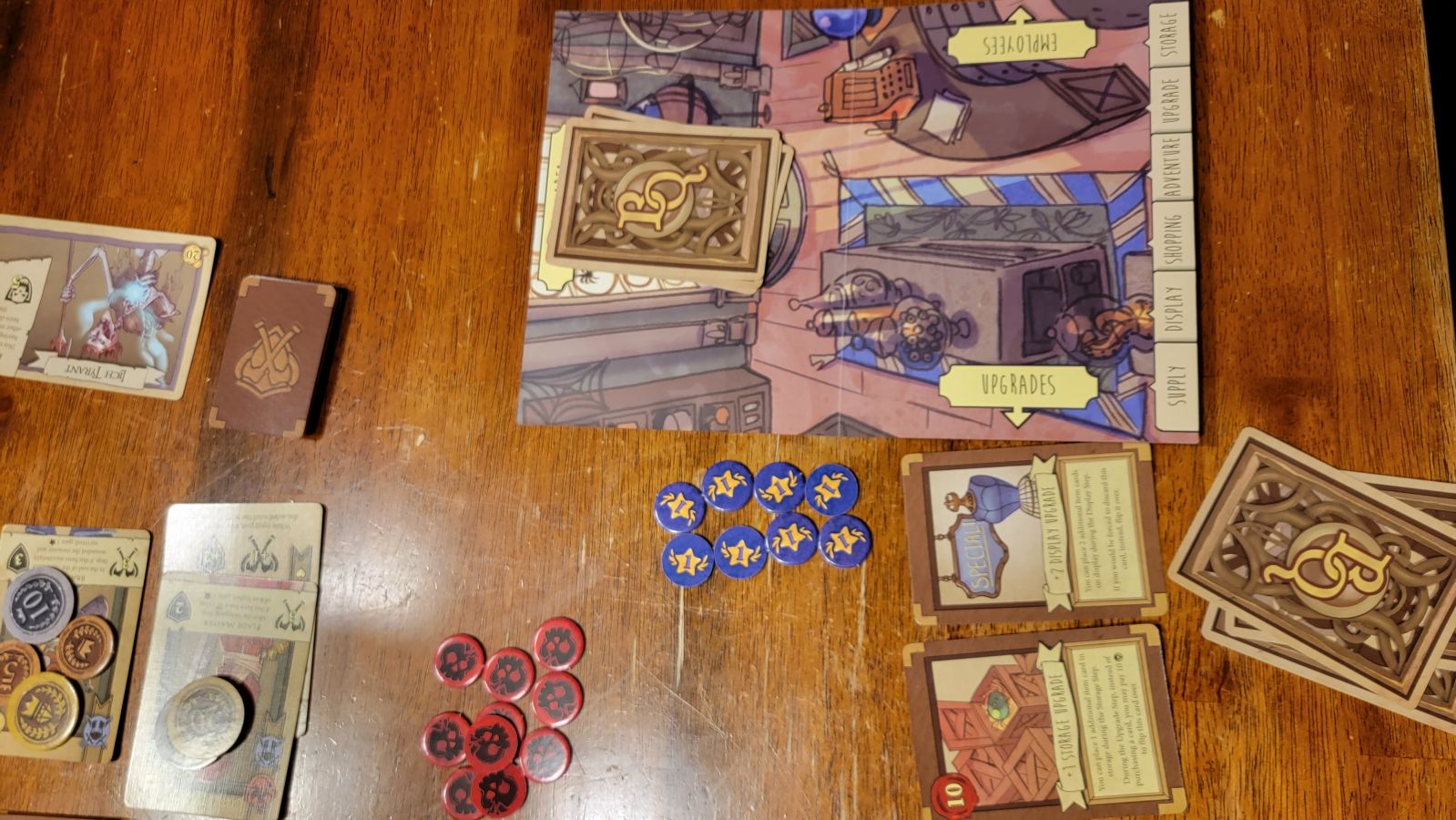 After drafting the hand of four-item cards, players get to choose which item they want to place in their shop’s display. This is known as the display phase. The display is what entices certain heroes to come buy items from your shop. Displayed items are chosen based on which symbols that the available heroes have and which symbols are present on the item cards you have drafted. In this case, if the player displays an item with a blue symbol then only heroes with the blue symbol are interested in visiting the player’s shop to buy items. The trick here is the items that players ultimately display typically cannot be sold to the heroes.

In the shopping phase, players go one by one selecting which hero is going to visit their shop and buy items. This selection is based on the aforementioned symbols that dictate which hero is enticed by the display items the players set out in their shops. If there is not a matching symbol to heroes left, then the players who could not select a hero based on symbols wait till those who can match symbols choose their heroes. Then they get to choose their heroes out of who is left. The heroes then enter the shops and based on the hero’s available money they purchase items from the players’ shops. Any leftover money stays with the hero till the next round. 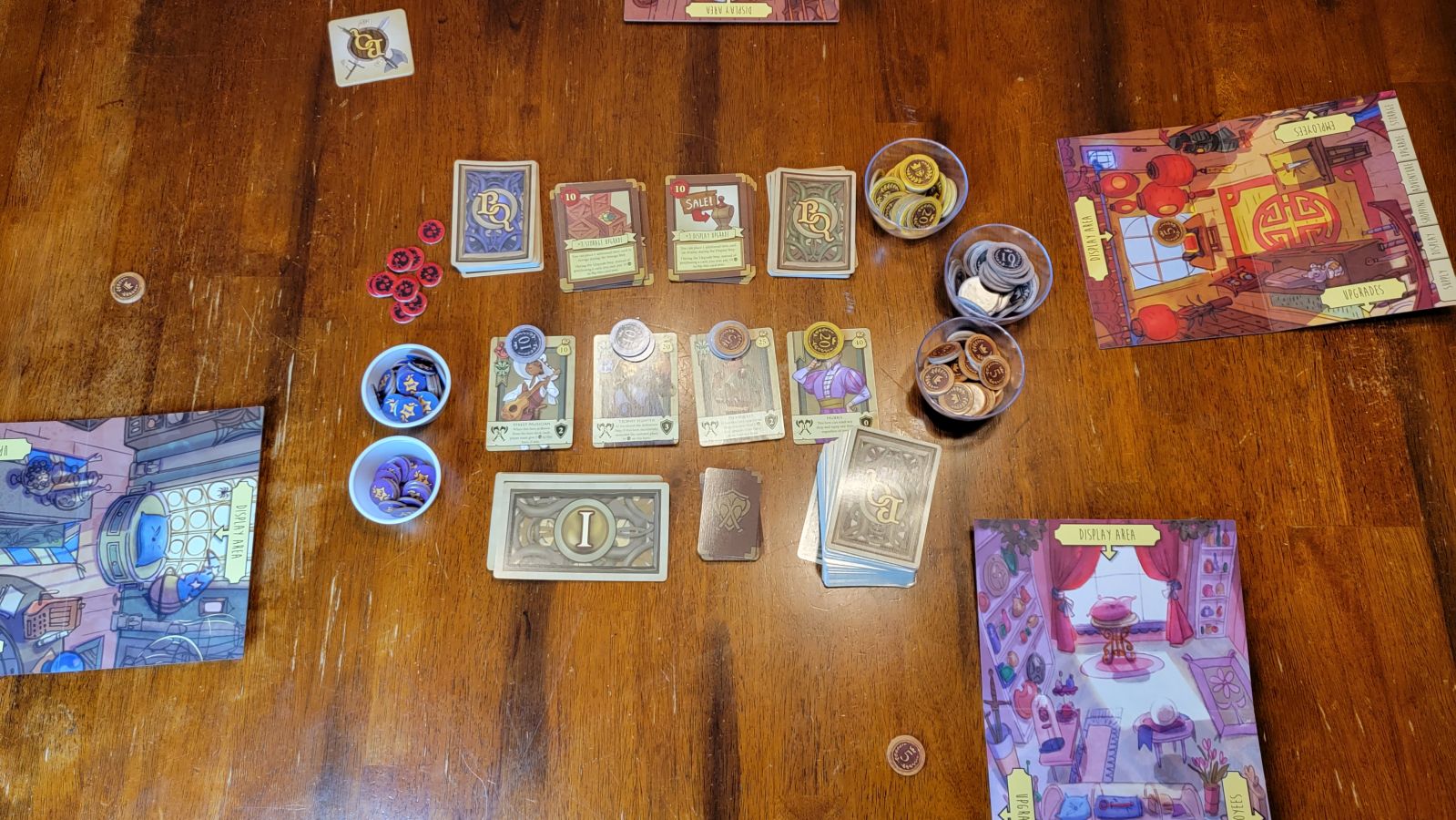 Once heroes have completed buying items, the heroes then go out to fight the monster that is attacking the town. In the adventure phase, heroes battle the monsters and the monsters fight them back. A fight with a monster in this phase consists of comparing your attack power with a monster’s defense rating. Then the monster attacks based on its attack power and your defense rating. If your attack here is equal or higher than the monster’s defense then you successfully wound it. If the monster’s attack is higher than your defense then your hero will not survive the fight and is removed from the game. To defeat a monster you must wound it a number of times equal to the player count. Once the fighting is over heroes earn money based on if the monster is alive like a consolation prize for their efforts, or a substantially higher amount if they have managed to slay the monster. Dead heroes receive no money. 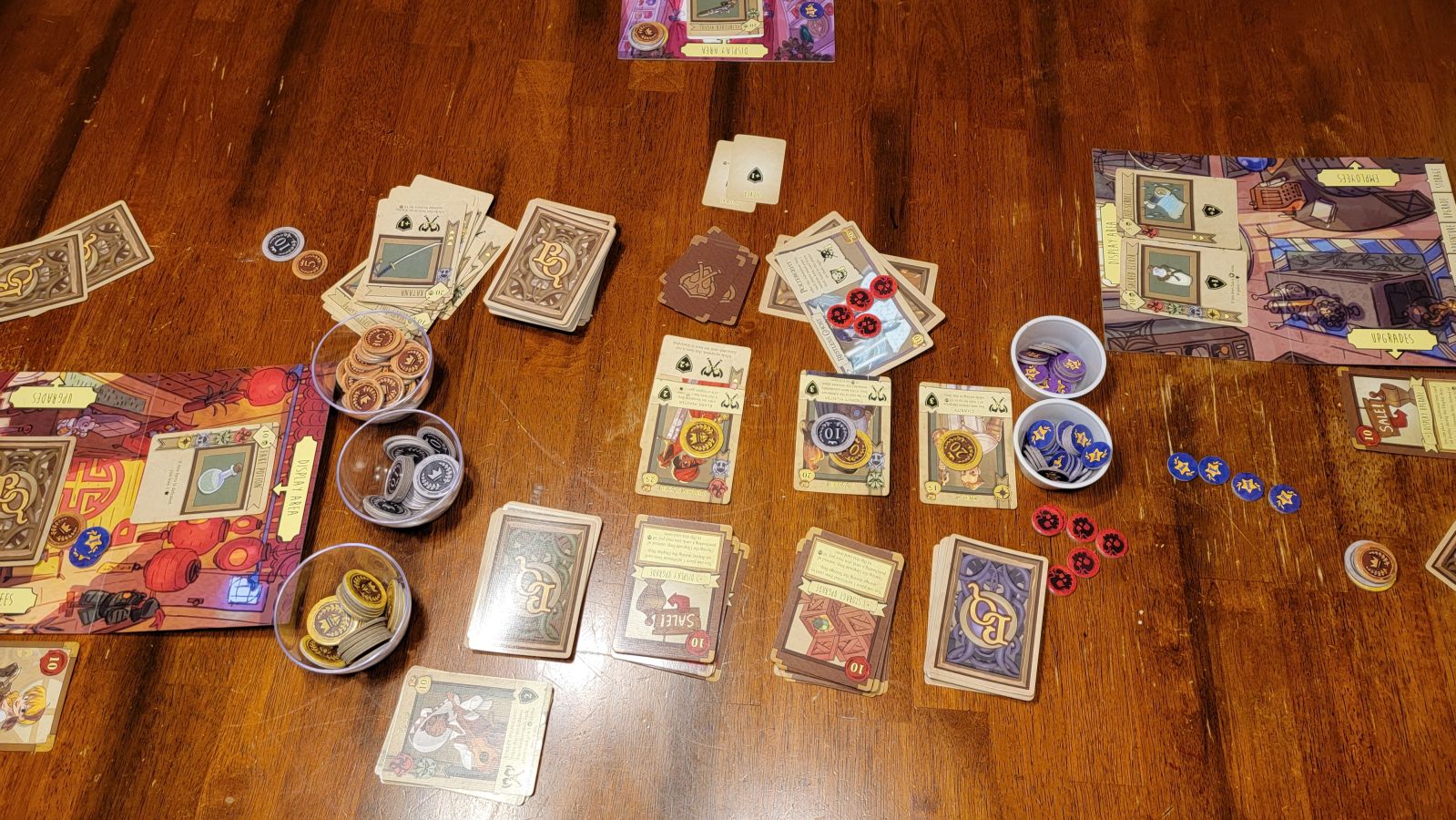 After playing a four-player game of Bargain Quest, a few different things stood out to me while others fell kind of flat. A few of the things that fell flat were, card/component quality, the amount of luck that is involved in cards that are given for drafting, and overall time spent playing what should have been a shorter game. The standouts were the overall theme, the individual shops had a fun yet inviting aesthetic to them, the strategy that the game ultimately offered.

Going into my experience with Bargain Quest, I was not sure what to expect, but I was both pleasantly surprised and underwhelmed. With the fun I had running a shop and selling items to heroes that in turn fought monsters, I had hoped Bargain Quest would have a more impactful feel after points were counted, but in the end I felt like the point system was a bit lackluster. At the end of the day, Bargain Quest was a fun, yet forgettable experience that the only lasting memories I take with me are how much I liked the design of the shops/player boards, and how much of a letdown the quality of the cards were.