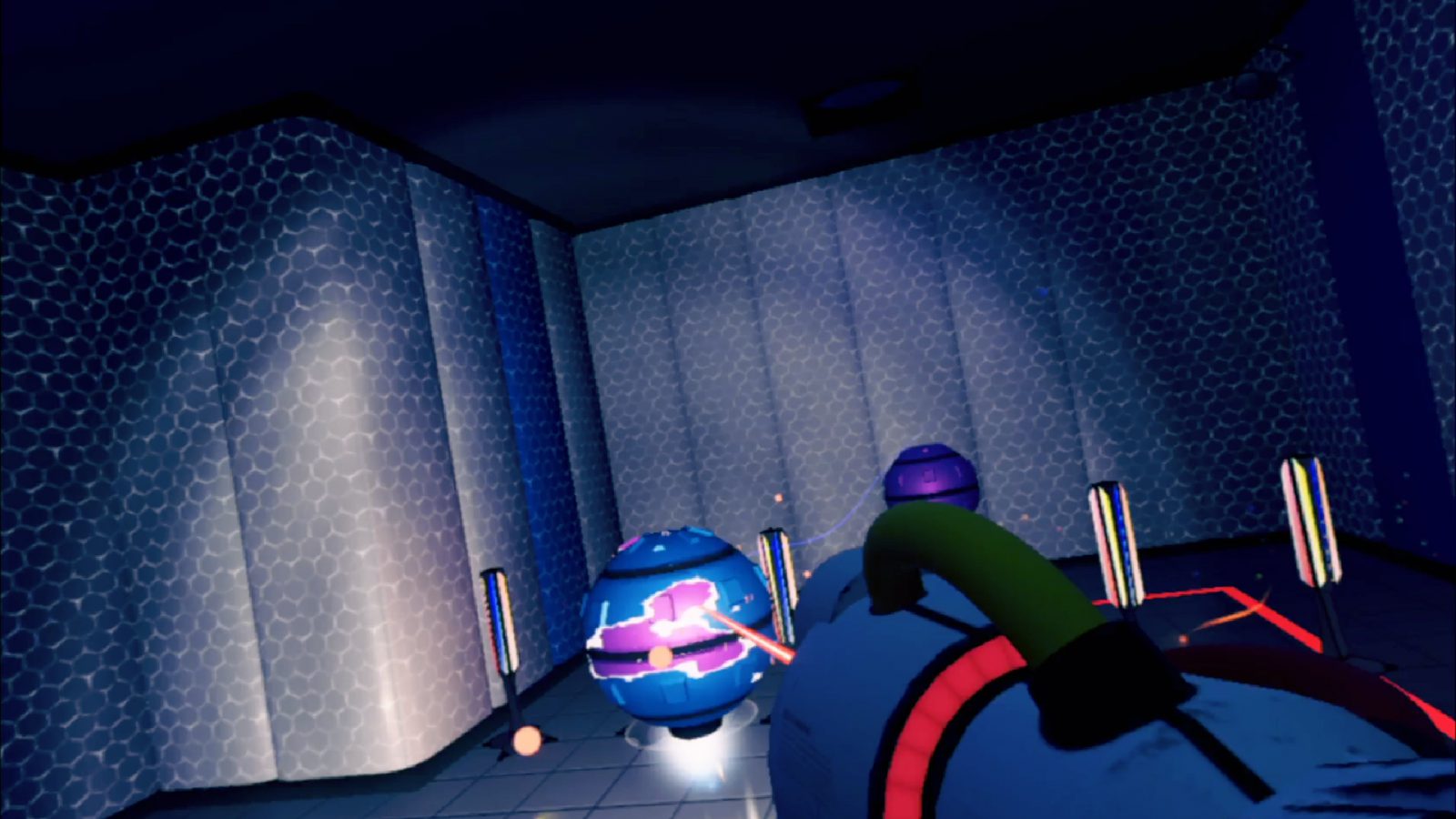 When we reviewed ChromaGun last year, we referred to it as a “poor man’s Portal.” Now that it’s been released for PlayStation VR, I can safely say that this version of the puzzle shooter is not a “poor man’s portal,” it’s a “poor man’s portal in VR.” This necessarily doesn’t mean that it’s a bad game, but it does little to change any of the issues with the original release while adding issues that weren’t there before. 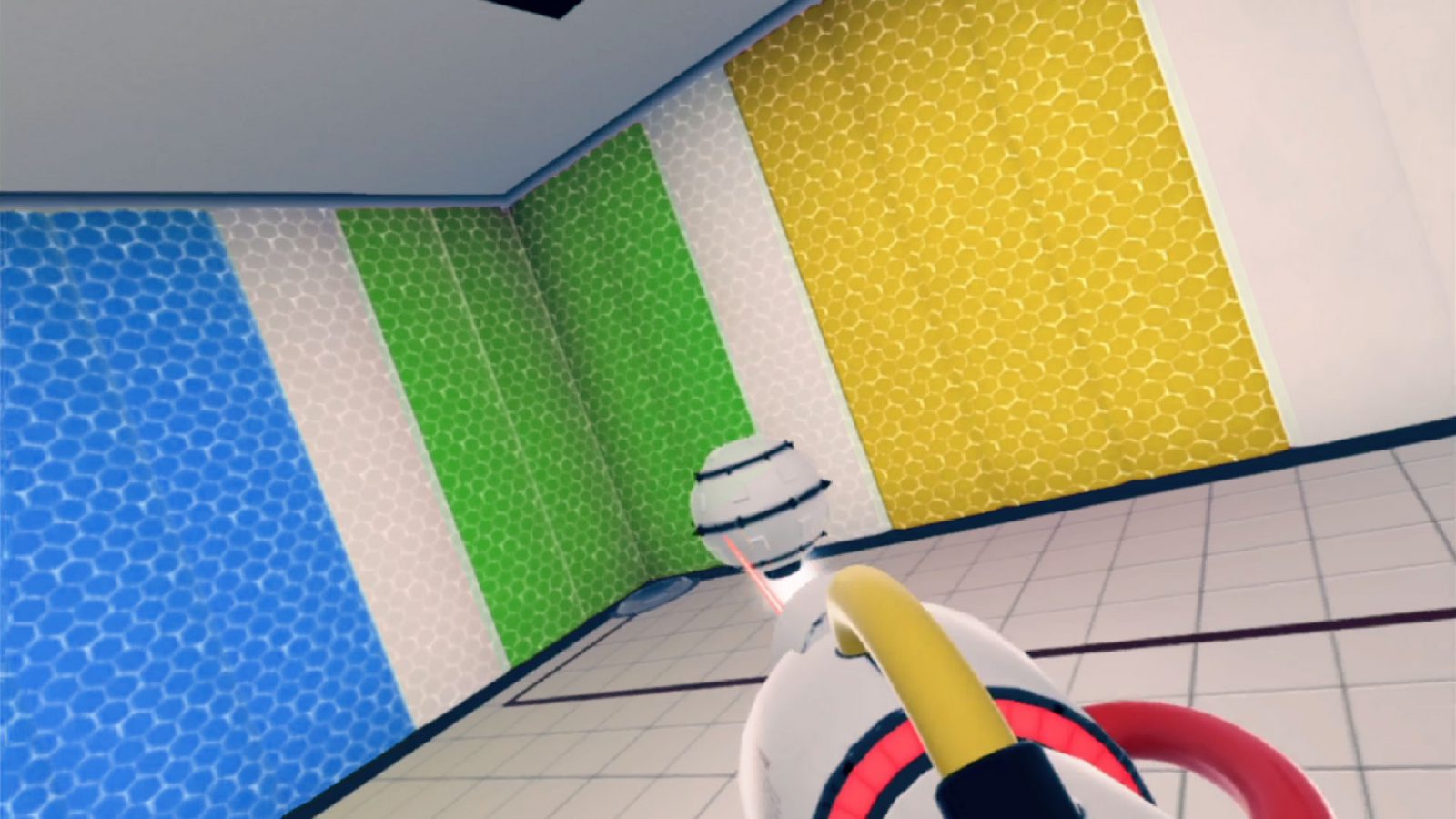 ChromaGun VR is a first-person puzzle game where the main mechanic of the game is painting specific walls to attract balls of that color to those walls to get them to hit switches to open doors. Each floor changes things up slightly and new elements of the puzzles are added over time.

While plenty of these puzzles are challenging and clever in their own right, they are all built up from the same concept: get the ball to the switch somehow. These balls, or as the game calls them, “working droids,” are attracted to walls of the same color in a magnetic effect and will even stand in the middle of multiple walls if they are painted close to each other. 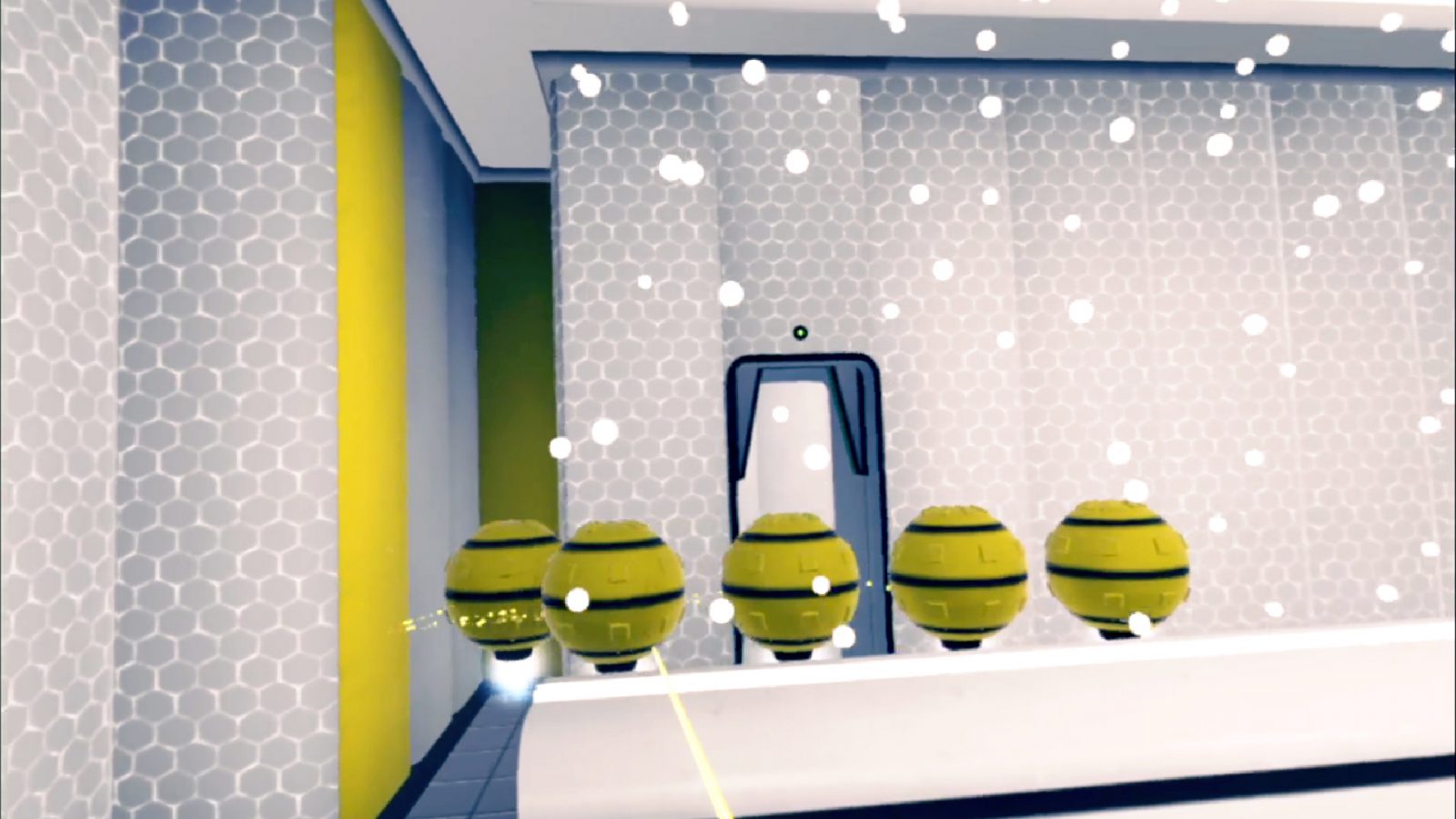 There are several hazards added later on as well. Quickly, you learn about “active worker droids” that will attack you when you either hit them or even by default. Being hit by these guys enough will kill you and force you to restart the floor. The same can be said of electric tiles on the ground that will fry you instantly. Sometimes, you’ll have to restart the entire floor, as painting even a single wall the wrong color will lock you out of completing the puzzle. This can be frustrating, especially since the length of some floors can be daunting. It’s unfortunate to see that this issue hasn’t been fixed from the initial release.

The story itself is similar to Portal as well, with someone talking to you while you continue your objective. Unfortunately, most of his jokes fell flat on me and felt like another imitation at Portal’s aesthetic. Instead of waiting until the end to try to kill you, however, everything goes south pretty quickly. The facility starts to fall apart, and the need to escape makes things incredibly tense, but suddenly it’s over and you’re back to testing. Even when you make it to the end of the game, the only joy is the pride of figuring out a difficult puzzle. Otherwise it just sort of… ends. At least with Portal, you eventually make it to the mastermind behind it all and make them pay for trying to murder you, but here you aren’t given the sweet taste of revenge. 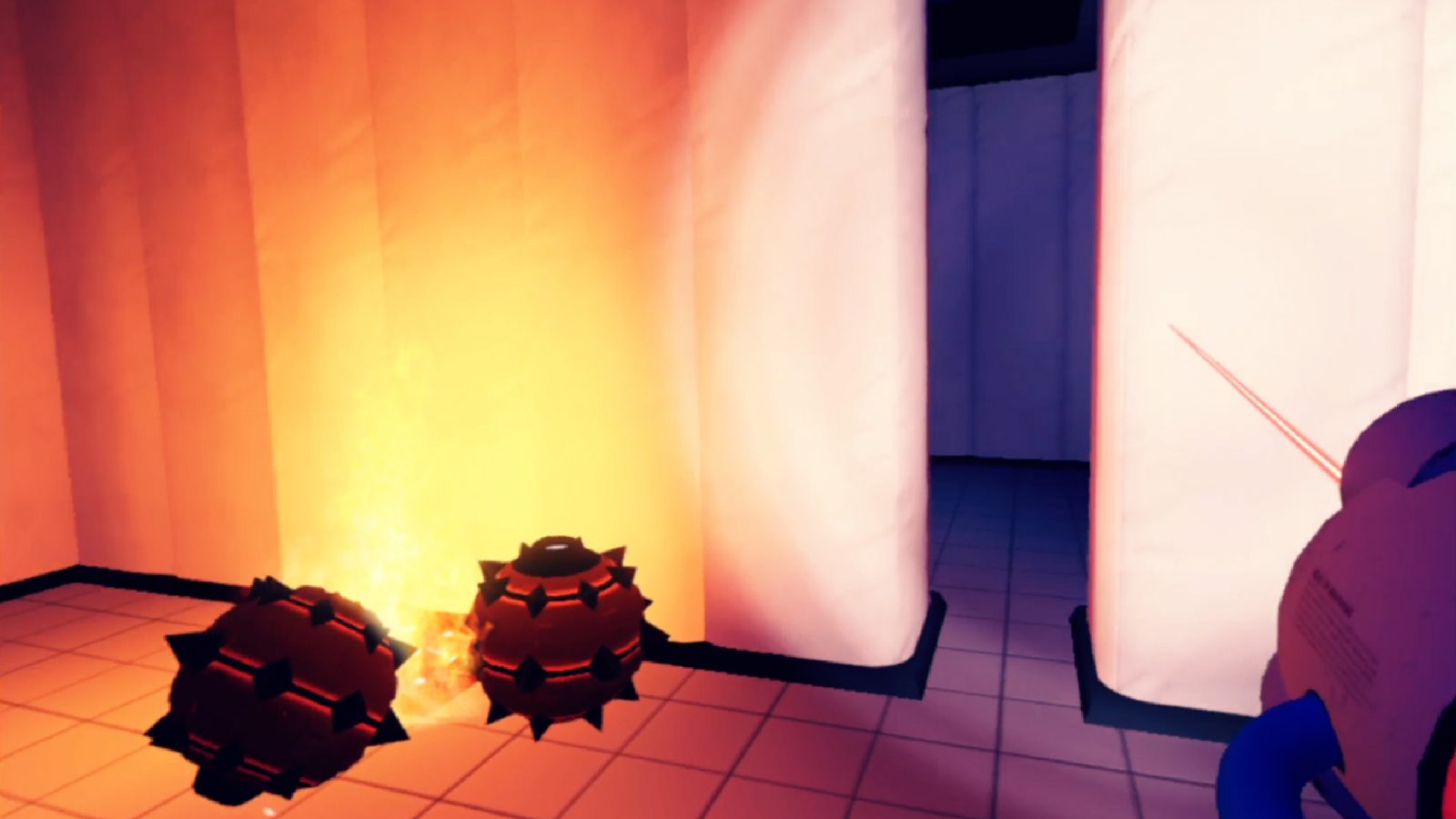 There are a few tweaks with the VR version of the game, but none of them are very substantial. As VR games demand a different level of power, the team had to opt out of using dynamic lighting this time around. I didn’t find this distracting when I played it, but it’s definitely a downgrade when compared to the other visually. What’s even more unfortunate is that the game stutters, especially when you turn snap-turning off. I can stand a downgrade in visuals, but the stuttering is disorienting and hinders the experience.

The controls of the VR functions work well though, as you can control the gun by moving your controller and use the sticks to move yourself and the camera. Instead of having a button dedicated to each color, you’re now switching the color you’re shooting with L2, as a beam appears where you’re aiming indicating which color you’re going to fire. This game would greatly benefit from the Aim Controller, as even using the standard DualShock 4 felt fluid with shooting. 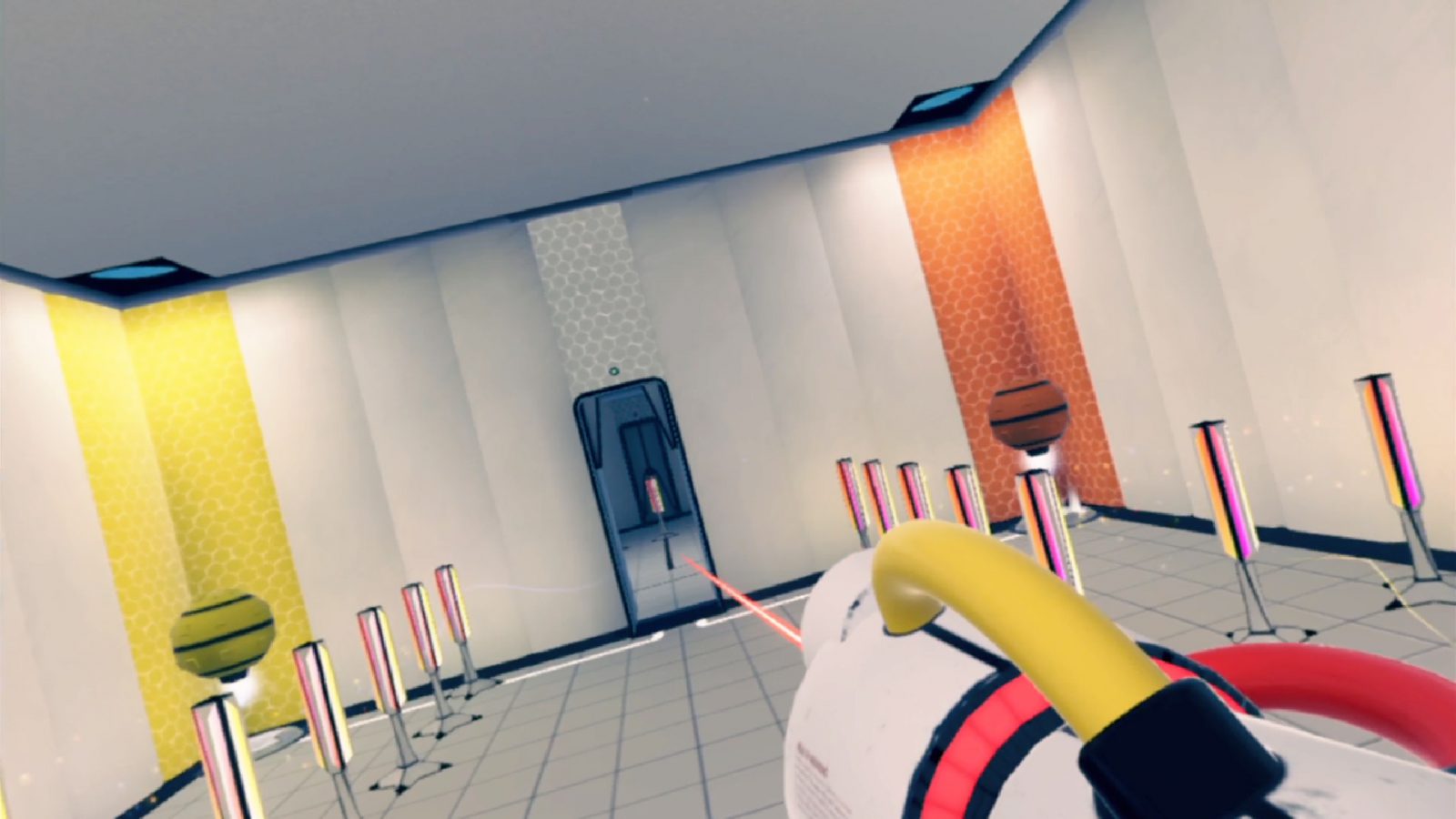 If anything, the VR function is one thing Portal may never have due to the nature of its puzzles, which gives ChromaGun points over it. ChromaGun is paced more slowly, save for select instances, which allows it to fit the VR platform better. I never felt disoriented, and could focus on solving the puzzles at my own pace.

While ChromaGun can be incredibly challenging with head scratching puzzles, having the whole thing based around getting the ball to the switch makes it difficult to remember anything standing out well. The music reinforces this, as it rarely changes up throughout the game. The chapters feel more like barriers between “avoiding being set on fire” and “knowing you’ll soon have to avoid being set on fire,” with little thematic variations between them.

ChromaGun VR doesn’t do much to improve on 2015’s puzzle shooter, and the game takes a hit both visually and in performance in its attempt. The mechanics work fine, but bland repetition of puzzle elements only hit a few primary colors rather than the rainbow of features to keep this an engaging experience all the way through. If you haven’t played ChromaGun yet, this may be the way to experience it, but otherwise, you’re fine with sticking to the original version.

Sean Anthony likes to combine two of his passions: gaming and writing. Gaming has been a huge part of his life ever since he played his first game as a child, Kirby's Adventure. He aspires to have his name attached to an article that makes the whole world go, "Huh, that's neat, I guess."
Related Articles: ChromaGun VR, VR
Share
Tweet
Share
Submit