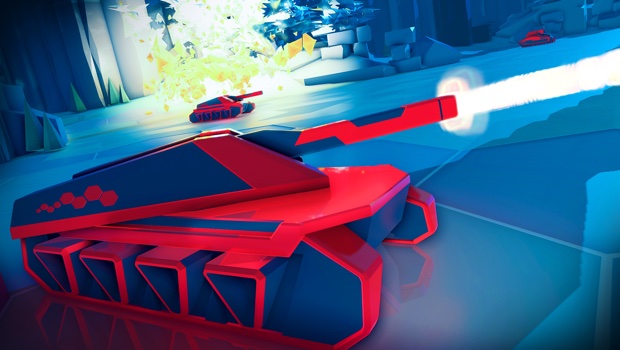 It’s always a shame when a game shows a lot of promise and doesn’t deliver. It’s even worse when that lack of delivery is largely due to balancing issues and poor gameplay design decisions. Rebellion’s Battlezone for the PSVR is one such game, and the hint of a good game that can be glimpsed periodically makes the fact that it just doesn’t work all the more disappointing.

The game nails the aesthetic, hearkening back to the visuals of two of its eighties’ forebears – the original Battlezone and the neon vector splendor of TRON. My first five minutes of playing an offline mission had me grinning from ear to ear based on the look and feel alone. That experience was a fleeting moment, however, as after numerous attempts of trying to get through a single player campaign at a variety of difficulty levels and map sizes all inevitably ended the same way — a brutal beat-down by the horribly unbalanced enemies and unforgiving ammo and life management mechanics.

Inside the VR helmet, the retro-futurism look of Battlezone shines. The simplistic and angular tanks feel equal parts antique and futuristic as diamond plate steel forms the exterior and monitors swivel and extend to display information about health, shields, and ammunition.

The battle takes place across a hexagonal map with each stop procedurally generated based on a handful of parameters such as map size and enemy type. Dotted randomly throughout the map are also supply tiles, enemy stronghold towers, and the enemy base itself. The objective is to slowly crawl across the map, steadily growing your weapon capability, and supposedly destroying the enemy base. The problem is that it’s damned near impossible.

There are a handful of mission types, some hard and others harder, and frankly, how far you go on the map depends on the luck of the draw. Sure, you could spend credits on scanners to find that out in advance, but credits and probes cost supplies, and you’re gonna need them for extra lives.

Selecting any tank other than the one with the most armor resulted in near instant death when attacked, and any attempt to speed boost during a mission pretty much erased that advantage once I found out the mechanic depletes your shields. I kept on getting notifications about new weapon types or enhancements I had unlocked, but I’d have to fight my way to a supply depot and hope I had enough credits left to purchase them after spending for additional lives to even get there. After each completed mission, an enemy upgrade bar would fill up as the AI voice tells me my enemies will be stronger in the next mission, followed by fireworks, as if this is something I should be celebrating.

After getting annihilated four missions in (at that point, my average mission count) on the easiest setting with the smallest map size, I came to the realization that the single player mode was unwinnable, and, even if I had persevered enough to get a few more missions deeper, likely unplayable by the time I would get to the enemy base. Part of me was wondering about how bad a player of this game I must be to spend so much time getting nowhere in it.

At this point I decided to give multiplayer a try. Within minutes of hopping into an ‘attack the enemy base’ mission with three other players, game mechanics that alleviate some of the brutality of the single player mode start making themselves known. Apparently being in the vicinity of a teammate’s damaged tank magically repairs the tank, and another teammate informed me over the headset that there is a third weapon mode with unlimited ammunition that results in ammo drops on every successful kill. With four tanks, the ability to heal, and the pressure of ammunition management alleviated, things started to pick up a bit as we pushed through mission after mission. It was here that we all began to see the cracks forming.

Who on the team is picking missions? Some teammates drop out from lack of extra lives, and new ones take their place without any notification. At one point our team lost a mission because one of our teammates got confused and destroyed our own base which we were supposed to protect. Considering how chatty the disembodied female voice is, it’s remarkable that so little necessary information is communicated to players about how to play and what they are doing. Ultimately the online teams I played with got much farther than any of the solo attempts I’d made, but huge swaths of game mechanics still eluded me, as all we could do was struggle to stay alive and slog through one unbalanced battle after another. Ironically, my time with the single player seems to have lent me some level of expertise as I was consistently the highest scoring player after each mission.

Ron, our resident VR nausea sufferer, found the game largely playable until he hit a base assault mission. Going up and down ramps was disorienting, making it difficult to stomach until he was on level ground once again.

In the end, Battlezone VR is a missed opportunity. With so many other PSVR launch titles ending up being little more than glorified tech demos, the balance and design gaffes that cripple the game make the experience that much more disappointing as Battlezone VR’s handling of the technology works really well. I’m convinced a good game could be salvaged from this with a few tweaks and some rebalancing, but for now it’s a brutally frustrating mess doesn’t live up to it’s promise.

Mike Dunn is the old man of Gaming Trend, having cut his teeth on Atari consoles and First Edition Advanced Dungeons & Dragons back in the day. His involvement with Gaming Trend dates back to 2003, and he’s done everything from design and code to writing and managing. Now he has come full circle, with a rekindled passion for tabletop gaming and a recent debut as Dungeon Master (nearly forty years after he purchased the original DMG).
Related Articles: Battlezone VR
Share
Tweet
Share
Submit