Howard Lotor is a private detective in way over his head. What started out as a simple cheating case turns into an investigation on serial murders and cannibalism. When the racoon man tries to drink and forget what he saw, a foxy lady (pun intended) by the name of Renne drags him back in to solve the mystery. You’d think what follows is a detective story about corrupt governments, racism, and class struggles, but Backbone sadly fails to deliver on just about everything presented in its promising prologue.

When I first stumbled upon the free prologue for Backbone back in April of 2019, saying I was looking forward to the game would be an understatement. It was a gorgeous, creative, and intelligent demo where your choices actually mattered and you had multiple routes to reach your goal. The writing was sharp and witty, and Howard was a very likeable protagonist. Most of this remains true through most of the game, so what went wrong? Backbone appears to have been crushed under the weight of its own ambition, so to learn why let’s get into details. 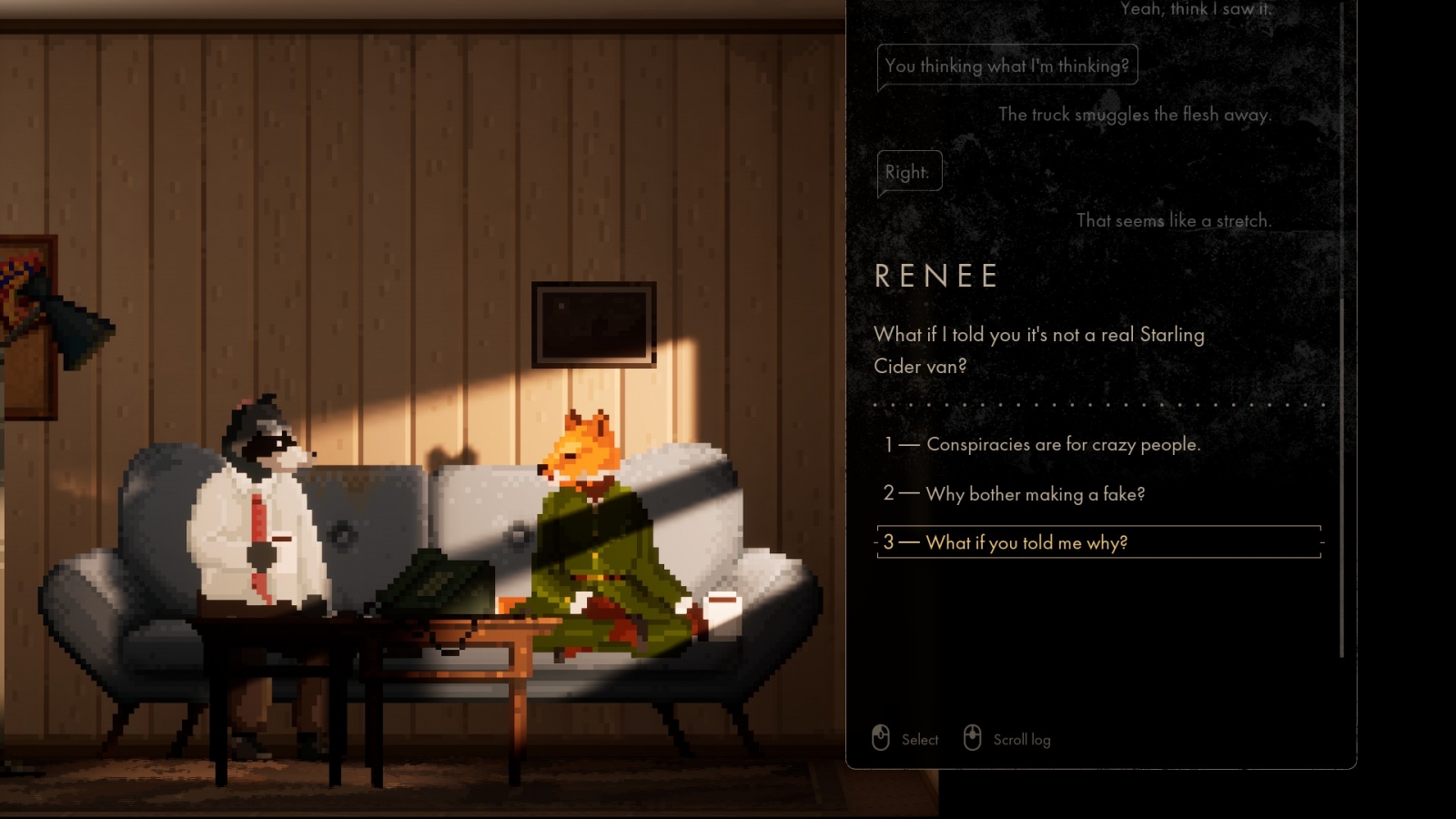 The game is a noir point and click adventure game inspired by classic CRPGs like Baldur’s Gate. You move Howard across the 2D plane with A and D and interact with people or objects by pressing E. You solve puzzles by finding the right objects to use automatically on other objects or saying the right things to the right people. The real meat of Backbone is in the dialogue trees, supposedly people will remember the things you say and choose to reveal certain information based on how you act. However, you can be good cop, bad cop, anything in between or even outside of the binary cop dynamic but it doesn’t actually matter. I played through the game twice for this review, and I noticed the game will almost always just forget your choices. I can’t give specific examples due to spoilers, but essentially every time a character “remembered” something I did earlier in the game they were incorrect.

The story is very engaging and well written, for about two thirds of the game. Just when it feels like the mystery is about to come to a head, the game takes a sharp turn and abandons all the plot threads for something more introspective and horror focused. Now I’m not saying this twist couldn’t have worked, and it’s certainly interesting, but there’s no resolution to this either. From how the game ends, it feels like the setup for a sequel, which I would certainly be interested in for more of the incredible pixel art and writing, but I’m also wary because nothing was resolved here. I’m left in a similar situation like after playing the prologue, which isn’t great in this instance as this is supposed to be a full and complete game. Backbone feels like it simply stops instead of ends, with all of its threads left dangling. 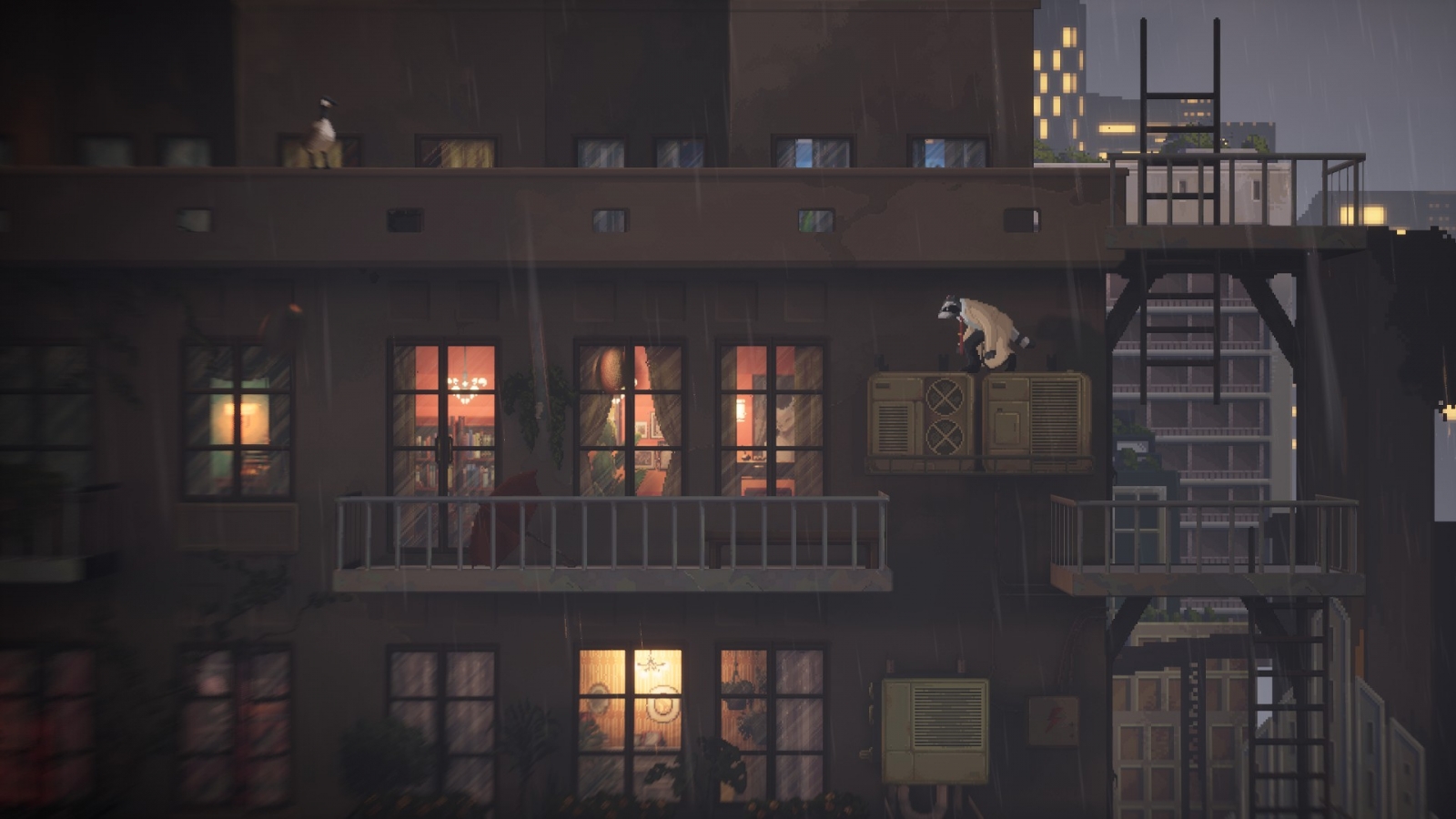 Outside of around three or four total puzzles, there’s not a whole lot to this game. In the end, Backbone feels like a visual novel more than anything. When your choices don’t matter, the story has no satisfying conclusion, and the prologue is really the only instance of multiple routes, where does this leave the game? Well, as I’ve said before the writing is great and pixel art is incredible, so it’s at least nice to look at. Even just playing the game can be frustrating, with tons of glitches like disappearing cursors and softlocks. It’s incredibly disappointing to have to say this, but Backbone is half baked; it doesn’t feel finished. The story and themes go nowhere satisfying, the choices are interesting but don’t matter, and to top it all off you’ll encounter the same glitches over and over every few minutes. This game had so much promise, but in trying to accomplish everything and more it ends up accomplishing nothing.

Backbone bites off far more than it can chew, with a completely out of nowhere twist in the third act, disregard of your choices, and a lack of resolution to any of its plot threads. While the promising story and gorgeous visuals had me hooked initially, the game tries to juggle too many things and ends up dropping all the balls.

David is the kind of person to wear his heart on his sleeve. He can find positives in anything, like this is a person who loved Star Fox Zero to death. You’ll see him playing all kinds of games: AAAs, Indies, game jam games, games of all genres, and writing about them! Here. On this website. When not writing or playing games, you can find David making music, games, or enjoying a good book. David’s favorite games include NieR: Automata, Mother 3, and Gravity Rush.
Related Articles: Backbone, Indies
Share
Tweet
Share
Submit