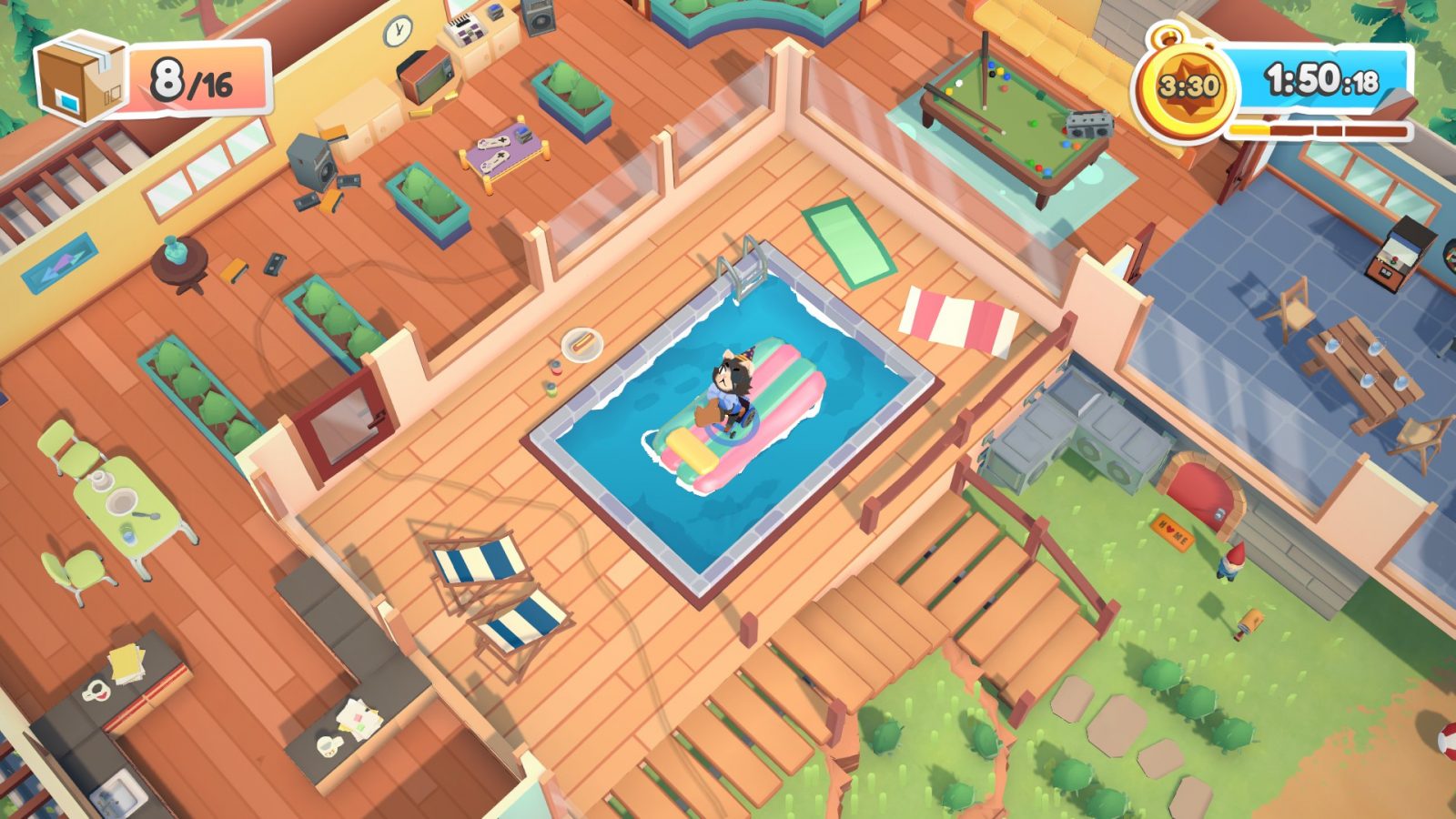 Congratulations! You’ve been accepted to become a Furniture Arrangement and Relocation Technician, or F.A.R.T. for short. After completing our mandatory employee training program, you and your friends will have the opportunity to assist the citizens of Packmore in relocating their furniture. You’ll need to work together to move their stuff into our truck as quickly as possible. Good luck, and remember to lift with your back!

Moving Out is a friendship ruining game. As you play, you’ll be yelling at each other to grab this or that piece of furniture or hold open a door, and I wouldn’t have it any other way. It’s a chaotic and extremely stressful game, but more importantly it’s fun and hilarious. There’s an inherent humor in using the ridiculous physics engine to throw a couch out of a second story window, but the dialogue between levels and the characters you can create add to the ridiculousness. Want to play as a sentient sunny-side-up egg while you throw crates out of a moving plane into a truck below? That’s an oddly specific desire, but Moving Out has you covered. 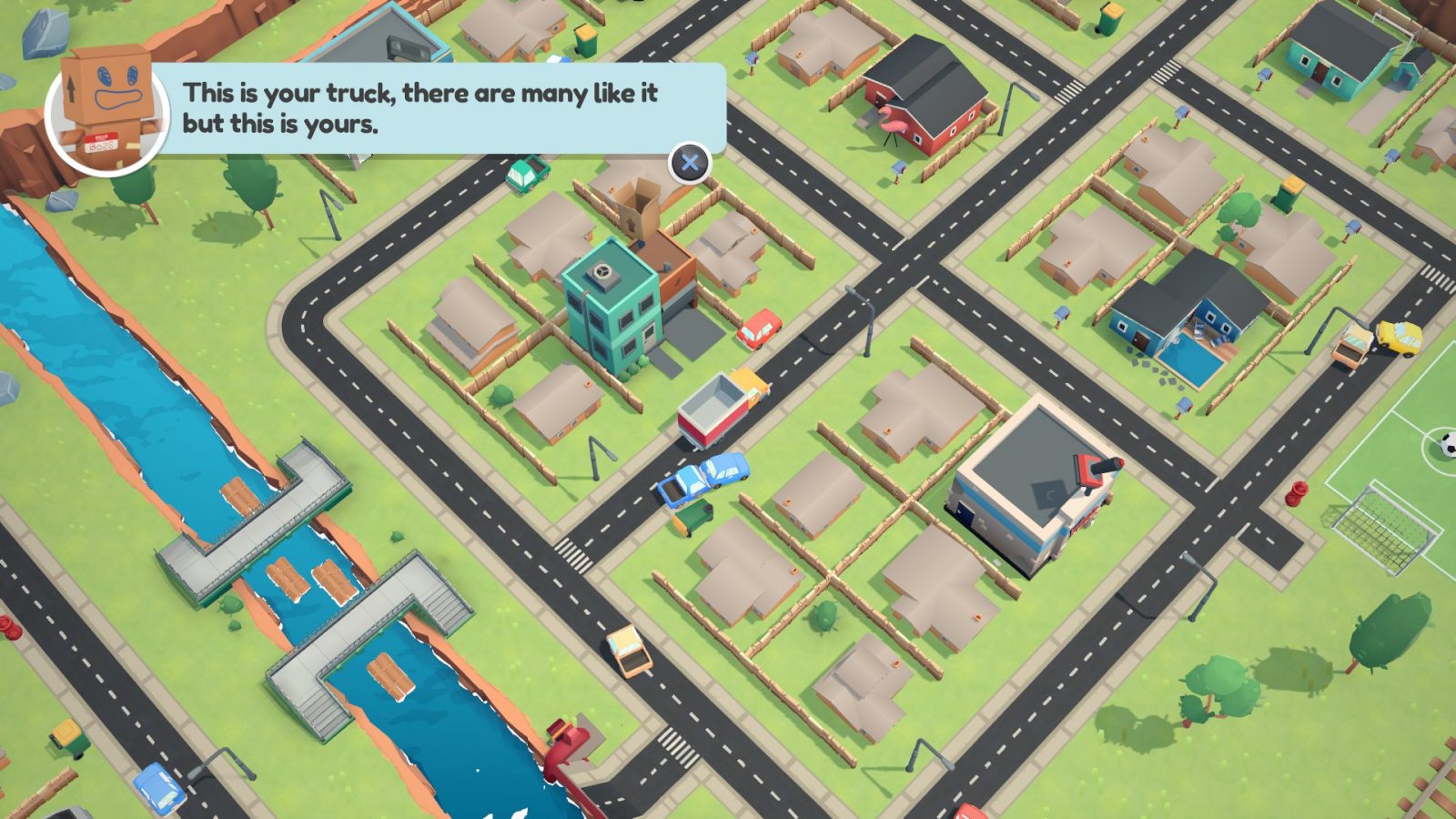 As you progress through the game’s 30 main levels the craziness will only escalate exponentially. You’ll start by moving someone out of a one bedroom house and eventually you’ll be moving a company out of their haunted office or taking furniture from an abandoned flamethrower factory. The pure insanity of the situations and the constant positivity of the dialogue do a lot to mitigate the game’s high difficulty, in multiplayer at least. Each level has a timer and three secret objectives revealed after beating the stage for the first time. Finishing the level within a certain amount of time will net you a gold, silver, or bronze medal and for completing the secret objectives, such as breaking every window, you’ll receive tokens. Accumulating medals and tokens will unlock new stages at the VHS rental store and the arcade (did I mention this game has a very 90’s aesthetic? Because it’s great). It’s clear from this structure and the open design of the world map that you’re supposed to replay these levels over and over, mastering them to get the best times possible or just popping it in when you have friends over and hoping you unlock something because these timed objectives are very strict; if you want that gold you’ll have to be perfect. This is where the Assist Mode difficulty options come in. Upon loading a game, you can enable several options to tweak the difficulty like relaxing those time limits or making big furniture easier for one person to move in multiplayer. For the purposes of this review, I beat the game without using any of these but I would highly recommend using one or more of these options, especially when playing alone. There’s no penalty for doing so, and it can help to ease the tension just a bit to fill that void where your friends should be.

While the game only has local multiplayer, you can still play online with others using Steam’s Remote Play Together feature or PlayStation 4’s Share Play. Myself and Lead Editor Kay Purcell streamed the game using this and I was very surprised at how well the game worked with this feature. I don’t have the best internet speeds, so oftentimes the game looked like a blurry mess, but it was still easy to tell what was going on and where I was thanks to the game’s eye-popping colors and icons above objects you need to move when you press triangle. It was hard to get started at first because neither of us were familiar with Remote Play, but once we did it worked just as well as couch co-op and had about the same amount of panicked yelling. As you stumble your way through each stage in the story mode, you’ll also unlock new characters and customization options. The overall craziness of the game extends to character customization, and it’s a lot of fun just to create a wacky character. For example, I liked to play as Marco the Magical Moving Cat, a kitty with an eyepatch and a wizard hat in a wheelchair, and switched to the eggcellent Sunny later on while Kay preferred to play as a unicorn with a rainbow trail and a pencil for a horn. There are a lot of options to make your character stand out and be as ridiculous as you can imagine. I’d also like to commend the developers for allowing players to create disabled characters as that’s something you almost never see in media and it’s a welcome addition.

Moving Out is a friendship-ending comedy game about moving furniture at any cost. It’s a riot in both its premise and writing with a sizable amount of things to do that’ll keep you coming back for more wacky physics. While it’s best enjoyed with friends, it can still be fun on your own.

David is the kind of person to wear his heart on his sleeve. He can find positives in anything, like this is a person who loved Star Fox Zero to death. You’ll see him playing all kinds of games: AAAs, Indies, game jam games, games of all genres, and writing about them! Here. On this website. When not writing or playing games, you can find David making music, games, or enjoying a good book. David’s favorite games include NieR: Automata, Mother 3, and Gravity Rush.
Related Articles: Indies, Moving Out
Share
Tweet
Share
Submit