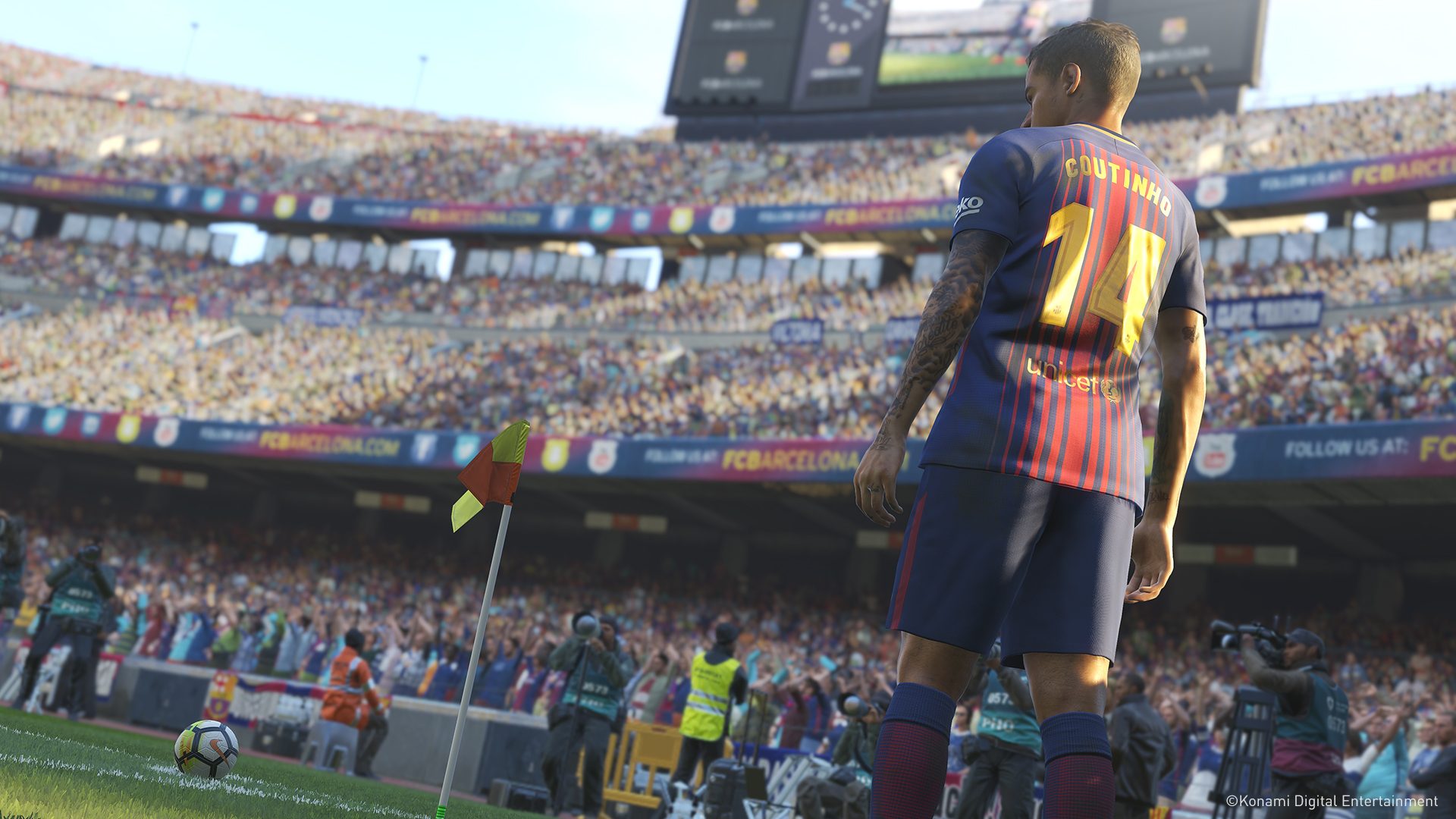 Konami is back with Pro Evolution Soccer with one of the best entries yet in PES 2019. The soccer simulator offers an extremely polished and customizable experience that allows you to tweak and play some of the best soccer around. Hardcore soccer lovers and casual fans alike will find plenty to do to keep themselves entertained for the long haul.

Put simply, PES 2019 is a gorgeous game. The way players move and interact with the field, the ball, and each other is incredibly fluid. The players all look like their real world counterparts and the stadiums are alive with the sound of screaming fans. The fluid motion, screaming audience, and commentary from Peter Drury and Jim Beglin all draw you into the match, though the commentary could use some work. The two don’t really feel like they have a chemistry and the lines don’t really play off each other very well. Definitely not a deal breaker, but could use some more tweaking in order to increase immersion.

PES 2019 looks great and the character models are the main attraction.

While the graphics may good, the gameplay is great. PES 2019 feels like soccer. The ball has weight and moves accordingly, and passing and shooting have never felt better. It is very easy to move the ball around quickly to get into the best scoring position. It’s incredibly satisfying to keep the ball moving, only to suddenly turn one of those passes into a shot attempt. While that is one way to score, it is far from the only. Breaking defenders down with footwork is enjoyable and intuitive. Nothing is quite as exciting as leaving someone in the dust to go for a goal. Of course, working the sides is always a good strategy to mix things up. Crosses and headers are simple to execute, but difficult to master. They take a bit of skill timing, but if used correctly the can lead to an extra goal in a close match. There are a variety of animations for each of these that keeps everything moving smoothly. From lofting the ball high into the net to drilling it into the corners, there is a variety of ways to keep the goalies on their toes. Of course, they are pretty good. Getting around these guys is no simple feat as they play intelligently and react accordingly to your moves. It just makes the goals you score feel at the sweeter.

This great gameplay is found in a variety of different game modes, mainly Career, online versus, and myClub. Career mode is entertaining as you start a character from scratch to fit whatever role you want to play. Taking him through the years as you level up and get better and better can be addicting. Taking things online can be just as fun. I had no issues with the online servers in the matches I played and everything worked as expected. myClub returns and is one of my favorite modes. Collecting players to build the best team you can to go head to head against other players’ teams or against the CPU never gets dull. Especially since you have to worry about how well players fit the system as chemistry is an important part. A great player that isn’t used to playing in your coach’s system is going to need some time to adjust. Little things like chemistry, managing contracts, scouting talent all come together to create an engaging mode that never gets old.

Unfortunately, the one issue that has plague PES remains: Konami just can’t get licenses. While PES 2019 has more licensed teams than ever before, it still doesn’t compare to EA and the FIFA series. While this is a true shame, the core gameplay makes up for a lot of it. Still, it remains one of the few blights on the series that continues to hold it back. It is even more noticeable since the licensed teams Konami do have feel so much more polished. They have team specific chants that really help the immersion compared to the more generic crowd noises the other teams get.

PES 2019 may lack the fancy presentation of FIFA, but when it comes to gameplay, PES 2019 can more than hold its own. Smooth gameplay, a variety of animations, and interesting game modes take the sting off of the lack of licensed teams. FIFA may wear the crown, but PES is a worthy rival.

PES 2019 may lack the fancy presentation of FIFA, but when it comes to gameplay, PES 2019 can more than hold its own. Smooth gameplay, a variety of animations, and interesting game modes take the sting off of the lack of licensed teams. FIFA may wear the crown, but PES is a worthy rival.

Austin Fern has been playing video games his entire life. The first console he truly fell in love with is the PlayStation 2 with Sly Cooper, God of War, and many others really leaving an impression. He enjoys all genres of games from FarCry 5 to Danganronpa and everything in between.
Related Articles: Pro Evolution Soccer 2019
Share
Tweet
Share
Submit