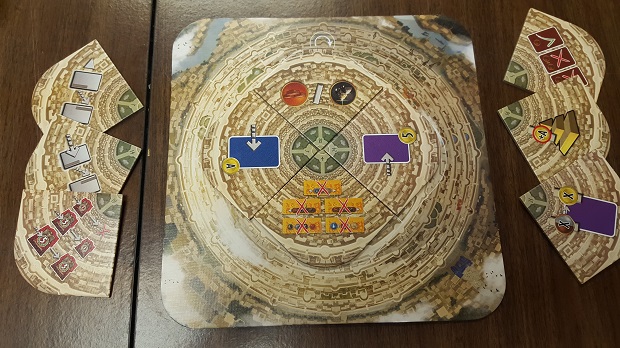 Expansions are a funny thing. They can range from being absolutely necessary to enjoy a game (Ticket to Ride USA 1910), to completely unnecessary (nobody needs another Carcassonne expansion), to frivolous yet somehow totally necessary (Agricola Goodies Expansion). Somewhere, there’s a sweet spot where an expansion adds a neat wrinkle or new twist to an already good game without adding too much complexity or clutter. By including two expansions in the box, 7 Wonders: Babel manages to be both necessary and frivolous at the same time.

The original 7 Wonders is a fantastic game on its own. The artwork is great, it’s fast, it’s easy to learn, it plays up to seven people, and there’s multiple paths to victory. It also has some of the best artwork you’re going to find in a game. For those of you who may be unfamiliar, 7 Wonders is a card-based game where players play a card from a hand and pass the remaining cards to the player next to them. Different types of cards do different things. Some help you fight, some give victory points, some provide resources, etc. Trust me, it’s a fantastic game. My gaming group and I have played 7 Wonders dozens of times. It’s our go-to game when there’s six or seven players at the table. But when you play a game so many times, things naturally begin to get a bit stale after a while.

7 Wonders has been expanded several times over the years. The expansions have mostly been pretty good and have helped breathe some new life into the original game. Now we have 7 Wonders: Babel, the newest expansion in the lineup. Babel is actually two expansions in one: Tower of Babel and Great Projects of Babel. These can be played separately or in any combination with the other expansions.

Tower of Babel consists of a board representing the ubiquitous tower and 24 tiles. Three tiles are given to each player. Each player chooses one tile and passes the other two to the left. Players then take the two tiles they receive from the player on their right, choose one, and pass the remaining tile to the next player, who keeps it. During the game, players are given the option of playing a tile instead of playing a card. If they choose to play a tile, the player places it on the Babel board. Each played tile has an effect that creates a new rule. This rule affects all players and remains in effect until the tile is covered by a different tile. Some rules help all players, such as giving a coin bonus for playing certain types of cards, and some rules hurt all players, such as making all double or mixed resource cards unusable. As an incentive to play tiles, players are rewarded for the number of tiles they played at end of game scoring.

This expansion is as simple as it seems. The tiles add one extra option for players without getting in the way of the rest of the gameplay. On the surface, it’s just a simple expansion that adds a little bit more depth to the game. The problem is that this whole endeavor seems unnecessary. In order to play a tile, players must sacrifice playing a card. The reward for playing a card is usually superior to whatever happens when a tile is played. There just isn’t enough incentive to introduce an arbitrary rule to the game when playing a card is so much more helpful. Playing with this expansion reminds me of playing a drinking game where players are just tossing random rules around. In fact, incorporating drinking into this expansion is exactly what it needs. If we could work some sort of drinking mechanic into playing tiles, then we might be onto something. But as it is, there’s really no compelling reason to play tiles, leaving this expansion squarely in the Unnecessary Unless You’re Drinking category.

Luckily, the other expansion included in the box, Great Projects, is considerably better than Tower of Babel. Great Projects consists of 15 giant cards that represent Great Projects. These cards are awesome for the artwork alone. The art has always been a giant selling point for 7 Wonders, and here it gets to shine in  an oversized format. Gameplay works just like in the base game, except that players now have the option of supporting the Great Project when they play a card. At the end of the age, if a Great Project has enough support, it rewards those who supported it. If if has not received enough support, players who failed to support the Great Project are penalized. This is such a simple mechanic, but it adds a whole new dimension to the game. Players must now weigh the benefits and penalties of the Great Project and decide if they want to spend resources on supporting it. The rewards and penalties are substantial enough that players can’t simply ignore the Great Project like they can ignore the drinking tiles of the Tower of Babel expansion. There’s simply one more thing to think about, which is a very welcome development when you’ve played a game dozens of times. Add to this the fact that the giant cards have the same beautiful artwork that we’ve come to expect from 7 Wonders, and we’ve got a winner here.

Because the Babel expansion contains Great Projects, which I consider to be the second best 7 Wonders expansion (behind Leaders), I have to consider Babel an essential expansion for 7 Wonders fans. It’s too bad that the set also contains some dead weight in Tower of Babel, causing the set to be priced higher. And $43 for an expansion is a steep price. But let’s face it: fans of 7 Wonders are going to buy this set if there’s anything at all to recommend it. I’m happy to report that there are indeed enough good things about this expansion to recommend it to fans.

This one is tricky. The Great Projects expansion is great. It’s an absolutely essential expansion. But Tower of Babel is pretty unnecessary. The tiles simply don’t benefit players enough to play them very often. Unfortunately, if you want one expansion, you gotta pony up for both. If there was a set with just Great Projects that cost $25, I’d give it a 90.