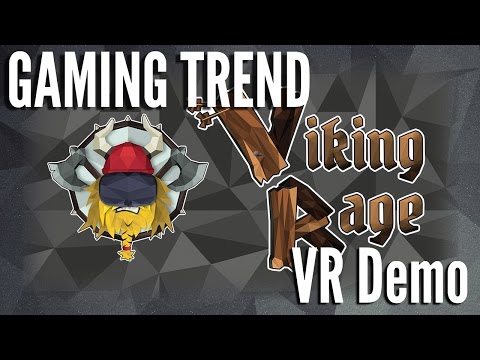 Tower defense and wave-based games aren’t really my go-to, even on mobile devices, but there’s something about VR that makes them insanely fun. Maybe it’s the way virtual reality makes everything larger than life, or just how novel the whole platform is, but even something as mundane as standing in place and whipping arrows and axes at incoming enemies becomes something entirely satisfying.

I’ve recently gotten my hands on Viking Rage, the freshman effort from German developer N-Gon Entertainment. The storyline states that beasties have marched on various Viking strongholds, and it’s up to you to use axes, bombs, and your trusty bow and arrows to take them down before they breach the gates of your fortress. It’s a simple premise for a simple game.

As a gruff voice gives you the basic instructions, you’ll whip axes at giant stuffed dummies to teach you distances and the teleportation movement mechanic. With that established, you jump into the first of five levels of escalating difficulty.

There are (currently) two weapons available in Viking Rage – axes that you can lob in pairs, or a bow and a limited number of arrows. You’ll throw them in an arc towards the enemy, and generally speaking as long as the projectile strikes the enemy in some way it’ll take them out. Larger enemies might require more axes, and some have armor so you’ll have to be more specific in your targeting. Kobolds will ride wolves, so you’ll have to knock them off and then take out their mounts.

As you slaughter kobolds, wolves, giants, and ogres, you’ll fill up your Rage meter. When this meter is full, a target will appear nearby. Tagging that target with an axe will unleash your Viking Rage, making almost every thrown axe an instant kill. Think of it like Quad Damage from the old Quake games.

There are a few goodies to discover in Viking Rage that the tutorial doesn’t supply, however. Dipping your arrows into nearby braziers will light them on fire for additional damage when those arrows connect with a target, and there’s also a magical pot that gives you a single-use ice arrow that freezes a target for a limited time. You also have a basket of bombs that will help you push back your foes, offering up splash and concussive damage to enemy lines if you can lob them in the right places. Latter levels offer up hanging icicles to allow you to spear your targets. There are also traps like secured battering rams that can help hold environmental chokepoints. You can even shoot your axe via the bow, with exactly the sub-standard results you might expect – stick to arrows. It’s a simple game, but there’s enough here to keep you busy.

As you progress through the levels, you’ll eventually face a behemoth boss that will have no problem crushing your gate should he get close enough. I won’t ruin the surprise, but it’ll require speed, position changes, and a whole lot of axe lobbing to stop this creature in its tracks. It’s a real highlight, and a great use of the technology that Viking Rage displays.

With the first patch, N-Gon has added four minigames to the mix. Between levels, when you pop back to the selection lobby, you’ll find an opportunity to play golf with a giant club (the “golf balls” are actually little wolves that ragdoll towards circular targets for points). It’s more like chipping than driving, but it’s a fun distraction. The second minigame I found (they aren’t obvious in the hub) was a timed game where you select a bow, axes, or crossbows and try to take out as many targets as you can. Each target strike gives you an extra bit of time to continue to drop stuffed dummies for fun. I’m not sure what the other two are, or where they are hidden, but if these two are any indication, they’ll be entertaining.

Unfortunately, there are some technical hitches in Viking Rage. While the tutorial and first level are completely stutter-free, the second level is jittery when you pan your vision across the field. Everything remains stable and with a high framerate when you keep your head stationary, regardless of how many enemies are on screen, but turning your head can be a choppy event. The third level, on the other hand, started out a little rough, but smoothed out after a minute. The fourth level had zero issues, but the fifth stuttered in the beginning and then mostly smoothed out. It seems there is a bit of tuning to be done.

Graphically, Viking Rage is fairly basic. The trees are blocky polygons, as are the environments. Creatures, and your own weapons, are decently detailed. What surprised me was just how large the levels are. The second level, as an example, has sheer cliffs, reinforced platforms, and outcroppings from which to unleash your attacks. There’s quite a bit of verticality, which is always fun for VR. Leaning over the edge, shooting pesky wyverns, and lobbing the occasional bomb keeps you busy enough to not notice the simple look and feel of the game.

Viking Rage takes the simple concept of tower defense and brings it to VR. Enemy variety, traps and secrets, and a few boss fights make it more than the sum of its parts. Minigames are icing on that cake. There are some technical hurdles, but at its core Viking Rage is a fun take on an established genre.

Ron Burke is the Editor in Chief for Gaming Trend. Currently living in Fort Worth, Texas, Ron is an old-school gamer who enjoys CRPGs, action/adventure, platformers, music games, and has recently gotten into tabletop gaming. Ron is also a fourth degree black belt, with a Master's rank in Matsumura Seito Shōrin-ryū, Moo Duk Kwan Tang Soo Do, Universal Tang Soo Do Alliance, and International Tang Soo Do Federation. He also holds ranks in several other styles in his search to be a well-rounded fighter. Ron has been married to Gaming Trend Editor, Laura Burke, for 21 years. They have three dogs - Pazuzu (Irish Terrier), Atë, and Calliope (both Australian Kelpie/Pit Bull mixes).
Related Articles: Viking Rage
Share
Tweet
Share
Submit