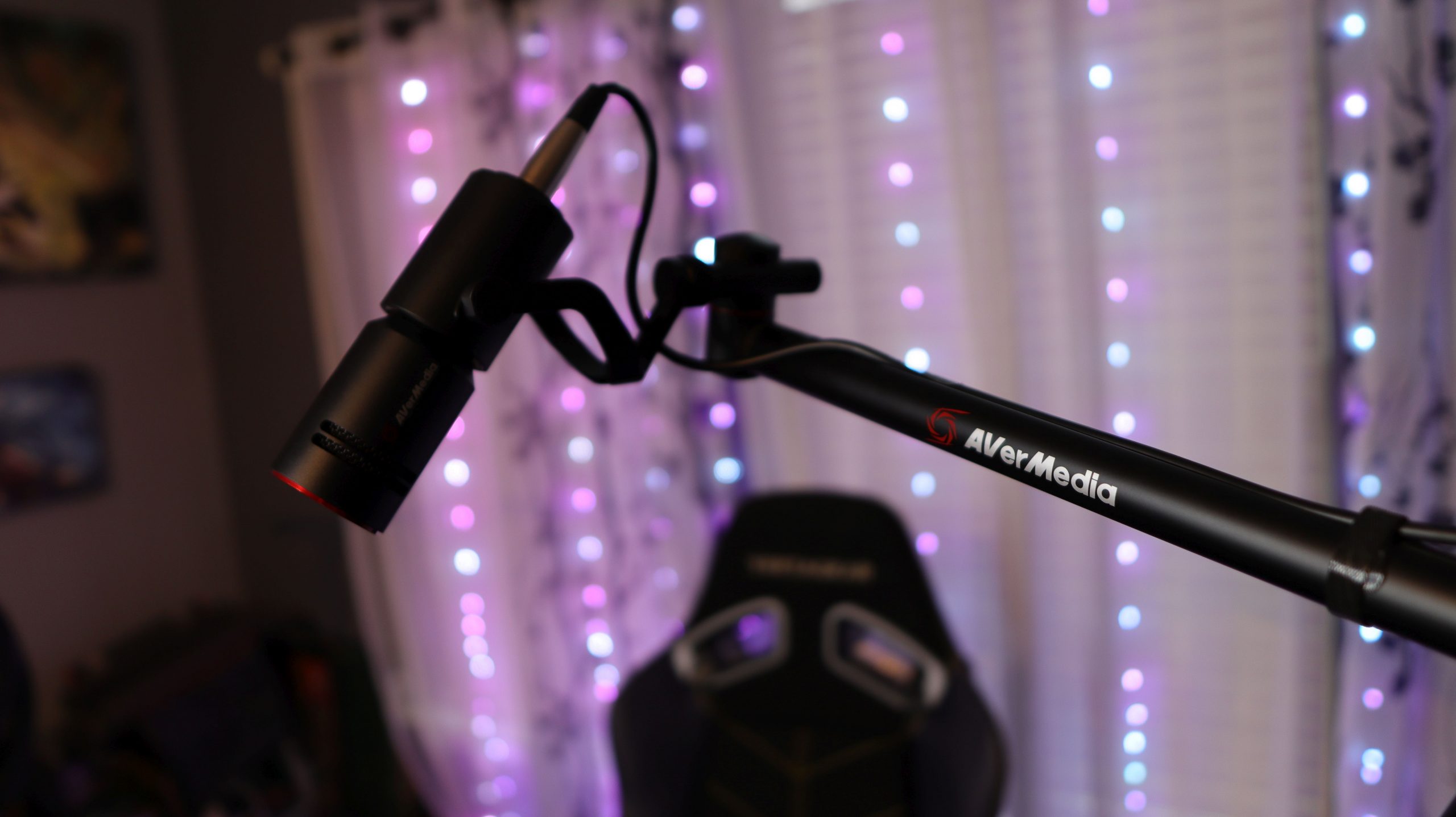 My wife bought me a wonderful piece of furniture as a celebration of my first executive management position. This desk once belonged to a local judge over 100 years ago. Needless to say, it doesn’t have cable routing of any kind. I purchased a heavy weighted boom arm for my microphone, which sits on my glass desktop, holding it securely in place. Until it didn’t. I turned the boom arm, overbalancing the counterweight and sending it careening towards the glass. I scrambled to catch the microphone, deflecting it from striking the fragile surface, dumping my tea over papers on my desk, ripping my pop filter, and instead sending the whole damned thing to the floor. I need a better boom arm as that could have been absolutely disastrous. A quick trip to Amazon and I soon had a spring-loaded boom arm that couldn’t even handle the weight of the cords. We’ve been checking out AverMedia’s streaming products for a while now, so it seemed like their newest streaming-focused LiveStreamer Arm could be a great choice. Let’s carefully clamp it to the desk and find out if it’s worth the $129 asking price. 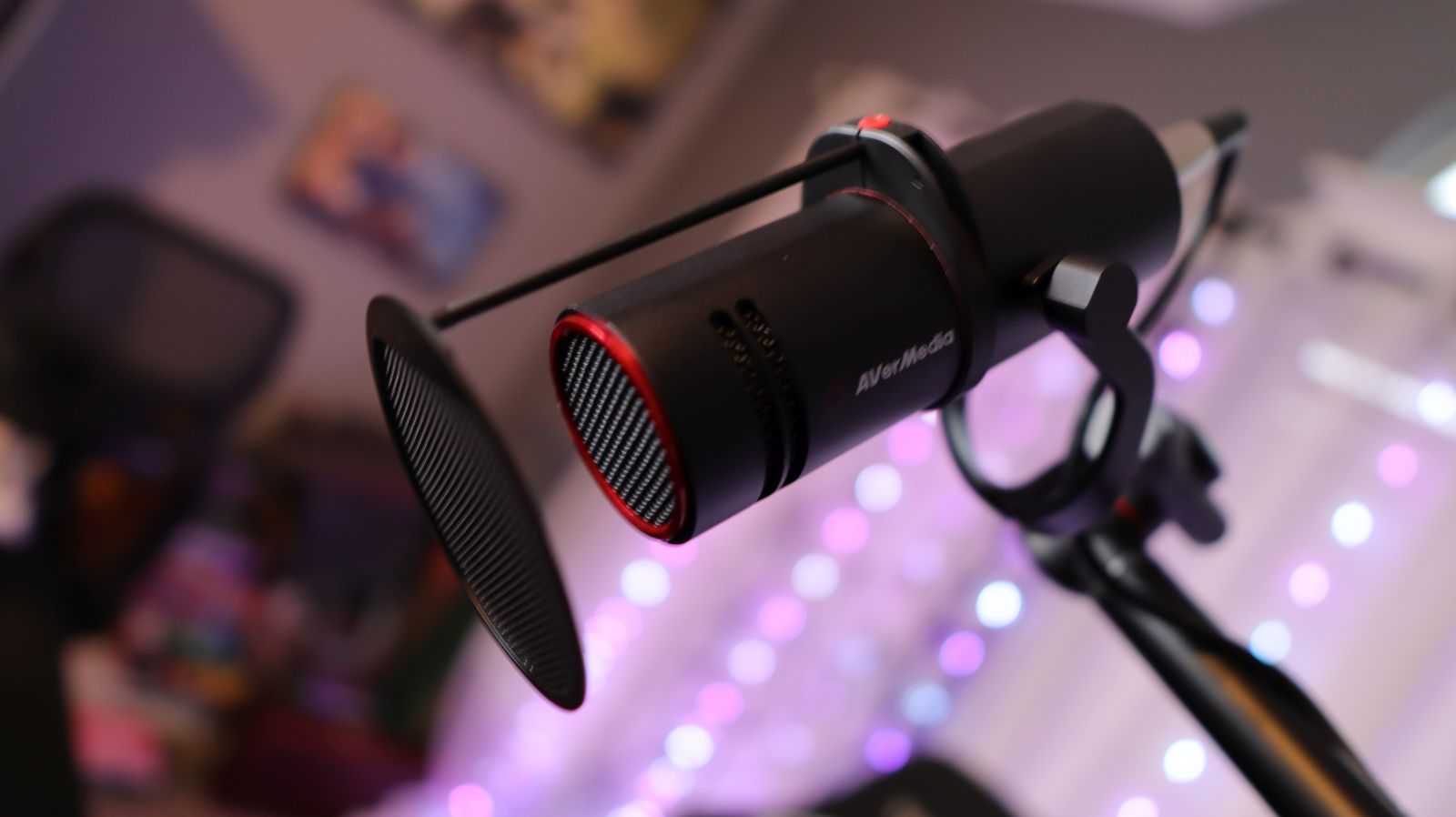 The proprietary pop screen is easily installed and easier to clean.

The first thing I noticed when unboxing this device was that it isn’t the same mass of aluminum and springs that I see in every other boom arm on the market. Instead, this arm is built out of solid aluminum tubing, complete with cable routes, an integrated mounting system, and more.

The obvious use for this LiveStreamer Arm is…well, you guessed it, livestreaming. There are plenty of mics out there that’ll do the job, but frankly most of the boom arms to hold them are garbage. Most of them are too short to get around my monitor setup, or once they are in place you dare not move them lest they slump and crash your mic into your desk. Clearly the AverMedia team is well aware of both of these problems as this arm has neither. In fact, it has a magic trick up its sleeve that I’ve never seen anywhere else. 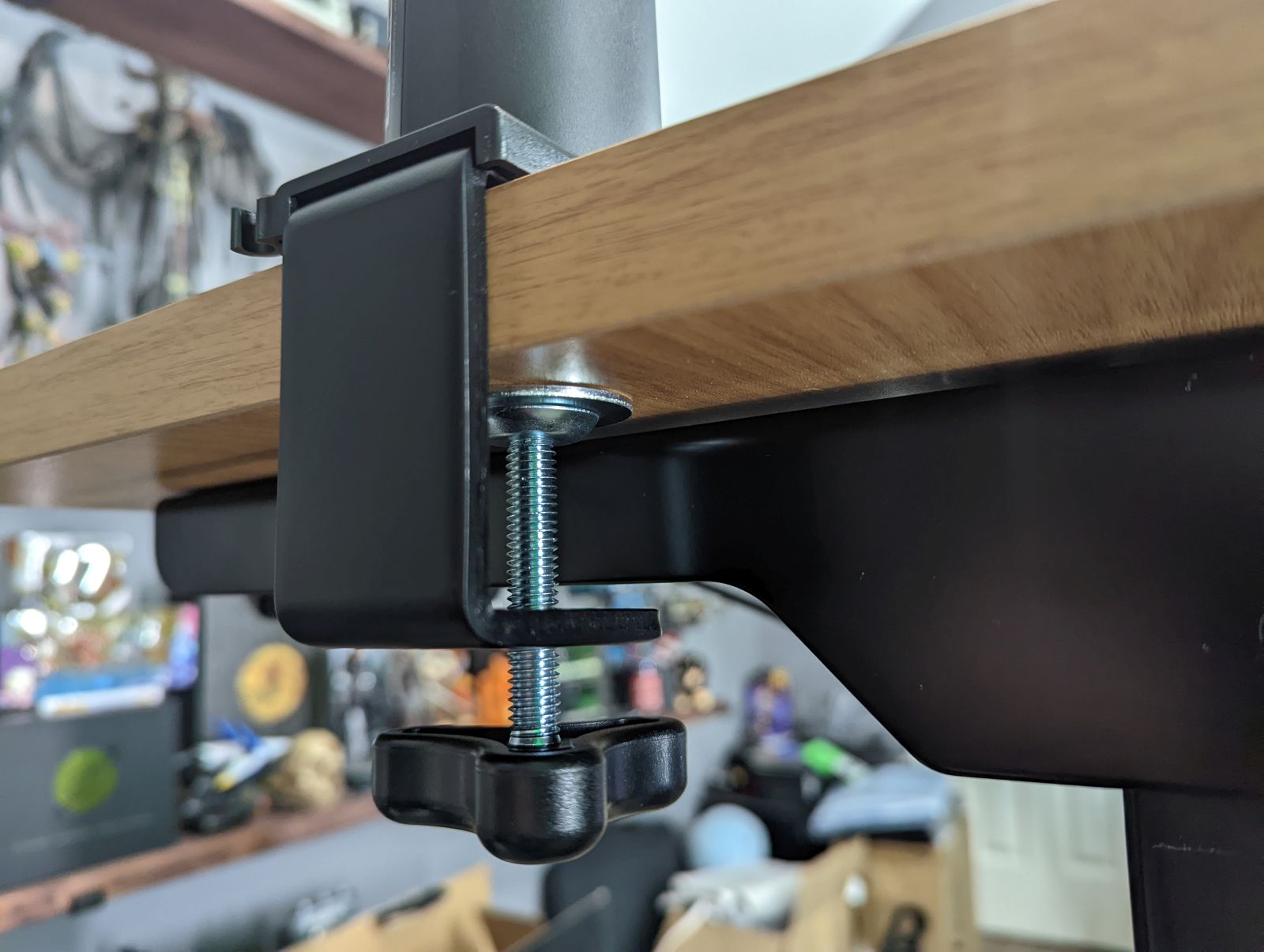 Easily mounted on just about any surface.

The LiveStreamer Arm has two modes. It can be used as a boom arm, standing tall and then reaching over the top of your devices. What’s different is that it can also instantly switch to a low profile, pointing the microphone upwards. In fact, it has seven rotational axes, allowing it to easily collapse out of the way when you aren’t using it, and is easily pulled back into position when you are ready. 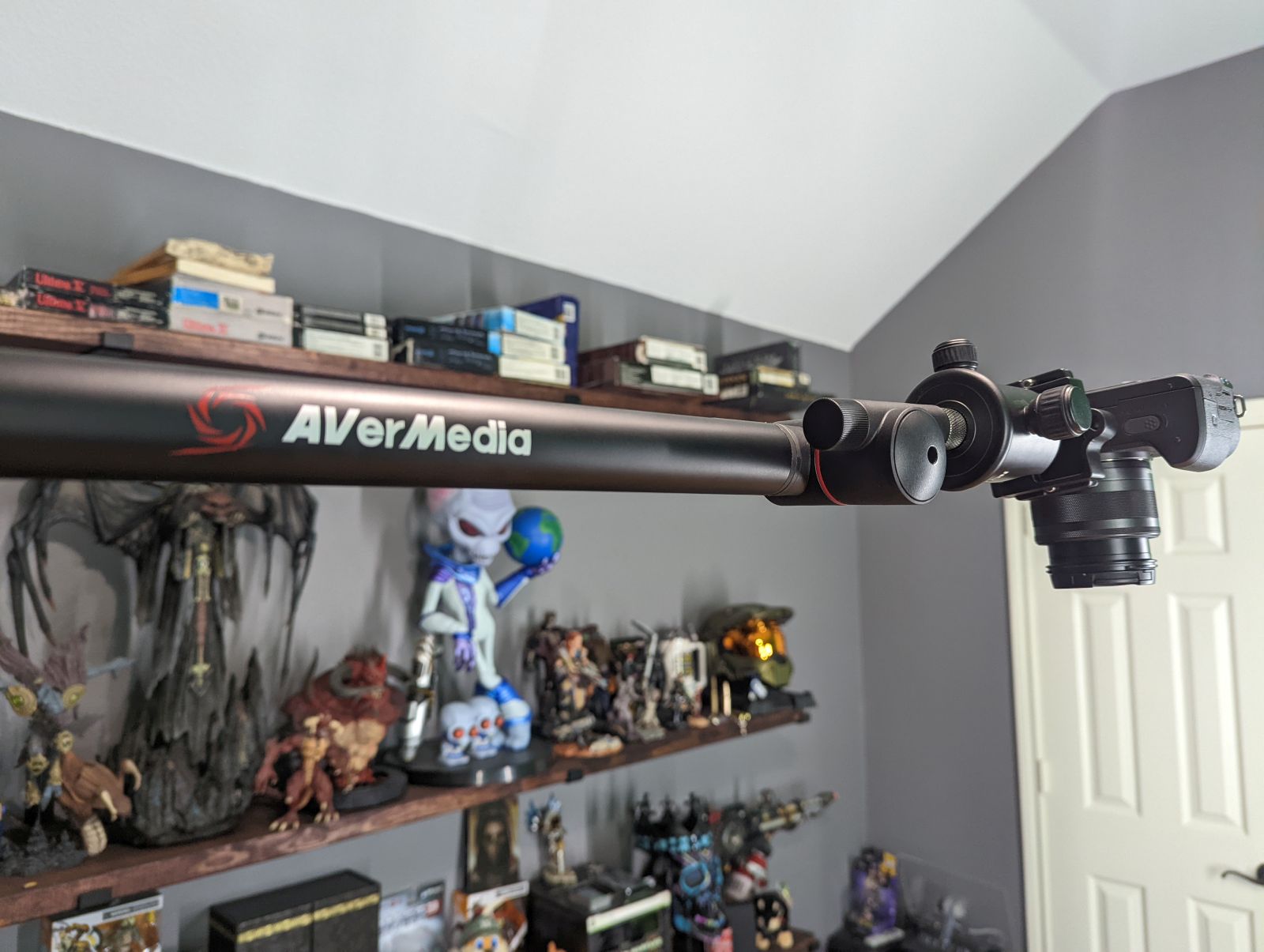 Given that the LiveStreamer arm can handle the full 3.9 pounds of weight in any orientation, I found an entirely unexpected use for it – top down photography. Unboxing videos, showcasing builds like our Iron Man Fanhome assembly, and any other shots that need an overhead view — just to name a few. I’ve got a special (and very expensive) boom arm tripod that is sturdy and reliable, but also very cumbersome to manipulate. The AverMedia LiveStreamer makes taking those overhead shots a breeze. The LiveStreamer Arm has a 5/8″ thread on it to attach microphones like the AverMedia LiveStreamer Mic 330, but using a 5/8″ Female to 3/8″ adapter I was able to connect my quick-release camera mount to it. Including the lens, the camera clocks in far less than the 3.9 pound max carry weight, locking in place with a simple included hex key Allen wrench. It even has a little clip to hold the Allen wrench so you have it handy. 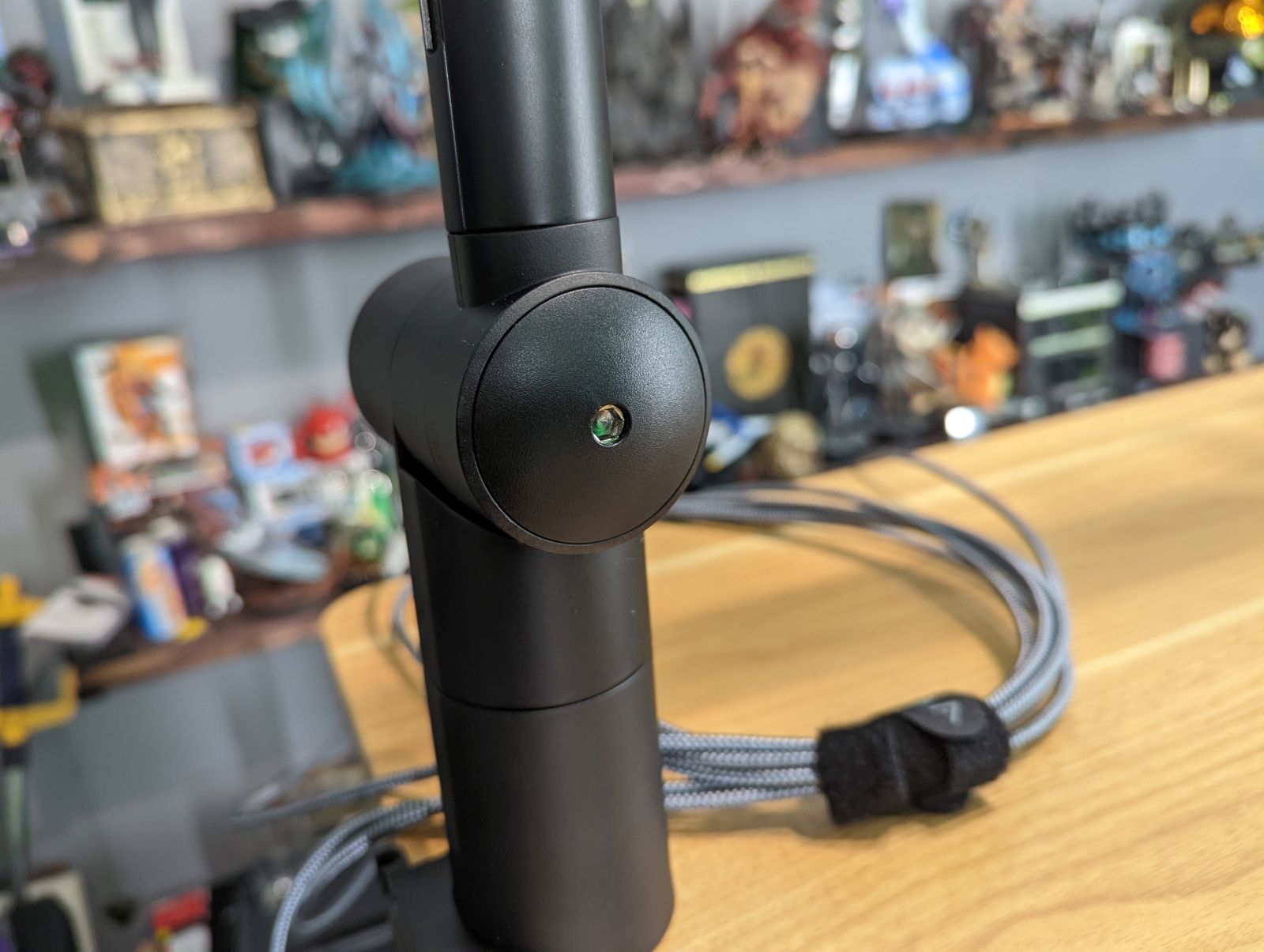 Locks in place with an included Allen wrench

I wanted to really push this system to its full potential, so I loaded up 4 pounds of solid steel on top of the boom arm when extended at 90 degrees. I took a measurement from the arm to the table, turned off the lights, and checked back three days later. Despite exceeding the maximum size, the arm hadn’t moved a millimeter. Whether you are putting a webcam, camera, lighting rig, or whatever else you need for your setup, this arm is going to stay put and keep it safe.

I want to return to the adapter portion; it has a trick that makes it easy to see that this isn’t just an engineered solution, but clearly one that’s been tested in the real world. At the end of the boom arm is a knob that turns the other end of the adapter. What this means is that you aren’t spinning the microphone or camera mount, but instead you are turning this knob to lock your device in place. No more coiling a cable cobra around your boom arm! 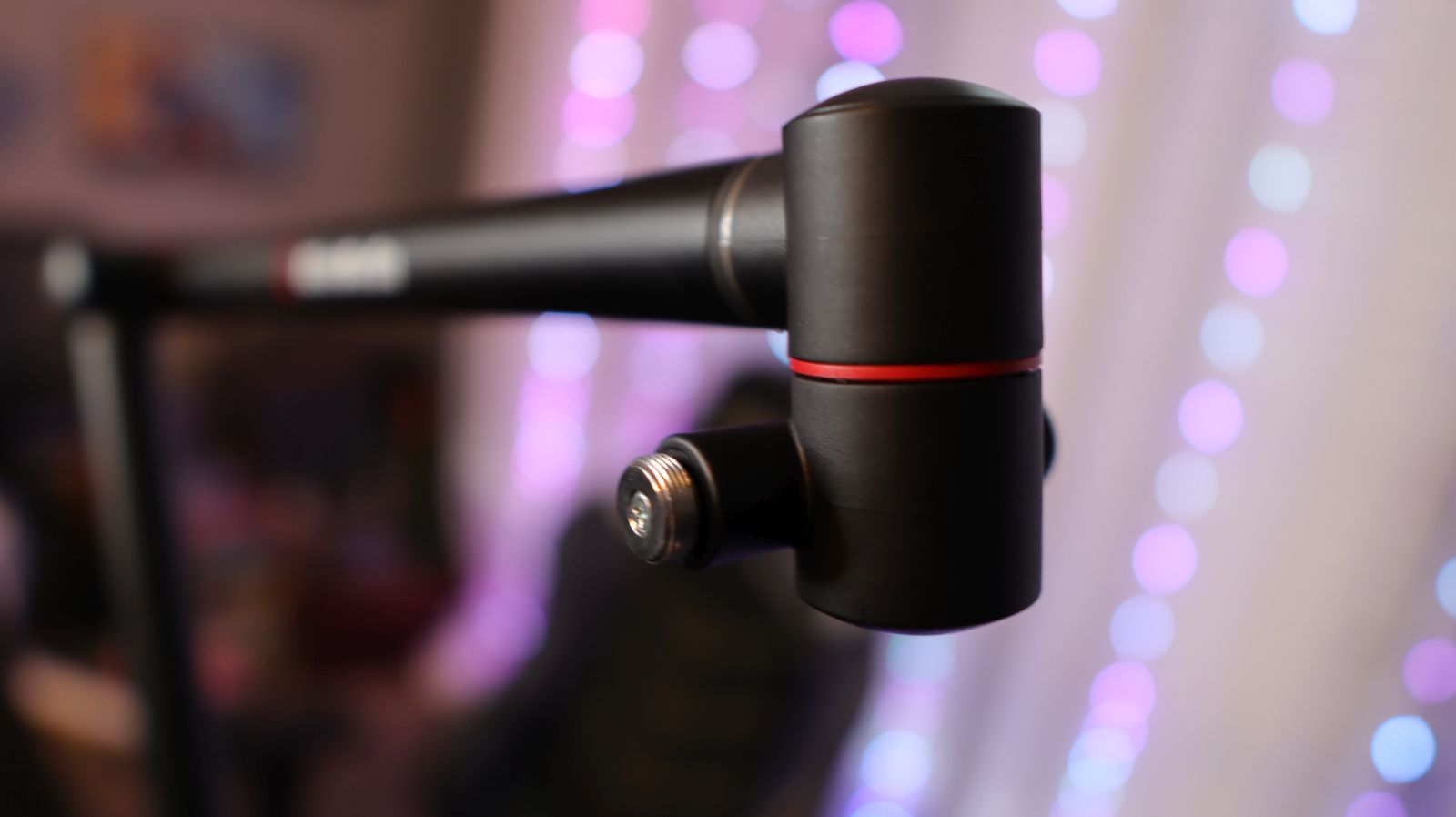 Running the length of both segments of the LiveStreamer arm is a cable channel. This allows you to organize your cables and keep them organized, whether that’s an XLR, USB, or a power cord for your favorite camera. Because it’s a channel, there’s no chance of it being pinched in a spring or boom arm (something I’ve unfortunately had happen with an external power supply for my Canon M50), keeping your equipment safe, even when you move the boom in and out. These also have covers to keep your cables from moving, ensuring they stay out of your shot.

You can get the LiveStreamer Arm and Live Streamer Pop Filter as part of a package, so that’s precisely what I did. This particular pop filter is built specifically for AverMedia’s own Live Streamer Mic 330 – a microphone setup that we did an extensive piece on just recently as you can see below, or read right here. I’ve always dreaded putting the equivalent of a plastic ring with a nylon sock over it in front of my expensive microphone, so the metal mesh design is a welcome one. Better still, as the whole thing easily disassembles for cleaning – something I can’t say about the nylon equivalents. Best of all, they have priced it at just a $10 premium over the nylon mesh versions at just $29.99 – a solid value, if you have a compatible mic.

Truthfully, the only thing I can knock this combination for is that the pop mic is meant to be proprietary. Given that the mic slips like a collar onto the tube body of the microphone, there’s a good chance your microphone will be incompatible. It’s a shame, too, as it’s simple and effective. When placed correctly on the microphone, it’s placed at the perfect position to ensure you stay at the optimum distance. I don’t blame AverMedia for making a pop mic for their own gear, but it does mean there’s a very real chance it won’t work on your next microphone.

The AverMedia LiveStreamer Arm is a magnificently engineered device that innovates on the tired boom arms that have been shakily holding up our most critical equipment. With stability and a sleek presentation, this arm, and the steel-mesh pop screen, will look as great on camera as you’ll sound.

Ron Burke is the Editor in Chief for Gaming Trend. Currently living in Fort Worth, Texas, Ron is an old-school gamer who enjoys CRPGs, action/adventure, platformers, music games, and has recently gotten into tabletop gaming. Ron is also a fourth degree black belt, with a Master's rank in Matsumura Seito Shōrin-ryū, Moo Duk Kwan Tang Soo Do, Universal Tang Soo Do Alliance, and International Tang Soo Do Federation. He also holds ranks in several other styles in his search to be a well-rounded fighter. Ron has been married to Gaming Trend Editor, Laura Burke, for 21 years. They have three dogs - Pazuzu (Irish Terrier), Atë, and Calliope (both Australian Kelpie/Pit Bull mixes).
Related Articles: AverMedia LiveStreamer Arm, Hardware
Share
Tweet
Share
Submit