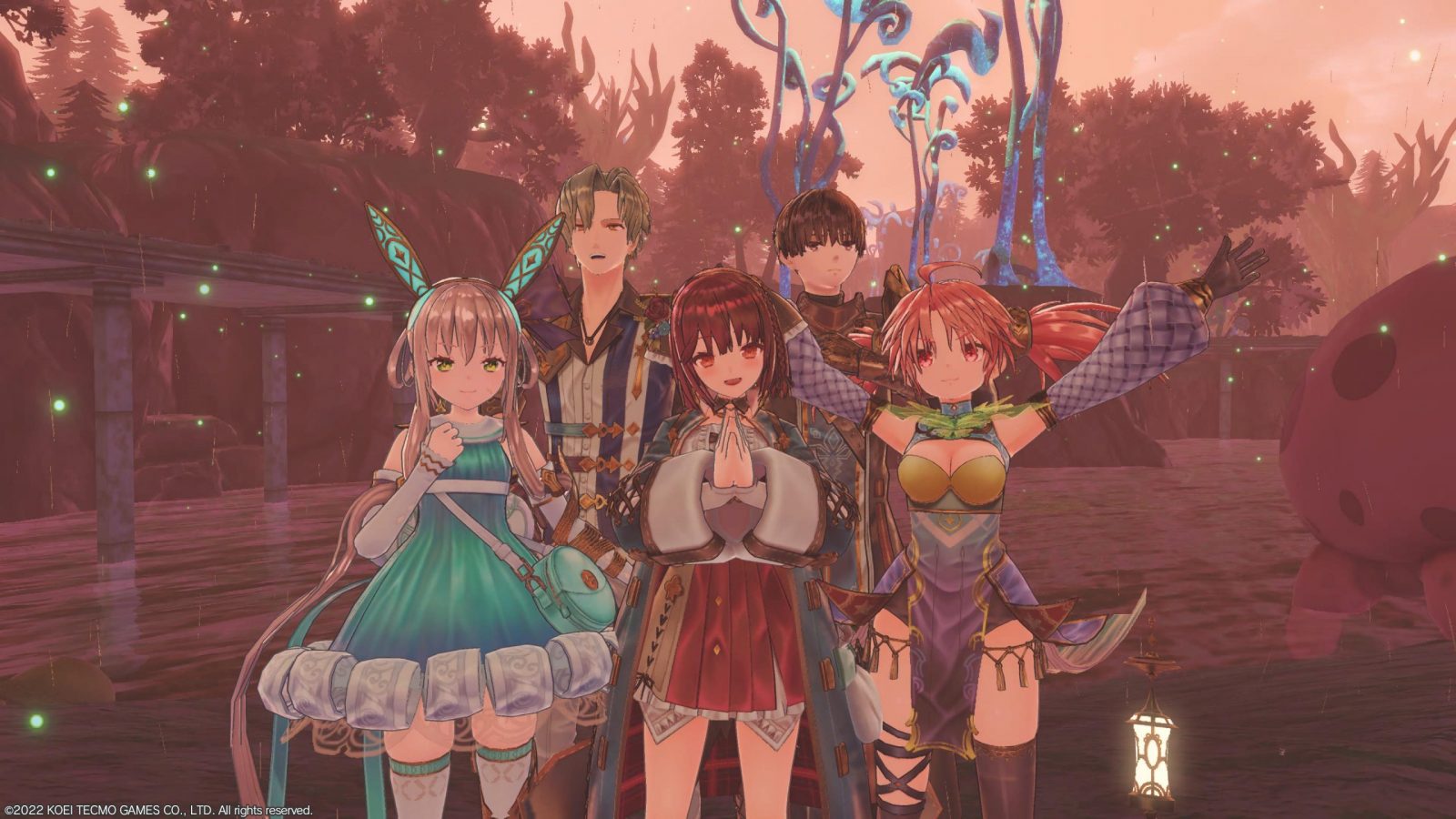 After setting out to become certified Alchemists, Sophie and Platcha find themselves in a strange forest. Before an even stranger tree, a portal appears before the two and sucks them in. Now alone in a mysterious dream world, Sophie makes it her mission to find Platcha and a way back home, making new friends along the way.

I don’t have much experience with the Atelier series, having only played a bit of one on the DS, but all I’ve ever heard about it are good things. It’s no wonder then that the franchise is celebrating its 25th anniversary with Atelier Sophie 2: The Alchemist of the Mysterious Dream. For those not in the know, the Atelier games are turn-based RPGs, yes, but place a large focus on using materials you collect throughout the world to create and improve items using Alchemy. The gameplay loop of going out to collect ingredients, returning home to make new tools or weapons to aid in your exploration, then heading back out to do it all again is instantly engaging and immensely satisfying. While I find the story progression can be a bit cumbersome, at its core is a formula (pun intended) that’s easy to see how it is still going strong after 25 years.

After waking up alone in the dream world, called Erde Wiege, she quickly finds a home with the local town’s resident alchemist… Platcha? Because Erde Wiege is apart from the real world, its residents come from all over time and space, so this Platcha is from before Sophie met her in the first game, and Sophie’s Platcha is still missing out there somewhere. Sounds confusing? Actually no, it’s not that bad. Anyway, before you can start making stuff, you have to gather some components by cutting grass, mining, whacking objects with your staff, and of course fighting monsters.

Up to three party members can be active in combat at once, and each have their own strengths and weaknesses. Sophie is a skilled magic user and can cast buffs on the party, while Platcha and Alette can dabble in some magic but focus on physical attacks. Turn order is displayed at the bottom of the screen, and characters are able to attack, defend, use items or skills, or run away on their turn. Abilities include spells or special attacks that use MP and can target one or more combatants. Along with normal attacks, you’ll be using these pretty frequently to get through most battles. Thankfully, you can speed up battles up to 2x by pressing in the left stick if the repeated animations become annoying. As you fight, you’ll build up a gauge in the bottom left corner next to the commands. Using a segment of the gauge allows you to swap out a party member from the reserves without using a turn. When selecting an action, you can press L1 to attack in tandem with a reserve member, each using an ability at a reduced cost. This allows you to put pressure on defenseless foes, especially once shields become more common and harder to wear down. Conversely, when an active character is about to be attacked, you can swap them out to have the incoming member adopt a defensive stance and take reduced damage. You have to constantly manage all of your party members to be effective in battle, which keeps things fun and active in what’s a relatively easy game. 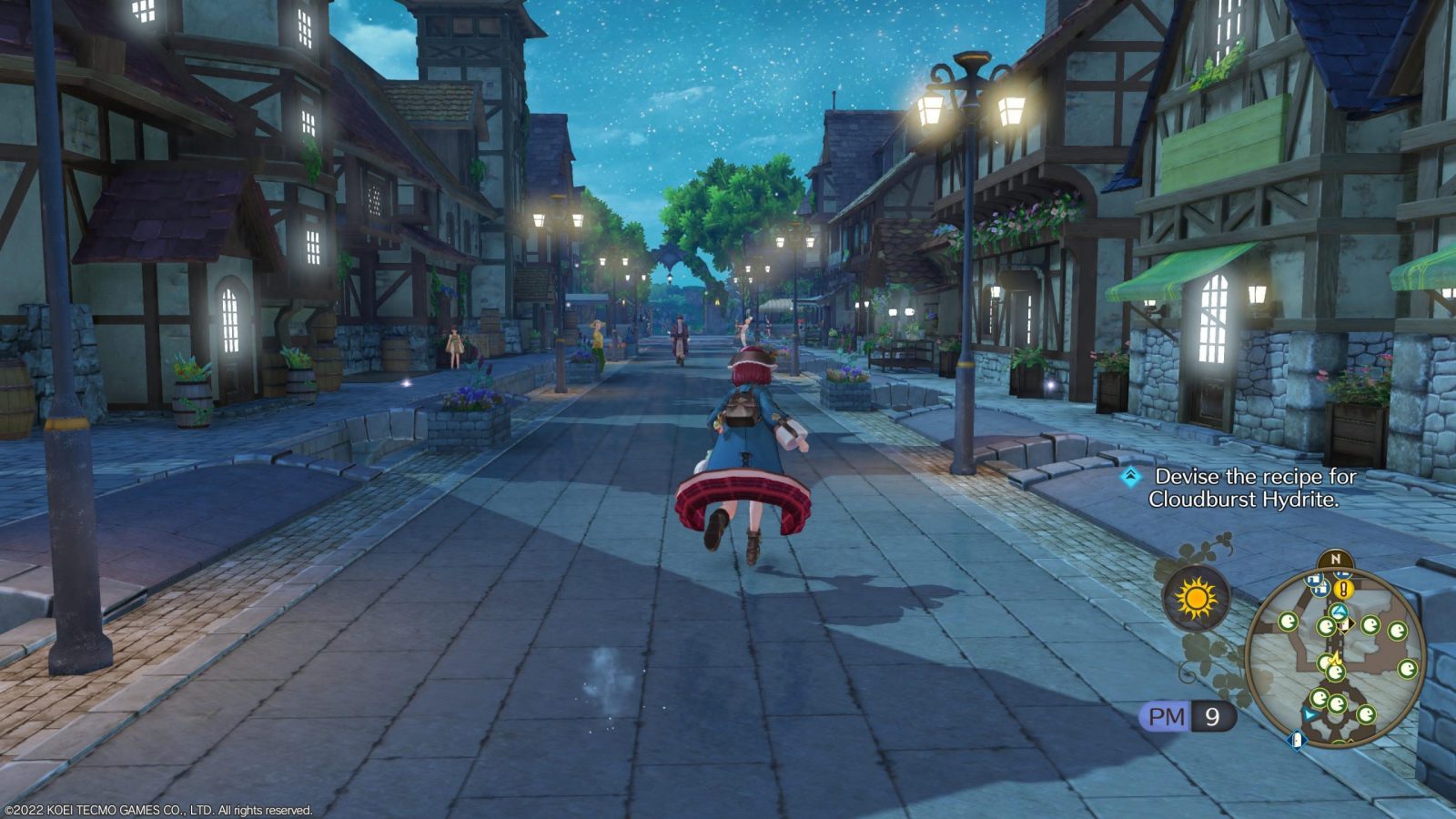 While you will be spending a lot of time exploring or in battles, you’ll spend an equal amount of time using alchemy. To synthesize something, you need a recipe which you discover by collecting the required ingredients (including some made through alchemy). While you do have a recipe book to keep track of what you’re discovering, it can be less than helpful if an item you need to make for the story hasn’t been revealed by uncovering the adjacent recipes. Once you have your formula and ingredients, you approach the cauldron in the Atelier and select what you want to make. Next, you need to choose what ingredients you actually want to use, which is where things start to get complicated.

Every single ingredient has its own attributes and special effects. For example, one stick may have the Cheap effect, which reduces the cost of restocking the created item at a shop, while another will have Attack Charge and MP Max Boost. The former stick would be better suited to creating a consumable item, such as a bomb or healing salve, whille the latter could enhance some equipment to give you an edge in battle. You also have to keep in mind the ingredients elemental attributes. After selecting your components, you place the items into a grid 5×5 grid. Some tiles have elemental bonuses from placing a tile of the corresponding element on top, which in turn will increase the chance of receiving a bonus pertaining to that element seen in the bottom right corner of the screen. You can’t fail this minigame, and can even automate it if you wish, but to get the best results you want to maximize the appropriate elemental affinities, create elemental chains by placing shiny tiles next to each other, and filling out the rows and columns to increase your chance of a Super Success. 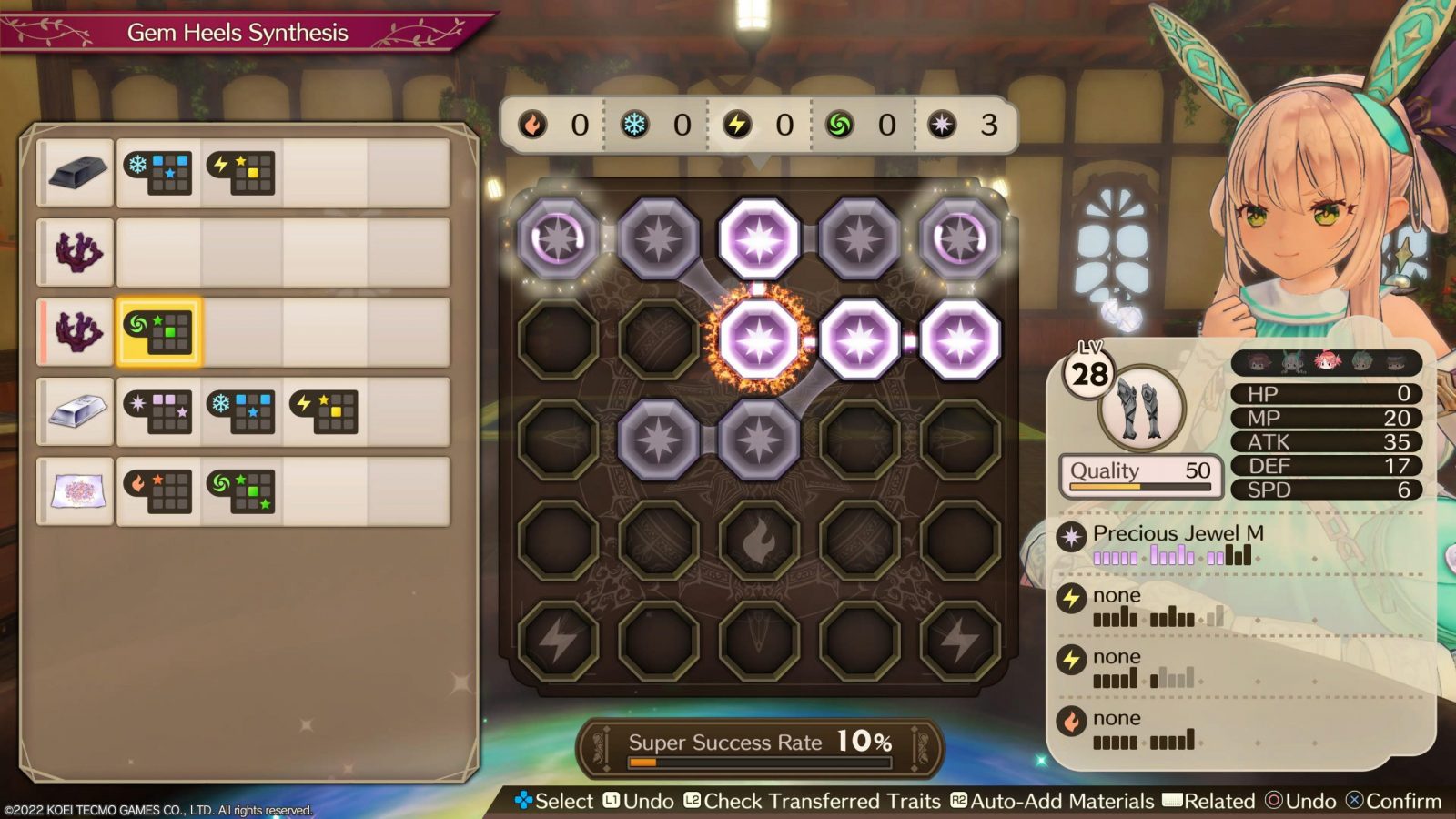 To summarize so far, you need to select ingredients with desired skills and elements to place in the grid and maximize the stats of the resulting item. This can be very complicated and the frequent tutorials really don’t do a good job of introducing you to the finer details of the system.The most I understood from them was that I had to place the complex shapes of tiles so as not to overwrite other pieces I had already placed. However, in later recipes, you will have to do this because you have more pieces than can fit on the grid, so the game could really use some better tutorialization throughout.

While I’m still not sure I fully understand the system, the way alchemy interacts with every aspect of the game and vice versa is a joy to engage with. It constantly gives you something to work towards like making slightly better equipment, getting some elemental bombs to take out that boss or enemy you can’t quite beat, or making new tools to acceses new types of materials you can’t gather with just your hands and staff. The story will require you to make quite a few items, as will side quests you can accept in town. 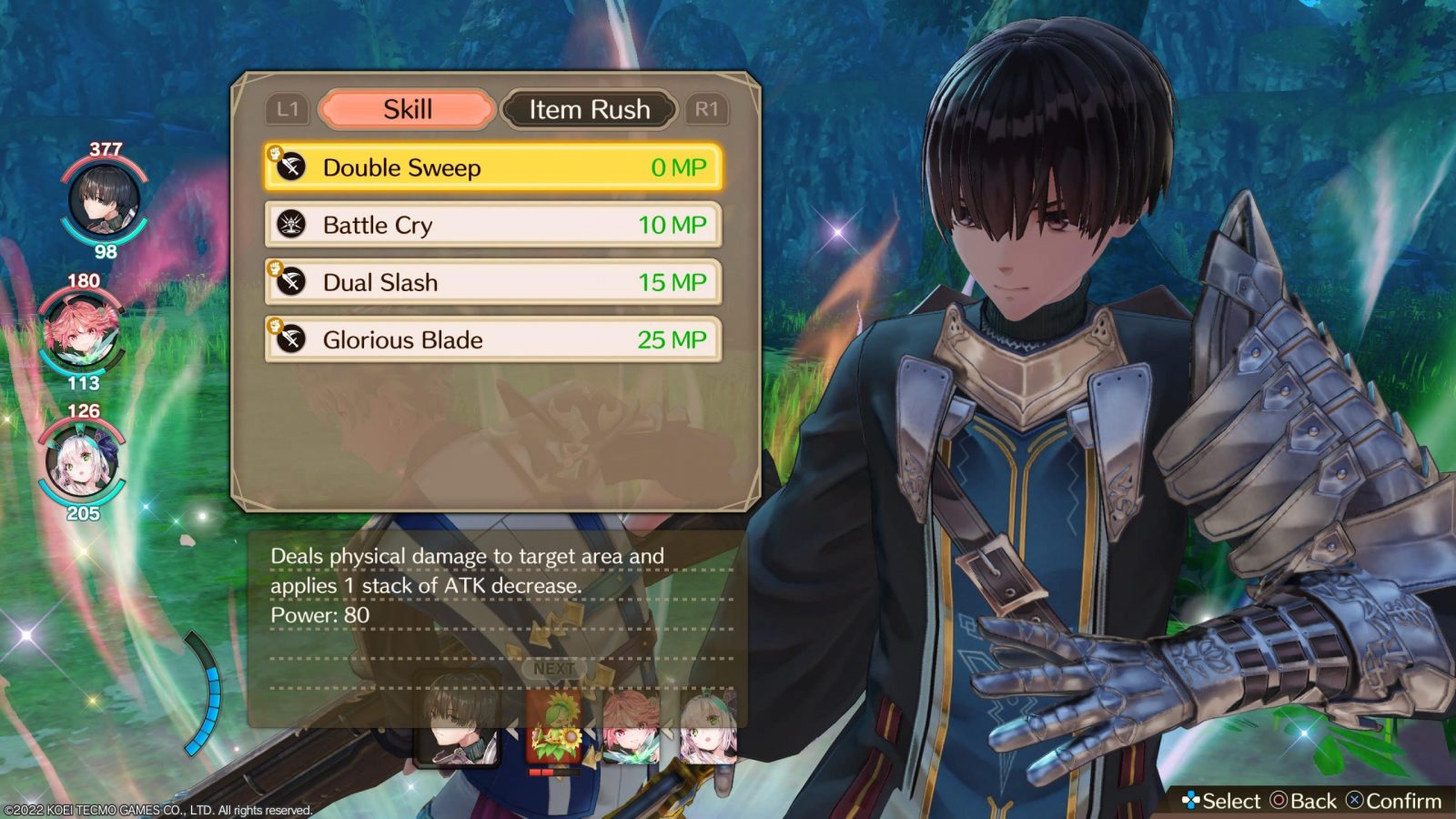 In the side quests especially, you can really feel the convenience of 25 years will bring to a series. Much like Xenoblade, if you already have the items you need when accepting a quest, you can turn it in and get the reward right then and there. I really wish more games would adopt this system, because it really saves on time spent in menus instead of doing what you’re actually here to do. I also appreciate the fact that all items you gather are immediately stored upon returning to the Atelier, and your party is fully healed without you needing to take a rest. This does come with a bit of an annoyance with regards to equipment, which is also automatically stored and cannot be accessed outside of the Atelier, but seeing as you can instantly teleport to convenient spots around the map it’s not too big a deal if you forgot to equip that accessory or fishing rod. Practically anything you want to know or get is always at your fingertips, which lets a complex game feel approachable and, most of all, fun.

While the visuals and music are appealing and cheery, my biggest complaint with the game overall comes front the character designs. While I adore Sophie’s outfit, other characters feel a bit too revealing for the chibi art style. In the first cutscene, Platcha’s outfit really bothered me given how much she looks like a child, and the trend continues throughout the game though to a lesser extent. Some of the older characters’ designs are fine, though the constant jiggle physics still bother me, but I actually found the random NPC’s appearances to be the most appealing. Oddly, they don’t use the chibi style so Sophie and co. can look very out of place, but the background characters look more unique and interesting when so many games use the chibi style.

Atelier Sophie 2: The Alchemist of the Mysterious Dream

Atelier Sophie 2: The Alchemist of the Mysterious Dream presents an immediately engaging gameplay hook. The story is interesting and can get new players caught up fairly quickly, though the character designs can leave a lot to be desired. Battles and alchemy are a ton of fun, but the game does have trouble explaining all of its systems effectively.

David is the kind of person to wear his heart on his sleeve. He can find positives in anything, like this is a person who loved Star Fox Zero to death. You’ll see him playing all kinds of games: AAAs, Indies, game jam games, games of all genres, and writing about them! Here. On this website. When not writing or playing games, you can find David making music, games, or enjoying a good book. David’s favorite games include NieR: Automata, Mother 3, and Gravity Rush.
Related Articles: Atelier Sophie 2: The Alchemist of the Mysterious Dream
Share
Tweet
Share
Submit