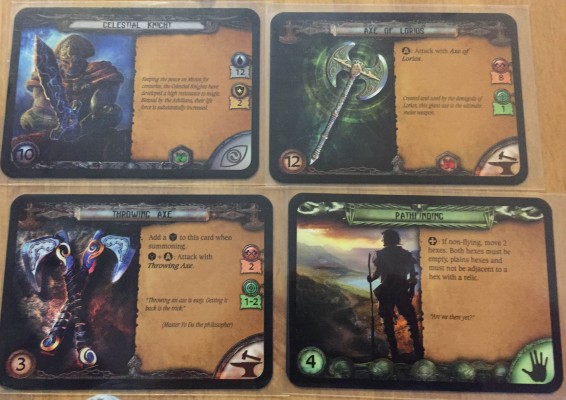 This is the moment you have been waiting for. You are a young Athilian participating in one final test of creation and destruction. You will face your opponent in one final duel, and only one of you will be elevated to the status of god, becoming a member of the Athilian council.

Athlas: Duel for Divinity is an epic duel that essentially plays out as a game of capture the flag. During the first phase, the creation phase, players design three Alphas (races) of troops, using a large deck of genus, equipment, ability, and spell cards. Players will also choose a certain number of divine intervention cards, representing their overarching strategy. During the second phase, the command phase, players summon their designed Alphas, attempting to have one unit capture two out of the three relics spread across the battlefield. Players can attempt many strategies. Maybe units will try to flood the battlefield, or maybe they will try to rush a quick victory, or maybe they will just form near-impenetrable formations. It would be impossible to imagine, let alone describe, all of the strategies that are possible in this game.

All cards have a certain cost, so units that are more specialized will also be more expensive. The genus card represents the central characteristics of an Alpha, notably its base hit points, and each Alpha needs one. There are nine different genus in the game, each of which plays incredibly differently. One is proficient in magic, while another can create an undead horde, and yet another is simply a tank. Players will customize these genuses using equipment cards, ability cards, spell cards. Equipment cards represent weapons, armor, or even items like poison darts or shovels. Ability cards change the fundamental nature of an Alpha, maybe by increasing an Alpha’s melee attacks or by giving it more hit points. The most important ability cards are Forsaken Wings and Pathfinding, both of which make units move two spaces instead of one. Because speed is important in this game, these cards are almost always used. Spell cards can only be used by magic users. Some spells are very powerful attacks, but there are also some good control cards: one temporarily make a unit able to fly, while another creates an earthquake that can hit almost any unit. Because there is a massive number of cards to look through, spell cards should not be used in a player’s first game.

After creating the three Alphas, players will pick up to four divine intervention cards. These cards will help cement a player’s overall strategy. During the second phase, a player can play at most one divine intervention care during their turn and at most one during their opponent’s turn. These cards have various effects, such as moving relics, temporarily increasing a unit’s melee attack, or resurrecting a unit that was just killed. Players will place these cards in the order they wish to play them.

Once both players have created their three Alphas and their divine intervention deck, play will proceed to the command phase. During a player’s turn, a player will activate all of their units and then summon up to one more unit. Every unit has a move activation (represented by a plus sign) and an action activation (represented by an A). Unless a unit has a special movement action, such as flying or pathfinding, the move action will always be moving up to one space (units with flying or pathfinding can still move as normal, if they choose). An action activation could be used for an attack, but there are plenty of other actions available on the cards, such as increasing an ally’s attack value, healing an Alpha, or digging a hole. If a unit climbs a mountain, descends into a crater, or passes a relic, this requires both the move activation and the action activation. Once all units are activated, one more unit can be summoned on the back row by paying its cost, never exceeding the agreed-upon summoning points total. Play will continue until one unit is holding onto two relics.

Relics are those orange things in the center.

Athlas really surprised me. It is incredibly innovative, and the theme is amazing. The theme of creation came through very well. I had a lot of fun building these different classes of units and then having a chance to test them out. In the first phase, players are trying to create the Alphas, as well as devise some grand strategy. There is an incredible number of strategies that a player can attempt, and with loose rules governing for the construction of units, the players have a lot of control over the implementation of their strategy. Players will actually feel like an omnipotent force engaging in the art of creation. Yet in the second phase, two grandiose strategies will clash. The winner of the second phase is the player who can better apply their strategy while still adapting to their opponent’s strategy and noticing the faults in the opponent’s strategies. In the second phase, a player changes from an omnipotent force into an omnipresent commander, attempting to outwit the opponent. If the first phase is about strategy, the second phase is about tactics. I love the contrast between these two phases.

The first phase is almost reminiscent of deck construction for some collectible card game, but the twist is that you get to immediately try it out. The first phase lasts 15 minutes, and the second phase lasts 30-45 minutes, so you can quickly try out and then further refine your strategy. There is even an official variant to allow for an immediate rematch with an opportunity to refine your strategy between the two match. The two phases could equally be called the strategy phase and the tactics phase. This game is very interesting and unique for that clear delineation. I love customizable games, and I love how this game streamlines that process of trying out your new deck.

I especially love how summoning works. Units within the same Alpha are united in many ways, and they share a common life force, instead of having individual hit points. That pool of hit points only refreshes to full health when one unit of that Alpha dies. For example, if an Alpha has six hit points remaining in its common pool, one unit in that Alpha is hit for four damage, and a second one is hit for three, the second unit will be removed from the board and the Alpha will be restored to full health. This forces players to pay attention to all of the units. No one unit should be left vulnerable, because that leaves all units in that troop vulnerable.

The components are mostly good. I really like the miniatures because they are made out of this almost rubbery plastic that is very durable, and the four different molds are distinct enough to allow for easy differentiation. The player pieces and cards are all clearly distinguished between gold and silver, and the contrast between the two colors is quite striking. I also enjoy the art. It is detailed, with even the simplest of weapon card having great depth and perspective. However, the production quality is not perfect. In order to keep track of health, there are little tear-markers, and those markers are too small. In order to mark how expensive a unit is, there are double-sided markers that are a bit fiddly. However, I have trouble coming up with anything seriously negative for this game. During the first game, it will take a while to look through the cards. But, that’s only a potential con for some players. After one game, the cards become more familiar; the iconography and card layout is also very logical.

However, limitations in movement is one negative in this game. There are two cards, Forsaken Wings and Pathfinding, that should be used in almost every game. If those cards are not used by one player, that player’s units will move much slower than the other player. If neither player uses those cards, the game will be slow to start up. However, if both players use those cards, the game has a much better pace. The fact that these cards are pretty much necessary partially undoes this game’s biggest asset: its customizability. However, the negative impact is only slight; the opportunity for customization remains very broad.

Ultimately, I think this game would be ideal for anyone who enjoys the idea of customizable games but who does not have the time or money to build the ultimate deck. Also, this game is for anyone who is interested to see the delineation between strategy and implementation, between omniscient forces and omnipresent generals. It is a game about conflict, but moreover it is about outmaneuvering your opponents. It offers a diverse array of options for customization, but it is also very quick and easily manageable.

Athlas feels like a customizable game, yet is a complete game out of the box. Ultimately, this is a game for people who don't have the time and/or money to play customizable games. With a great number of strategies possible, players will be able to quickly construct and then try out customized units in a great game of creation