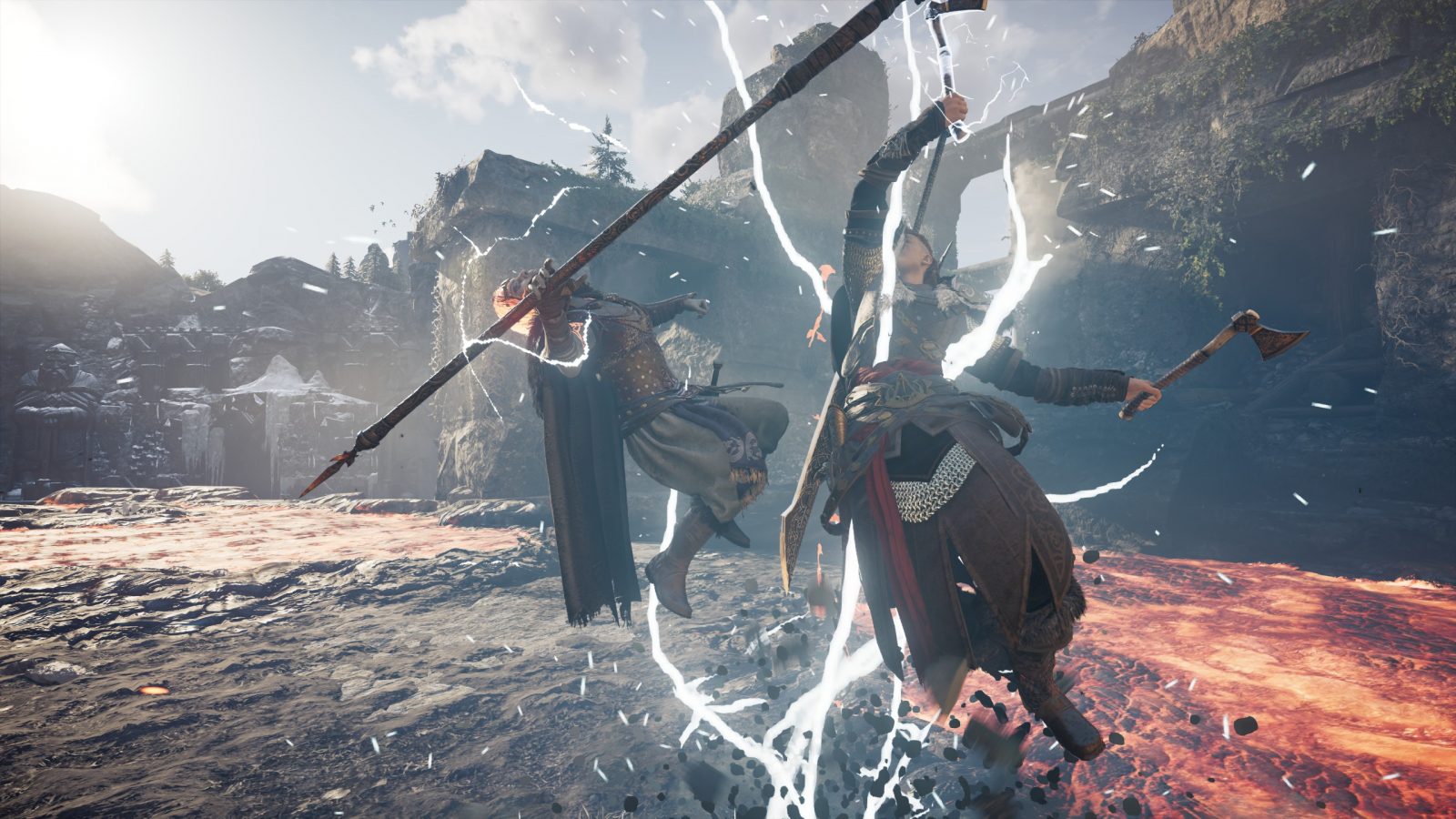 Ragnarök is coming. The son of Odin, Baldr, has been kidnapped by Muspels, and the Dwarves of Svartalfheim have been enslaved by the fire and ice giants. In a confrontation with the Muspelheim leader, Surtr, Havi is defeated, Frigg is killed, and Baldr remains in chains. Now, to save his son, Havi must seek out the Dwarves to find some sort of bargaining chip, and maybe save Svartalfheim in the process.

Dawn of Ragnarök is Assassin’s Creed Valhalla’s third paid expansion, and it follows up the adventures of Odin, or Havi, in Eivor’s dreams. The two previous arcs of this story were in the main game, but this finale is much larger than both of those combined. Svartalfheim is a massive realm, complete with tons of side quests, locations to discover, and even an arena to relive the mythic sagas in. I’ve always found exploration to be the most alluring part of Valhalla, and after a short intro Ragnarök puts you right into that headspace. Before you can start any quest chains you have to find them first. You do this by seeking out Dwarven shelters – they’re marked vaguely on your map with some hidden signs in game to point you in the right direction. Once there, you can shop, upgrade your gear to the new Mythic tier, and talk to NPCs who might have some lead in your quest to rescue Baldr.

I really love how freeform the expansion starts out. It makes it feel like you’re the one progressing the story forward rather than just chasing after quest markers. Unfortunately, after following this pattern for two shelters, the game ditches that freedom in favor of more linear quest markers right to the end. Because of this sudden shift, I feel the story suffers from some very poor pacing and even some padding in the back half. Reaching the credits added about 15 hours onto my already over 100 hours of playtime, and I think being a bit shorter would have tightened the storyline. There are a few beats near the end that don’t hit nearly as hard as the game thinks they should because I just spent the last half hour looting a dungeon and have only a loose idea of what’s going on anyway.

Despite that, I think DoR is Valhalla’s most worthwhile expansion by far because it offers something new and novel to the game: Hugr Powers. Early on, Havi receives a second bracer which allows him to take the life force from foes and, much like Mega Man or Kirby, use special abilities. For example, taking power from a Muspel will allow you to take on their fiery form as a disguise or to walk in lava. Meanwhile, some Jotun give you the power to fire teleporting arrows at certain markers or even at enemies to assassinate them once upgraded. You can even take on the form of a bird to aid in traversal or reach new areas you couldn’t climb to before. While there are five powers in total, you can only hold two at a time and the energy to use them is limited, so you need to make wise decisions for your current situation. 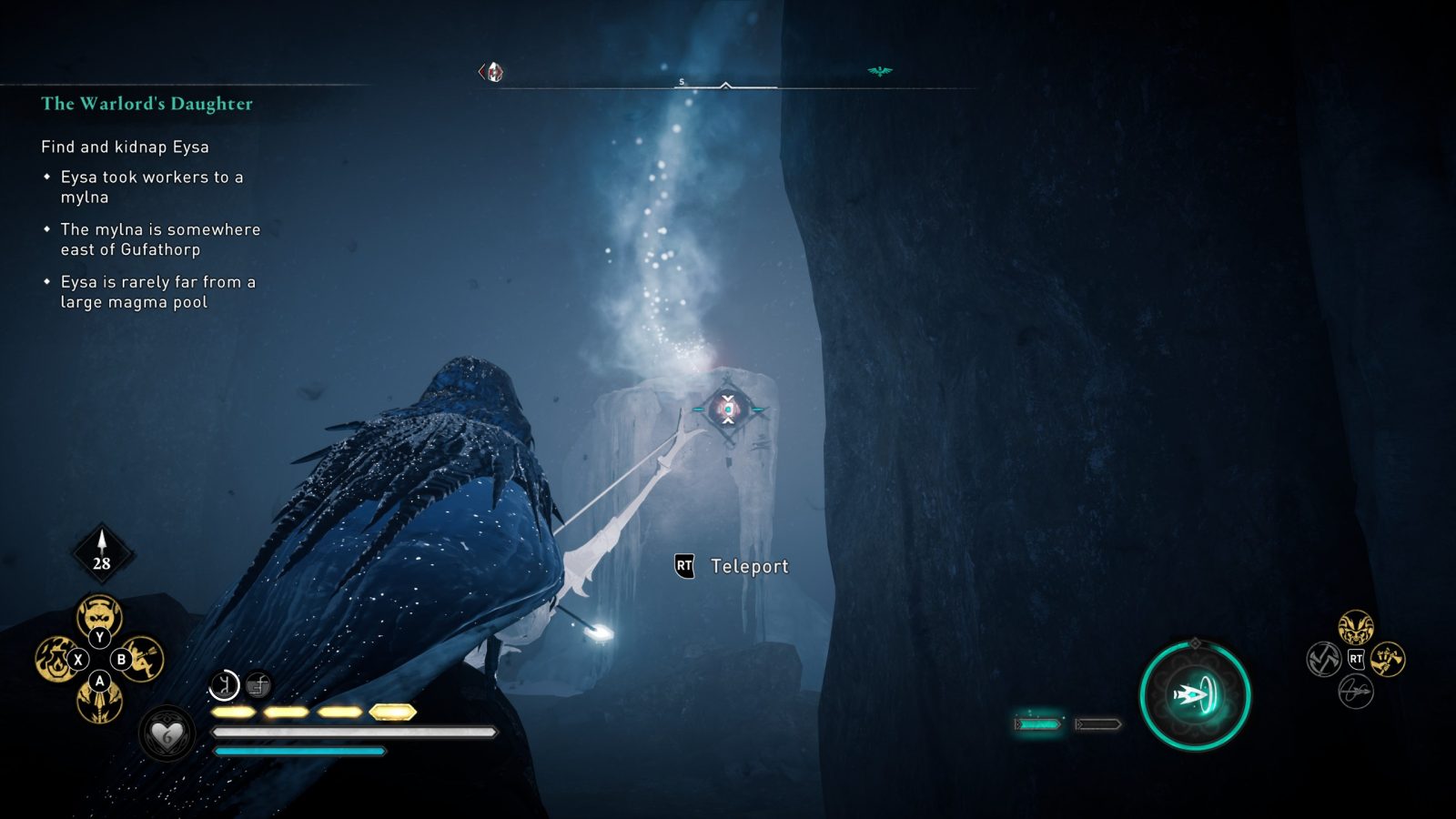 The powers are a ton of fun to use, but I do think they suffer from some over-engineering- namely in how available they are. While you can only hold two at a time, if one is required for a puzzle or would be useful in a combat encounter, the power you need will be readily available. This lessens the impact of having to actually make a choice. This could have been mitigated by the fact you can only hold one charge of Hugr at a time (two when upgraded), but there’s almost never a shortage of refills, whether that be through the glowing flowers that dot the landscape, shrines to sacrifice some of your health, or just killing a few enemies. It’s still a fun system to engage with, and some of my favorite moments were figuring out the right way to use a power to solve a puzzle or repeatedly teleport assassinating entire camps of enemies, but the limitations feel pointless when you hardly ever run into them.

Ragnarök also adds a new, unique weapon type: the Atgeir. This two handed blade allows you to access unique combos by pressing the light and heavy attack buttons in different combinations. For example, pressing light three times leads to a series of wide swings, while two lights then a heavy results in a powerful cross cut. Going into the expansion with my massively overpowered character (the same issues with difficulty, or lack thereof, from my other reviews apply here), I dual wielded one of these with the Gae Bolge and it made me a lot more engaged in combat. Even if I could kill enemies quickly regardless of what combo I used, having the option kept me more interested than simply mashing the button. These will certainly be sticking around in my arsenal for the foreseeable future, though it is worth noting that, should you choose the new game option just for this expansion, you cannot take that same character into the rest of the game. 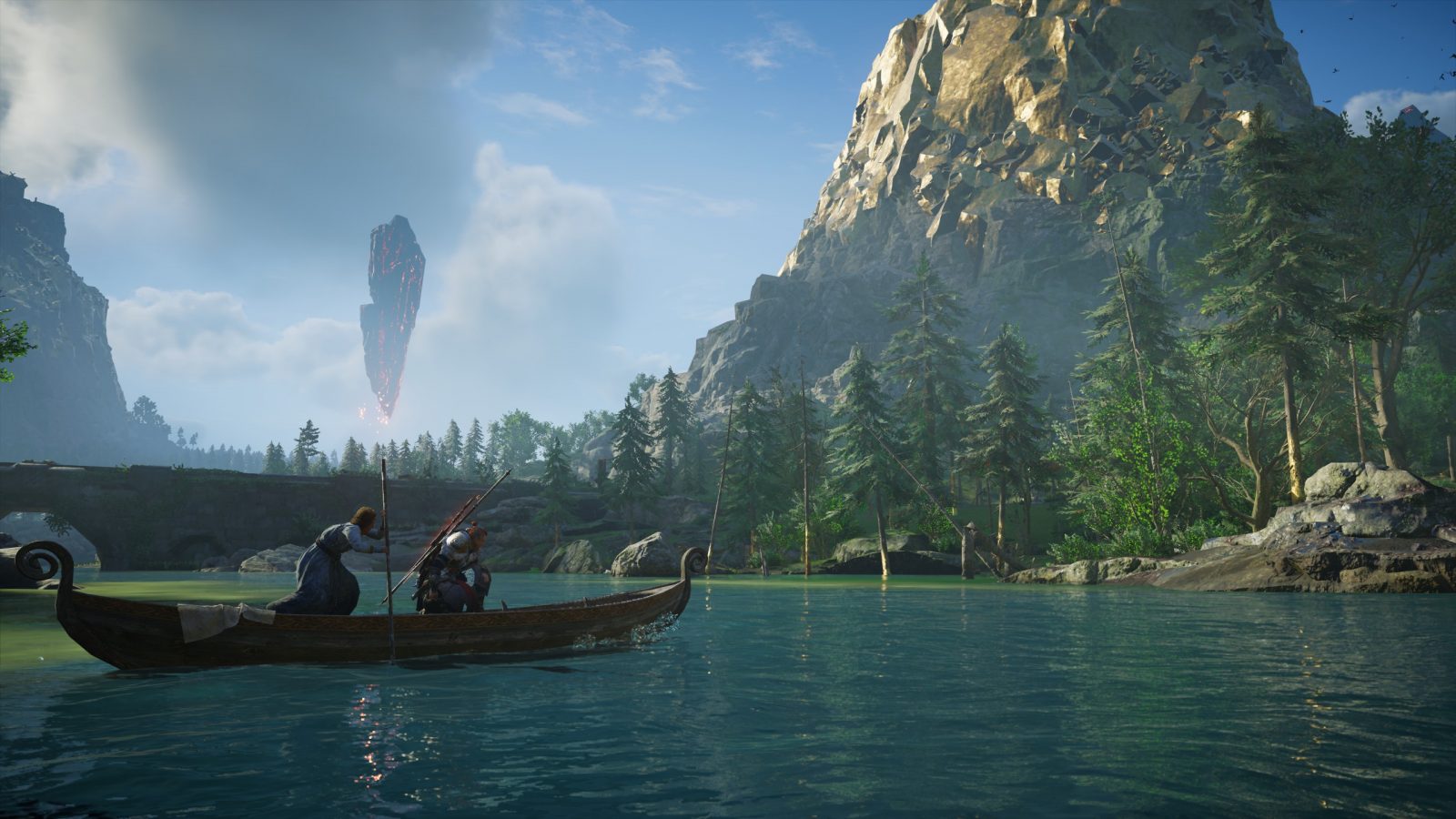 Given how gorgeous Valhalla already was, Ragnarök’s Svartalfheim (try saying that five times fast) is unsurprisingly no exception. Its hilly grasslands bring a somewhat alien beauty to the table with mountains made of gold, and giant glowing flowers. I more than made use of photo mode as you can see in these screenshots, and I especially enjoyed the dichotomy of fire and ice encroaching their way into these once peaceful lands.

Svartalfheim is about just as fun to explore and fight your way through as any other Valhalla zone, if not more so with the added powers, but the encounter designs are really lacking in the stealth department. Enemies are often grouped just close enough together that you can’t pick one or two of them off without alerting the whole squad which really puts a damper on my preferred playstyle. I hope you like combat, because it is the primary way you will engage with foes in Svartalfheim unless you decide to abuse teleport assassinations along with the sleeping gas upgrade.

While it stumbles greatly in execution, Assassin’s Creed Valhalla - Dawn of Ragnarök reignites the magic of the main game with a vast realm to explore and myriad secrets to discover using the new Hugr powers. It’s still a ton of fun, just don’t expect the story to be all that coherent.

David is the kind of person to wear his heart on his sleeve. He can find positives in anything, like this is a person who loved Star Fox Zero to death. You’ll see him playing all kinds of games: AAAs, Indies, game jam games, games of all genres, and writing about them! Here. On this website. When not writing or playing games, you can find David making music, games, or enjoying a good book. David’s favorite games include NieR: Automata, Mother 3, and Gravity Rush.
Related Articles: Assassin's Creed Valhalla: Dawn of Ragnarök
Share
Tweet
Share
Submit