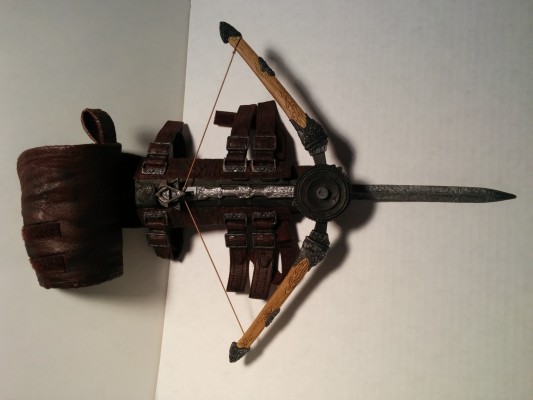 I’m a dork. I have a Magic Galleon punching hand puppet from Lunar the Silver Star, pilsner glasses from the original Burnout, a full-sized chainsword replica from Warhammer: Space Marine, a Keyblade from Kingdom Hearts, and far more than fits in my office neatly. Now, nestled neatly between my Bahamut from Final Fantasy VII and my Invid Shock Trooper from Robotech is a shiny new goodie – the Phantom Blade from Assassin’s Creed Unity.

Unlike last year’s replica for Assassin’s Creed IV: Black Flag, there is far more on the plate than a retractable dagger this time around. Modeled after the weapon Arno eventually wields in Unity, this full-sized functional replica has far more moving parts.

In terms of construction, the device is made of a rigid leather-like plastic for the main assembly. The weapon portion is also painted plastic, textured to look like wooden arms for the crossbow, and aged metal for the firing mechanisms, buttons, and embellishments. There is an intricate level of detail present, albeit best viewed at a distance. Buckles are moulded into the plastic and painted, with some areas of the weapon standing out as flat and unpainted as is the case with the bottom of the weapon. That said, for such a low price it is surprising just how good it looks.

The device comes as two parts to make up the entire assembly. The second piece is a more flexible plastic that allows the secondary straps on the primary element to attach securely. It fits comfortably on my forearms, but obviously your mileage may vary depending on the size of yours. I could see it comfortably holding up to a day of cosplay for those so inclined.

Mechanically, the device is fairly simple. There is a spring loaded assassin’s blade that extends from the undercarriage of the weapon by depressing a button on the rear of the device. The 5.5” Hidden Blade springs to life, sliding free with a satisfying snap. Just above that is symbol of the Order of the Assassins that serves as a second button to launch the Phantom Blade – the blade Arno is able to use as a silent ranged tool. There is a third button at the top of the device, directly on top of the gear that actuates to unfurl the arms of the crossbow for the Phantom Blade. All three buttons blend nicely into the weapon, preserving the look and feel of a real weapon without looking like a toy.

The Phantom Blade is essentially a wrist-mounted crossbow. On this device, the string is merely cosmetic, so the weapon can be fired from “stealth mode” – that being with the arms retracted. Still – it’s great that the whole thing folds up and can be relatively easily concealed under a robe sleeve.

Both the Hidden Blade and the darts from the Phantom Blade are made of a flexible thermoplastic. This ensures that you can’t actually hurt anyone. Both have a patina-like finish that makes them appear aged. The dart is embellished but worn from use.

The final piece of the weapon transcends into the game proper. Also included is a code to download the French Cavalry Pistol in Assassin’s Creed Unity. By redeeming the included code, you are granted this mid-range weapon for a single platform of choice. It’s not an overly powerful weapon, but if selected at the beginning of the game it’ll provide a solid advantage against your foes.

My only concern with the Phantom Blade is the moving parts. The only metal in the device are a handful of screws that hold the assembly together, and the springs that bring the whole thing to life. With the bulk of the moving parts being plastic, I can imagine it won’t hold up to a great deal of abuse – think of this as more of a showcase and occasional use toy.

The weapon comes in at a cost of $59.99, and given the PVC and thermoplastic design, I’m surprised to see it at this low of a price. If you are prepping for next year’s Halloween party, or have a costume party sometime in your future, it’d be hard to not recommend the Phantom Blade for the Assassin’s Creed fan in your life.

Ron Burke is the Editor in Chief for Gaming Trend. Currently living in Fort Worth, Texas, Ron is an old-school gamer who enjoys CRPGs, action/adventure, platformers, music games, and has recently gotten into tabletop gaming. Ron is also a fourth degree black belt, with a Master's rank in Matsumura Seito Shōrin-ryū, Moo Duk Kwan Tang Soo Do, Universal Tang Soo Do Alliance, and International Tang Soo Do Federation. He also holds ranks in several other styles in his search to be a well-rounded fighter. Ron has been married to Gaming Trend Editor, Laura Burke, for 21 years. They have three dogs - Pazuzu (Irish Terrier), Atë, and Calliope (both Australian Kelpie/Pit Bull mixes).
Related Articles: Assassin's Creed Unity Phantom Blade
Share
Tweet
Share
Submit