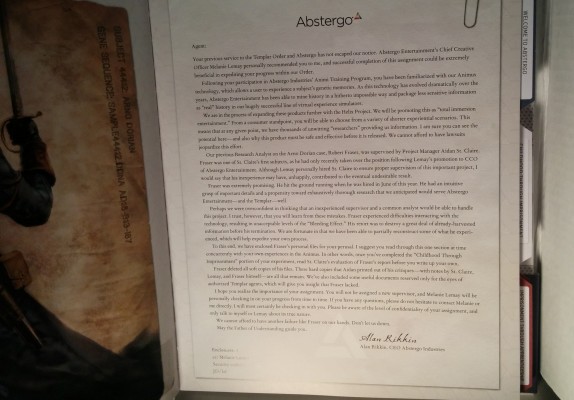 Being committed to a fiction requires more than a slick veneer to pull your audience in.  It requires a great deal of backstory, detail, and in the case of Assassin’s Creed, filling in large swaths of history.  The team at Insight Editions did exactly that last year for The Lost Journal of Blackbeard coinciding with the release of Assassin’s Creed IV: Black Flag.  This year they’ve taken a different approach.  It couldn’t have been more of a success.

While the book is certainly couched in the fiction of Assassin’s Creed Unity, this effort from Insight Editions is a full Abstergo Employee Handbook.  All of the art books we’ve seen trained on the backstory of the Assassin’s Creed have spent very little, if any, time on the fictional (we hope, at least) company that powers it all — Abstergo.  Rebranded as Abstergo Entertainment, this book is an archived file of employee Robert Fraser, an Abstergo analyst assigned to work Case File 44412, better known as Arno Dorian.

The tabs make it feel like a real manual

Set up from the perspective of the shadowy organization, the employee handbook looks like a legitimate handbook you might receive when starting at any large corporation.  It has tabs identifying sections of your case file, preceded by Frazer’s welcome letter from HR, a printed Abstergo mission statement (removable so he could frame it for his desk), his non-disclosure statement, motivational flyers pitching the Abstergo work environment, and even a look into some of the non-nefarious (which are totally nefarius) apps Abstergo makes beyond the Animus and Helix.

Given the source, it’s no surprise that the Templars are presented as “Fallen Heroes” and the Assassins as “History’s Hitmen”, but it’s in this area that you get your first nod that this is something more than a pitch for Unity.  It covers series staples like Rodrigo and Cesare Borgia, Haytham Kenway, Altaïr Ibn-La’Ahad, Ezio Auditore, Aveline de Grandpré, and Edward Kenway.  They are presented as propo pieces, casting the assassin’s as lowly thugs, murderers, and faux caricatures of their true nature.  It also marks the return of the heavily-rumored Asian-themed Wounded Dragon, Rising Phoenix project mentioned in Assassin’s Creed IV: Black Flag and outright listed as coming soon in Assassin’s Creed Unity.  I’m sure that there are a great many of us that want that property to be real.

The book is split into five tabs, with the final being listed as “Eyes Only” — I’ll let you discover the surprise beyond that gate.  The tabs set up a timeline of Arno’s life, from childhood through imprisonment, imprisonment through apprenticeship, detailing his enemies and allies, and all titled accordingly.  Christie Golden, author of the aforementioned Lost Journal of Blackbeard, has done a superb job interlacing real history with fiction, as well as bracing the incredible artwork that graces each page.  Throughout the project files are notes to Fraser from various departments in Abstergo.  A letter encouraging him to take breaks due to the graphic nature of his work, notes from his doctor to his handler discussing his “Bleeding Effect” (an Animus side effect which causes the virtual reality simulation to begin to bleed into the reality of the user), and even handwritten notes and plane tickets that chart Fraser and his rise through the ranks of Abstergo.

I don’t want to talk out of school, but it’s fair to mention that there is not a great deal of repetition of concept artwork between this product and their competitor Titan’s artbook – a nod to both.

The book’s artwork has beautiful saturation

Interspersed between the files and official Ubisoft artwork are pieces from Andy Belanger, and Karl Kerschl.  Belanger has traveled these roads before, inking the period comic, Kill Shakespeare.  Kerschl has deep roots into the Assassin’s Creed universe, inking and co-writing three graphic novels for the property — The Fall, The Chain, and Brahman.  Both Montreal-based artists provide the webbing needed to tie it all together, and they do so beautifully.   While there is obviously a large difference between the official art and the work from these two comic artists, it blends in well.

I want to commend the layout team at Insight for their work on this book.  The book is interactive (courtesy of pull-outs and loose pieces of paper), but it also evokes the feeling of a hastily cobbled file folder.  It looks like pieces of tape are holding some pieces in place, portions are redacted, and drawn-in paperclips hold notes in the margins.   In terms of completeness and entertainment value, this may be their best effort to date.

Paris at war with itself.

Put plainly, I don’t have a bad thing to say about this book. While it is focused on Arno, it seamlessly ties it into the rest of the fiction, but it does so in a way that flips the whole thing on its head. If you are a fan of the Assassin’s Creed universe, and wanted to see it from a whole new perspective, this is a must-have.

Ron Burke is the Editor in Chief for Gaming Trend. Currently living in Fort Worth, Texas, Ron is an old-school gamer who enjoys CRPGs, action/adventure, platformers, music games, and has recently gotten into tabletop gaming. Ron is also a fourth degree black belt, with a Master's rank in Matsumura Seito Shōrin-ryū, Moo Duk Kwan Tang Soo Do, Universal Tang Soo Do Alliance, and International Tang Soo Do Federation. He also holds ranks in several other styles in his search to be a well-rounded fighter. Ron has been married to Gaming Trend Editor, Laura Burke, for 21 years. They have three dogs - Pazuzu (Irish Terrier), Atë, and Calliope (both Australian Kelpie/Pit Bull mixes).
Related Articles: Assassin's Creed Unity Abstergo Employee Guide
Share
Tweet
Share
Submit