By this point, we all know the plot of the Ezio Trilogy of Assassin’s Creed game: collecting feath… – I mean, the rise of the legendary Assassin Ezio Auditore da Firenze. The first leap of faith of his journey, rebuilding the town near your villa from the bottom up, protecting your family and allies, collecting blueprints for Leonardo da Vinci to make you weapons, and of course; thwarting the plans of the Templars – all iconic moments of Ezio’s journey, each leading to an epic showdown in the final chapter. Just a few reasons to replay, or try for the first time, Assassin’s Creed: The Ezio Collection. The Switch Edition is a great way for players new to the Assassin’s Creed franchise to play through three of the most iconic games in the franchise. If you’re a fan who started your Assassin’s Creed experience with Origins, Odyssey, or Valhalla, you may not have ever run into Ezio other than as a bonus costume or legendary shipmate. Now is your chance!

Graphically, whether you’re someone who plays docked on the TV or takes the switch on-the-go, the games run well and look good considering their age (originally released in 2009-2011 respectively). Age is but a number, yet with Ezio’s trilogy you can really tell its age. I personally didn’t find it took away from the experience, but here’s your warning that some aspects of the games are outdated and were improved in later Assassin’s Creed games. I played the first hour docked, and then decided to play the next few hours handheld on the deck outside. Each choice was enjoyable, but I personally liked the ability to have an open world at the palm of my hand. I felt the same way about Black Flag, Rogue, and ACIII ports for the Switch. 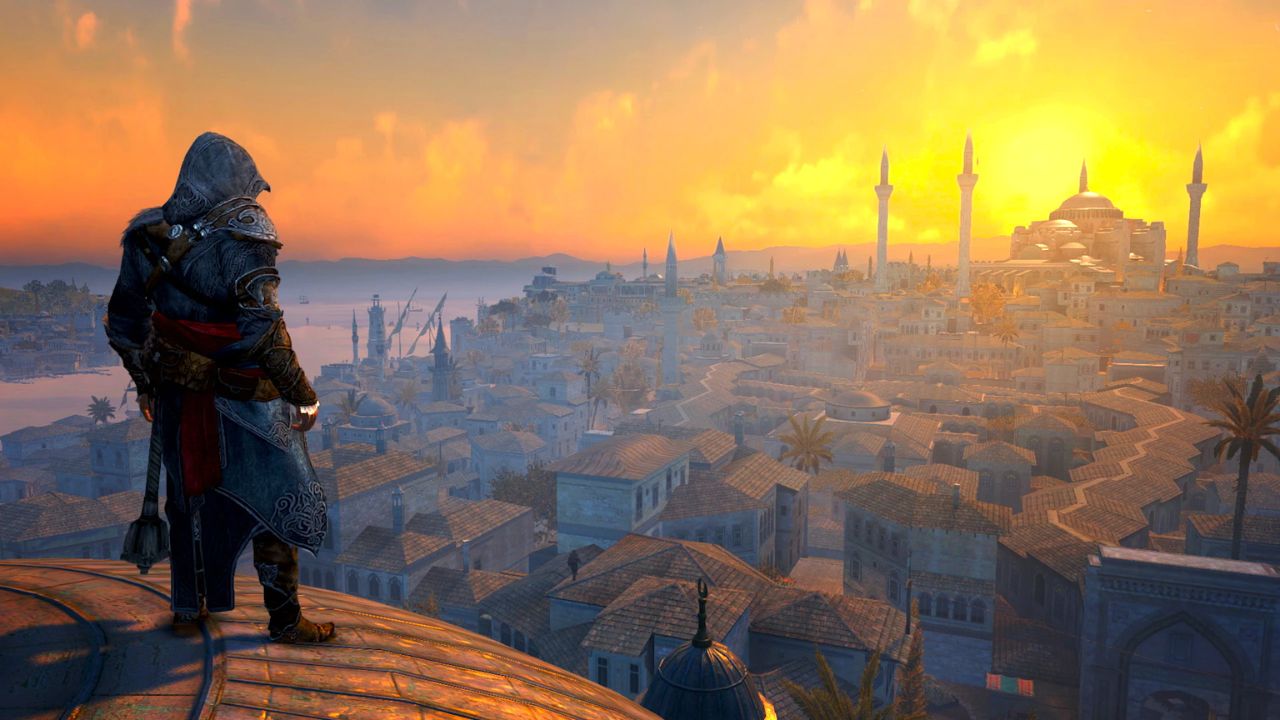 There are some additions that were added specifically for the Switch Edition. The HD rumble feature with the Joy-Con’s add intensity in whichever format you’re playing. There are also options to turn off aspects of the HUD which is a really useful feature when playing handheld. Another surprising thing for the Switch Edition are the load times, which are comparable to the XBOX One edition if not better. The game also includes all DLC and some bonus movies if you’re a fan of the lore.

One thing to keep in mind for new players are the “good ole fashion Assassin’s Creed issues” which include, but are not limited to:

These are normal for these games and are a rite of passage for any Assassin’s Creed fan. If you haven’t yelled, “come on, Ezio!” at least once, you’re playing it wrong. To date however, I haven’t run into any “game breaking” glitches in Assassin’s Creed II. This is an upgrade from my experience on the XBOX 360, which included quite a few moments where I had to restart the mission or the entire game. While we could have hoped for Ubisoft to fine-tune some of these, there’s a certain charm and nostalgia about dying because of something funny like missing a rope. An issue I had early on was how laggy the map is in general while docked. When you’re trying to find new areas to explore or find the missing location, you might be going back and forth to the map. In general, I found it to be lacking fluidity overall. However, when playing handheld, the game actually has an amazing touch screen function which allows you to simply tap what you want highlighted with your finger or stylus. While these are small things, they do impact the gameplay experience in one way or another. When I booted up the game for the first time, I was worried that there would be input lag or some other type of delay in the combat, but was quickly surprised by how well everything worked whether the Switch was docked or in handheld mode. Combat was steady and stayed consistent throughout the course of a fight. The second biggest thing I was worried about was free-running. It would be very easy to fail missions if the game lagged during free-running. I was pleasantly surprised by how fluid the free-running felt even from the opening few missions. With free-running being such a key feature of the Assassin’s Creed franchise, I was glad that everything felt consistent throughout a mission.

Assassin’s Creed: The Ezio Collection on Switch is nostalgic fun for fans of the Assassin’s Creed franchise. It allows you to replay all the iconic moments of Ezio’s rise to power from the comfort of your own bed, bathroom, airplane, or meeting at work. It’s also a great new way to share these games with friends who may not have played these games before. There was nothing better than the nostalgic trip of climbing the tower with your brother into the opening theme and title card. Now go collect those feathers so your mom isn’t sad anymore!

A great reintroduction to what are arguably the most iconic games in the Assassin’s Creed franchise. The Switch Edition allows for anyone to play the game the way they want; TV, handheld, or with the kickstand. Each game looks great however you want to play.

Adam is a musician and gamer who loves his partner in crime, Regan, and their two pets Rey and Finn. Adam is a fan of Star Wars, NFL Football, and gaming in general. Follow Adam on Twitter @TheRexTano.
Related Articles: Assassin’s Creed: The Ezio Collection
Share
Tweet
Share
Submit