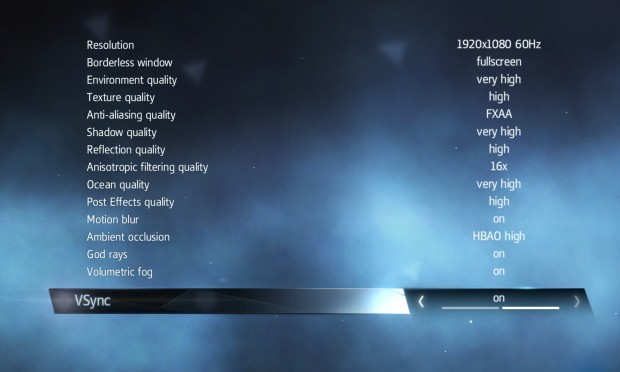 Assassin’s Creed Rogue was the surprise hit of last year.  While Unity was eventually beaten into a better state than it shipped in, Rogue shipped ready to go.  While it didn’t contain the vastly improved parkour system, it was stable, contained a fairly decent story, and benefitted greatly from the shared-but-expanded story presented in Assassin’s Creed IV: Black Flag.  The game released on the Xbox 360 and PlayStation 3, with the promise of a PC port to follow in the spring of 2015.  Well, here we are, and it’s time to see if Ubisoft Kiev can deliver a quality port of the successful Ubisoft Sofia-powered console release.

First and foremost, I won’t be re-reviewing Assassin’s Creed Rogue, as David Roberts did a fantastic job of explaining the mechanics, plot elements, and broader strokes of the game.  (You can read his review here) Instead, I’ll focus on the differences presented by the PC version versus its Xbox 360 and PlayStation 3 counterparts.

Before we dig into the specifics of the upgrade, let’s take a look at the particulars of the minimum requirements. You can find the full specs here, but suffice it to say you’ll need Windows 7 or above, 2GB of RAM, and at least a 2.4 GHz processor.  On the videocard side of things, you’ll need a GeForce GTS 450 / AMD Radeon HD5670 or higher, and 11.4GB of space to hold it all.  Given that the Xbox 360 is almost a decade old, it’s no surprise that a moderately-powered PC can tackle this game pretty easily.   The recommended settings are more videocard centric, with a requested GeForce 560Ti and 4GB of system memory getting the nod.  Given that the 560 Ti comes in for under $100 bucks nowadays, that’s a fairly low bar to jump.  I tested the game on a GeForce GTX 770 and not once saw my framerate drop below 60fps.

Having reviewed nearly every Assassin’s Creed title since the series inception, you can mark this statement with a bit of fanfare.  The initial release of Rogue was fairly problem-free, but the PC version has nary an issue.  4K support, optional eye-tracking (you can use a Tobi Tech or SteelSeries Sentry through native support, though I’m not sure what they add to the equation as I don’t own either platform) and absolutely smooth framerate are all cleanly packaged here for the PC release.  The extra time for the Kiev team paid off, and we are all the beneficiaries of that effort.

If you played Assassin’s Creed IV: Black Flag on PC, you know it was absolutely gorgeous, but inexplicably bouncy on framerate.  Rogue, perhaps due to the age of the engine at this point, is remarkably solid.  It does, however, as a result, have some missing features.  The highest anti-aliasing option available without external programs is FXAA.  There is also some pop-in with no slider available to adjust LOD or draw distance if you have more power to spare.  Even with all of the settings maxed, this game will never look as good as Assassin’s Creed Unity, but it is a marked visual upgrade over its console counterparts.   Feel free to take a look below to see the variety of graphical settings available to you:

As you can see, there is a great deal of improvement here, but the results still fall somewhere between the 360/PS3 console release and what you might expect from PC title.  This won’t be a game you use to show off a new GeForce GTX 980, but it also runs on fairly moderate hardware.  In the end, it’s certainly an upgrade, but don’t expect it to best the incredible visuals (when properly patched) that we got with Unity.

Narwhals, narwhals, swimming in the ocean…

The team in Kiev were tasked with porting the game to the PC, but they were not tasked with cleaning up the mechanics of the game.  This means that the same occasionally wonky parkour mechanics present themselves, it means you’ll see people floating in mid-air and their physics freaking out, it means the same singularly-focused AI, and it means you’ll still enjoy the hell out of it if you liked Black Flag.  While Rogue may have been pitched as an ‘also-ran’ against it’s current-gen-focused bigger brother, much of Rogue’s mechanics are tried and true, if just a little bit clunky.

Assassin’s Creed Rogue doesn’t bring anything new (other than IR tracking) to the PC port, nor was it designed to. Instead it brings forward the fantastic ideas of Black Flag with a solid veneer that’ll run on practically any hardware. Come for the decent graphical bump and rock solid 60+ framerate, but stay for the naval gameplay we all fell in love with.

Ron Burke is the Editor in Chief for Gaming Trend. Currently living in Fort Worth, Texas, Ron is an old-school gamer who enjoys CRPGs, action/adventure, platformers, music games, and has recently gotten into tabletop gaming. Ron is also a fourth degree black belt, with a Master's rank in Matsumura Seito Shōrin-ryū, Moo Duk Kwan Tang Soo Do, Universal Tang Soo Do Alliance, and International Tang Soo Do Federation. He also holds ranks in several other styles in his search to be a well-rounded fighter. Ron has been married to Gaming Trend Editor, Laura Burke, for 21 years. They have three dogs - Pazuzu (Irish Terrier), Atë, and Calliope (both Australian Kelpie/Pit Bull mixes).
Related Articles: Assassin's Creed: Rogue
Share
Tweet
Share
Submit