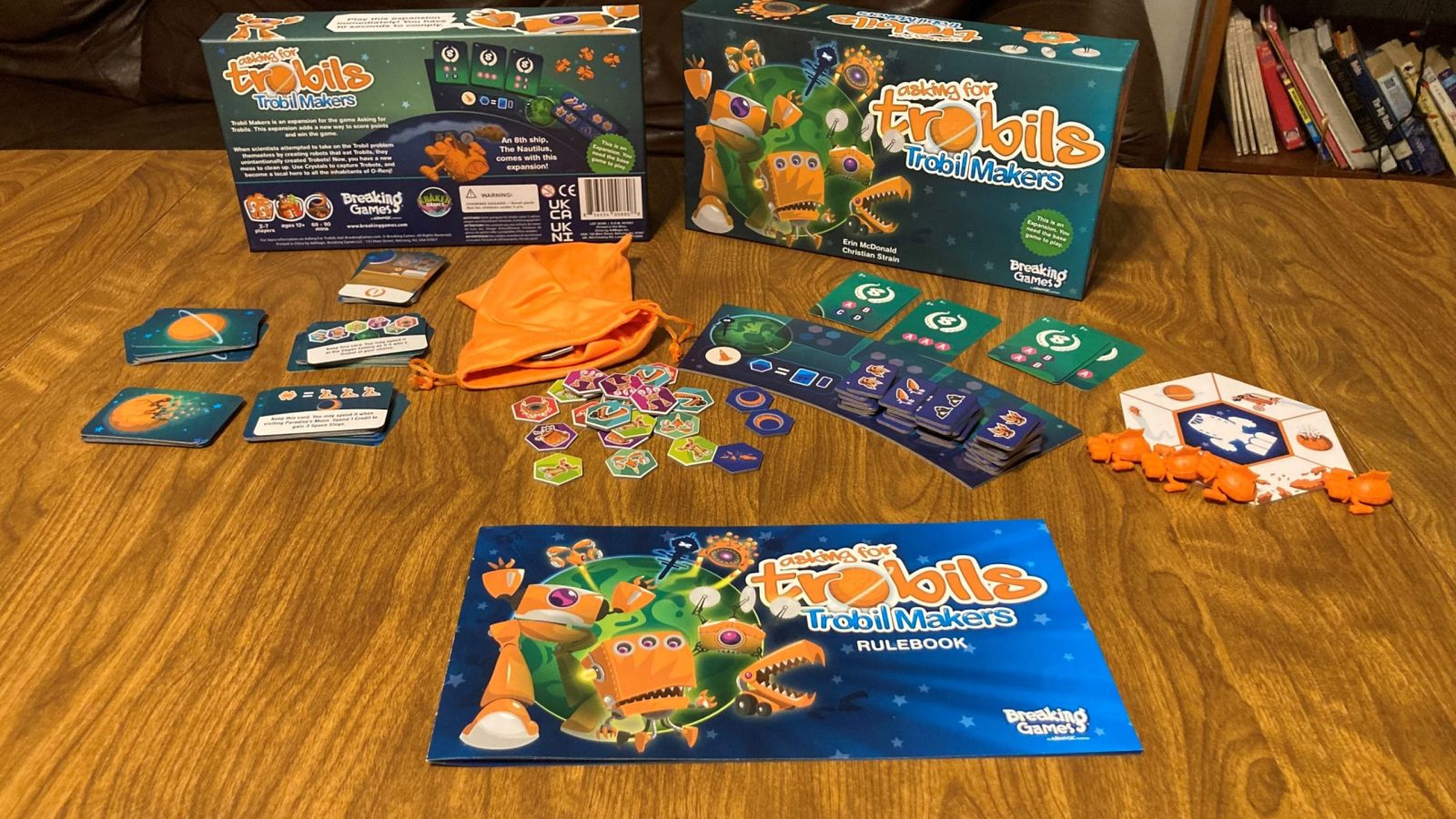 The story to this expansion is that a group of scientists, on a new-to-us location called Sagan Colony, heard about the Trobil troubles in (on) Paradise, and against all advice chose to make Trobil-killing robots and send them to Planet Paradise. Just as anticipated, the robots go haywire and start taking over the system of O-Renj. Now you as a player have to help eradicate both the Trobil problems and the Trobots.

Trobil Makers utilizes the action economy mechanism of the base board game to produce Trobots. The Trobots populate the board every time you or any other player picks up their ships. A player draws the same number of Trobot tokens from the bag as ships they picked up on their turn. On one side of the token is the location where the player places the Trobot. On the other side is the art depicting the type of Trobot. The designs range from dinosaur-looking to one that looks like a mechanical Beholder from Dungeons and Dragons.

This expansion adds the aforementioned location Sagan Colony to the game board. There, you can return groupings of captured Trobots in exchange for victory point cards with the matching Trobot combinations. When you exchange Trobots for a card, you can also take a connection card from Sagan Colony. These connection cards double the value of an existing connection on your ship, but you must take the connection that has the least amount of modifications. If you have a tie between any amount of connections, you can choose which connection type to take. 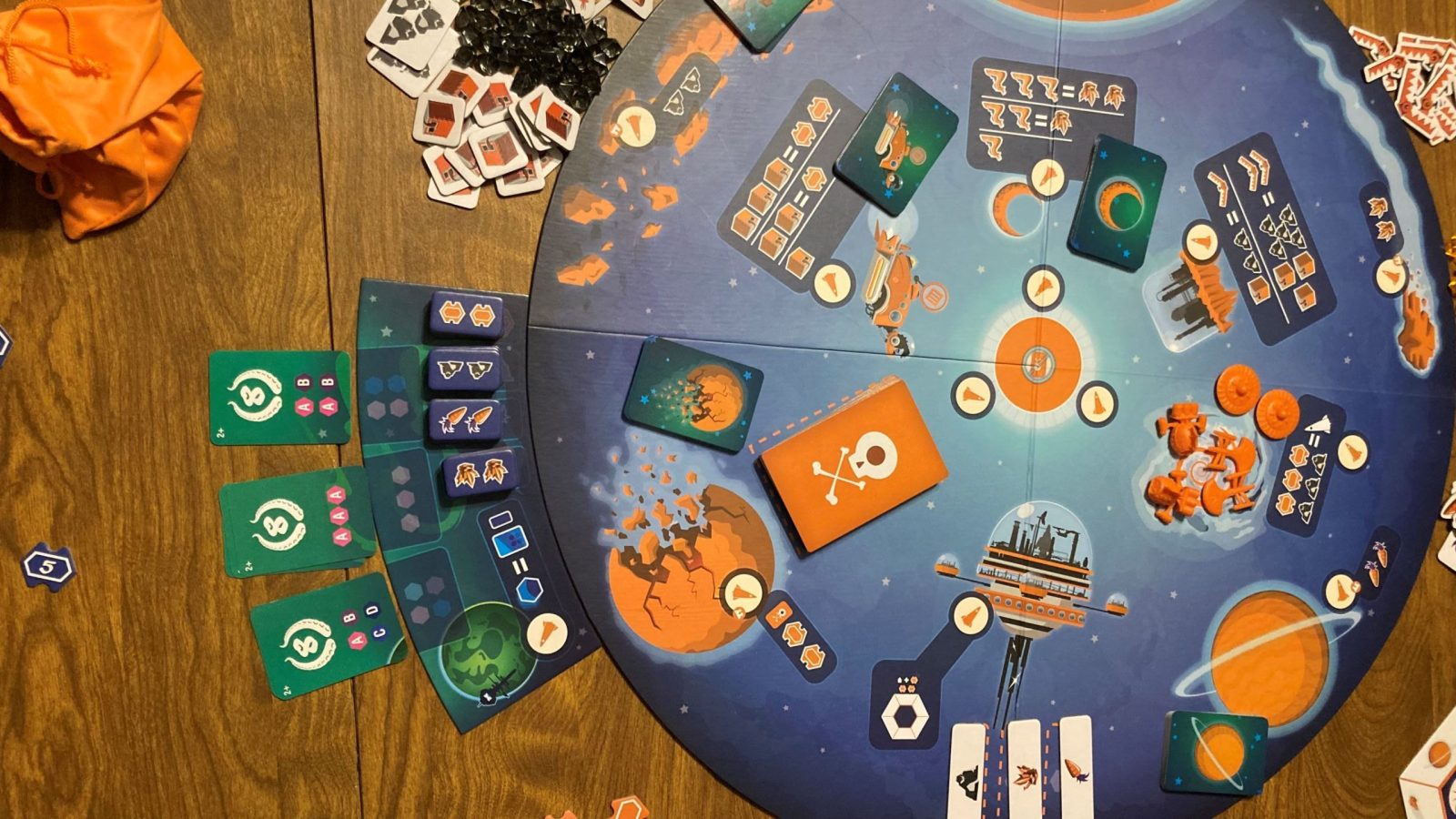 Along with Sagan Colony and the Trobots, the Trobil Makers expansion comes with card decks corresponding to resource-gathering locations on the main game board. When a player arrives at a location that has at least one Trobot, that player can spend a crystal to take the capture action, then pay an additional crystal per Trobot they wish to take at that location. If the player captures at least one Trobil, they can then take the top card from the location deck and follow the instructions.

The location decks are one of the most important parts of the expansion. The cards are positive exclusively for the player that draws them and range from single-use rule-altering cards to endgame scoring modifiers a la the city cards at the bottom of the Trobil deck to straight-up victory points. You can only take a card when you capture at least one Trobot at the corresponding location.

One of the most important decisions that the Trobil Makers expansion introduces is how to handle the new way of getting victory points. The Sagan cards gained from turning in Trobots carry victory point values so they will help players in endgame scoring. However, the cards are arranged in descending order starting at eight victory points leading to diminishing returns as the game progresses. Higher player counts have more Sagan cards, but the highest value is always eight.

This is in contrast to the standard Trobil deck that varies from as little as four points up to 12 and they come out in random fashion. This makes the decision of when to pivot from pursuing Trobots to catching Trobils critical to a player’s chances of winning. 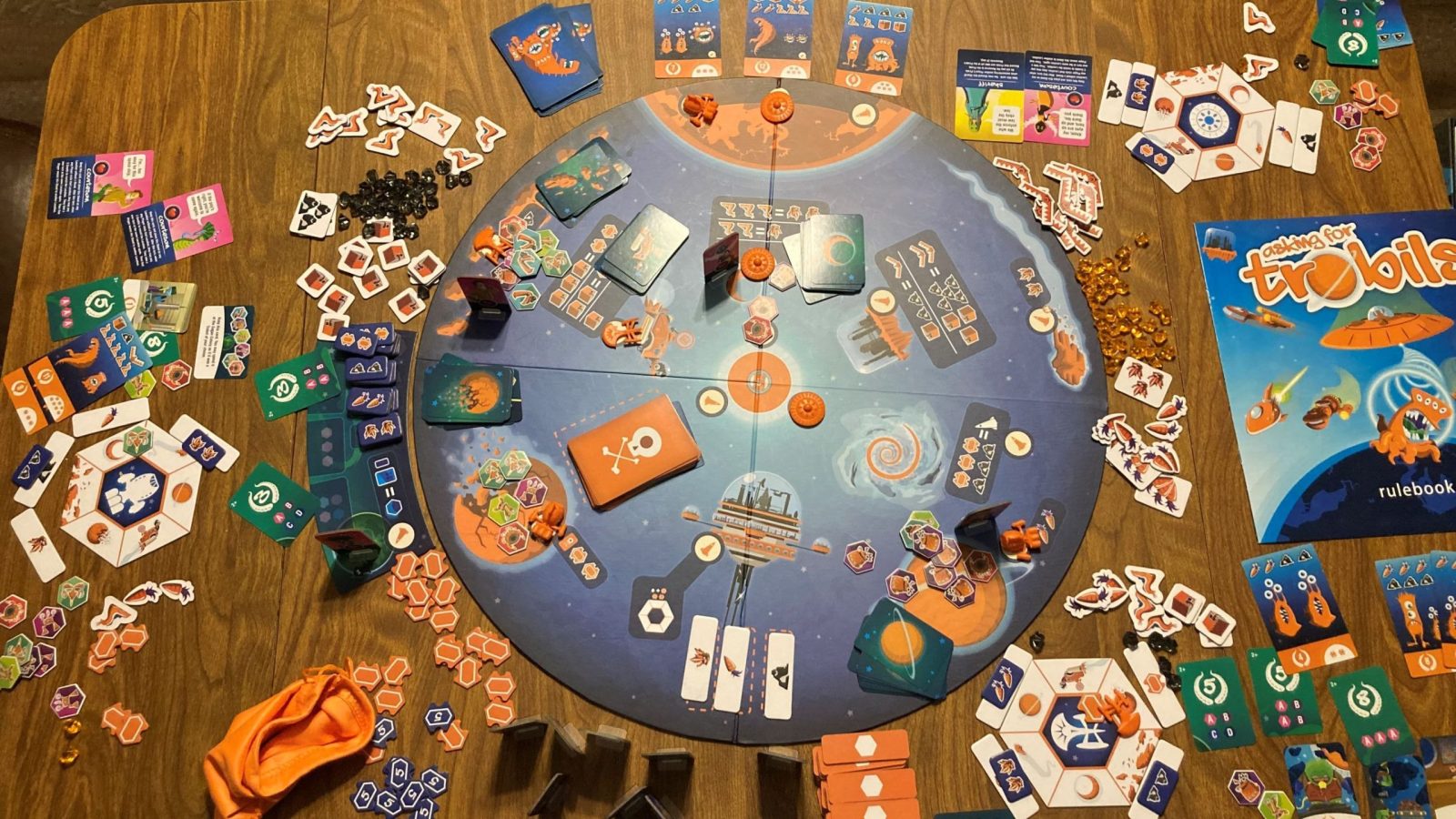 The one major drawback to Trobil Makers is that the Sagan Colony location adds on to a base game that already deals with table creep. Also, you place the location decks at each location on the board, adding to the amount of stuff. Then as the game progresses and players begin to pivot from pursuing Trobots, the Trobot tokens can begin to pile up on the board, adding to the visual and physical clutter.

Back to the positive side, Trobil Makers continues the trend of the Asking For Trobils game and expansions having easy-to-use and well-written rule books. The base game, Companions, and Trobil Makers all have great rule books that also have a page specially-geared towards players teaching people new to the game.

Also of note, Trobil Makers contains the eighth ship for the game, the Nautilus. The base game has the ship card, but this expansion gives you the actual ship models.

Trobil Makers adds a new layer of strategy to Asking For Trobils as well as new player boons, making for an enjoyable experience. Just be prepared with a playing surface large enough to handle it all and a willingness to tolerate a busy game board.

Jeremy is a freelance writer covering multiple subjects from board games to sports to barbecue. He lives outside of Charlotte, North Carolina with his wife and their three kids. They love to play boards game together, ranging from Qwixx and Azul and Splendor to Lord of the Rings: Journeys in Middle Earth.
Related Articles: Asking for Trobils, Asking For Trobils: Companions, Asking For Trobils: Trobil Makers, Tabletop
Share
Tweet
Share
Submit