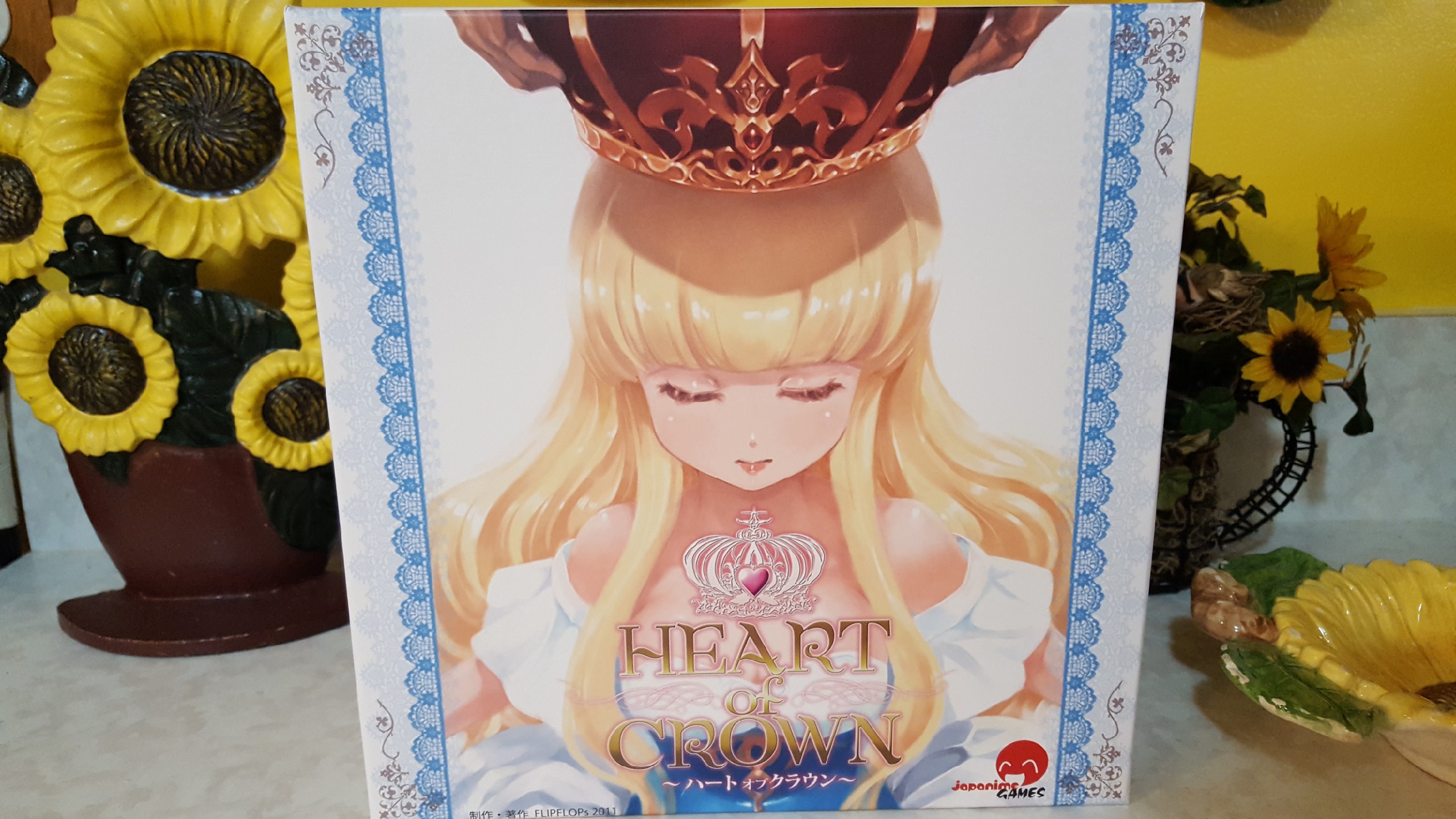 Have you ever wanted the power to back a princess on her journey to become a queen? Heart of Crown gives you that power, so get ready to help her ascend the throne however you can.

Heart of Crown can be played with two to four players, but I focused more on the two player variant. Each player starts with a deck of ten cards: seven farming villages and three apprentice maids. Each player shuffles their deck and then draws five cards to form their hand. Starting every player off the same allows the game to change based on the aforementioned strategy and luck.

During their turn, a player can play as many territory or action cards as they are able to link together. If a card has an arrow on the side or bottom of the card, then it can be linked to another card; this means that another card can be played during that turn. This can be done until there are no cards on the field with arrows that haven’t been used already. Early on, this won’t amount to many cards being played during a turn, but later on, things can get pretty lengthy. For example, my friend was able to pull off turns where he’d play around 20 cards due to linking cards that let him draw more during the turn. At the end of their turn, a player must discard the rest of their hand, along with the cards they played that turn. This causes you to go through the deck quickly, but I like how it makes you think more strategically about your moves. Whenever you run out of cards in the deck, you must shuffle your discard pile and make it your new draw pile. You might not be able to use every card in your hand at once, so you need to plan out what gives you the best results. I had plenty of times where I got bummed that I had to discard some useful cards in my hand, but it adds some tension to the game. 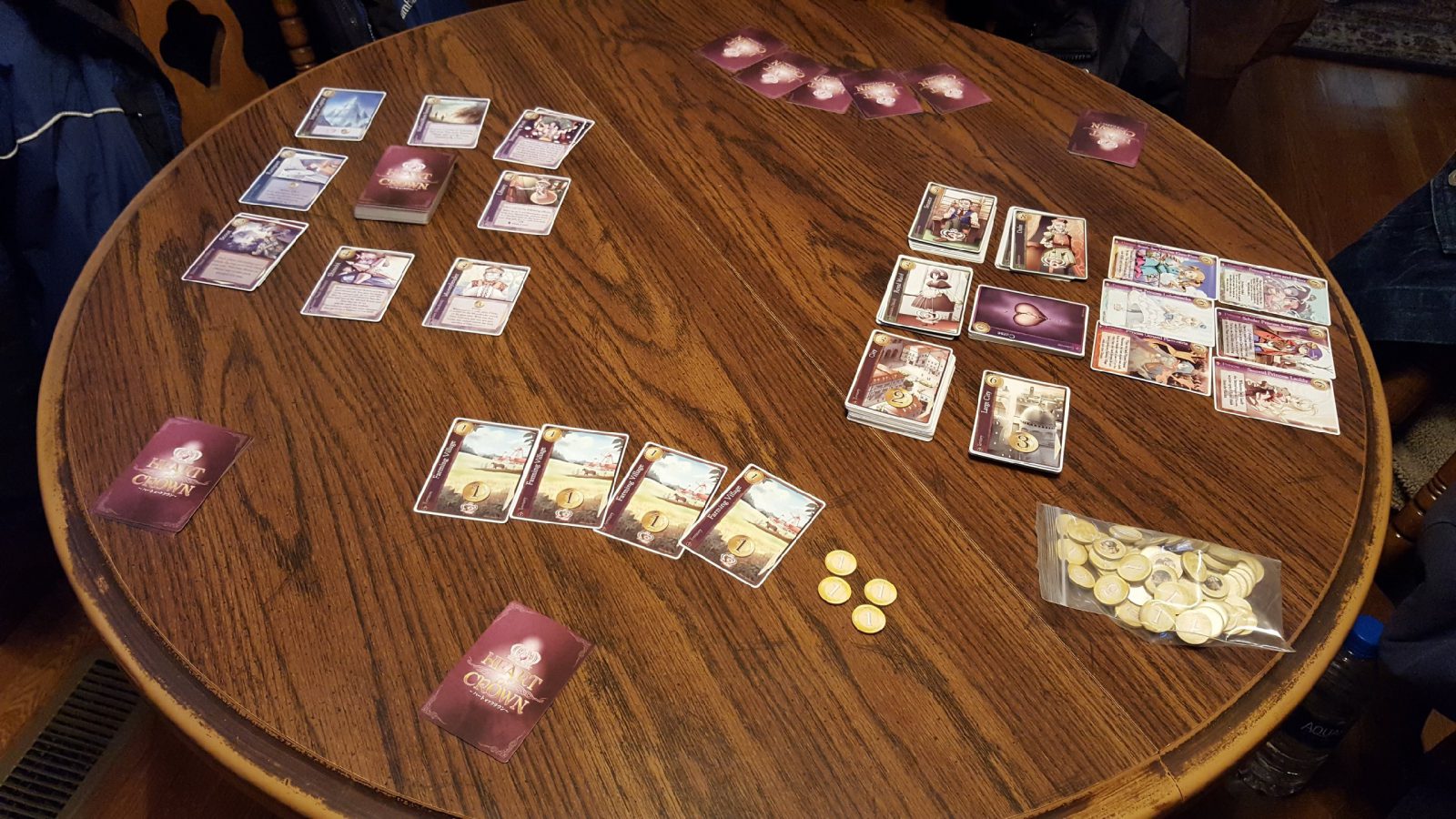 Territory cards such as farming villages, give the player money to use in the markets. Farming villages only give one coin, but better territories such as the city and large city offer two and three coins respectively. They all can link to other cards, so they are great sources of coins. Some action cards also reward the player with coins, which is incredibly useful. Coins are used to buy cards from the main market, the random market, or to activate some special action card effects. Unfortunately, as with your hand, you must discard all of your coins at the end of your turn. So if you have the coins to buy something, you better take advantage of the opportunity, or else you’ll just be wasting those coins on nothing. Nothing is more disappointing than having leftover coins that can’t be used for anything. The cheapest cost of a card is three coins, so having two coins is useless. The markets are locations that you can buy other cards from in order to build up your deck and perform more actions.

Now, in order to achieve your goal of helping a princess become a queen, you need a princess to back. There are six princesses to choose from and they all cost six coins to purchase. You can back a princess at any time as long as you have the coins necessary. Each princess has unique benefits for choosing them, so decide based on what effect would help your strategy the most. For example, one princess lets you take five royal maids from the market as soon as you back her, while another princess reduces all market costs by one coin permanently. I recommend trying out a different princess throughout several playthroughs, as each one will alter how you play the game. When you back a princess, you finally create a domain; your domain is formed by three territory cards that you played that turn with the highest market costs. Those domain cards permanently stay on the field and won’t be discarded. In other words, you lose the possible coin benefits from those cards since you can’t draw them again. On top of that, the farming villages come with a negative succession value. 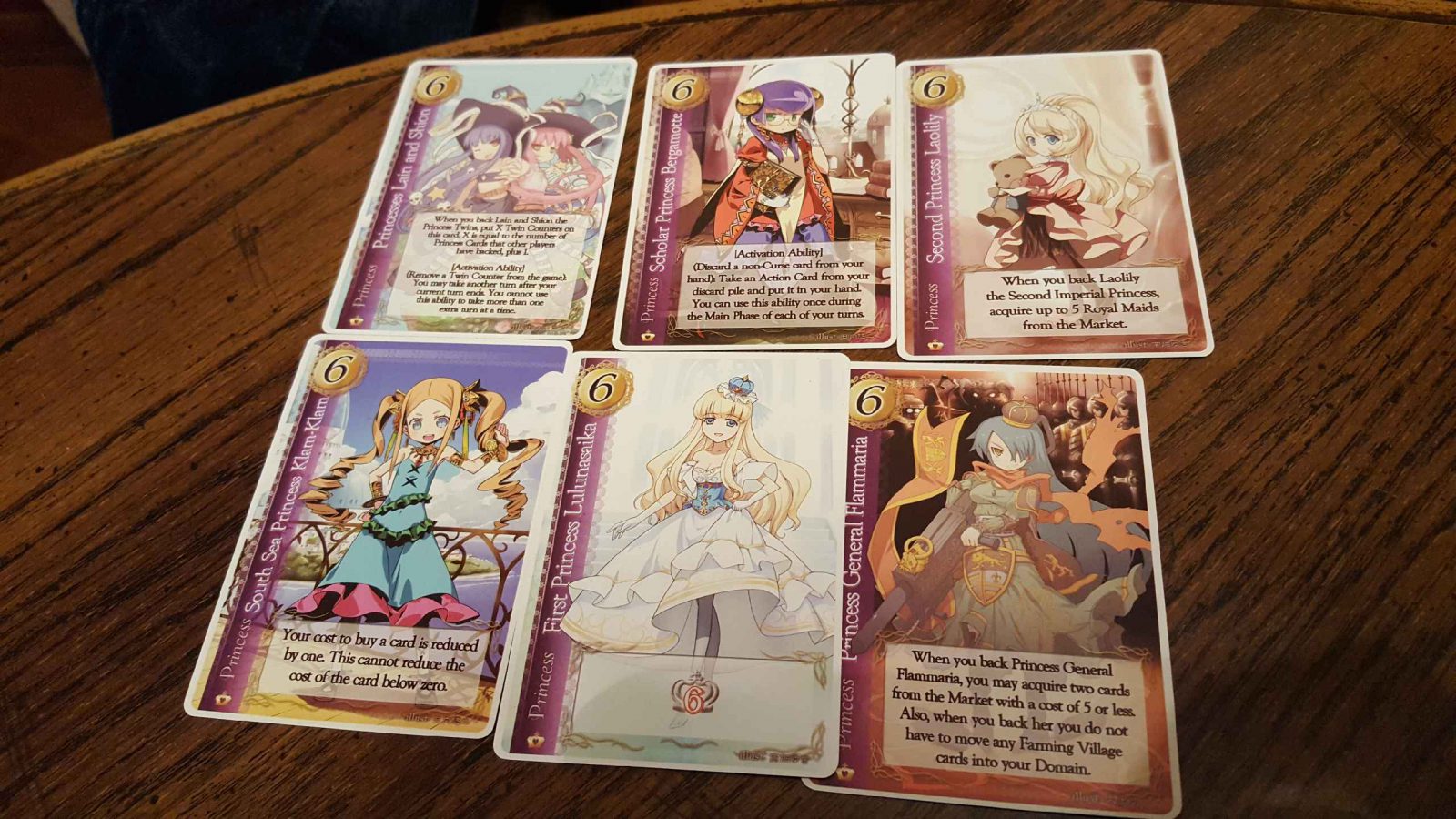 After backing a princess, you’ll need to work on building up your succession points. This is done by playing cards such as the royal maid, senator, or duke. You can play as many succession cards as possible during your turn, but only if you haven’t bought something from the market that turn. You must choose one or the other, you can’t do both. Unlike many other cards, succession cards don’t get discarded after use; they stay in your domain as a part of your kingdom. Once a player hits 20 points, that player declares a coronation ceremony; if no other players can reach 20 points at the end of one last turn, then the announcing player wins. If someone pulls it off, then sudden death goes into effect. This raises the goal to 30 points for an instant win, and anyone that has less than 20 points gets removed from the game. I actually had a game where two of us triggered sudden death. It was very tense as we both rushed to hit 30 before the other person could.

All in all, the gameplay was a fair amount to take in at first, but a little hands-on time is all you need. Once you get the hang of things, the game flows pretty easily and is very enjoyable. The art style and card designs have a cute, anime feel to them, which I love. The illustrations are colorful and beautifully crafted, often causing you to take the time to look them over. The box itself has an angelic air to it, making it feel approachable and accessible: Something about the design feels calming and relaxing. That being said, Heart of Crown is a fantastic deck building game that I highly recommend to anyone interested in that genre of tabletop games. If you like royal and anime aesthetic, you surely won’t be disappointed.

Heart of Crown is a deck building game that revolves around backing a princess to help her become queen. Gameplay takes some hands-on learning, but flows easily. The cute art style is charming, adorable, and endearing.

Codi loves to play video games and watch movies. He will watch almost any kind of movie just to experience them. His ideas take inspiration from the shows and movies he watches, and games he plays. He also loves a good pun.
Related Articles: Heart of Crown, Tabletop
Share
Tweet
Share
Submit