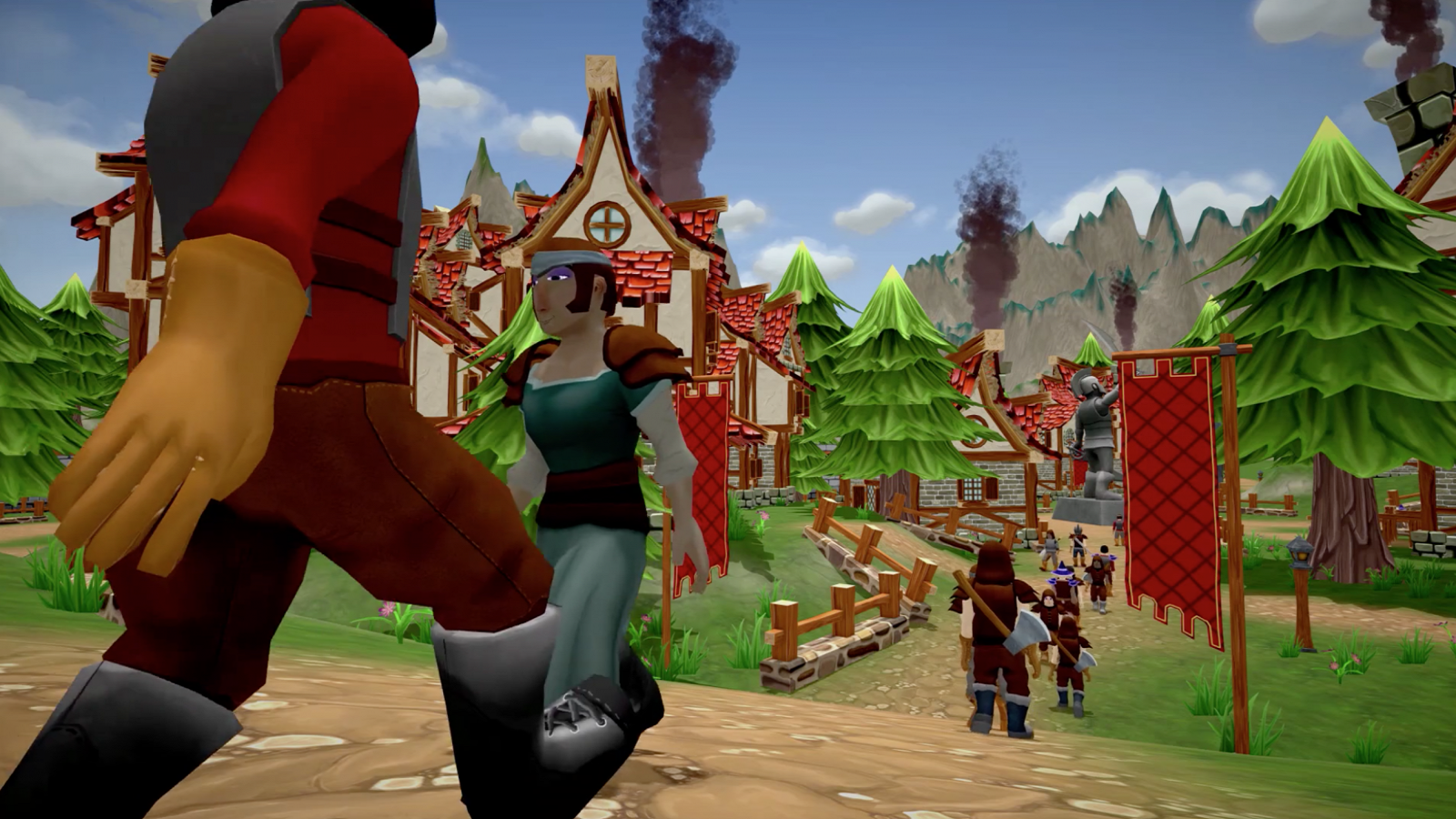 Shoppe Keep 2 is a game that has you maintaining a shop to keep adventurers well-geared. Now, if the developers were going for a realistic take of standing around doing nothing while customers yell at you and destroy your property, then I must say they absolutely nailed it. If they were going for a fun and engaging experience that keeps you interested and engaged, then I’m sad to say it is a failure. Since they were probably aiming for the latter, this simply isn’t a game I can recommend in its current form.

Let’s start with the basics: the game isn’t pretty. While I’m not someone who focuses much on graphics, I find the art style of Shoppe Keep 2 to be underwhelming at best. Everything just looks so generic and boring that nothing kept my attention. The sound design isn’t any better. The music is boring and forgettable and the only sound effect I can even think of is that of the wolves, and that’s only because they make me feel bad since they sound like puppies and keep making noises after they die. It’s like staring at a packed shelf full of similar items. The sounds are all there, but none of them pop out to make themselves known. This is where the developers’ claim of Early Access comes into play. A lot of this stuff can change, but it doesn’t matter at that time. This is the Shoppe Keep 2’s first impression, and it certainly isn’t a good one.

Definetly the greatest store name of all time.

Shoppe Keep 2 might have the worst beginning of any game I have played. There is close to nothing to do when you first start. You have the option of buying water, a mask, and shoes. From the incredible three options you have, you start your shop. (Pro tip: don’t actually bother with the water at all. The people are jerks and will pretty much only buy it for $1 or $2 more than what you pay for it, definitely not worth it.) From there, you sell stuff by setting it on a pedestal, giving it a price, and then walking away. These people are incredibly honest and it is much appreciated. You don’t have to be anywhere near the shop and they will still pay for just about everything. After all, who would want to stand behind a counter all day selling items? I certainly would, since it would actually give me something to do. Walking around the boring town with nothing to do but occasionally walk up to the houses to sell them water because what else are you going to do? Nobody ever does anything and nothing interesting happens.

Nights are the absolute worst. Shoppe Keep 2 mentions that having your shops open at night is a good way to get robbed, so I closed it. When the shop is closed, there is nothing to do. This isn’t an exaggeration. There is literally nothing to do. I wish I was exaggerating for the sake of being funny, then I wouldn’t have almost died of boredom. There has to be random events or something to keep me on my toes and actually give me something to do. I guess I could walk around town a little bit to level up the movement skill. (Oh joy! Another reminder that I live in my bedroom playing video games.)

Buy everything! Or just vanish in a puff of smoke. I guess that works too.

Speaking of skill trees, they are boring and add absolutely nothing of value. I guess it is nice to run faster for longer? The combat skills are pointless since just about everything can be killed by walking backward with the bow. You move at the same pace as most of the enemies when moving backward so they can never touch you and eventually they will die. The ordering discounts are also pretty useless since I pretty much just stopped ordering items once I was finally able to explore outside the city. Once you can, you just kill wolves and collect apples, which all sell for decent prices, and then you make bank since it is pure profit. Shoppe Keep 2 is lacking an important aspect when it comes to these types of games; risk and reward. There is no sense of urgency. There is no real risk to my shop. There is nothing stopping me from getting what I want. Well, nothing outside of how boring it is. There is no enemy for me to deal with, no overlord trying to take over the world, no princess to save. Or, in this case, no customers to deal with. They just walk in and buy stuff or they don’t. Well, more often than not they just disappear in a puff of smoke for no discernible reason. Maybe those are the ones who were thinking about stealing. It would certainly explain why the honor system is so effective.

At the end of the day, Shoppe Keep 2 lacks any sort of depth. Its generic setting and art style, which is matched by the boring combat, make adventuring a total bore. Since running the shop just mean setting items on display and doing nothing, it just isn’t engaging. There needs to be depth. Give me a customer rating. Give customers an actual personality, and then give me ways of dealing with them. Let me interact with things. I want to play the game, but there is nothing to play. I’m more engaged actually working retail, at least I get the chance to increase my movement stat.

It is important to note that Shoppe Keep 2 is still in early access. It is definitely possible they will eventually address my issues with the game, but as it stands, it simply isn’t worth purchasing in its current state. There just isn’t enough content to justify a purchase and what content is there is underwhelming. I do see some potential for the game, but the need for more complex systems that actually make the player engage with the game rather than just run through the motions. Early Access should be used to grow your already solid game based on consumer feedback; not release a clearly unfinished product that has only the outline of a game.

Austin Fern has been playing video games his entire life. The first console he truly fell in love with is the PlayStation 2 with Sly Cooper, God of War, and many others really leaving an impression. He enjoys all genres of games from FarCry 5 to Danganronpa and everything in between.
Related Articles: Indies, Shoppe Keep 2
Share
Tweet
Share
Submit