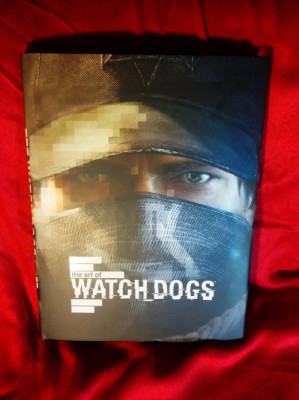 If you read my review of Watch Dogs you know that I enjoyed the hacking culture of the game quite a bit. It, like other Titan Books productions, is a collection of some of the incredible artwork behind the top games coming out of the industry. Penned by Andy McVittie (you might recall that he wrote the companion pieces for The Art of Assassin’s Creed III and The Art of Titanfall, the book is split into four sections entitled Dramatis Personae, The Living City, The Underground, and Everything is Connected. With a co-authored forward by Art Directors Mathieu Leduc and Sidonie Weber, The Art of Watch Dogs takes us on a journey through the lengthy development of one Ubisoft’s newest hit franchise.

Dramatis Personae covers, as you might expect, the different characters that Aiden encounters in the course of Watch Dogs. It shows off exactly what I love about artbooks, giving alternate looks that Ubisoft experimented with for Aiden, Clara, Defalt, Jordi Chin, T-Bone Grady, Iraq, Lucky Quinn, Poppy, and many more characters. While secondary characters don’t get as much love, the quality of the renders and artwork is absolutely stunning.

In Chapter 2, we get the embodiment of what Ubisoft was aiming for with Watch Dogs – a living city where everything is connected. This section features some of the early gritty art concepts, but also discusses the variety of locations, technology, and architectural integrity the art team wanted to deliver. Familiar locations like the gunshop with the cannons outside, a local bar where I became Mayor after a ton of visits to complete the drinking game, and the Proviblue Bank are shown here as concept, but their translation to the final game was shockingly direct. From the glossy storefronts of the Mad Mile to the grimy alleyways in the Wards, the look and tone of Chicago is brought to life.

You just can’t have a router login prompt without an ASCII MOTD (Message of the Day). The Dedsec folks are full believers in this, and Chapter 3 of the book shows off a great deal of the edgy graffiti-esque digital tags present in every glitch and shifted pixel. Pushing further into the real world, there are also distressed neighborhood murals with religious, sexy, family, or anti-establishment overtones. Territorial gang signs and stencil art are equally represented. Even if you don’t stop and look at these pieces of ancillary art, they are a crucial part of each and every neighborhood.

The fourth and final chapter of The Art of Watch Dogs focuses on the true enemy of the game – Blume’s ctOS. Showing off concept art that showcases the feeling that Ubisoft Montreal was aiming to bring to life since the first showing at E3, this section gives us a look at some of the iconography and logos used in the game. It also shows some familiar artwork/screenshots that made up the heart and soul of what the game would become.

The mark of a good product is that it leaves you wanting more when you reach the end. In this case, I felt like there are some incredible CGI renders of the various characters, but I would have loved to have seen earlier concepts for each of them. A large portion of the book focuses on the architecture and cityscape that represents the Watch Dogs version of Chicago, but it seems to come at the expense of size. The most interesting pieces are relegated to small thumbnails. The fourth chapter is the most disappointing, showcasing screenshots that we’ve posted in much larger resolution here at Gaming Trend. It would have been nice to see some of the other concept pieces that helped develop Aiden’s persona and technological prowess.

All in all, we’ve seen better art collections from Titan. The Art of Watch Dogs turns in a decent performance, and what it does deliver it does well, but I was left wishing there was a greater focus on the road from 2009 to release instead of just the final product.