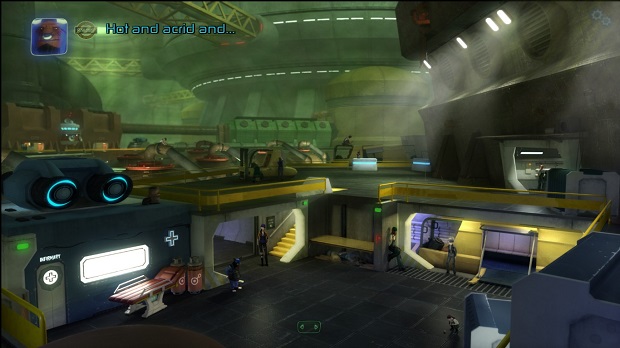 I will admit, my first impression of this game, and thus of the AR-K series in general, was not very favorable. I haven’t played the first two episodes, so in the interest of fairness, I did some article-reading and YouTube-watching to learn more about them before I could feel comfortable starting my review of episode three, The Great Escape.

The AR-K series are point-and-click adventure games by indie developers at Gato Salvaje Studio. The protagonist of the series is Alicia Van Volish, a headstrong young woman with a thirst for justice. In the first two games, you follow a slightly convoluted narrative about a mysterious golden sphere showing up in Alicia’s possession, which gets her arrested and interferes with her dream of becoming a cop. She chooses to study journalism instead, because to her it’s still a chance to fight for the truth, but her professor is a total bully and trying to keep her from passing his class. Her best friend is a talking bull named Franky, and she’s sleeping with a man named Blaine who may or may not be evil. (There’s a lot of other weird stuff, but I’ve cut out most of the fluff.)

Want to set an otherwise normal story in space? Throw in an alien race of talking bulls and name the protagonist’s dog Ambar.

Just from the sound of it, episodes one and two weren’t very polished, and the opening of episode three displays that clearly. When you start The Great Escape, there’s a cutscene of a TV screen which attempts to summarize the previous two games in a choppy and hardly cohesive montage. I thought I just wasn’t paying enough attention, but episodes one and two really are as sloppily constructed as they are depicted.

After you’re done watching TV, you see Alicia chasing the sphere down a chute, only to land in a trash compactor. Once you can successfully splint her leg and create enough light to find the exit, the story begins.

The series takes place within a space center called the AR-K. Up until this point, it has been common knowledge that there are seven districts on the AR-K. In The Great Escape, you learn that while Alicia’s been living in the utopian District One, the polluted dystopia that is District Eight has been carefully hidden from the population at large.

Dwellings in District Eight are pretty small and sparse.

Alicia also discovers that her beaux, Blaine, is a twin and his first name is actually Sascha. His brother, Grigor Blaine, is still living in the house they shared throughout their childhood. It’s been 10 years since Sascha managed to escape District Eight, and Grigor has given up hope that he’ll get out himself or ever hear from his brother again. Then Alicia shows up and he readily partners with her because it could mean finally reuniting with Sascha.

You go on to meet several other interesting characters, including a few perfunctory aliens and a fourth wall-breaking NPC, and you even get caught up in a murder mystery. After a hiccup or two in the beginning, the story becomes absolutely captivating, and you find yourself wanting to exhaust all of the dialogue options whether they’re related to a quest or not.

When you record your interviews with the murder witnesses, you can listen to them again at any time by visiting this lineup.

The story is without a doubt what shines the most in this game. Unfortunately, it is paired with dated graphics, clunky animation, and fairly broken cutscenes. These factors don’t totally weigh it down, but at the same time, the narrative can’t completely overshadow them.

As you may have gathered, The Great Escape is overall an improvement from the previous games. Both of the prior episodes are set in the same general area, so you aren’t treated to much variety, and utilize the same art style, which was pretty bad. The puzzles may always be a challenging component in point-and-click adventures, but in the first two episodes they could be nearly nonsensical.

One of your tasks is to build a girlfriend for a skeleton who guards the canal. Don’t ask.

Some of the essential gameplay elements have changed with time as well. In the original version of the first game, everyone inexplicably has English accents, but a later re-release replaced them all with American ones to match the other games. In the second game, there is a narrator describing what Alicia is doing and thinking, and you are able to store ideas as well as items in your inventory. Both of these games let you choose what Alicia is going to say next during dialogues.

In The Great Escape, you can chat about different conversational topics, but you can’t pick from a set of response options. You also have a PDA, which you can use to contact Alicia’s pal Franky at any time. Suffice it to say, the AR-K series has gone through a serious identity crisis.

My investment in the current story is what’s made me want to push on through. I would venture to say that snagging big names like Ash Sroka, a voice actress from the Mass Effect trilogy, and comic writer Greg Rucka has been most of what’s salvaged this series. I don’t know if I would say I’m excited about the promised fourth episode, but I am at least curious about it and whether this upward trajectory will continue.

The Great Escape is proof that the AR-K series has the potential to get better as it progresses. The graphics and voice acting are a step up, but it’s the story that has improved by leaps and bounds. Not only does it make more sense now, but it is the most persuasive argument for getting you to try the game in the first place.

Sarah Marchant is an office admin for a nerdy t-shirt company. She has a soft spot for indie games, a passion for story-driven titles, and a weakness for cooking games and anything with zombies.
Related Articles: AR-K: The Great Escape
Share
Tweet
Share
Submit