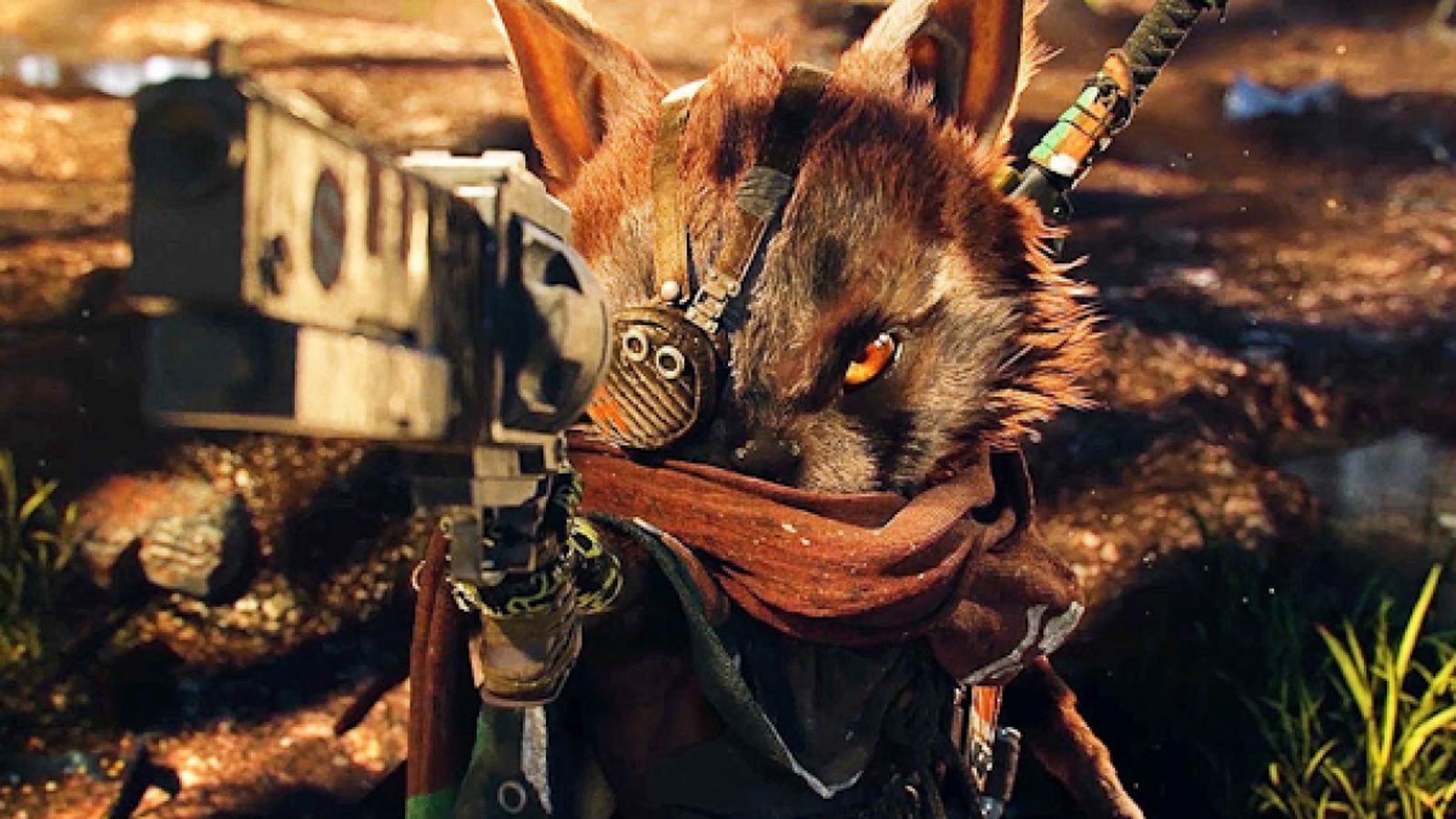 If you were to ask me what Biomutant is about, I would have a hard time pinning it down. At its core, it’s about a post-apocalyptic world where mutated creatures have inherited the Earth, formed tribes, and now war against one another. You are one of these creatures, aiming beyond the petty squabbles and trying to stop an armageddon event. Beyond that, it’s a mashup of Horizon: Zero Dawn, Devil May Cry, The Legend of Zelda: Breath of the Wild, Borderlands, and a whole lot of others. With a laundry list of influences, Biomutant is a lot of things. Let’s dig into the details and figure out if that mishmash of genres and gameplay mechanics works.

Before we set out into the wide open world of Biomutant, we’ll need to make our character. While we almost exclusively saw a single look for the protagonist in the trailers and gameplay leading up to launch, you’ll likely end up looking nothing like that little beastie. Instead, you’ll start off your creation picking between strength, agility, vitality, charisma, and intellect. These have a direct correlation to vitality (health and armor), strength (melee damage), intellect (power, Ki energy, and energy regen), agility (movement speed), charisma (barter effectiveness), and luck (critical and loot chances). As you roll your left thumbstick through these options, your creature will morph and change. A creature with a high intellect will have a larger head, whereas higher vitality will make you more squat and beefy. Strength puts meat on your bones, and charisma makes your head wide, for some reason. 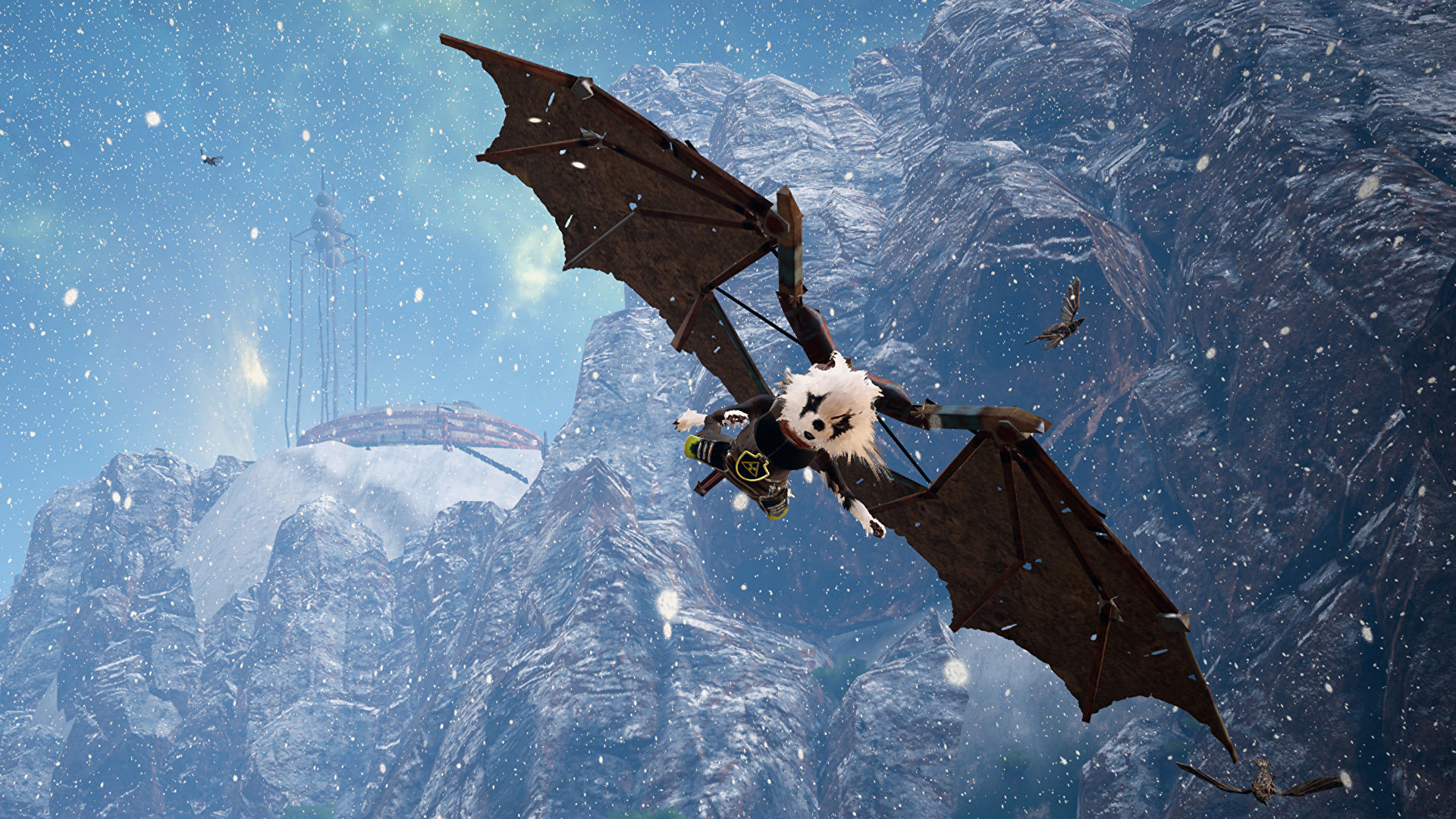 Beyond the primary stats, you’ll also choose your breed of anthropomorphic critter — there are six to choose from, each altering the overall look of your character a bit while adding additional bumps or dips to your overall stats accordingly. Finally, you’ll select your class. There are five in the game, with a sixth available if you happened to preorder. These archetypes are truly the differentiators in the game as they’ll set your initial abilities and overall play style, and they couldn’t be more different. Dead-Eye characters have an amazing skill, able to reload instantly and doing 20% additional damage for their next magazine. Commando types are range specialists, with their guns doing 10% more damage to targets. Psi-Freak’s are able to throw a ball of lightning, giving their foes a good jolt from a distance. Saboteur’s are dual wielders, able to use two one-handed weapons simultaneously. Sentinels are all-arounders with additional base armor to keep them out of trouble.

Beyond all of these choices you’ll find the most important one — the colors of your critter. Using a wheel with the entire color gamut and brightness settings, you’ll decide if you want your creature to look badass with black and silver, or if you want to stick out like a bright pink and orange road cone. It’s entirely cosmetic, but make your mutant unique — you’ll be spending a lot of time with them — about 25 hours from start to finish.  Let’s take a look at the first hour in 4K at max settings running on an RTX 3080.

After completing a quick tutorial, you are off to the races. The game essentially stops holding your hand, instead gating the areas with powers or levels. Unless there’s a hard block, it’s likely you could go essentially wherever you want. This is simultaneously the best and worst part of the game. I found myself shortly very far afield of where I should have been, doing side quests in areas I didn’t belong in, eschewing the main story. I backtracked with the generous fast-travel system and put myself on track, but it speaks to a lack of direction that creeps into the game at times.

The first of a great many decisions you’ll make in the game is what tribe to align with, and with it the game introduces the morality system. Any decisions you make can affect your light or dark alignment. Ultimately these culminate in the macro decision whether to save the central Tree of Life or to help destroy it, or they should. Instead, they function to unlock specific Psi powers on one side or the other. This feels like a feature that was planned to be something more ambitious, but ended up being somewhat abandoned. 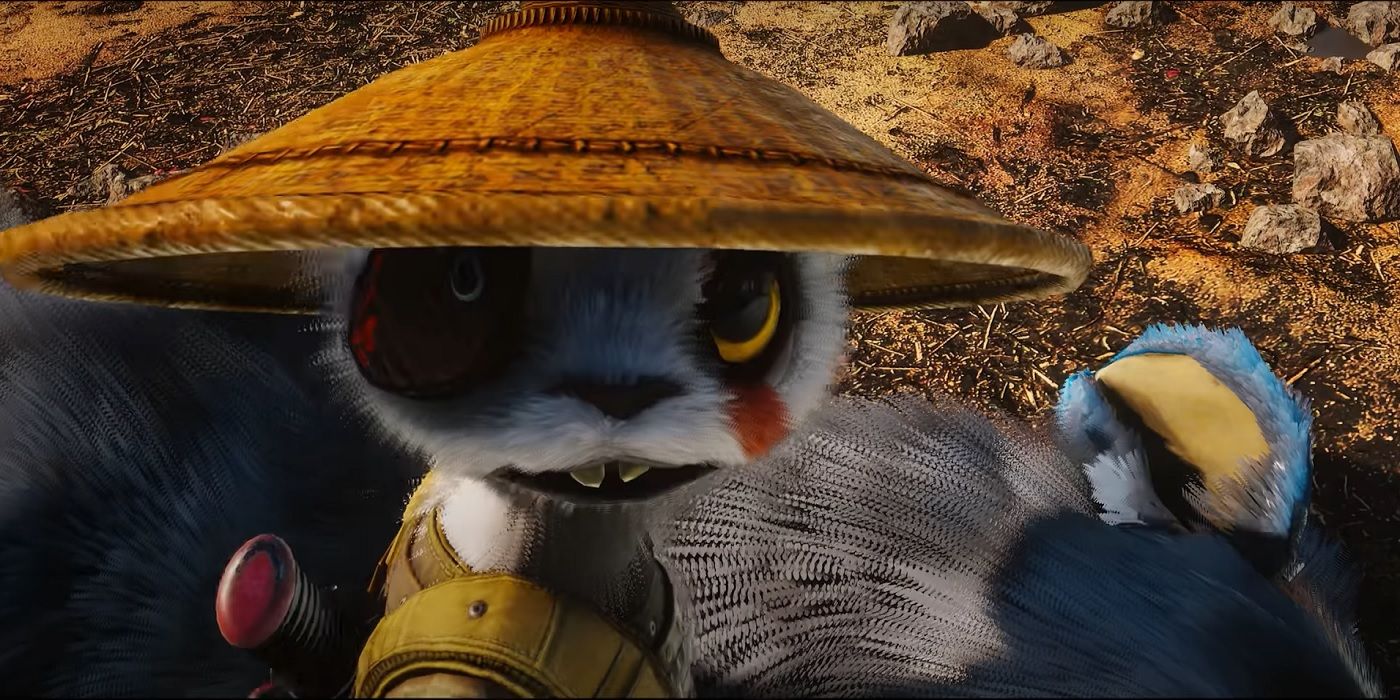 Aligning with a specific tribe means taking down the other one, and that’s going to lead you to the enemy gates. Each base has a limited number of sequences you can execute to take it down, ranging from all-out assault to using insects to drive out the enemy without firing a shot. In the first few hours these are fresh and unique, but towards the end you’ll see these sequences repeat a bit.

There are four massive bosses (with entirely too-cute names like “Porky Puff”) that will need to be addressed to save or destroy the Tree of Life. Frankly, they are just too big for you to take on by yourself, so you’ll need to gather up some unique vehicles to help do the job. I don’t want to ruin these for you, but they do reveal another repeated pattern. Even if you are given a base vehicle, you’ll need to collect various parts to build them up to take on the boss, perform a specific ritual, and then you can take them on. The fights are a blast, and I enjoyed every one of them — the running around searching for the parts, less so.

Speaking of weapons and collecting, weapons in Biomutant are a bit of what you make them. After an hour or two you’ll likely start to feel like you are behind the power curve, and that’s because you ignored the incredibly deep weapon and armor crafting system. I don’t know why you did that, but let’s talk about it, ok? Nearly every weapon in Biomutant, much like the creatures themselves, are an amalgamation of other things. 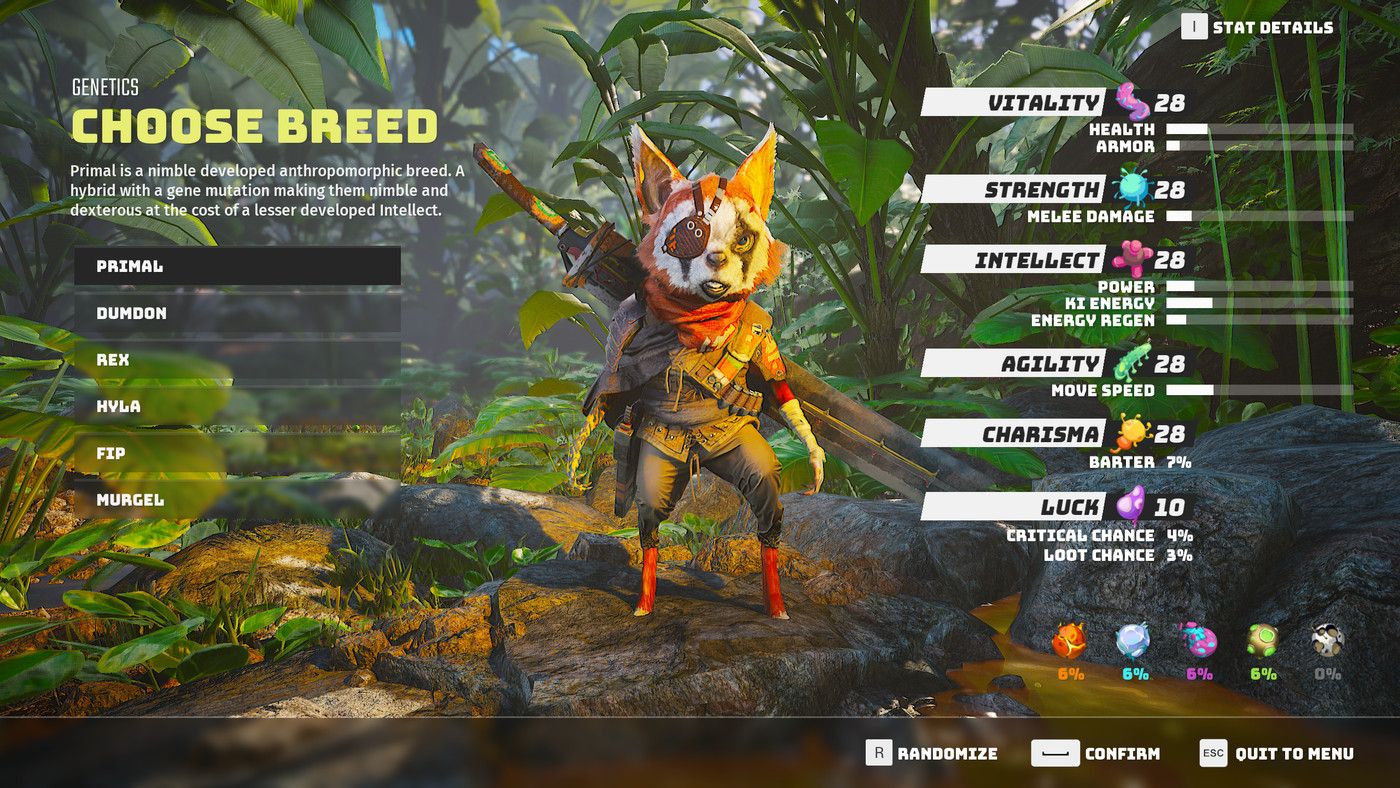 Every gun, sword, and piece of armor is junk slapped together to make something better. Using an MMO-like rarity system, every piece of a weapon or armor has a rarity and attributes associated with them. Swapping out the handle, body, trigger type, materials, and more can modify the type of damage, amount, armor piercing, fire rate, accuracy, range, reload speed, critical chance, and any special attributes that weapon has. Armor similarly upgrades with various resistances emphasized — a key to gaining damage-free access to places like the radioactive zones. There are nine slots for gear, and five slots to save your favorite combinations, so you’ll have plenty to juggle.

As you level up you’ll gain attribute points to allocate, but you’ll also unlock perks. These powers are expansive, giving you access to skills that can help you dispatch foes with abandon. Lobbing fireballs into somebody’s face after you just froze everyone around you is rude, but highly effective. Frankly there are so many to choose from that it’s hard to even encapsulate them here — I cannot imagine the pain of balancing them all, but suffice it to say there are more than a few that will match whatever your playstyle happens to be.

Combat in Biomutant is a feat unto itself. If you want to play this game as a brawler, it’s here for you. Want to focus on ranged high-volume guns? Do it. Grenade launchers and daggers? Yes and yes. Magical rat wizard? That looks great on you. Whatever your playstyle, it’s represented and all folds into a paper/rock/scissors resistance system that, unlike many games, actually matters. Paying attention to what’s in front of you, and what weaknesses they possess, while paying attention to your own, is key to survival. I made a comparison to Devil May Cry, and it’s most likely the most direct comparison when it comes to fighting. Melee and ranged attacks mix together with the aforementioned skills and perks to create a character that is uniquely your own. 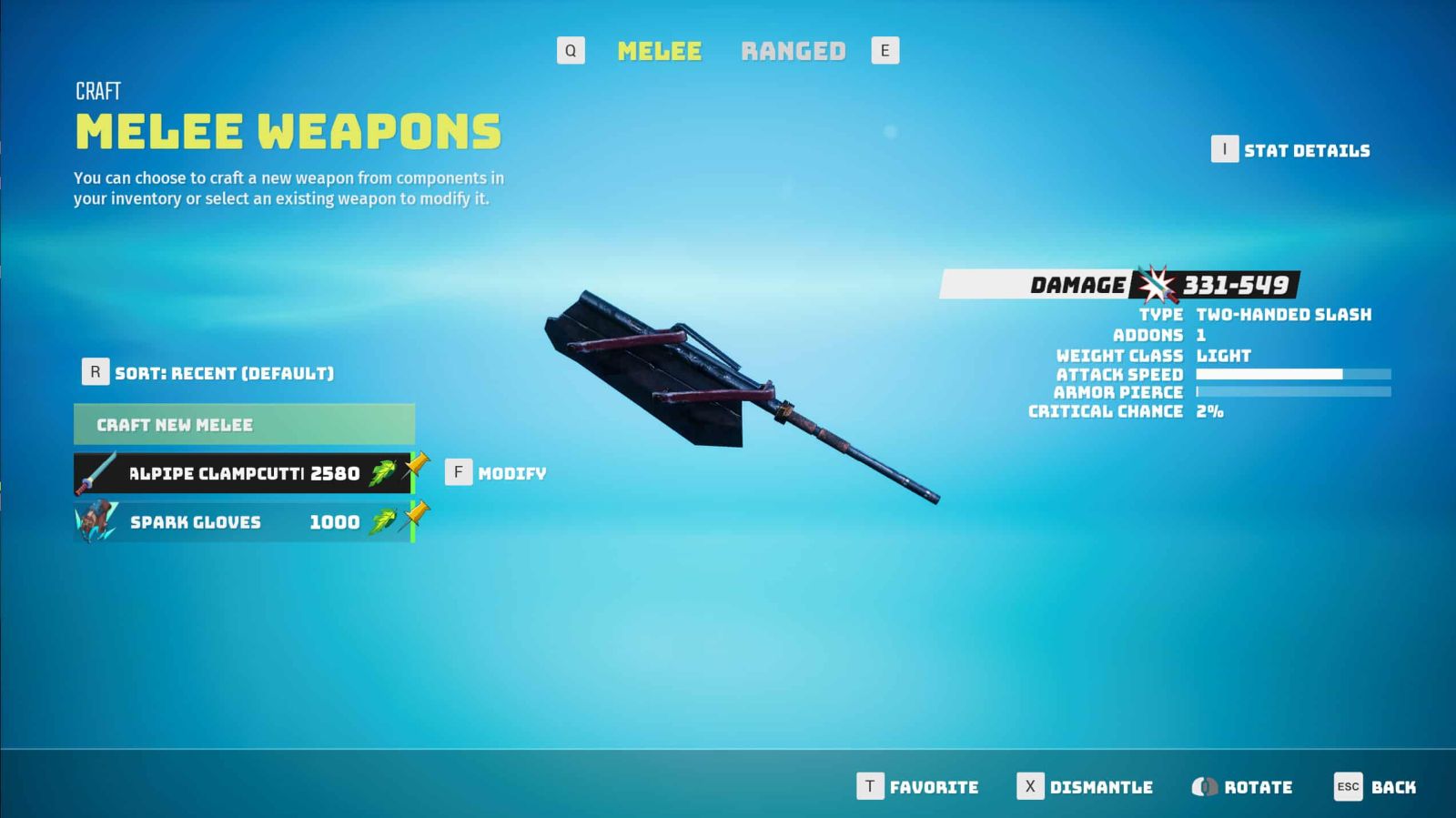 Even enemies feel like they are cobbled together from other foes. Many match your protagonist archetypes, but they are also unique. Better still, there is no telling when you’ll stumble upon them fighting amongst themselves. Big sub-boss creatures roam the land as well, and you’ll encounter them frequently. Frankly, I’m not sure if the team designed hundreds of critters, or if they are being randomly generated, but wow, is there variety.

Visually, Biomutant is absolutely stunning. The sense of scale is awe-inspiring, and on PC the draw distances are breathtaking. Looking out over a cliff I can see an abandoned overgrown dam. Looking in another direction I can see the massive Tree of Life, its tentacle-like roots crawling the landscape into the distance. Like Breath of the Wild, each area looks and feels unique, with all of them bringing fresh threats and challenges. Whether it’s dealing with the overbright and dangerous radioactive zones, the smouldering deserts, or the lush and beautiful forests, Biomutant is beautiful.

The story of Biomutant is told almost like a Chinese action movie. Frequently your character will stop in the middle of the story and think back to a time past where he learned about a specific move set or gained an item of significance. The names of creatures and places are often a combination of gibberish and how a child might pronounce things — it very much reminded me of the kids in Mad Max: Beyond Thunderdome. 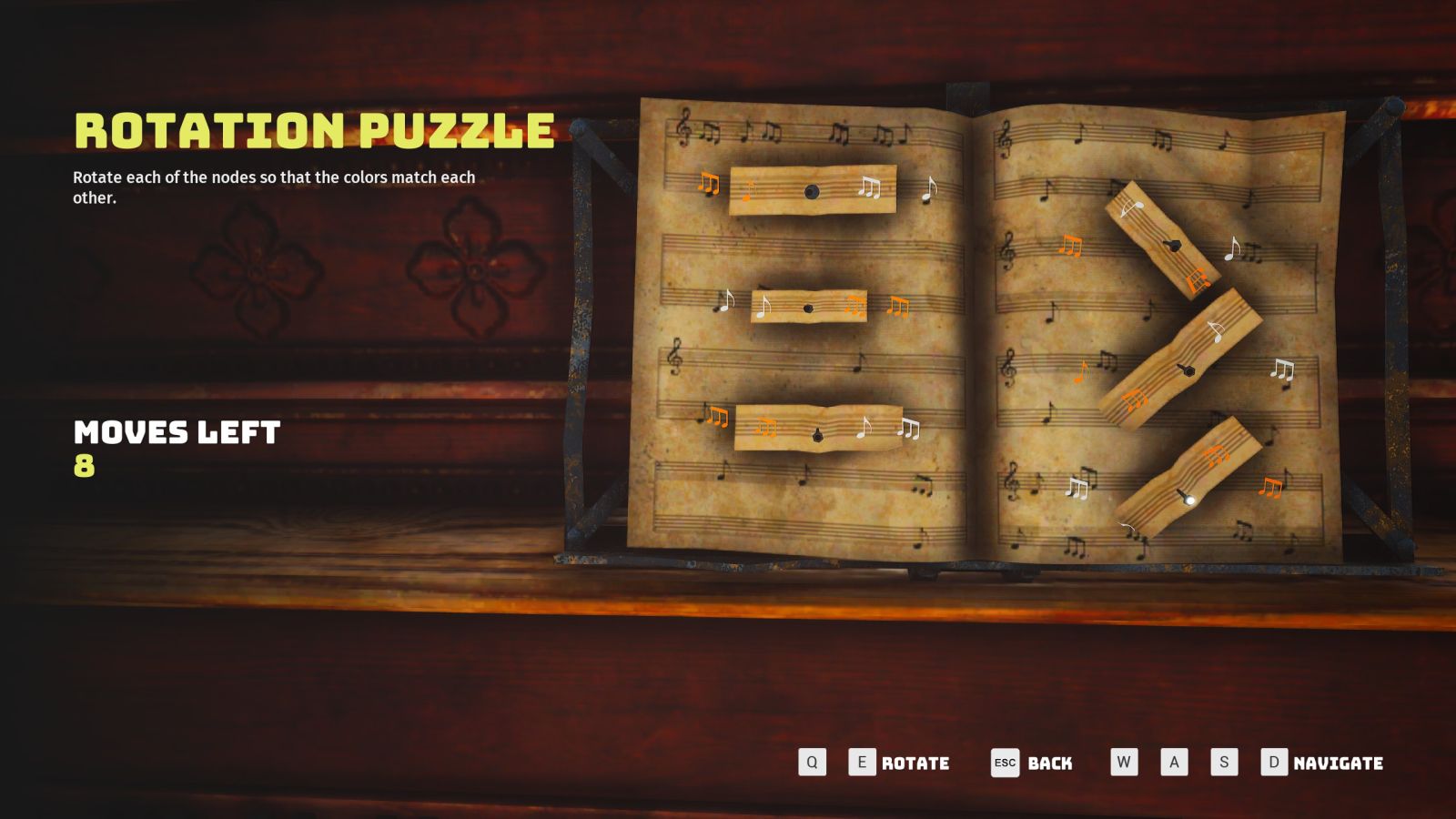 The narrator telling your story is going to be a divisive element as he is persistent. He’s telling your story as it happens, so he’ll be translating the creature language you hear, talking about the things you discover, and generally talking through the course of the game. You can adjust this down a bit, but for me it’s part of the overall charm of the game. It’s a little like having a book read to you, and it fits the strange aesthetic of the world where Biomutant happens.

With rich puzzles, crazy creature design, engaging combat, laugh out loud funny moments (I see you 50’s greaser style Elvis-like ferret!), an engrossing crafting system, character upgrades, Wung-Fu powered super moves, a morality system, 15 perks, and RNG-powered loot drops, Biomutant has it all. This is the best, and also the worst thing about it. The ambitious nature of this title is absolutely staggering. It does a LOT, and it does all of it reasonably well, but none of it great. Developer Experiment 101 have brought together so many elements, it’s a miracle any of it works. Like the weapons I’ve cobbled together, they get the job done, and that’s about it. 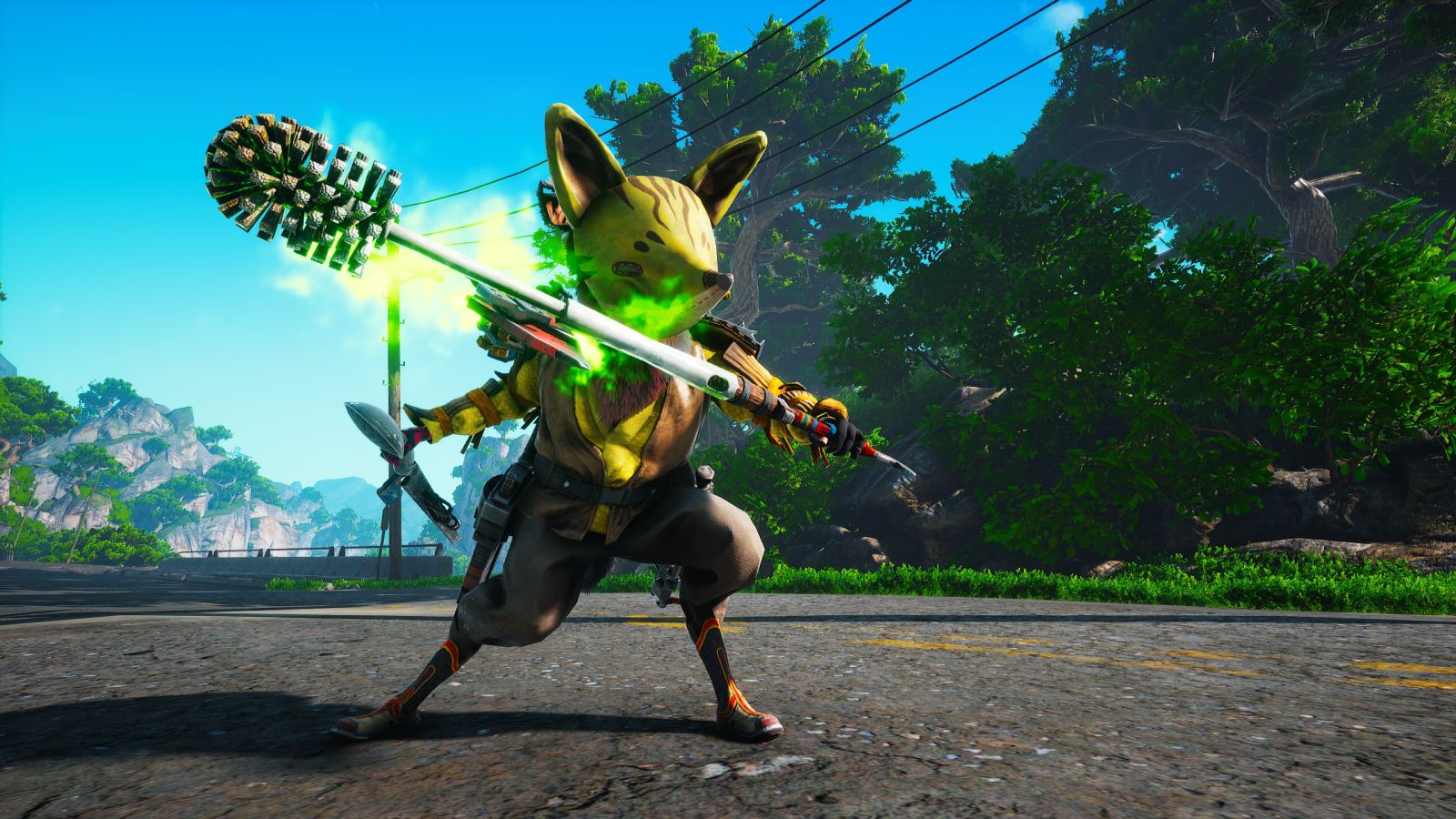 Riddled with repetition, Biomutant is as grand in ambition as it is bland in execution. Where it shines in character creation and choice, it fumbles in its narrative and empty morality system. Where building your powers, weapons, and toys is great, finding all the parts to do so is simply a chore. Odd to say, but in this case, less might have been more, but what is here is fun. Just not as fun as it could have been.

Ron Burke is the Editor in Chief for Gaming Trend. Currently living in Fort Worth, Texas, Ron is an old-school gamer who enjoys CRPGs, action/adventure, platformers, music games, and has recently gotten into tabletop gaming. Ron is also a fourth degree black belt, with a Master's rank in Matsumura Seito Shōrin-ryū, Moo Duk Kwan Tang Soo Do, Universal Tang Soo Do Alliance, and International Tang Soo Do Federation. He also holds ranks in several other styles in his search to be a well-rounded fighter. Ron has been married to Gaming Trend Editor, Laura Burke, for 21 years. They have three dogs - Pazuzu (Irish Terrier), Atë, and Calliope (both Australian Kelpie/Pit Bull mixes).
Related Articles: Biomutant, Let's Play
Share
Tweet
Share
Submit