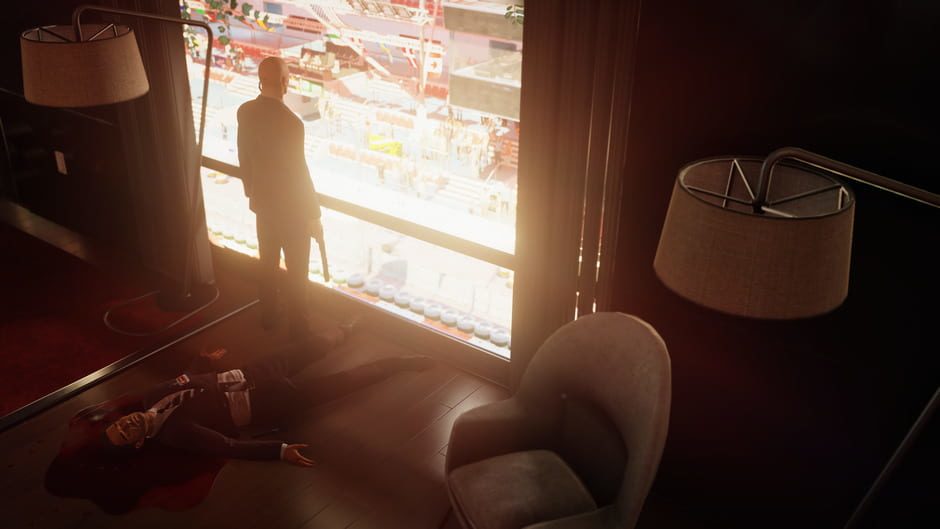 When Hitman (2016) was announced as an episodic game developed by a studio I’d never heard of called IO Interactive, I was skeptical, to say the least. To my surprise, that game brought a fresh new take to a franchise that had gotten stale and ended up being one of my favorite games of the year. In the years since, IO Interactive has purchased their independence and the Hitman franchise to boot. Now, they’ve created Hitman 2, which picks up right where the previous Hitman game left off. While the latest entry in the franchise does little to improve upon the previous title, it succeeds in providing more of the Hitman experience that fans have been craving.

Hitman 2 once again places you in the shoes of Agent 47, a nameless, unempathetic assassin who has been trained as a contract killer since he was a child. Hitman (2016) explored the roots of Agent 47’s creation, and the mysterious history by which he was raised to be a lethal weapon, but ultimately left us with more questions than answers. Hitman 2 attempts to close the loop on many of those mysteries as Agent 47 tracks down “the shadow client,” who has been secretly pulling the strings for some time and who seems to have insight into Agent 47’s beginnings. Along the way, Agent 47 has to stab, shoot, and strangle his way to the truth.

While the premise of the story is pretty compelling, the execution, sadly, falls short. Most notably, Hitman 2 does away with the cutscenes in the first game and replaces them with still screenshots with voiceover done over them. The voice-acting is great, but the lack of full cutscenes makes the game feel very low-budget and makes it a lot more tempting to simply skip or ignore the whole thing. It’s a shame, because I found myself interested in seeing how Hitman 2’s story played out. It would have been great if IO Interactive would have put the effort in presenting the story at a level that the game deserves, but clearly, this was not a priority for them.

In between the disappointing cutscenes, though, you’re dropped into one of six new locations and are tasked with eliminating one or more targets, which is where the game really shines. Getting close enough to a target to take them out, especially if you intend to do so discreetly, can be incredibly challenging and require tons of planning to pull off. Doing so requires becoming a master of stealth, deploying the use of disguises, and, ideally, finding ways to make each death look like an accident to get away with the assassinations without detection. The game provides several different pre-made paths to accomplishing each assassination discretely, which are called “Mission Stories,” and offer some of the more creative and amusing means of killing your targets. In one mission, I offed an egomaniac by disguising myself as a member of a mariachi band and tampering with a statue that fell on my target at the perfect moment. In another mission, I rigged a race car to explode as my target was trying to repair it. These moments are challenging to setup and require a ton of patience, but are well worth the trouble when everything comes together perfectly.

Of course, if you’re more the shooting type, Hitman 2 gives you the option to go in guns blazing, but to be honest, if you go that route you’re playing the game wrong, and the game itself seems to agree. Players are punished for killing non-target characters with an XP deduction, and are rewarded for going unnoticed and uncompromised. That said, there is some joy to be had in blowing everything up when things get messy due to a sloppy mistake or an unnoticed witness, and the game provides a large arsenal for fighting back in less discreet ways, from fully automatic weapons to exploding rubber ducks.

In addition to the story mode, players also have access to “Sniper Assassin,” an arcade-like sniper mode that lets you take out your aggression on unaware targets from a mile away, and the all-new “Ghost Mode,” a multiplayer mode that puts two players in parallel instances and challenges them to see which of them can pull off the assassination the fastest. Neither of these modes are as fleshed out or as fun as the story mode, but both offer amusing or interesting experiences that help diversify the gameplay offerings. Finally, the “Elusive Target” program makes its return in Hitman 2, which challenges the player to assassinate an entirely new target that’s only available for a limited time. In this mode, you have a short window of time to pull off the assassination, and only get one shot at it. If you get caught or flub the assassination attempt, the target is gone for good, and you have to wait for the next event to become available. This game mode is absolutely awesome, and gives players a reason to keep coming back to Hitman 2 for free content. The first Elusive Target for Hitman 2 is Sean Bean, which gives players a chance to kill the actor who has been killed off in just about every franchise he’s appeared in.

The only disappointing thing about Hitman 2’s actual gameplay is the lack of new gadgets, weapons, or gameplay features from Hitman (2016). There are a few new toys to play with that only slightly alter the experience, but in a lot of ways Hitman 2 feels like Hitman 1: Part 2. This isn’t necessarily a bad thing for people like me who are just happy to be playing more Hitman, but it’s a little disappointing to see such a talented studio and such an awesome IP seemingly content to coast along instead of innovating and improving upon a great model.

In terms of presentation, Hitman 2 is a bit of a mixed bag. Hitman 2 takes you to some truly gorgeous locations, which are all a joy to immerse yourself in. When it comes to the people occupying these locales, however, it is sometimes a different story. While your targets will all have a unique look and personality that will leave an impression on you, most of the other character models are generic and have a low-level of detail. Wandering through a crowd, you’re unlikely to be bothered by it, but when you walk into a room with 6 identical guards, it stands out as a bit immersion-breaking. As I mentioned before, the visual style of the non-motion “cutscenes” is also a bit of an eyesore. The best moments of Hitman 2’s visual presentation is during the mission briefings that happen before each level, which quickly and efficiently introduce your targets and the scenario you’re being dropped into. In terms of sound design, though, Hitman 2 excels. The voice-acting and sound effects are both top notch, and the game does a particularly good job at making your targets as annoying and obnoxious as possible, giving you that extra motivation to take them out. There isn’t a lot of music in Hitman 2, but what’s there is used only for the most tense or action-packed moments, which adds to the thrill and tenseness of the situation.

It’s a strange thing to find yourself smiling so much while playing a game that has you carrying out a series of grisly murders, but that’s exactly what Hitman 2 does. Whether you’re disguising yourself as a cupcake salesman to get close to a target, or spending an hour to make someone’s death look like an accident, Hitman 2 is the best stealth action game of the year.

You know that jerk online that relentlessly trash talks you after every kill? That guy was probably Travis "Tie Guy" Northup. Competitive, snarky, and constantly wearing a tie, Travis has been writing his opinions about electronic media since he was a teenager, and is pretty much the only person to hold his opinions in high regard.
Related Articles: HITMAN 2
Share
Tweet
Share
Submit