I had high hopes for Raji: An Ancient Epic when I first saw it as part of Nintendo’s recent Indie Showcase. It looked like a fun action game that represented a culture we don’t often see as the focus in games: India. While the game does start out very promising and interesting, it unfortunately gets worse as you progress.

You play as the titular Raji, a circus performer orphan chosen by the gods to rescue her brother from Mahabalasura and defeat the Demons plaguing the land. Watched over by Durga and Vishnu as she explores ancient India, Raji will need to fight enemies with four divine weapons and platform her way through various locations. The story never gets more complicated than that, though eventually Raji is motivated beyond just saving her brother. The game will occasionally dump some mythology on you when you encounter murals of the gods and their exploits which, while interesting, can be pretty confusing if you’re not already familiar with some of the figures. It doesn’t help that the game is also written like it’s an ancient text. Listening to the less than stellar voice acting feels like listening to an audio book of the Bible or Journey to the west in terms of strange grammar choices. 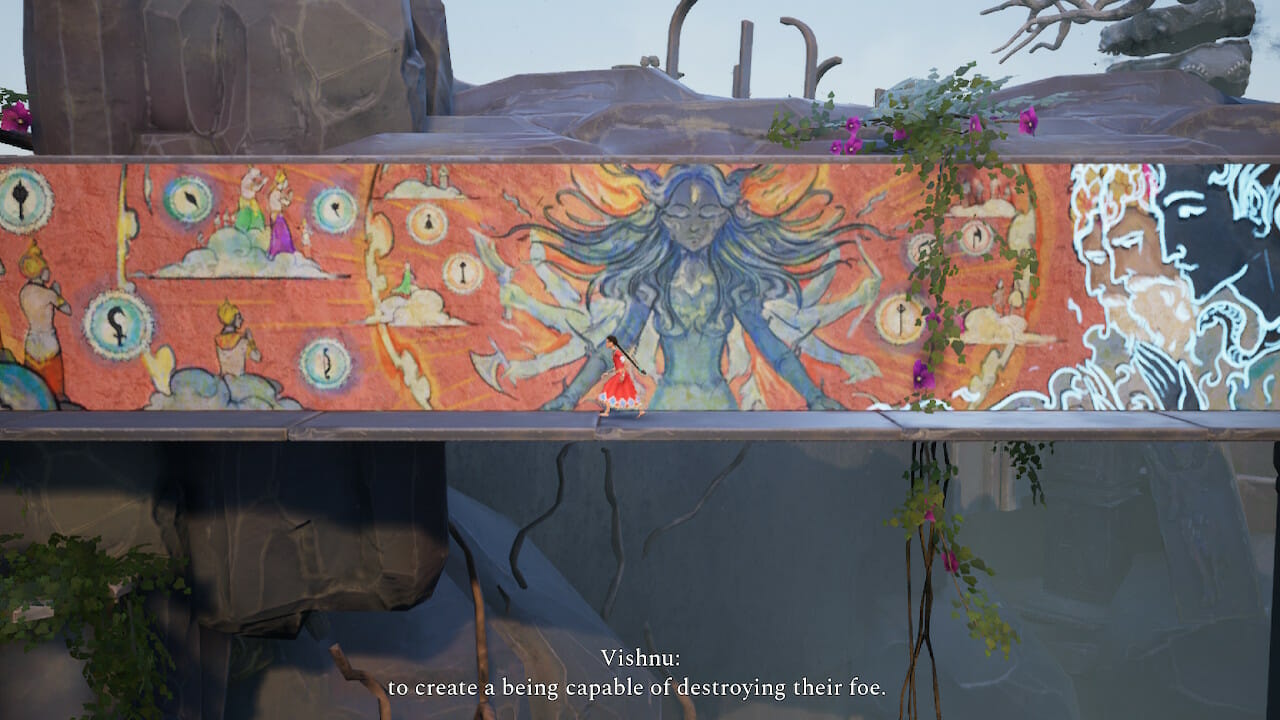 Combat feels similarly archaic, you’ll gain access to four types of weapons- a spear, a bow, a sword and shield, and a chackram. It’s clear that you are intended to swap between them depending on the situation, but I never found any use for the spear once I got the sword and shield. The ol’ sword and board lets you block, which is a god send (pun intended) since enemies don’t let up their attacks, and the bow gives you somewhat reliable ranged attacks. The spear unfortunately outlives its usefulness with no defensive options outside of the standard dodge and you get the chakram right at the end of the game, so it doesn’t have time to really carve out its niche in your arsenal.

You can also attune your weapons to one of three elements- lightning, fire, and ice. These elements each have three skills you can put points into like lightning strikes having a chance to stun enemies or chain between them. You gain points to spend by finding them in small shrines hidden in the levels, usually at a crossroads where one direction leads to progress and the other to secrets. Much like the weapons, I felt the elements essentially replaced each other when you got a new one. For example, once I got ice from Shiva, which can freeze demons for you to instantly kill them, I took all of my points out of the other elements and put them all into the new one. 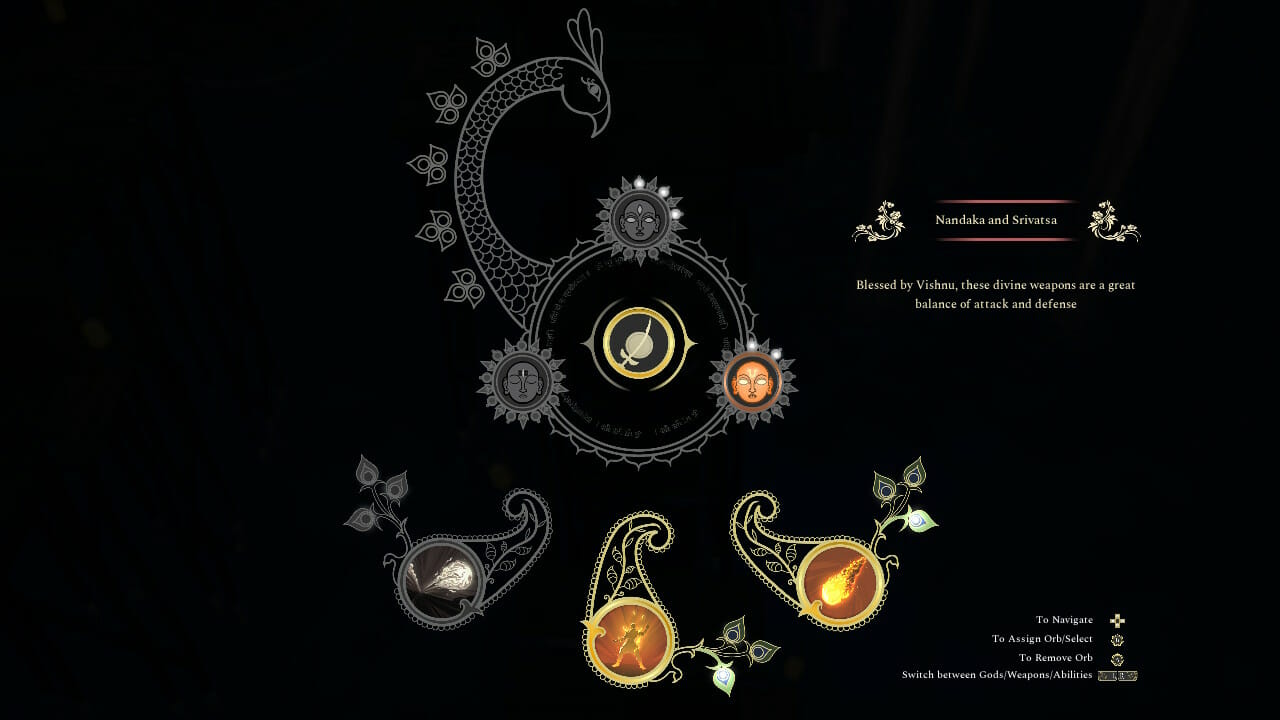 The menu to do this is difficult to navigate as well, so I didn’t want to fiddle with it too often. For some reason, you switch between the three different submenus of weapon selection, element, and trees with L and R, navigate said submenus with the D-Pad, and allocate points with B and remove them with A. It feels like this was designed in the most obtuse way possible, and every time I entered this menu I had to spend 10 seconds or so remembering how to navigate it. Another strange note is that the game’s basic controls are listed incorrectly in the options menu with buttons being mixed up and showing a button for a lock-on which does not exist.

When actually in combat, you perform one of two different combos with Y or X, dodge with B, use your currently equipped weapon’s secondary function with ZL, and use a charge to activate an area of effect special move with ZR. If a wall or pole is in the area you’re fighting in, you can also dodge towards it to then to a cool looking leping attack. Unfortunately the game just kind of forgets about these later on, and in the encounters where you can actually perform these acrobatic attacks you need to spam them just to survive. Overall, combat reminds me a lot of Oninaki, which I reviewed last year. If an enemy can hit you, you’ll often be killed quickly as they all gang up and stunlock you to death. Fortunately, you can do the same to them to an extent, so combat essentially becomes a game of who can land the first hit. It’s a serviceable combat system, not exactly good but not particularly bad either. That doesn’t extend to the three boss fights though, which rely on rote memorization and occasionally luck. The second boss is especially guilty of this and can kill you in one or two hits. This isn’t helped by the fact that the game, including audio, will stutter like clockwork every few seconds in this level. It’s very clear that the game desperately needed more time in the proverbial development and optimization oven. 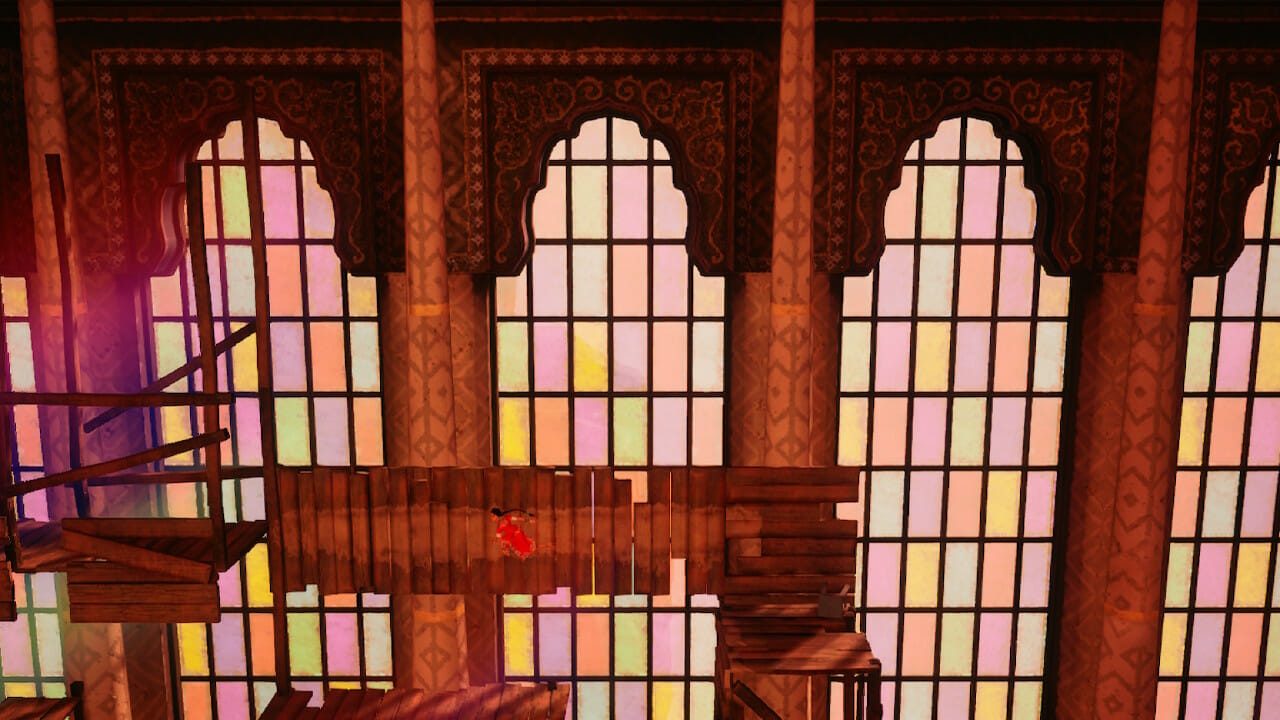 Outside of combat, you’ll be exploring and platforming in a manner very similar to Out of this World or the Uncharted series. It can be fun to figure out where you need to jump or wall run to proceed, but near the end the game tries to up the challenge by placing the camera at strange angles so you can’t really tell where you’re jumping, making these short sequences much less fun and relying on trial and error. Right before platforming becomes a chore, the game ends with a sudden cliffhanger. Unfortunately, the package as a whole makes for a thoroughly unsatisfying experience.

Raji; An Ancient Epic has a lot of potential and a unique style and story, but seems to be actively working against the player’s enjoyment in many ways. While the first level is enjoyable, the rest of the game is plagued with performance issues and incomprehensible design decisions.

David is the kind of person to wear his heart on his sleeve. He can find positives in anything, like this is a person who loved Star Fox Zero to death. You’ll see him playing all kinds of games: AAAs, Indies, game jam games, games of all genres, and writing about them! Here. On this website. When not writing or playing games, you can find David making music, games, or enjoying a good book. David’s favorite games include NieR: Automata, Mother 3, and Gravity Rush.
Related Articles: Indies, Raji: An Ancient Epic
Share
Tweet
Share
Submit