My first encounter with the original Shantae on the GameBoy Color was through a Let’s Play by a small YouTube creator by the name of Brickroad. Eventually, I played it for myself, but those videos immediately enamored me with the game’s wacky charm and unique mechanics. I’ve kept up with the series ever since and played through each entry, from Risky’s Revenge to Half-Genie Hero and eventually the original on the 3DS’ Virtual Console. While Half-Genie Hero was a bit of a departure for the series, Seven Sirens looks to return to Shantae’s Metroid-Vania roots with secrets to discover around every corner.

If you’re not familiar with Shantae, she’s the half-genie (her mother was a genie, her father was human) guardian of Scuttle Town. Using her magical belly dancing, she can transform into various animal forms to explore, solve puzzles, and face off against long-time foe, Risky Boots, Queen of the Seven Seas. Each adventure never takes itself too seriously, and focuses more on humor, but there is an ongoing plot about our heroine’s heritage; as the genies left the human world shortly after she was born. There’s always a large world to discover with Zelda-like dungeons to enter each containing new abilities to help you reach new areas in the world. In Shantae and the Seven Sirens, Shantae and friends are finally taking a vacation to the tourist trap Paradise Island to participate in the first even Half-Genie Festival. After meeting her five fellow guardians, they’re all suddenly kidnapped during their performance. Now Shantae must enter the labyrinth beneath the island, defeat the seven sirens, and rescue her new friends. Oh, and Risky Boots is up to something, because of course she is. 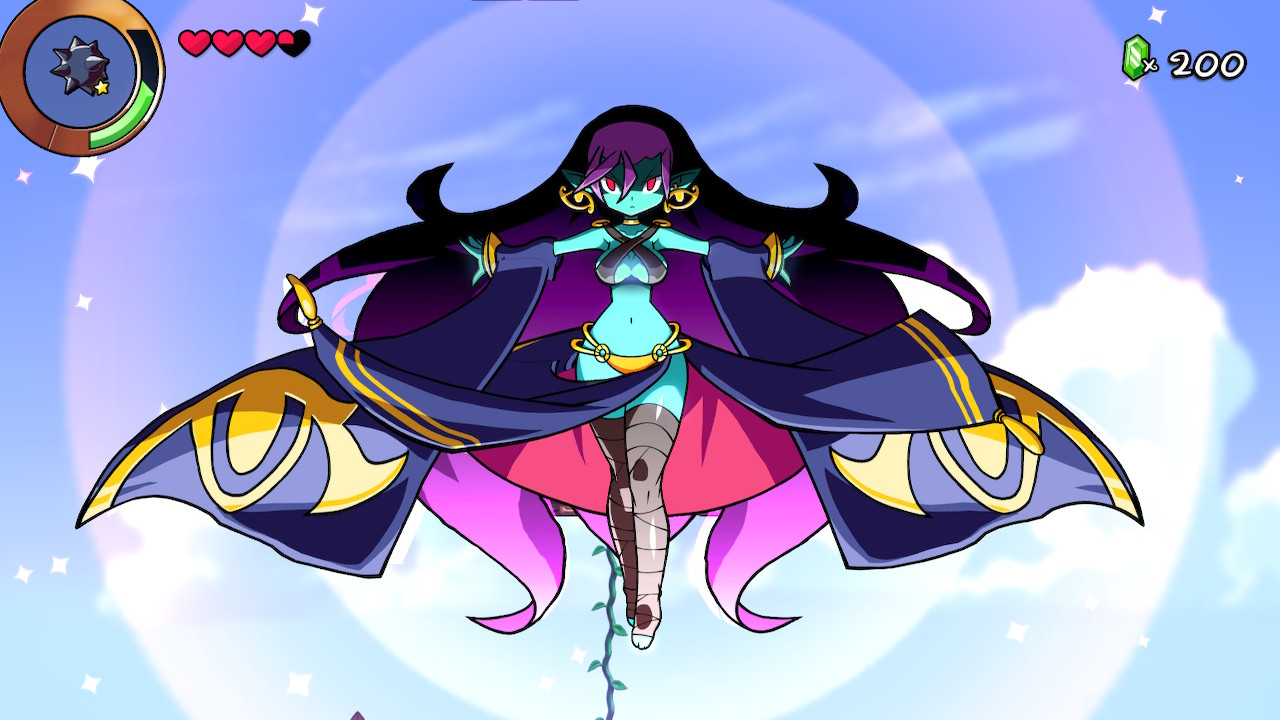 After rescuing each half-genie, they will give you an instant transformation coin. The belly dancing transformations are gone, and these take their place. Now, specific forms are bound to buttons, for example, the newt is bound to ZR to dash and climb up walls or the Squid let’s you jump an additional two times with the B button. Dancing is instead used for four magic spells you acquire, such as revealing hidden objects or electrifying the screen. While I enjoy the convenience these new mechanics offer, I can’t help but feel they take away some of the charm that the old system had. It was fun seeing what cute creature she would become next, though I will admit that the same old Monkey, Elephant, and Harpy transformations in each game were getting tiresome.

The new magic also feels a bit lackluster- you do a little dance, an image appears on screen, and then the effect takes place. It’s the same problem I have with the instant transformations; they’re more convenient but lose a lot of charm that enamored me with the series in the first place. The story and humor have the opposite problem. The returning characters like Sky and Squid Barron seem like parodies of themselves. Sky has always been more serious than say Bolo or Uncle Mimic, but I don’t think she was always this mean or boy crazy. Squid Barron has been itching for the spotlight in the previous games, but I don’t believe he was portrayed as the creepy nerd he is here. Everyone just feels slightly off character in Seven Sirens, and it relies a bit too much on self-referential humor. 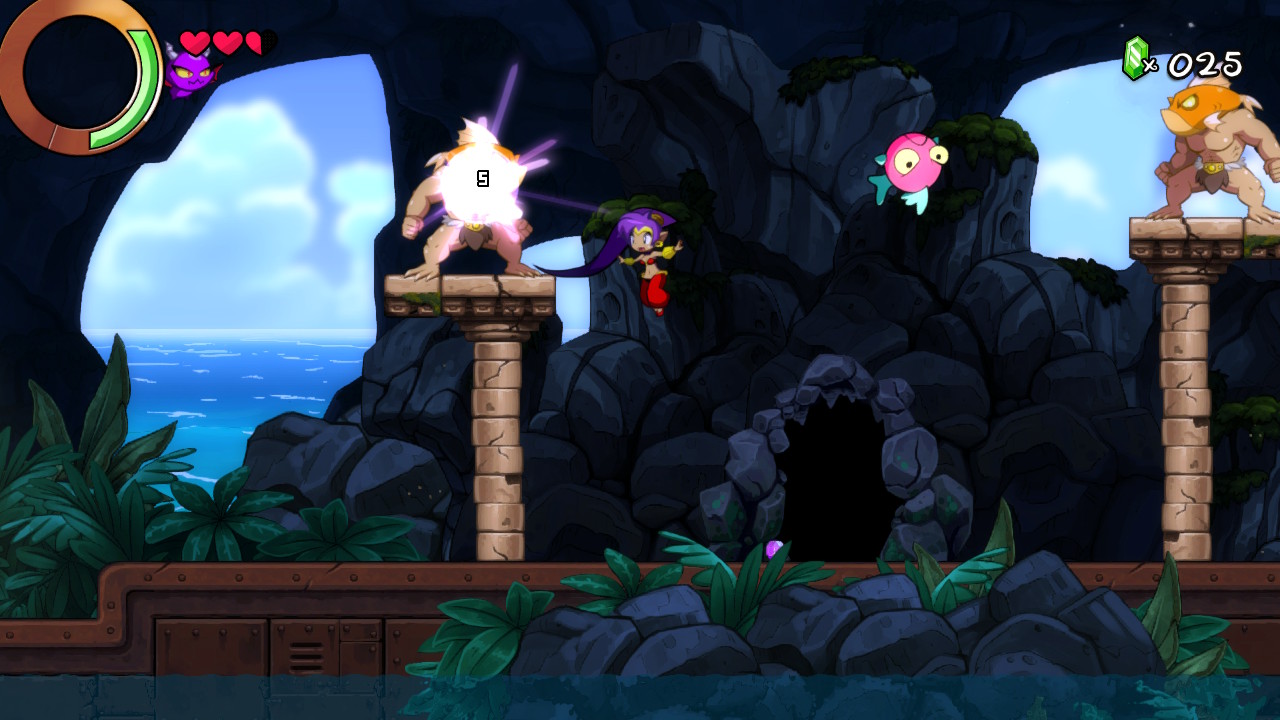 I had a weird sense of déjà vu throughout Seven Sirens, which I initially brushed off as having played two seconds of the game on Apple Arcade. About halfway through the first dungeon, I realized that the game is, in a way, a reimagining of the original. There are three main towns to find, four dungeons which are all interconnected, heck even the cages the half-genies are held in look exactly like those in the first game. The labyrinth that connects the world is new, and the game now makes a point of getting its Easts and Wests correct, but it follows an extremely similar structure. This isn’t inherently a bad thing, but going in I had expected the series to continue to try new things and ideas while expanding on the old ones, and that’s not what Seven Sirens is. I think that’s why I didn’t particularly enjoy this title; it feels like a game I’ve played before, but with less charm and character. Even the soundtrack sounds like it’s trying to imitate what came before. The platforming is much tighter than the previous game, there are new animated cutscenes highlighting parts of the adventure, and there are tons of new, cute characters to meet. By all accounts I should have loved Seven Sirens, but what I actually felt while playing was… bored.

There’s nothing substantially new in the game. We’ve seen the convenience offered by the instant transformations before in Pirate’s Curse with Risky’s borrowed gear, and many of the dungeons’ ideas and mechanics have appeared in the series before, like the eyeball platforms and cannon puzzles, and the Pike Ball item is still way too overpowered. If you’ve played every game in the series like me, you may be disappointed by this newest installment. But newcomers will still find an above average platformer, even if it’s lacking the heart that made me love Shantae in the first place.

Shantae and the Seven Sirens

Fans of the series may feel a sense of déjà vu when playing through the extremely short Shantae and the Seven Sirens. But it’s still a game worth your time, even if it doesn’t meet the high bar set by the rest of the series.

David is the kind of person to wear his heart on his sleeve. He can find positives in anything, like this is a person who loved Star Fox Zero to death. You’ll see him playing all kinds of games: AAAs, Indies, game jam games, games of all genres, and writing about them! Here. On this website. When not writing or playing games, you can find David making music, games, or enjoying a good book. David’s favorite games include NieR: Automata, Mother 3, and Gravity Rush.
Related Articles: Indies, Shantae and the Seven Sirens
Share
Tweet
Share
Submit